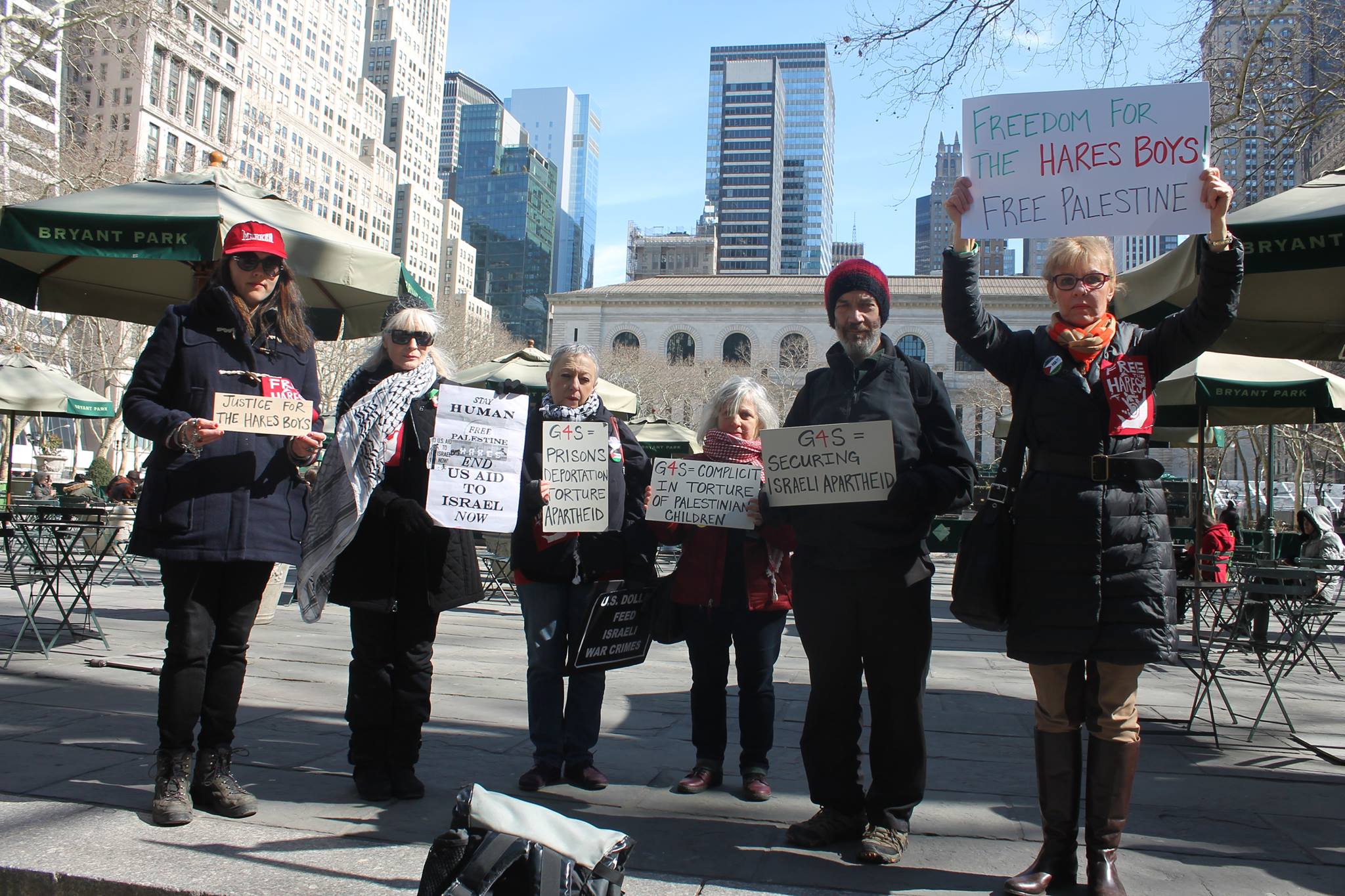 Tell the United Nations to end its contracts with G4S, a British-Danish security firm that supports Israeli checkpoints, detention centers, military and security forces, and prisons, and demand Israel release the Hares Boys, fine Palestinian teenagers blackmailed into accepting 15-years prison terms and exorbitant ‘fines’ for a crime that never happened, and all Palestinian political prisoners.

The five teenagers are being sentenced to 15 years in prison and are to pay a total of NIS 150,000 (~US $39,000 or €35,000) to the Israeli authorities. Failure to provide the exorbitant sum would, it is implied, result in more years of prison added to the boys’ sentences.

Ali Shamlawi, Mohammed Kleib, Mohammed Suleiman, Ammar Souf, and Tamer Souf have been kept in prison for 2 years and 8 months and are now being sentenced.

The five teenagers (16-17 years old at the time) from the village of Hares (Salfit governorate, West Bank, occupied Palestine) were kidnapped from their homes by the Israeli army in March 2013. The teens were accused of throwing stones at illegal settler cars, one of which drove under a truck that was parked along Route 5 near the village of Hares. The driver’s children were injured during the accident and one of them died two years later after pneumonia complications. The boys denied throwing stones but were forced to sign ‘confessions’ following torturous interrogations at the hands of Israeli secret services. There was never any evidence of the boys’ guilt but it is sadly a reality in the Israeli military court system that does not comply with due process and convicts Palestinians at a 99.7% rate.

After almost 3 years of routine hearings at Israeli military courts, where the boys were initially accused of ‘attempted murder’, they were told on 26 November 2015 that they are now being charged with manslaughter and are being sentenced to prison terms of 15 years, provided their families pay ‘fines’ of NIS 30,000 [US $7,750 or € 7,100] each by the deadline of 28 January 2016. Failure to pay the amount requested by the Israeli military court would, it is understood, result in each boy’s sentence being prolonged, possibly to at least 25 years in prison.

There is no other way to describe this situation the five teens and their families have endured other than as criminal activity on behalf of the Israeli system of ‘justice’. Pressing the families to agree to a court ‘deal’ and threatening them with harsher sentences if they don’t accept is nothing less than extortion. Demanding that families pay large sums of money as a ‘fine’ or a ‘compensation’ to the occupying power is nothing less than a demand for ransom.

G4S, the world’s largest security company and second-biggest private employer, equips and maintains the Israeli detention centers and jails where Palestinian political prisoners, including children like the Hares Boys, are held and tortured, as well as the occupation forces and infrastructure that routinely massacre Palestinians while holding millions under military rule.

While professing commitment to both Palestinian rights and ethical contracting, UN agencies lavish G4S with lucrative business deals, after seven months of appeals by Palestinian human rights groups to end them, and despite the company’s participation in Israeli atrocities.

Join us to answer a united appeal by Palestinian prisoners for escalated boycotts of G4S, and to build a new global campaign against the UN’s support for this notorious prison and occupation profiteer.