Home News From Venice to Jenin, calls for justice for Omar Nayef Zayed 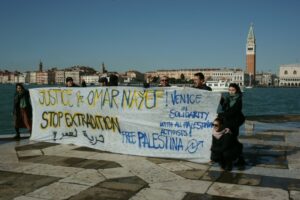 Activists in Venice organized an action in support of Omar Nayef Zayed, the former Palestinian prisoner now sought for extradition by Israel from Bulgaria, on Thursday, 18 February.

Zayed, who escaped Israeli imprisonment in 1990 after a 40-day hunger strike, has lived in Bulgaria for the past 22 years; he has a Bulgarian wife and three Bulgarian children. He is now being pursued, since December 2015, by Bulgarian police and officials at the request of the Israeli state, which has demanded he be turned over for extradition and the reimposition of a life sentence.

The Bulgarian authorities have not succeeded in capturing Zayed to date; however, he remains at high risk. In addition, his case sets a dangerous precedent for other Palestinians in Europe, as Israel is attempting to invoke the Council of Europe’s treaty on criminal extradition to seize this former Palestinian political prisoner.

The Association Ya Basta! Edi Bese! displayed a banner on the island of San Giorgio, where, in 1980, the European Council noted the “recognition of the legitimate rights of the Palestinian people.” Activists raised a banner with the words: “Justice for Omar. No extradition!”

At the same time, Palestinians in Jenin gathered to demand justice for Zayed, originally from Jenin where he grew up and lived his entire life until his arrest by Israeli forces in 1986. They demanded that the Bulgarian government stop acting as police and security forces of the Israeli occupation attempting to jail a Palestinian prisoner accused of struggling for the freedom of his people.