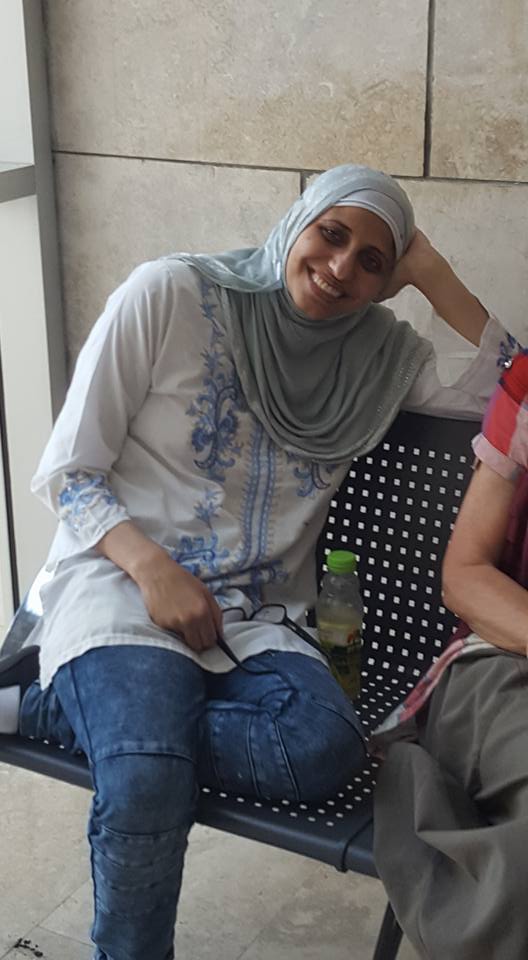 The following report on the 25 July court hearing for and jailing of Palestinian poet Dareen Tatour is written by Yoav and reprinted from Free Haifa. Tatour, a Palestinian citizen of Israel, was imprisoned for three months followed by over six months of house arrest over “incitement” allegations based on her poetry, posted online in a YouTube video and shared on Facebook.  She was forced into house arrest near Tel Aviv far from her village of Reineh; her brother and sister in law needed to drop work and school in order to serve as “guards” 24/7, and she is forbidden from access to the internet. Tatour must wear an electronic ankle bracelet at all times. Her case has received increasing attention and solidarity, and the support of hundreds of prominent international literary figures such as Alice Walker, Eve Ensler, Marilyn Hacker, Viet Thanh Nguyen, Dave Eggers, Susan Abulhawa, and many others. Her case, one of hundreds of Palestinians facing arrest and imprisonment for writing on Facebook, has sparked outrage and highlighted the long history of Israeli colonial erasure of Palestinian cultural production, from the assassination of Ghassan Kanafani to the imprisonment of Mahmoud Darwish, Tawfiq Ziyyad, and Samih al-Qasim.

After lengthy struggle regarding returning Tatour to Reineh, the prosecution conceded that she could be held in house arrest in her home village. However, on 25 July, rather than returning to her hometown, Tatour was instead imprisoned after a for-profit ankle-bracelet company failed to produce an official report that her transfer would not cause a problem. A new hearing will be held this morning, Tuesday, 26 July. The Free Dareen Tatour facebook page will carry the latest updates. The Free Haifa article follows:

We invited everybody to celebrate the return of poet Dareen Tatour to Reineh today, after more than three months in prison and more than six months in house arrest in exile in Kiryat Ono near Tel Aviv (more than 100 km from her home). Yes, we knew that she will still be in house arrest under harsh restrictions: confined with volunteer guards to the house, 24 hours a day, 7 days a week, with an electronic device attached to her ankle monitoring all her movement and prevented from any access to the internet. But at least she will be at home, surrounded by family and friends.

But after a prolonged drama in the Nazareth court the result was that Dareen was arrested and returned to prison. She will probably spend the night in the filthy cells of the Jelemeh detention center, where she spent the first month of her detention. Tomorrow we will have another hearing in court, but as things go we can’t be optimistic until we will see Dareen fully free.

But what happened today in the Nazareth court?This cruel attempt to break Dareen’s spirit just as she expected her situation to improve reminds me of the case of Bilal Kayed. Bilal, a member of the Popular Front for the Liberation of Palestine, was sentenced to 14 and half years in prison for resisting the occupation. On the day that he had to be released, June 13, 2016, he was transferred instead to administrative detention for another six months, a period that can be extended arbitrarily and indefinitely. Today Bilal is on the 40th day of hunger strike against his administrative detention, and there are many demonstrations in solidarity with him against the breaking of the few rules that were still respected in the relations between the occupation and political prisoners.

Before our court hearing started, we were given a devastating evidence to the ground truth of the reality of occupation that is the real background to Dareen’s saga. Two young workers from the West Bank were brought before the judge on the accusation of crossing the walls illegally in search of work. He casually remanded their detention and sent them back to prison in less than 2 minutes, like somebody that eats a nut and throws the shell behind his back.

The current request to alleviate Dareen’s detention conditions is almost three months old. It took a month to set a date and few more weeks to make the initial hearing, where the prosecution objected to the very hearing of the request. As an alternative they insisted that a special parole officer will examine the suitability of the proposed new guards to be with Dareen, which brought us up to last Monday, July 18.

In the meantime the international pressure to release Dareen mounted, with hundreds of poets and writers from all over the world signing a petition in her defense. The prosecution softened its position a bit, now agreeing to Dareen’s return to Reineh. But still another week was allocated for the adjustment of the electronic device to work in Dareen’s house in Reineh – and the hearing was postponed to today, Monday, July 25.

In the meantime Dareen’s lawyer prepared seven proposed volunteer guards – much more that the number usually required, as he had a long experience of the prosecution failing any proposal to alleviate the detention conditions. Judge Hana Sabagh, the vice president of Nazareth low court, agreed to hear only four custodians. They all passed the interrogation perfectly. But then the judge noticed that three of the four guards, Dareen’s father and two brothers, work, and only her mother will stay with her at daytime. And what will happen if her mother will have to get out? The next in line were Dareen’s sisters in law – but they also work outside the family house. In the end the judge agreed to accept as a fifth guard one sister in law that works part-time. I wonder about what “dangers to the public” the judge was thinking when he invested all this time to create a perfect shield around Dareen that is never applied to really dangerous criminals.

Then it came out that the approval from the operators of the electronic surveillance device was missing. First everybody thought that it was only a problem of communication. The court’s clerks are still on strike and they put off the fax machine where such documents are regularly sent. The judge even tried to show leadership and said that “we will find a way to get the approval without breaking the strike”.

But when the lawyer called the operator again it became clear that the approval is not ready. It is a private for-profit company that received the responsibility for operating electronic handcuffs from the government through a special contract. They were supposed to do their job within five work days – and that’s why the Judge postponed the hearing for a whole week. But they visited Dareen’s house only yesterday. And though the professional team that checked the place said that everything is OK, today on the phone they insisted that, according to their contract, they have another five days now to write their conclusions.

Abed, Dareen’s lawyer, suggested that Dareen will be allowed to go to Reineh anyway, until the final approval will come. After all, she was allowed to be with her family on Eid Al-Fitr (albeit only for one day), and once again when there were court hearings day after day. They Judge objected, saying that he couldn’t allow Dareen to go to Reineh for a few days least there will be a negative reply from the operators of the device and he will be forced to send her to prison…

Dareen told the court that there is no way that she will go back to Kiryat Ono. The Judge didn’t wait to hear why and ordered the guards to take her. But then everybody stood up and shouted, and the judge said he will set the next hearing for tomorrow, maybe the operator will make up his mind in the meantime.

Dareen’s lawyer tried to convince the judge that if there is only one night until the next hearing, he doesn’t have to be any braver than the previous judge that let Dareen spend one night at home before. But then the lawyer for the prosecution began to shout, saying there is no reason to allow this. She mentioned the fact that Dareen didn’t infringe in any way the conditions of her detention over the last half year as a proof that there is no problem with her staying more in Kiryat Ono. Judge Sabagh apparently decided that he’s more afraid from the prosecution’s fury and ended the hearing without any decision except for setting the next hearing for tomorrow at 13:00.

Dareen went out and inspected her options. After some time she went back to the judge with her family and lawyer and repeated her position that she simply can’t go back to Kiryat Ono. The judge ordered the court guards to arrest her and give her to the police. Now Dareen is in prison again for very good reasons: As the judge said, he wouldn’t want to arrest her if there will be a negative response from the operators… and as the prosecutor said, she never infringed the conditions that were imposed upon her… The State of Israel was spared another great threat to its sacred security!