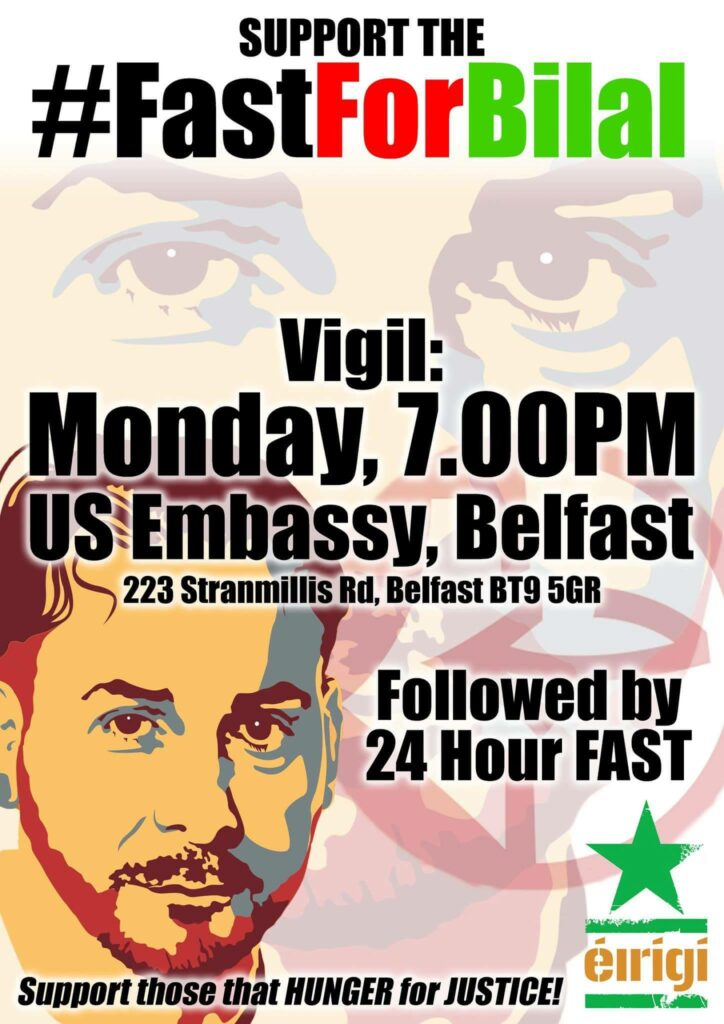 The Irish Socialist Republican party Éirígí has announced that it intends to stage a 24 hour fast inSolidarity with Palestinian Hunger-Striker Bilal Kayed. The fast is to take place outside the US Embassy in Belfast, Ireland, starting with a vigil on Monday at 7.00PM (Local Time)

Speaking from occupied Ireland, Éirígí Chairperson Brian Leeson said, “It is with great dismay that we hear that Bilal has endured over 67 days without food, as he fights the unlawful ‘administrative detention’ policy enforced upon him by the Israeli Government. The Zionist regime is implementing the policy as a form of internment, which still blights the Irish people to this day. Irish Political prisoners can be held without trial for months on end, and indeed years.”

“Bobby Sands spent 66 days on hunger strike before his death on the 5th of May 1981. Bilal Kayed has now surpassed that, and so is without doubt in the critical stages of the protest. We understand that he is unable to move or talk, and has been moved into an intensive care unit. It is in light of these circumstances that political activists here in Ireland have decided to take this action.”

Concluding, Leeson added, “We join the international calls for the ending of administrative detention as a policy, and we call on all Irish political parties and organisations to fully implement the Palestinian calls to Boycott israeli goods, to Divest, and to Sanction the zionist organisations complicit in the wholesale genocide of the Palestinian people.”