Home Events 9 December, Philadelphia: Rally to Save Mumia’s Life and Demand his Freedom 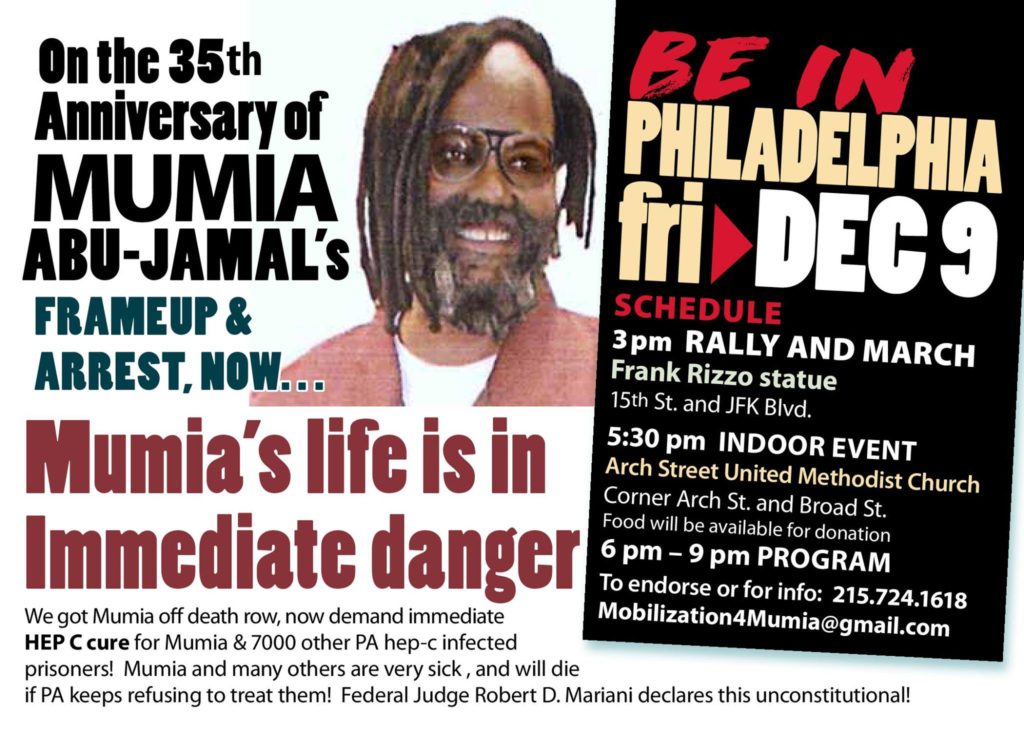 3-6pm – Rally outside next to the hated Rizzo statue across from City Hall in Thomas Paine Plaza
6-9pm – Indoor event at Arch Street Methodist Church, Arch & N. Broad Street streets (Food will be available for a small donation)

The people got Mumia Abu-Jamal off death row but he is still in prison serving life in prison, or slow death sentence.

– Abu-Jamal is experiencing increased symptoms of the deadly hepatitis C virus. His deteriorating health is again approaching alarming levels as occurred in March, 2015 when he was rushed to the hospital unconscious. He will die sooner than necessary unless he and 7,000 other hepatitits C infected prisoners are allowed to recieve the cure for the deadly disease.

– A Federal Court decision (Abu-Jamal vs Kerestes) on August 31 declared it was unconstitutional for the Department of Corrections to refuse to give hep C-infected prisoners with medicines boasting a 95% cure rate. For Mumia Abu-Jamal and nearly 7,000 other prisoners with hep C, prison authorities continue to refuse effective treatment until inmates are near death. Why is the DOC continuing its deadly protocol of “deliberate indifference”?

– Prisoners at Mahanoy Prison had to bathe in dirty, brown water, and were limited to inadequate rations of drinking water, for weeks until a few days ago. Is the water safe to use, especially for hep C inflicted prisoners with skin complications? Why does the DOC do so little to protect prisoners from unsafe water at SCI Mahanoy, SCI Frackville, SCI Graterford and other prisons?

– A new lawsuit by Abu-Jamal’s attorneys has been filed, based on a recent Supreme Court decision (Williams vs PA) that a prosecutor in a case cannot sit as a judge over the same defendant he prosecuted. A ruling in Abu-Jamal’s favor would reopen all of the legal decisions in the case made since 1998. Acting as prosecutor and later Judge for both Abu-Jamal and Terrence Williams, why did former PA Supreme Court Justice Ronald Castille refuse to recuse himself?