Samidoun Palestinian Prisoner Solidarity Network expresses its strongest solidarity with Palestinian refugees in Lebanon struggling for their civil and human rights as well as their right to return to their occupied homeland, Palestine. In the past days, thousands of Palestinian refugees have taken to the streets of the refugee camps under banners demanding dignity and justice, a struggle that is continuing now.

The protests were sparked by the actions of the Lebanese Minister of Labor, Kamil Abu Sleiman, to impose new registration requirements on Palestinians working in Lebanon or operating their own businesses. Palestinian refugees in Lebanon, who have been present since 1948 when they were expelled from their homeland, Palestine, in the Nakba, have long faced severe discrimination and repression by the Lebanese state and, in particular, right-wing political parties and militias. It should be noted that Abu Sleiman represents the Lebanese Forces party, a right-wing political movement long known for its anti-Palestinian and anti-Syrian policies.

It is no coincidence that the latest attack on Palestinians in Lebanon comes amid ongoing Israeli threats of war against Lebanon; U.S. plans to restructure the region; intensified drives to normalization with the Israeli state by the reactionary Arab regimes in partnership with the U.S.; cuts to the funding of organizations like UNRWA, providing support to Palestinian refugees in Lebanon who are excluded from government services; the ongoing siege on Gaza and the massacres against Palestinian refugees marching there for their right to return and imperialist war drives against Iran. Much the same, the rising of Palestinian refugees is essential to the resistance against Zionism, imperialism and Arab reaction.

“The uprising in the camps is a clear protest against the continuous and prolonged state of oppression, exclusion and siege imposed on our people living in the camps in particular, an expression of the rejection of injustice, racism and government policies that deal with the Palestinian presence in Lebanon as a “security file.”…The protests that we witness in the camps of Beirut, in the North and the South reflect the long-term struggle of our people in Lebanon to defend their rights and to confront the policy of racism and marginalization practiced by the Lebanese sectarian regime against the Palestinians and against foreign workers and refugees on a sectarian and reactionary basis. These serious and angry protests in Lebanon remind us of the fact that the Palestinian camps, the reservoir of the revolution, have become miserable enclaves for the most oppressed and impoverished classes in Lebanon, of all nationalities. And these classes today are ready for uprising and even revolution, confronting these realities and regaining their role in the Palestinian national movement and in the resistance, in order to complete the project of return and liberation.”

Palestinian organizations in Lebanon have expressed specific demands, including:

Samidoun urges all supporters of Palestine and the struggle of Palestinian refugees to return to their homes and lands to support the protests taking place in Lebanon. These protests reflect an ongoing mobilization to defend Palestinian rights and the Palestinian people against a comprehensive attack – and to support their steadfastness to move towards victory and liberation.

1. Organize events or actions in your area to support Palestinian refugees in Lebanon. Hold a protest, gathering or event in a public square. You can also include support for the Great March of Return in Gaza as part of these events. Please contact samidoun@samidoun.net to tell us about your events! 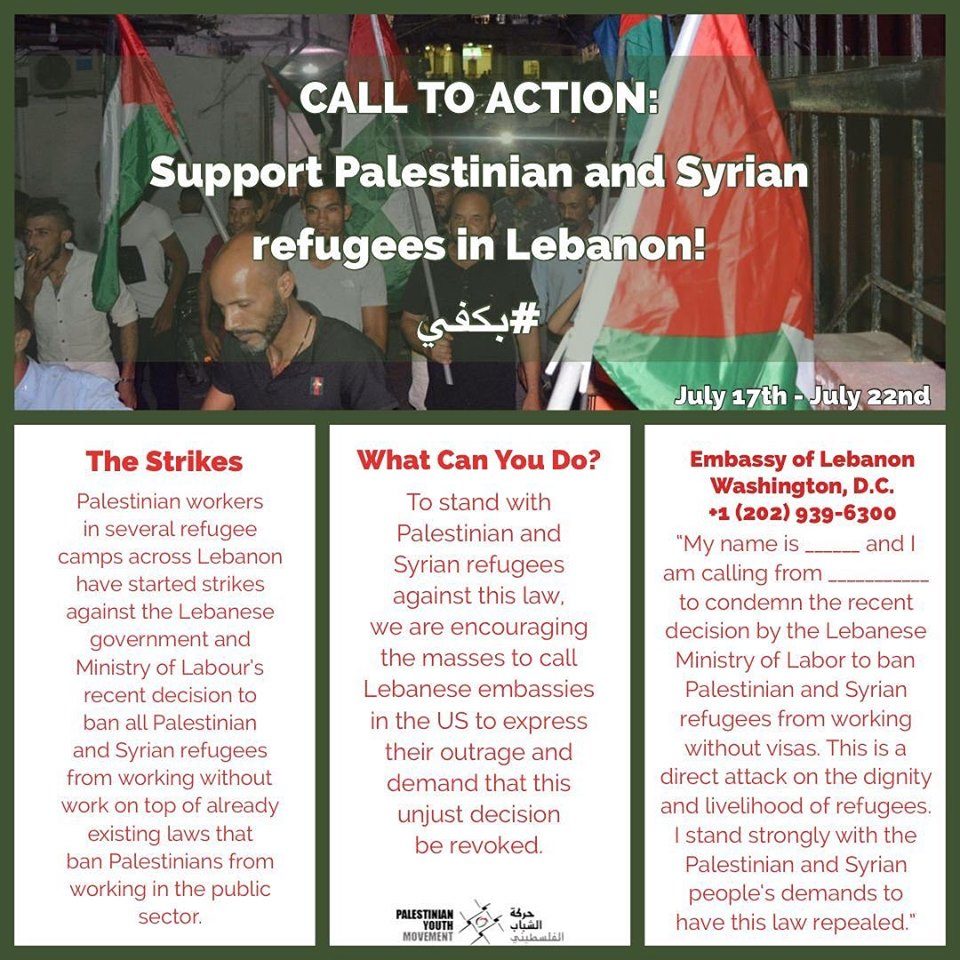 Palestinian camps in Lebanon have witnessed popular movements in response to the implementation of the discriminatory labor law which aims to “limit foreign labor” as the Lebanese Ministry of Labor calls it. This campaign has targeted our interests and work as Palestinian refugees in Lebanon, increasing our suffering due the deprivation our most basic civil and social rights. Most of the successive Lebanese governments have not spared any effort in increasing the suffering of our steadfast people in Lebanon. The Lebanese government has not yet defined the legal status of the Palestinian refugee in Lebanon and as such is treated sometimes as a refugee and others as a stateless individual.

As such, our people in the camps of Lebanon have moved in demand of the following:

Additionally, we call upon Palestinian factions to unite around the demands of our steadfast people in Lebanon. We call upon the Lebanese people who are the first supporters of Palestine and its people to support these popular movements and to stand with our rightful demands.

We call upon our people in occupied Palestine and in the Arab nations and in Europe and the United States and across the globe to support us in our demands by organizing events and mobilizations.

We as Palestinian people reaffirm our right to return to Palestine, all of Palestine, and reject resettlement and all conspiracies aiming to eliminating our Palestinian cause.

One united impenetrable front for the rights of our Palestinian people