Home Articles The Right to Health and Coronavirus Pandemic: Profit over Human Life by...

The following article was originally published at Bisan Center for Research and Development, where Ubai Aboudi serves as Executive Director. He has been imprisoned since November 2019 – sparking international protest and pressure, including among his colleagues in Scientists for Palestine  – and continues to be held inside Israeli jails. As the Bisan Center noted in their introduction to this piece, “Despite his arrest, Ubai is still a critical part of the productivity and the work of the Center.” We urge all readers of this article to join the actions to free Ubai Aboudi and his fellow Palestinian prisoners. 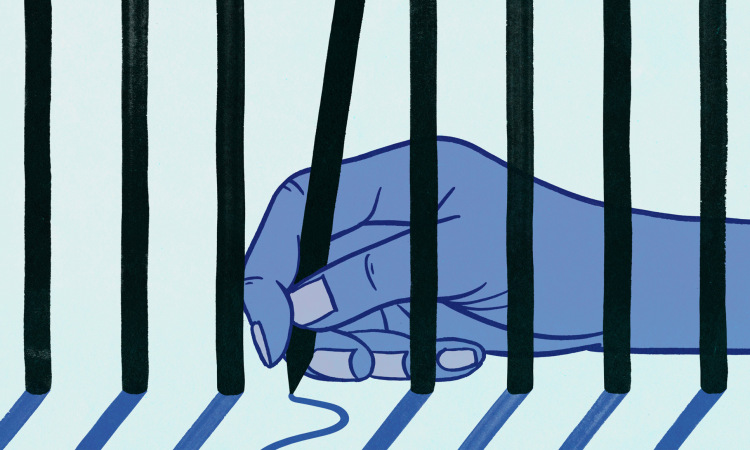 I will not start my article with a big speech on the right to health or even the right to enjoy suitable healthcare; nor will I remind you that they are both fundamental rights guaranteed by the Universal Declaration on Human Rights. This is indisputable and does not require renewal of a social contract that includes this essential term in human existence, which emanates from the right to life and is a natural extension of it. Thankfully, science has made great advancements in the field of medicine, as human life can be easily prolonged and its quality improved despite old age. Now that we are in the twenty-first century, and after all the medical advancements we have made, we cannot abandon this elixir of life and accept sudden death due to the lack of treatment or suitable healthcare.

The coronavirus (COVID-19) pandemic is no different from other pandemics in the history of human life. Each pandemic is unclear and concerning in its early stages. It casts its shadow over a certain region paralyzing it, and then it victoriously spreads to other regions, turning people’s everyday lives to nightmares. The atrocity of such a pandemic increases when it takes the life of a person whose body has already been anguished by a handful of chronic diseases, as such completing the circle of life. Although the virus is devious, it is not irremediable. It can be tamed if suitable healthcare is provided to those afflicted by it until a vaccine to defeat and control the spread of the virus is found.

Normally at this stage and as a result of this pandemic, people will lose their lives due to the lack of healthcare provided to them. Such a death does not only take the lives of millions of impoverished people in developing countries, but also takes the lives of citizens of wealthy countries as well who are either excluded from the healthcare system in their countries or found that the healthcare system in their countries is not qualified for such medical emergencies. Palestinian prisoners at Israeli prisons possibly know best the meaning of lack of healthcare when needed, as many of them fell martyrs due to medical neglect by the Israeli occupation authorities.

The coronavirus pandemic has revealed the weakness of the globalized neoliberal system, or as Samir Amin calls it, “unbridled neoliberalism.” This system became dominant in the world after the collapse of socialism in the late 1980s and early 1990s. The system is based on absolute or semi-absolute free international trade. Capitalism has transcended the traditional borders of countries and opened markets on a globalized scale. Internet, social media and transportation developments mean that globalized industries depend in their production on relatively long value chains that extend across countries or continents, from the provision of raw materials to providing consumption markets. At this time, there is talk about freeing the service sectors to international trade as a new stage of global free trade.

The reality is, this pandemic and the resulting need for the health sector has revealed the reality of the globalized neoliberal system. The weak investment in the public health sector has also been revealed, even in wealthy countries such as France, Italy and the United States, since a number of services provided by the public sector have been transferred to the private sector under the premise of restructuring and realizing economic efficiency. Nevertheless, the story is different in developing countries, as their health sector suffers from weak capacities to provide services, and from poor services overall, which makes it unqualified to meet citizens’ needs in normal times let alone in an emergency.

One may see the worst point to which humanity has arrived when you track the international map of the division of work and production. You will see that the production of pharmaceutical and medical supplies were also included in such a division. China and Turkey specialized in the production of masks and medical protection tools, while India specialized in the production of basic materials used in pharmaceutical production. As the coronavirus has become a global crisis, the demand for medical supplies, ventilators and resuscitators has increased. As such, many countries have found themselves short on medical supplies in general, while the quantities that can be exported to the world have been limited or prevented altogether. This global shortage has resulted in the exacerbation of the health crisis in countries struck hard by the virus, and has led to the increase in the number of infections and deaths around the world.

With the increase in the bidding war and piracy over medical supplies, while turning their back on countries most in need, we can clearly see the hideousness and ethical degradation that the current global system has reached in facing this pandemic. Other phenomena that accompanied free trade in medicine and medical supplies, restructuring and reducing public expenses were provided the international monetary institutions, such as the World Bank and International Monetary Fund. Such institutions have provided advice and put pressure on countries to change their spending patterns on social sectors, including the health sector, in order to reduce the deficiency in state budgets and realize higher growth rates.

Such recipes were adopted by both wealthy and poor countries, we can even say that the neoliberal theory has become a religious belief for the elite ruling most developing and advanced countries. For example, the US President Donald Trump has worked to cancel even the mild approaches to a comprehensive healthcare system adopted by his predecessor Obama, leaving millions of US citizens without medical coverage during crisis. In the last three decades, France and Italy have lose one hundred thousand and ninety thousand hospital beds respectively as a result of reduced government spending on the health sector based on the recommendations of neoliberal economists. It is worth noting that an entirely new branch of economy has emerged, which is the economy of health, that made the health sector subject to profit and loss calculations in accordance with the neoliberal theory in economy. This means that the supply and demand equilibrium is taken into account in deciding prices, without even considering that human life is more precious and important than any economic calculations.

It is worth noting that monopoly practices by major pharmaceutical companies during the spread of AIDS in Africa is the closest example. The said companies refused to reduce their prices or allow African companies to produce alternative medicines that prevent the transfer of the virus from mothers to their fetuses during pregnancy. They refused to do so under the premise that they need to protect their intellectual property and economic returns. The cries of French doctors on allowing them to use hydroxychloroquine and azithromycin – two cheap and widely available medicines that have shown efficiency in treating COVID-19 according to many specialists – to treat patients with coronavirus serves as proof of the extent to which French pharmaceutical companies intervene in the health system to attempt to market that expensive antiviral medications.

We can study the conditions of the Palestinian Authority in terms of our current reality, as its health sector’s inability to face challenges and crises is evident. According to a report by the Coalition for Accountability and Integrity-AMAN on developmental spending in social sectors issued in 2019, the Palestinian health sector suffers an annual funding gap estimated at 1,400 million ILS, which has negatively reflected on its ability to respond to the people’s medical needs. To meet such needs, a system of medical transfers to Israeli and regional hospitals was created. This system is mainly based on purchasing medical services from abroad instead of building capacities in the Palestinian healthcare system and nationalizing services. The PA has spent an average of 700 million ILS annually in the last two decades on this transfer system. The funding gap in the health sector could have been covered by rechanneling funds from the governance sector, which consumes 43% of the PA’s annual budget, particularly reforming the security sector that consumes an annual budget of 5.8 billion ILS. Different analyses show that this budget can be cut by half through restructuring the security sector, merging different security apparatus and terminating the overlap between the activities of security services. This would meet the sectoral needs in the right to health and provide an excess of funds to realize economic development.

The current crisis poses the end of the global neoliberal system that we have seen throughout the past three decades. This system has resulted in an annual global economy of $85 trillion and a global debt of $250 trillion without solving poverty, unemployment or climate change. Moreover, this system has realized a complete failure in facing the first globalized health crisis seen by modern humanity. This promises an end to “privatized development”, which is the development that is controlled by the private sector without any central plan, leadership or guidance, as opposed to the state’s role in leading and guiding the development process in the country. “Privatized development” is limited to economic development without considering the essence of the development process, which is people. It attempts, through the terminology it uses, to present partnership between the public sector, private sector and civil society, to limit the state’s role and give way to the concepts of profit and investment. As such, the state’s role has become complementary to the private sector and citizens have abandoned the concepts of the right to health, food, education and life. The state is no longer required to provide such rights, but rather the market provides them in accordance with the concepts of profit and loss. As long as the private sector directs development, its investments that are governed by the principles of profit and competition in the context of free international trade will not be directed towards improving the conditions of humanity, but rather to increase the capital of its holders.

In an irrational global system where billionaires exist alongside starving people, where the wealth of the eight wealthiest people in the world is equal to the wealth of the poorer half of the population; changing the system to a more humanitarian system becomes an urgent necessity. Finding a system that redistributes wealth produced by humankind in accordance with our needs as people and based on the notion that we are part of a greater ecological system. I am reminded here of Barry Commoner’s statement: “Here we can learn a basic lesson from nature: that nothing can survive on the planet unless it is a cooperative part of a larger global whole.”