Samidoun Palestinian Prisoner Solidarity Network fully supports this initiative taken by a range of Palestinian community, Palestine solidarity, student and social and racial justice organizations throughout Florida for a series of statewide demonstrations on Sunday, 5 July. We encourage all supporters of justice for Palestine and members of the Palestinian community to come out to these actions – or join the at-home actions provided below by the organizers: 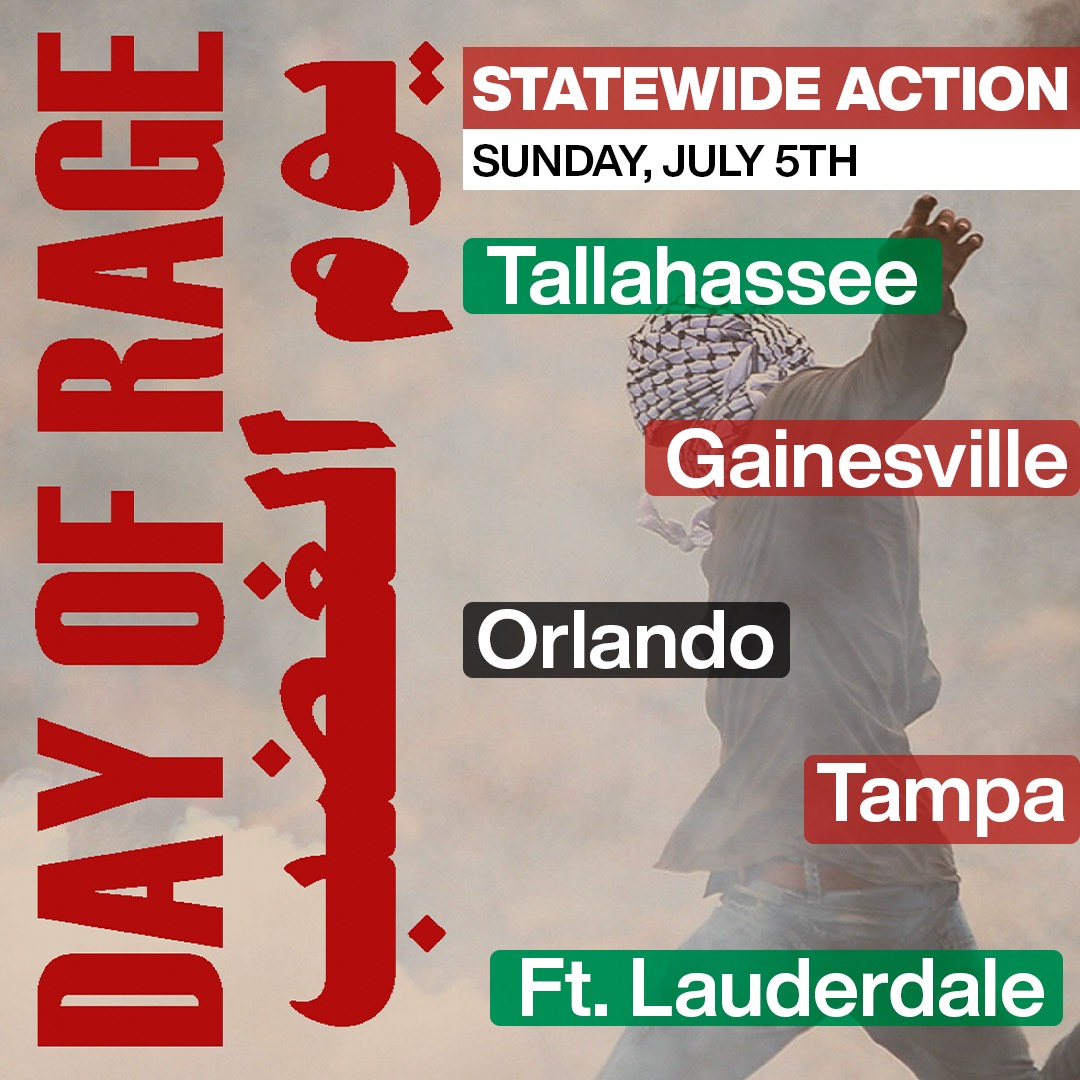 This Sunday, July 5, 2020, six major cities in Florida will be mobilizing direct action by activating a statewide “Day of Rage”. The main objectives of these rallies will be to oppose the annexation of Palestinian territory, protest the Deadly Exchange program and, ultimately, stand against the genocide of the Palestinian people. The six cities participating in this demonstration are Gainesville, Tallahassee, Orlando, Tampa, Ft. Lauderdale and Miami. Alongside Palestinian liberation, this “Day of Rage” will give a platform to other international struggles and further augment the Black Lives Matter campaign.

This Palestinian struggle is intertwined in the battle against police brutality and militarism in the U.S. The regimes of Donald Trump and Benjamin Netanyahu intersect through the Deadly Exchange program. Police, ICE, border patrol and FBI from the U.S. converge with soldiers, police and border patrol from Israel to share “worst practices” that promote and extend discriminatory and repressive policing in both countries. These practices include racial profiling, massive spying and surveillance, deportation, detention and attacks on human rights defenders (deadlyexchange.org).

Francis Boyle, a professor of international law, argued in 2013 that: “For over the past six and one-half decades, the Israeli government and its predecessors in law – the Zionist agencies, forces, and terrorist gangs – have ruthlessly implemented a systematic and comprehensive military, political, religious, economic, and cultural campaign with the intent to destroy in substantial part the national, ethnical, racial, and different religious group constituting the Palestinian people.”

Starting in 1948 with the ongoing Nakba, also known as the Palestinian Exodus, Palestinians have been exiled from their homes and murdered at the hands of Zionists who are sustained by aid from the U.S. The annexation of the West Bank and extensive parts of Jordan leaves Palestinians to survive on 10% of the land whilst under Israeli military occupation and extends Israel’s illegal occupation to full control of 90% of the land. The meager region left to Palestinians will be divided by Israeli only roads, checkpoints and walls. This is the most aggressive land grab since the Naksa of 1967.

Israel is the largest cumulative recipient of U.S. aid since World War II. Most of this compensation is in the form of military assistance, although Israel has also received significant economic assistance. The U.S. actively finances the genocide of the Palestinian people and Israel actively supports the barbarity of policing in the U.S.

The people are grappling for liberation and realizing their chains are linked. Palestinians have exhibited solidarity with liberation efforts in the U.S. and this “Day of Rage” will display unification with their emancipation. As Maya Angelou said, “The truth is, no one of us can be free until everybody is free.” 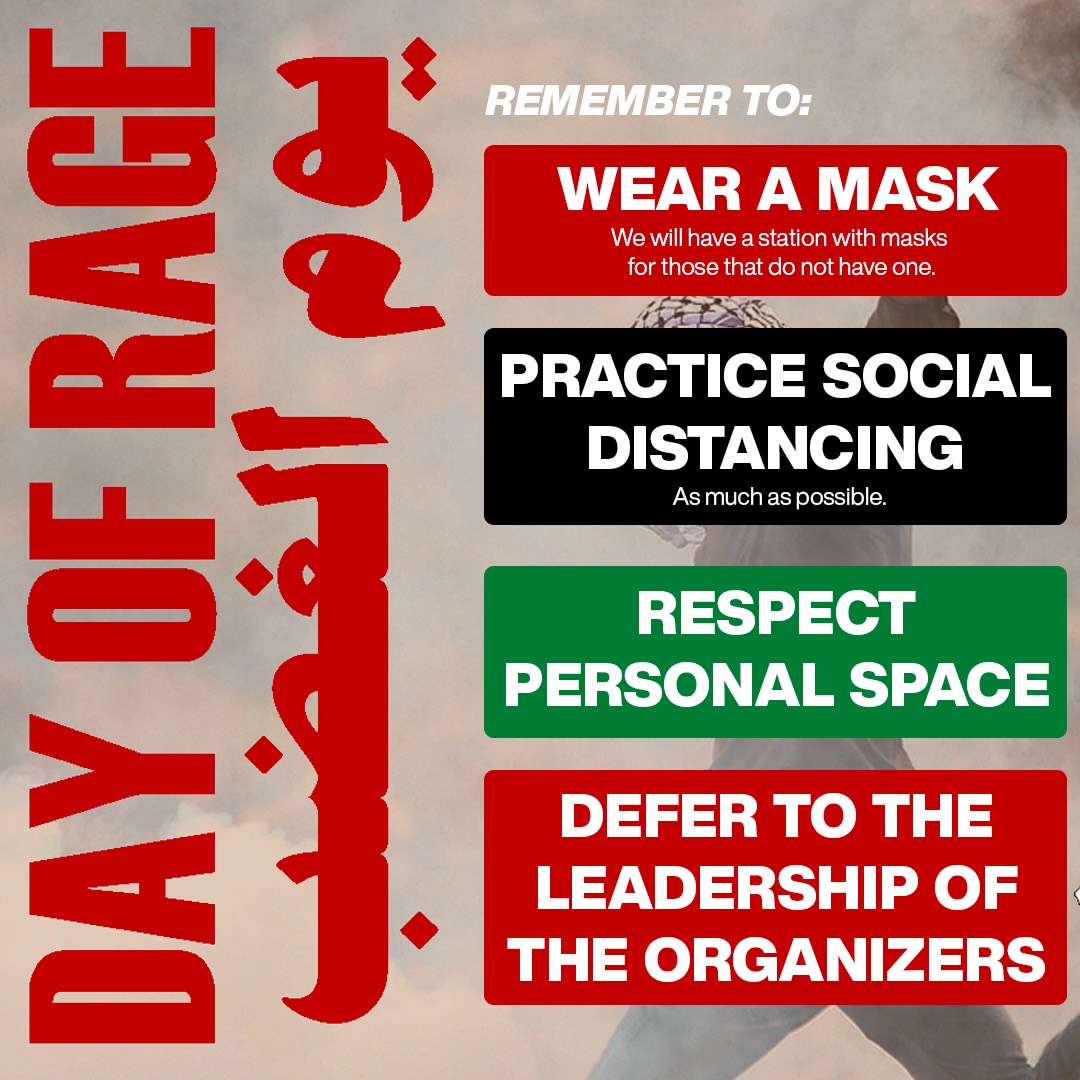 We are looking forward to making noise with you all tomorrow evening in Gainesville and across Florida. We know that some of us cannot take to the streets, but you can still join us in protest by making 3 phone calls. Call any office of our 2 Senators and then call your District Representative.

Check these photos to find what to say and phone numbers. 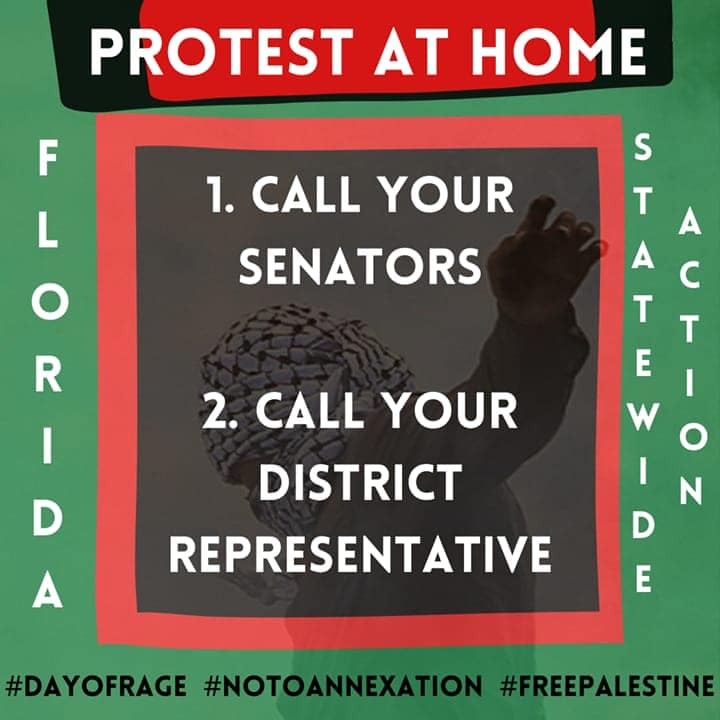 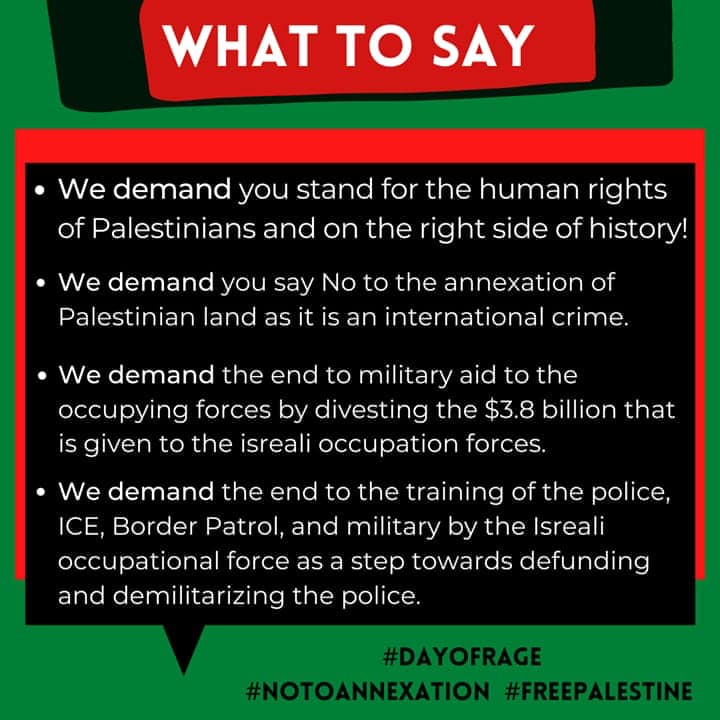 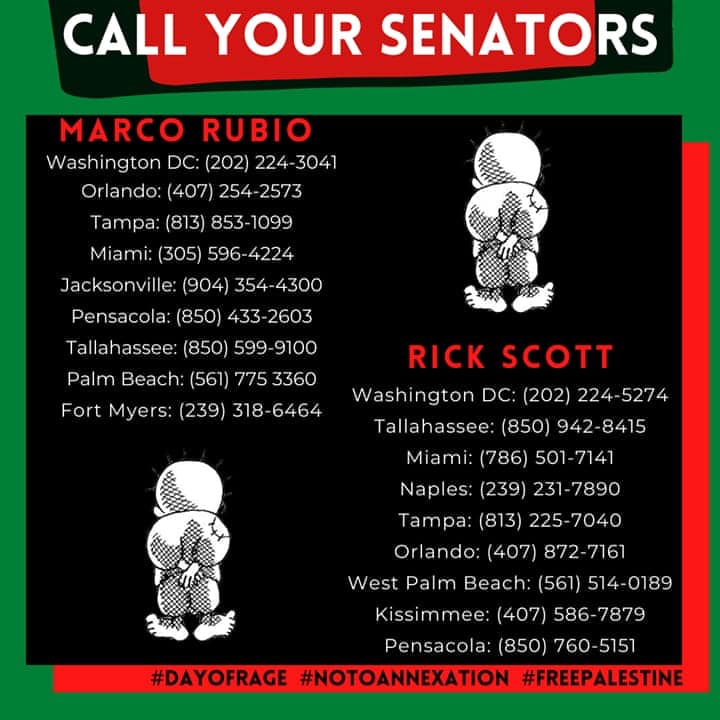 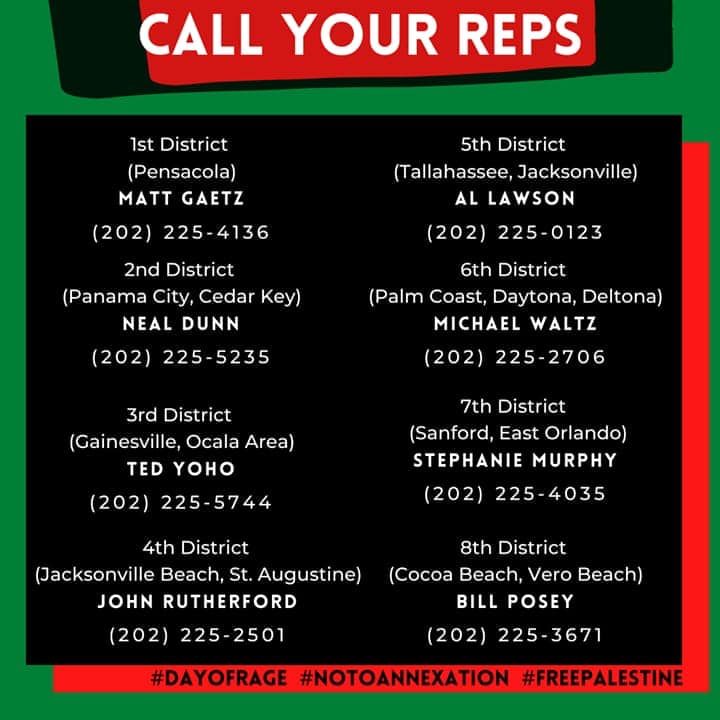 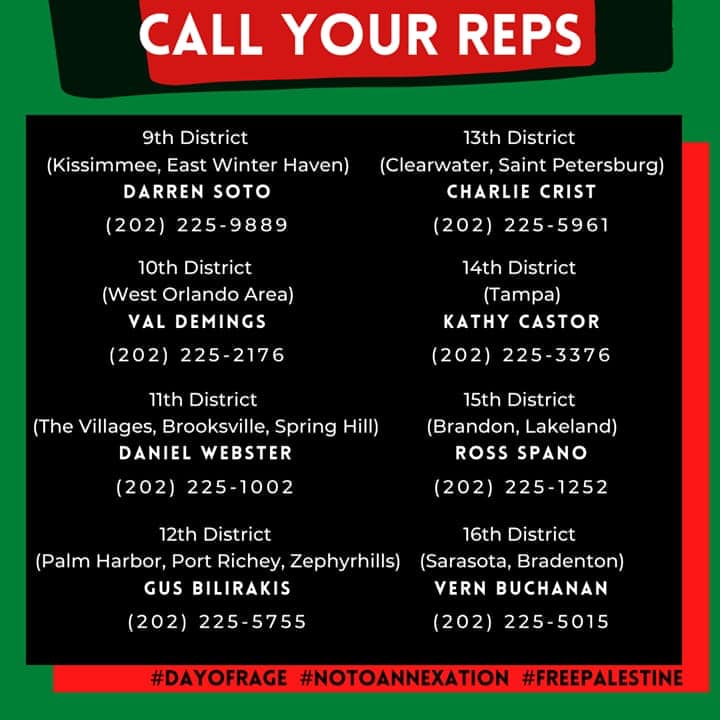 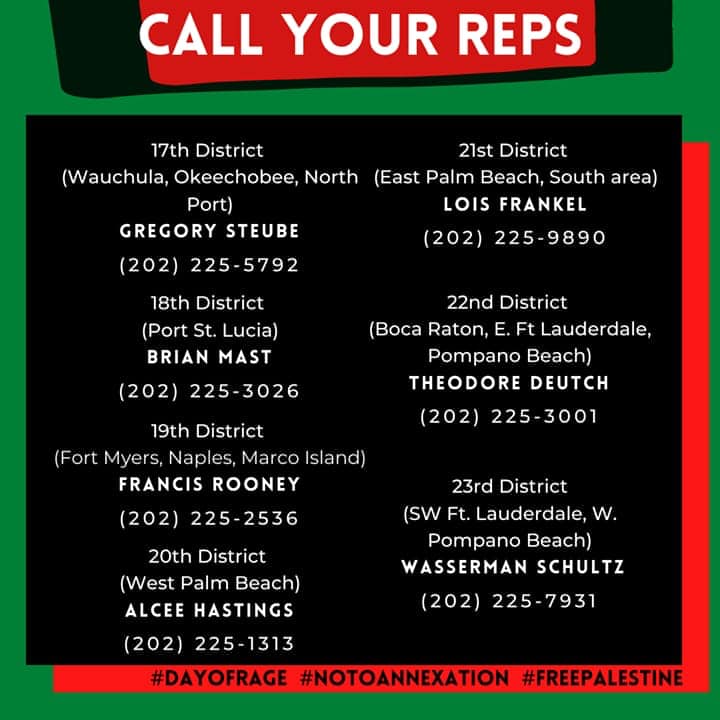 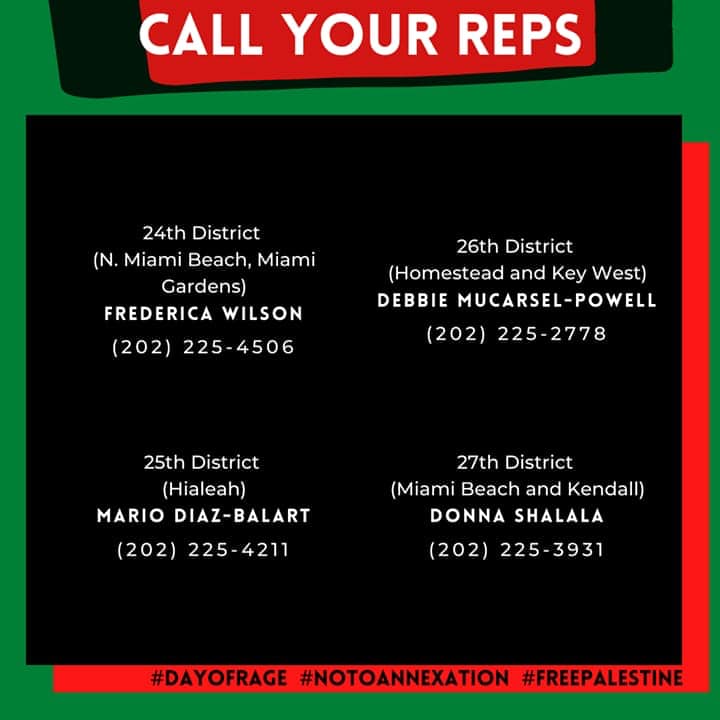 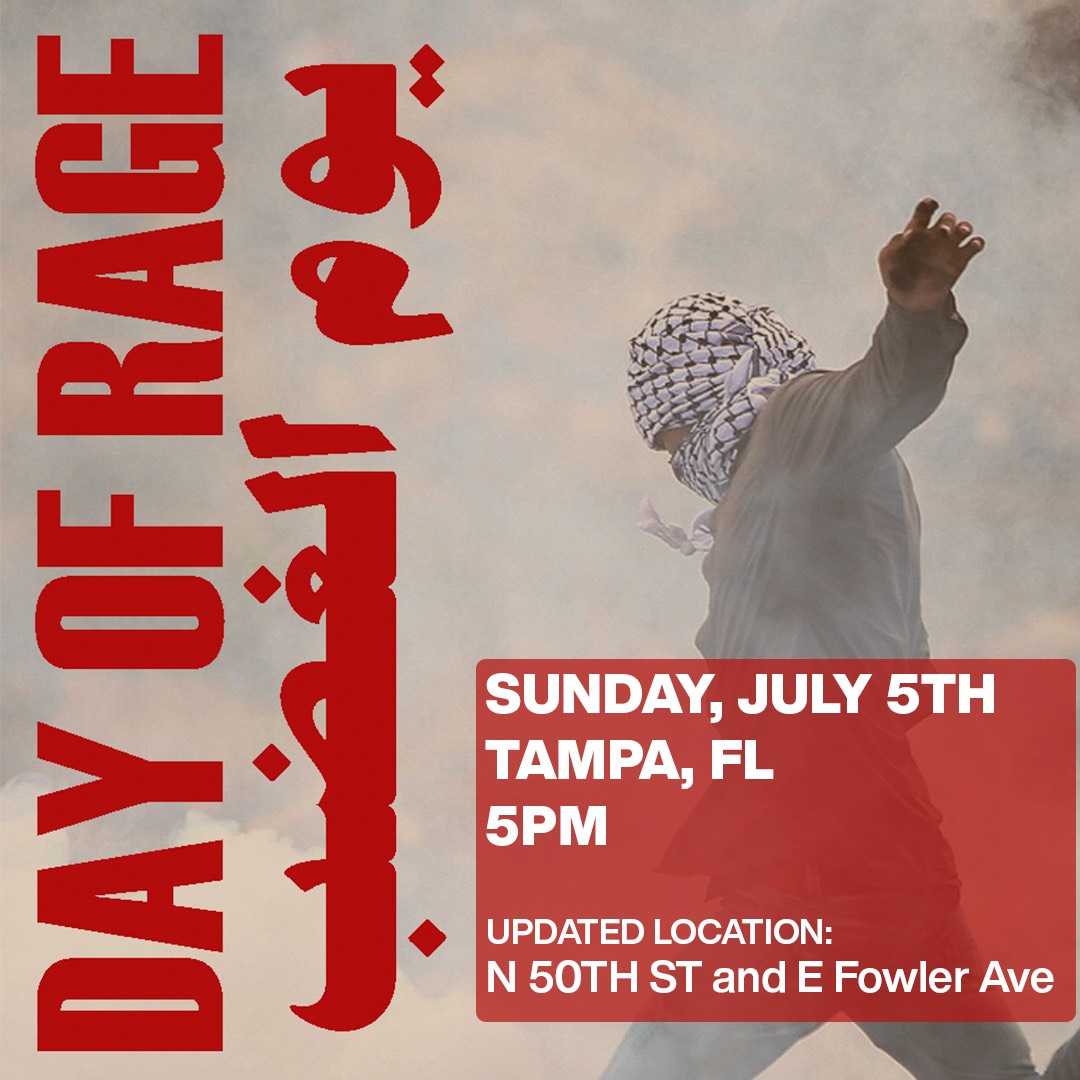 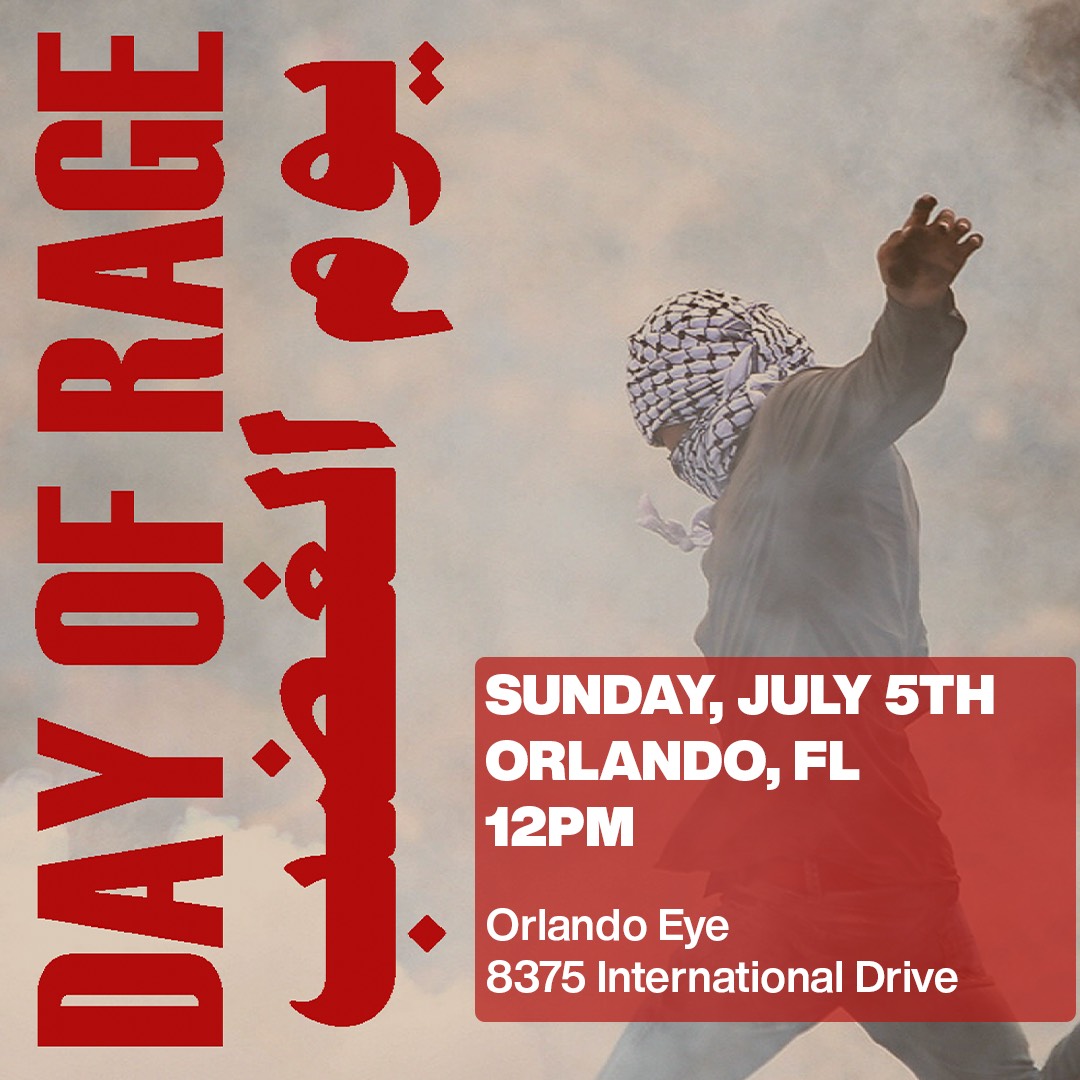 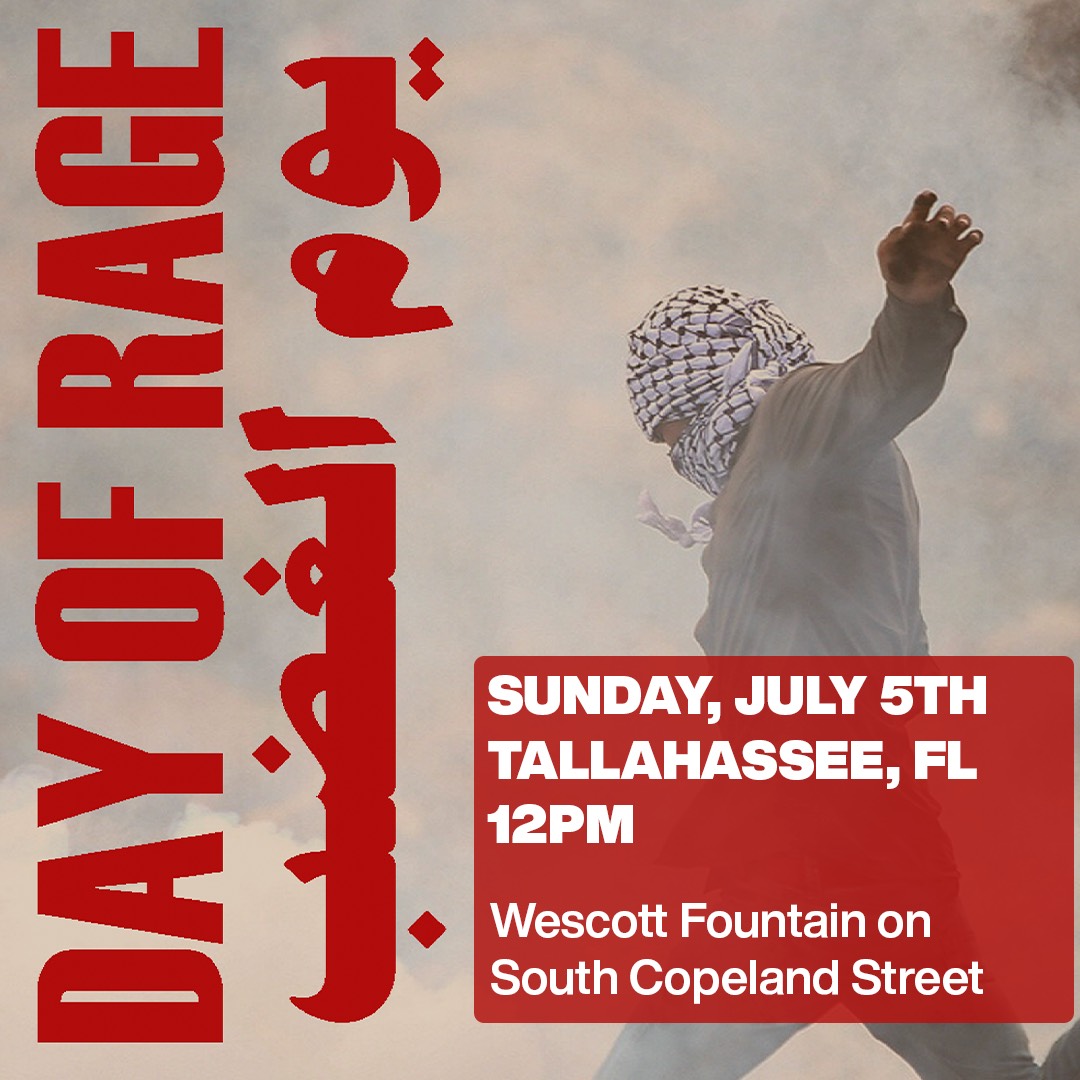 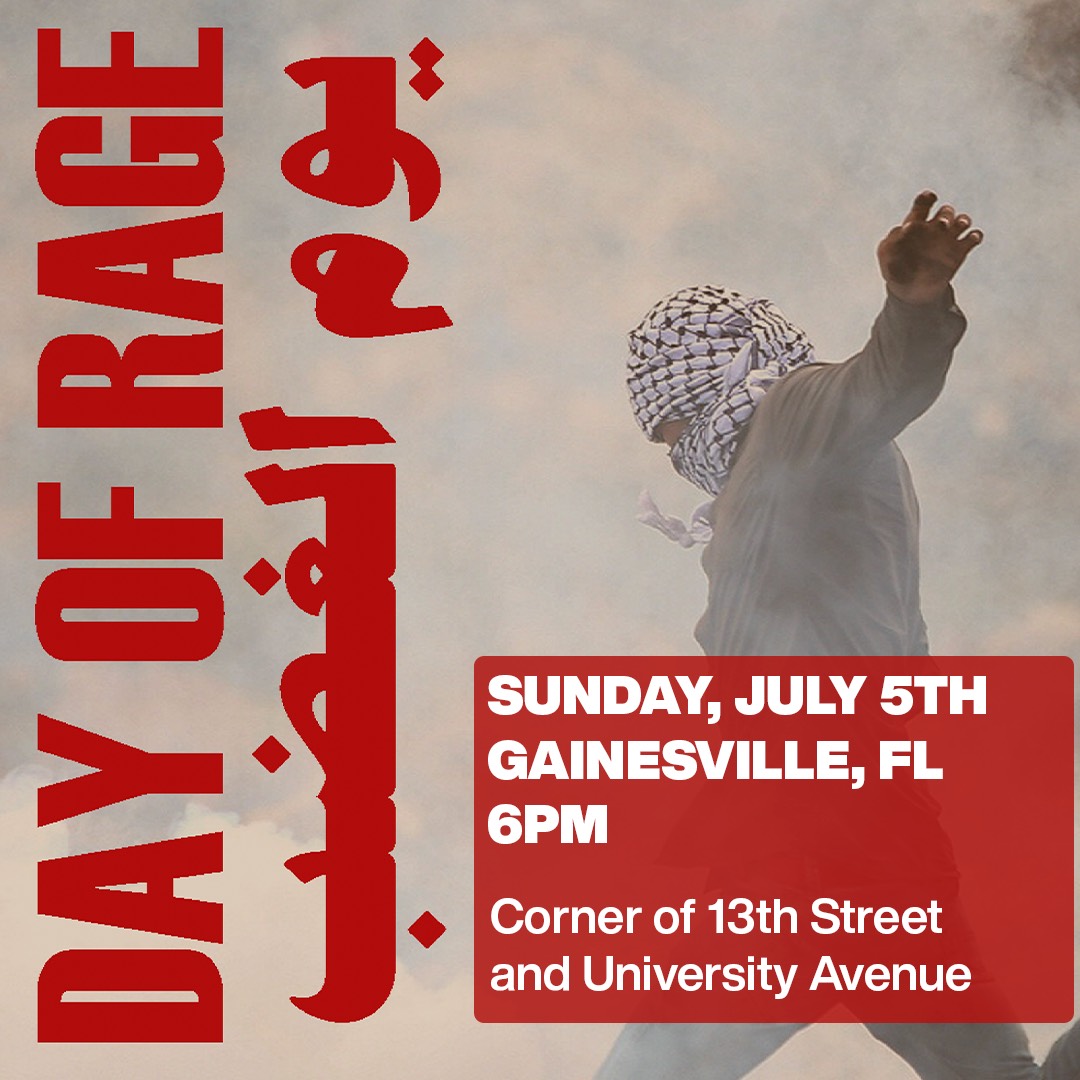 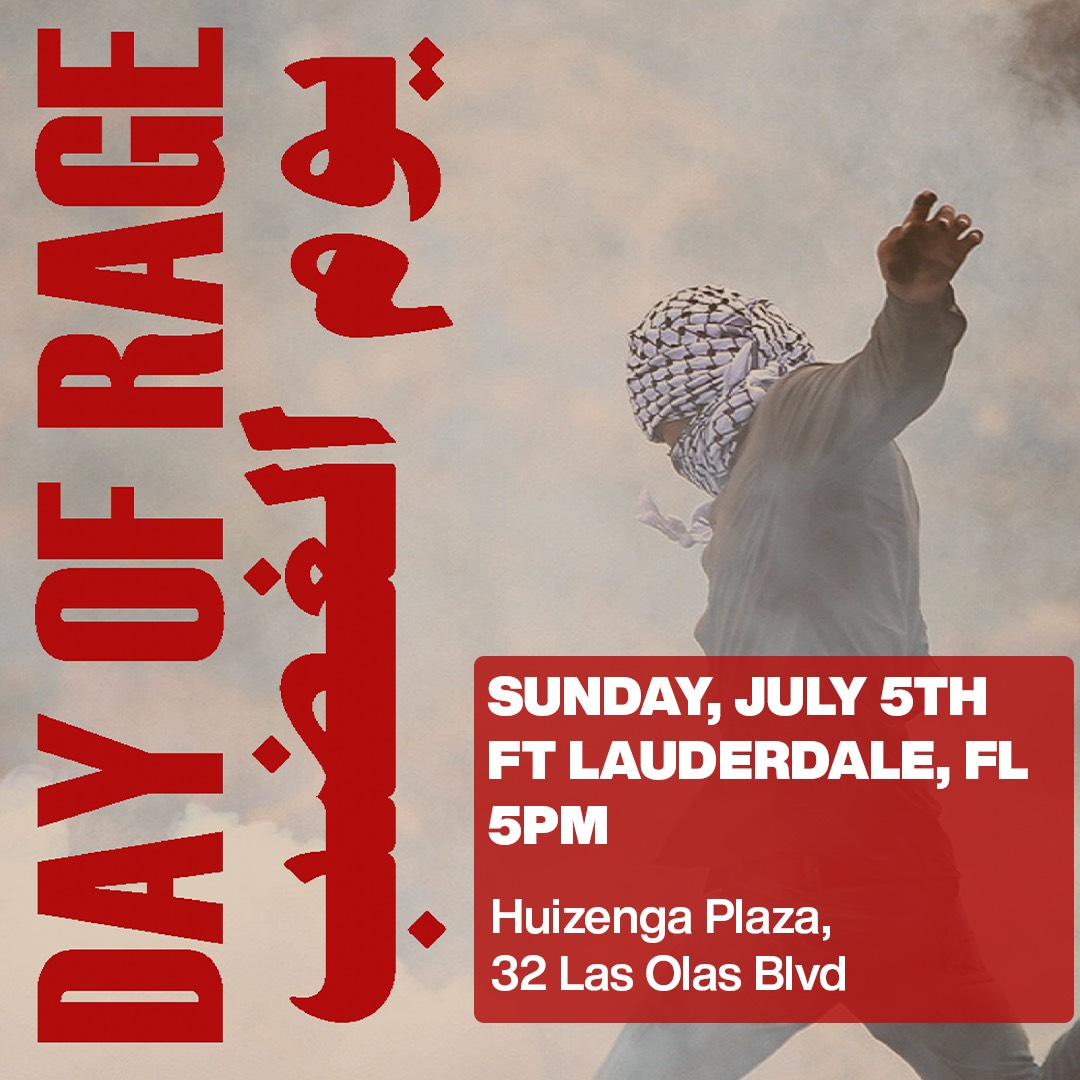