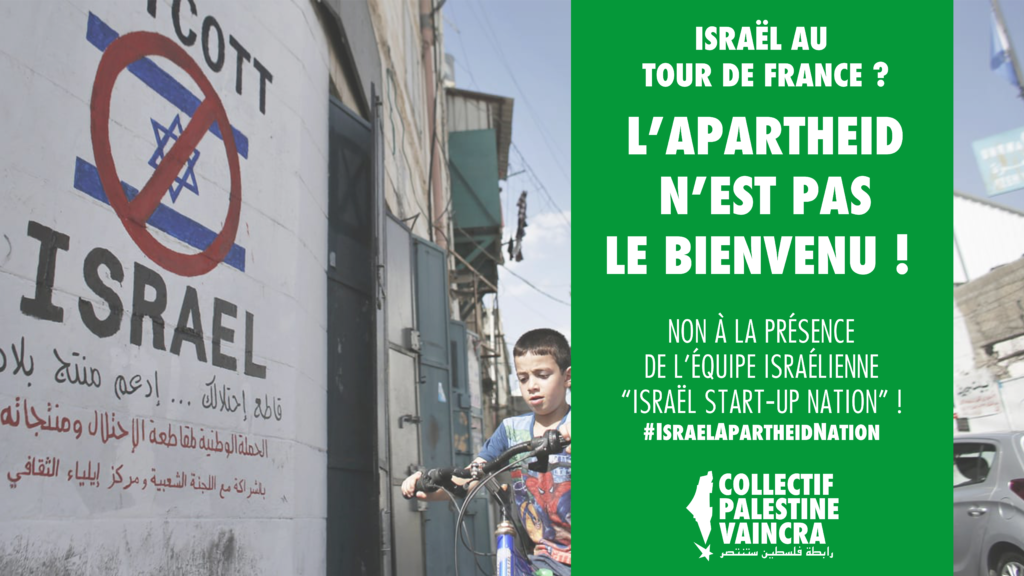 The following content was mainly translated from the French at Collectif Palestine Vaincra:

The Tour de France is a major international athletic competition that draws millions of spectators to watch the cyclists along the roads of France. Following the COVID-19 pandemic, the Tour de France was rescheduled for 2020 between 29 August and 20 September 2020.

This year, a “Brand Israel” team designed specifically to promote the apartheid state in occupied Palestine has joined the Tour. Named “Israel Start-Up Nation,” the team is funded by Canadian billionaire Sylvan Adams, and it has an overtly political agenda to put a sporting cover on the face of colonialism, racism and occupation. Join us to take action and confront #IsraelApartheidNation!

Adams said in the French newspaper Le Monde, “The members of the team are ambassadors of the country of Israel, which is the basis for the team. Sport is used to create links and promote the image of the country.” Indeed, Israeli prime minister – and notorious war criminal – Benjamin Netanyahu has actively participated in promoting the team, clasping hands with Adams at a promotional event.

By welcoming this team to participate in the Tour de France, the tour’s organizers are complicit in a marketing campaign to promote an apartheid state. As the Campaign BDS France noted in its statement, “The Israeli state views this as a new opportunity to divert attention from its criminal policies, especially in the context of growing protests after the announcements of its annexation plan..”

Samidoun Palestinian Prisoner Solidarity Network joins with our member organization in Toulouse, France, the Collectif Palestine Vaincra, and many other organizations in France, including the Campaign BDS France, Union Juive Française pour la Paix (UJFP) and the Parti des Indigènes de la République (PIR), to call for action to challenge this apartheid-promoting team in the Tour de France!

As an increasing number of organizations have taken a stand against the apartheid-promoting Tour team, the extreme right and the Zionist movement in France have attempted to silence criticism and boost the team. The notoriously racist Jewish Defense League framed opposition to the team as “hate,” while member of parliament Meyer Habib, known for his support of the Israeli right wing and his anti-Palestinian rhetoric, has also attempted to frame this marketing campaign for colonialism as a victim of online challenges.

Take a stand against the normalization and marketing of racism and colonialism and the promotion of a racist state that has been built on ethnic cleansing and apartheid since its creation in 1948 in occupied Palestine. Confront the presence of these self-proclaimed “ambassadors” of apartheid throughout the Tour de France route!

1. Join the Twitterstorm on Friday, 28 August at 9 am Pacific/12 pm Eastern/6 pm central Europe or central Africa/7 pm Palestine time. Use the hashtags #IsraelApartheidNation and #TDF2020. Click here for an automatic tweet to join the storm!

2. Go to the route of the Tour and protest along the route to stand up for Palestine and against #IsraelApartheidNation. Use the posters below. Join the Facebook event to show support for Palestine at the Tour de France. The Tour schedule is:

3. Join the social media campaign against #IsraelApartheidNation. Use the visuals below on Twitter, Instagram and Facebook, or add the Facebook profile frame. On Twitter, tag the French cyclists who are cycling for the apartheid team and call on them to pull out: Alexis Renard (@alexisrenard_), Hugo Hofstetter (@hugohofstetter), and Rudy Barbier (@rudybarbier75). 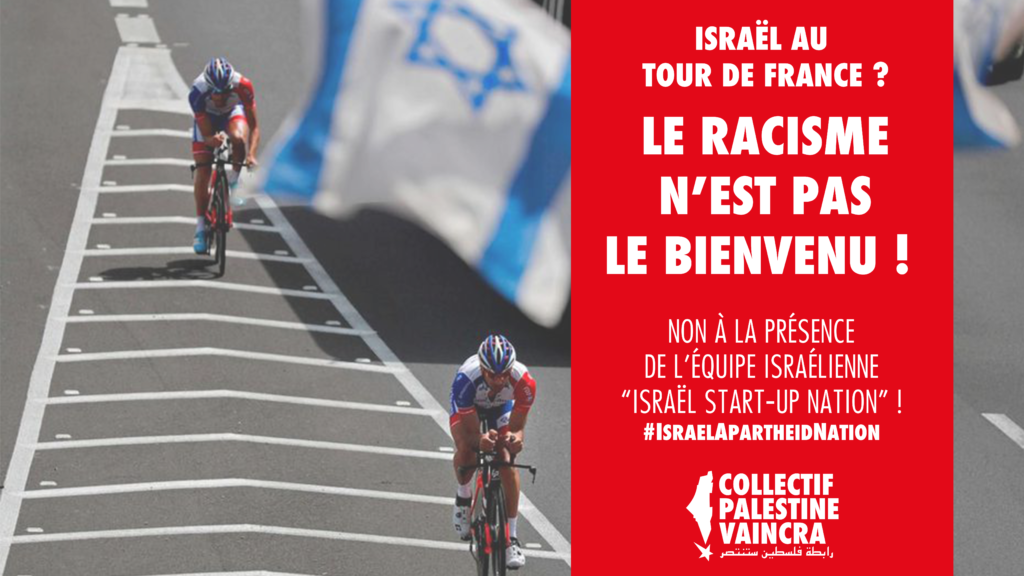 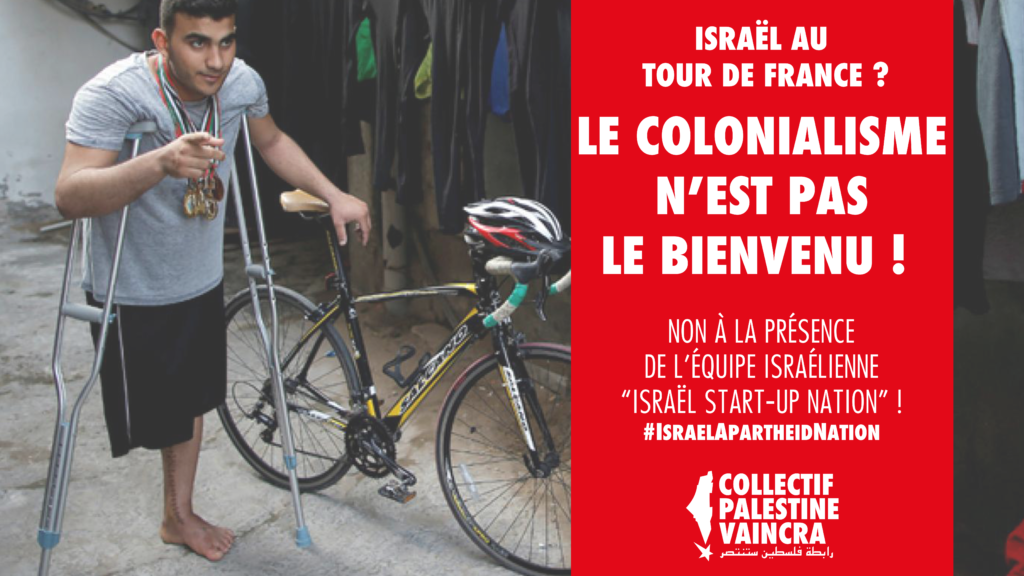 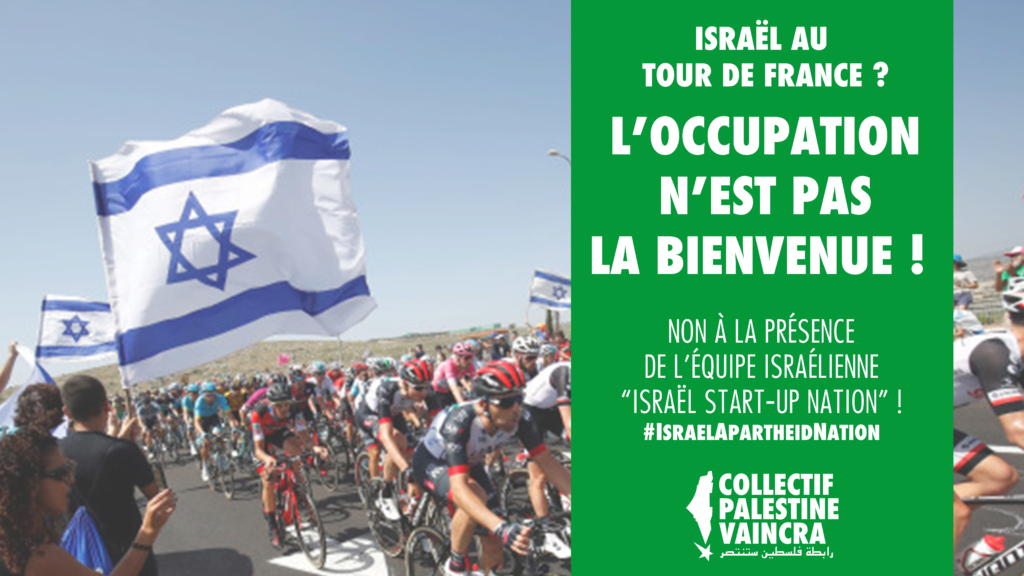 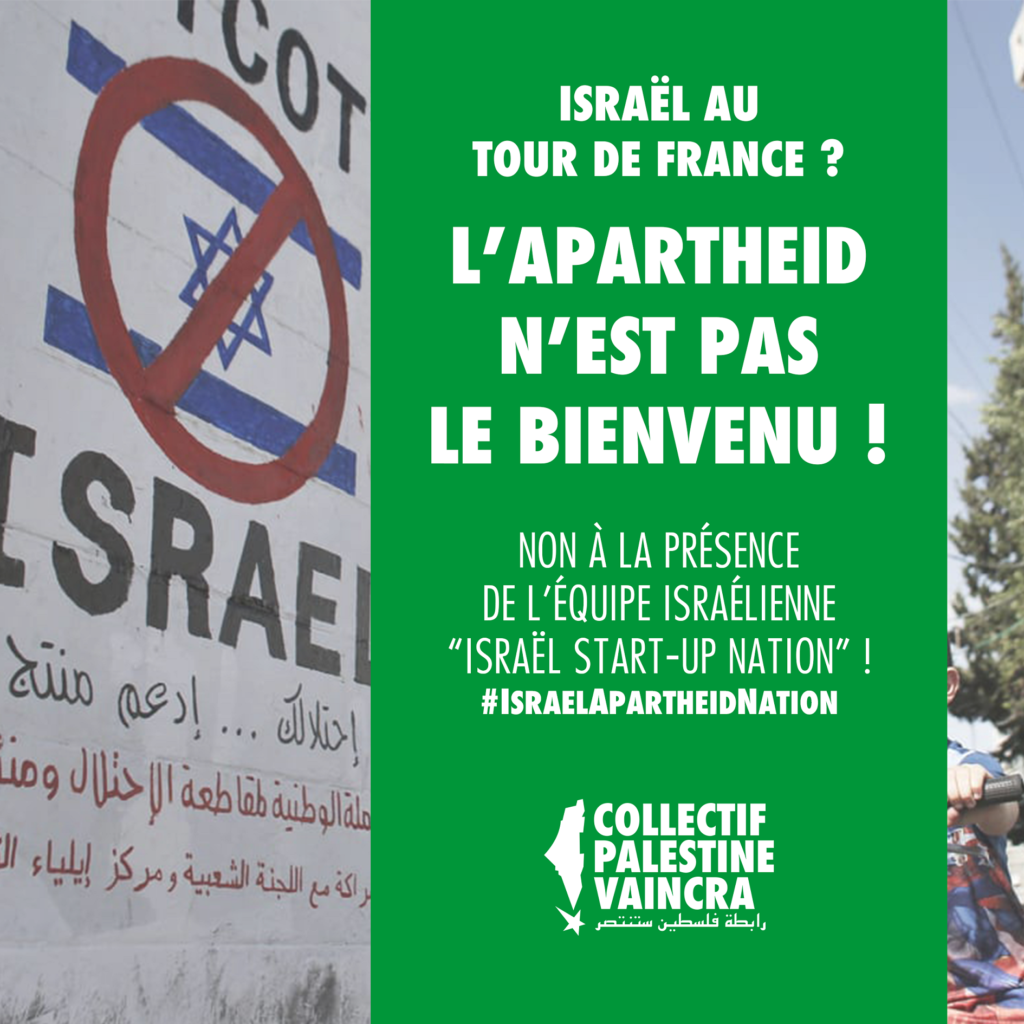 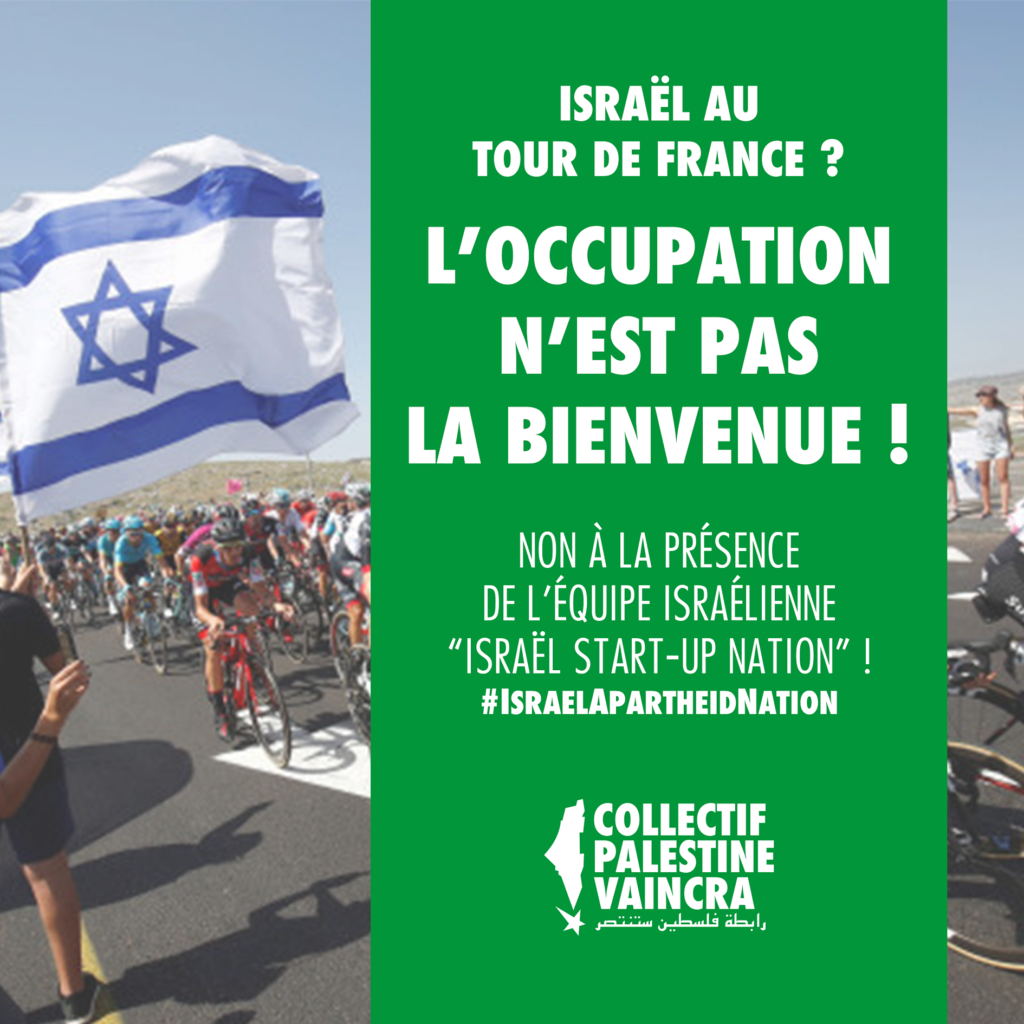 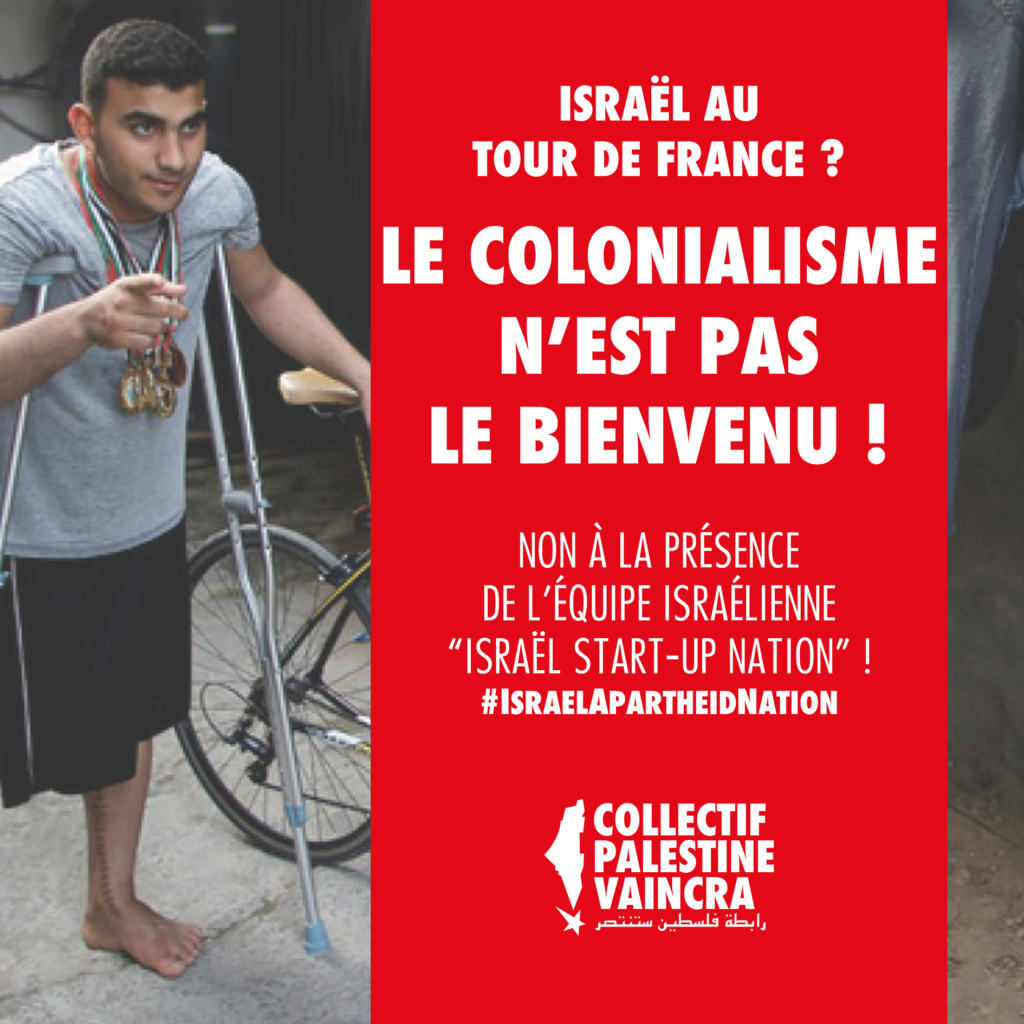 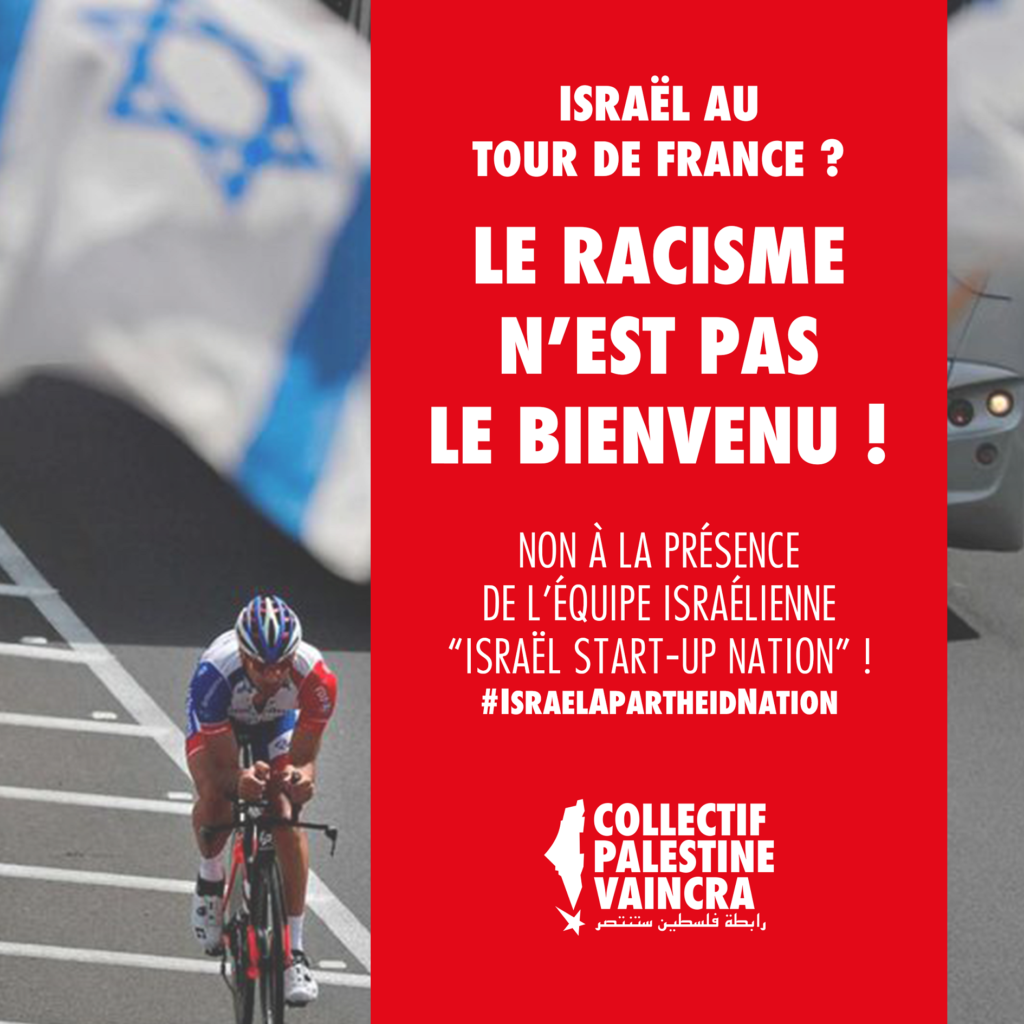