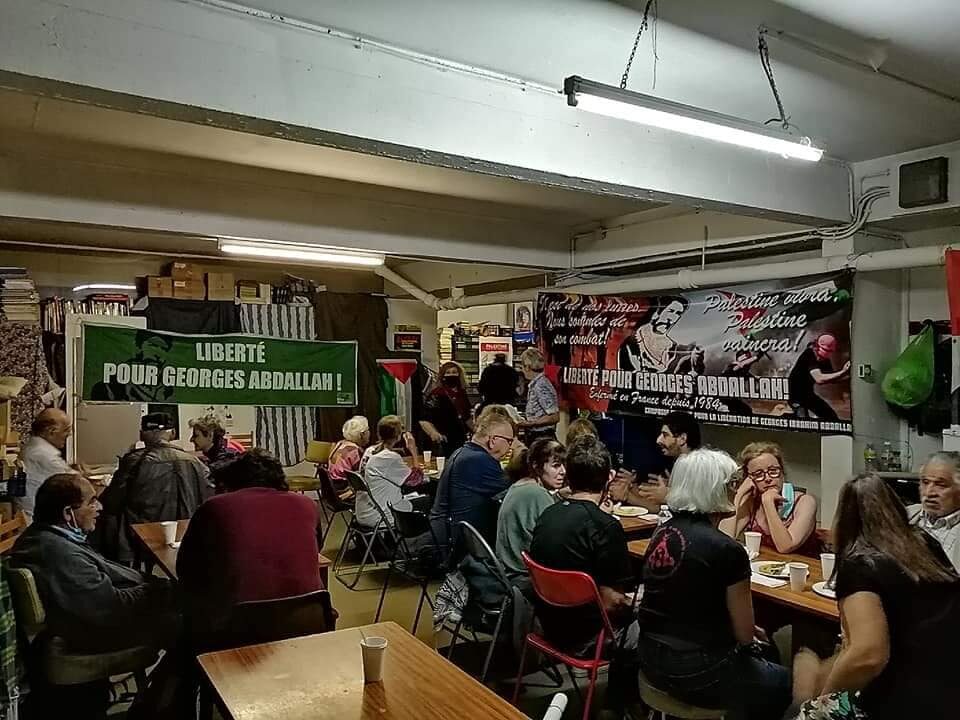 The Unitary Campaign for the Liberation of Georges Abdallah brought together over 70 people in Paris on Saturday, 12 September for a solidarity meal and evening gathering to support Georges Ibrahim Abdallah. The Lebanese Arab Communist struggler for Palestine has been jailed in France for over 35 years, despite being eligible for release since 1999, and the movement for his release has been growing in both France and Lebanon. On both of his recent visits to Beirut, French president Emmanuel Macron has been greeted with demands for Abdallah’s release and return to Lebanon. 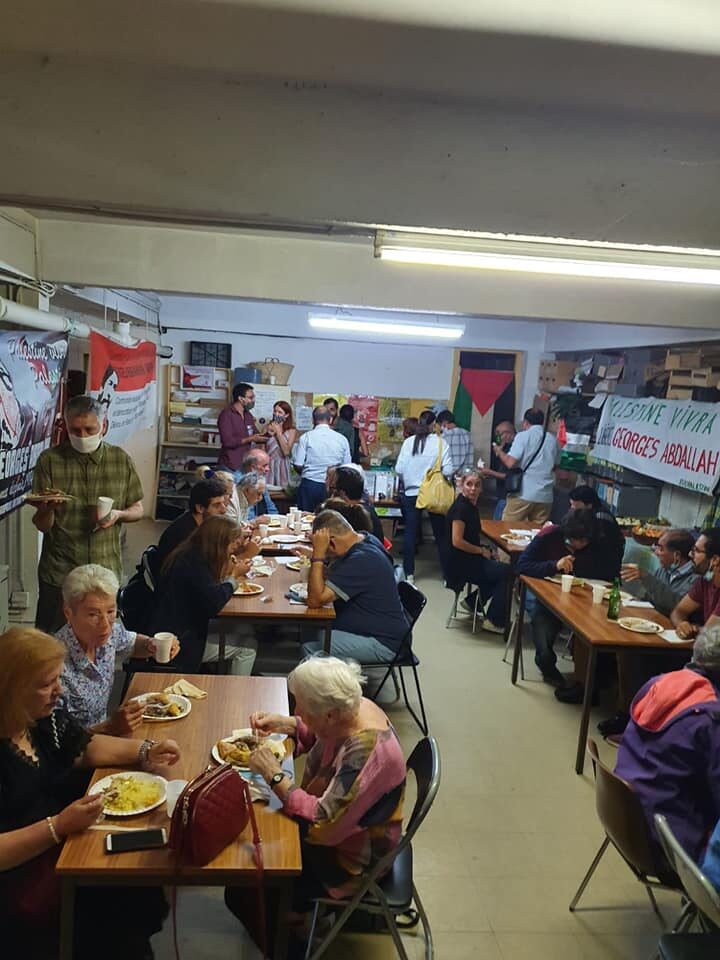 The event began with the reading of a new statement by Georges Abdallah, written for the occasion, followed by a statement of the Unitary Campaign, announcing an upcoming international month of actions to free Georges Abdallah between 22 September and 24 October. These actions aim to escalate the pressure and mobilize for the national demonstration on 24 October 2020 in Lannemezan, marching to the gates of Lannemezan prison, where Georges Abdallah is confined. Hundreds of people join this annual march to mark the anniversary of his arrest in 1984. 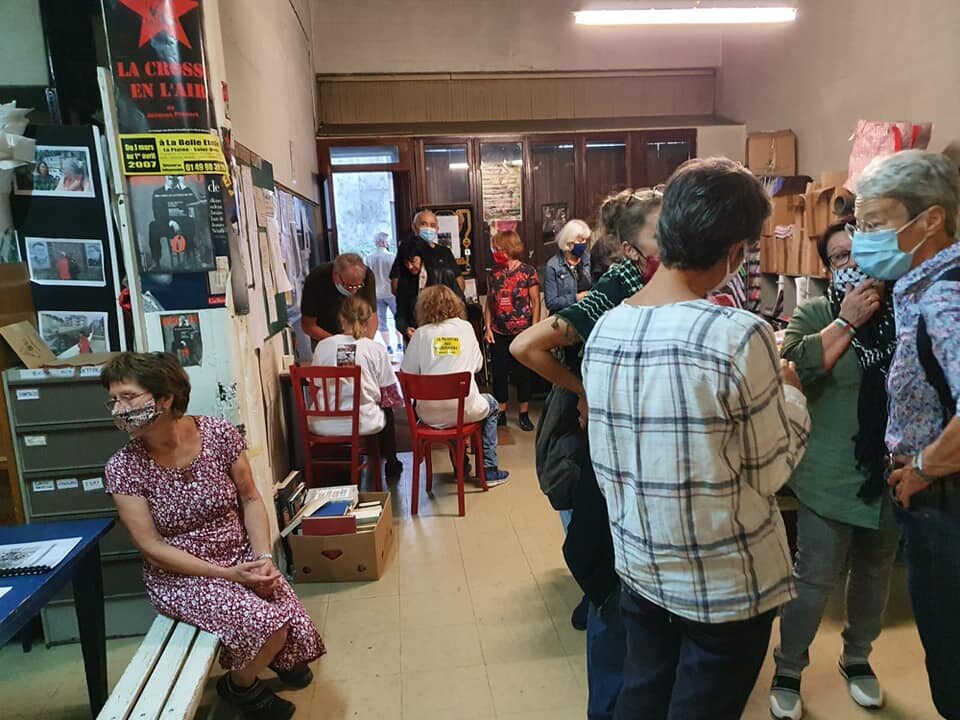 The discussion was followed by a collective meal including Lebanese, Moroccan, Turkish and Kurdish specialties, as organizers and participants planned for the next actions in struggle to continue the campaign to free Georges Abdallah. 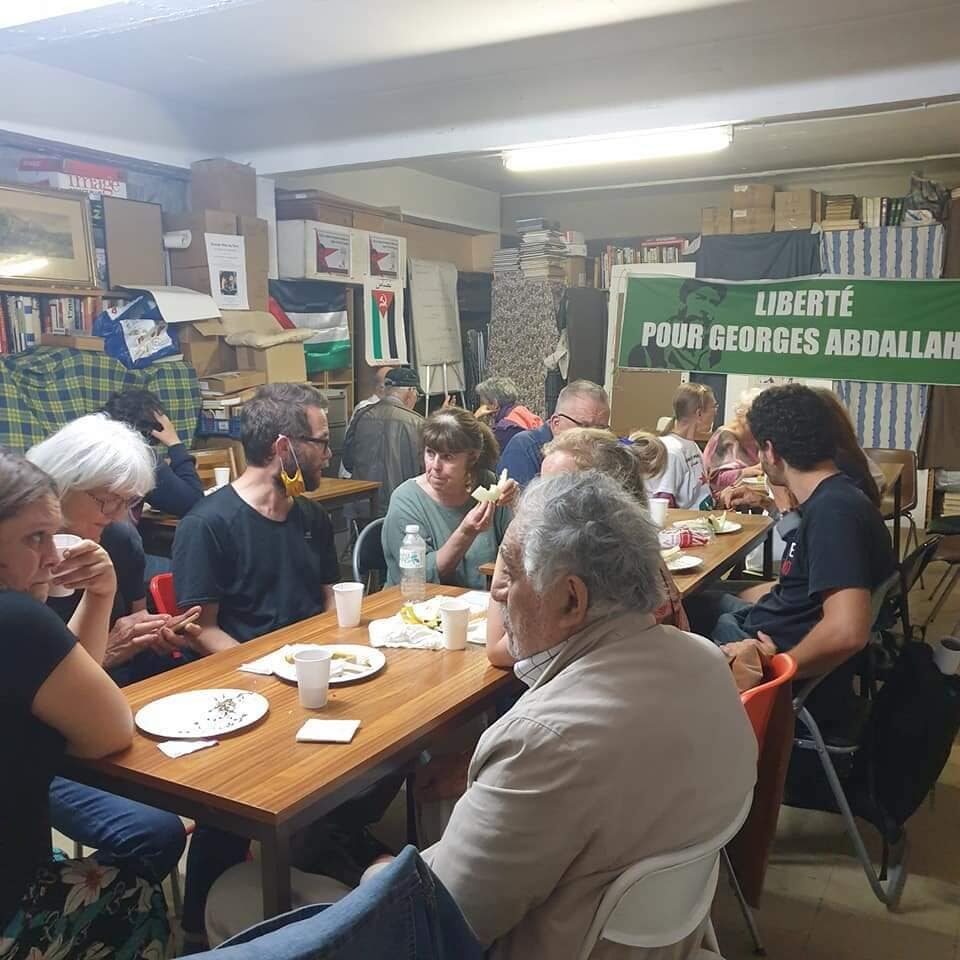 Georges Abdallah regularly participates, from French prisons, in the struggles and collective hunger strikes of the Palestinian prisoners; he joined in the strikes of 2014, 2017 and 2019 from Lannemezan prison. He also refused meals for three days in 2016 in solidarity with the hunger strike of Palestinian prisoner Bilal Kayed, fighting against his imprisonment without charge or trial under administrative detention. 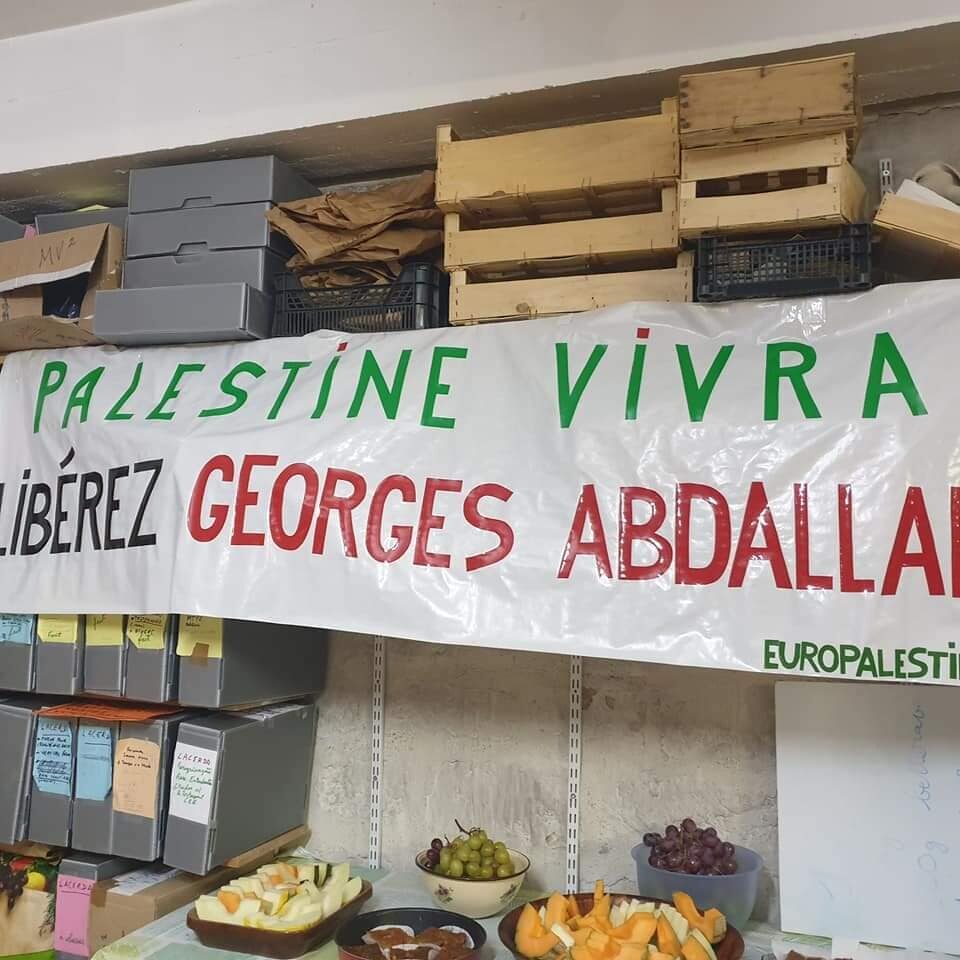 In a letter from Israeli prison in 2018, imprisoned Popular Front for the Liberation of Palestine General Secretary Ahmad Sa’adat said: “For us, inside Israeli prisons, Georges Abdallah is a fellow struggler and a fellow Palestinian prisoner. We call him ‘the General of the prisoners of the PFLP.’ He is part of us – one with us in unity and common struggle. We feel his support and participation in our struggle across seas and through iron bars and prison walls. He returns meals with our hunger strikes, his heart beats for Palestine just as his politics centers its liberation, and he has spent decades imprisoned because of his commitment to the liberation of the Palestinian and Arab people.

Indeed, Georges Abdallah is an icon of resistance. With his clear analysis and involvement in all struggles for justice inside France and around the world, he refuses all attempts to isolate and silence him. His case also shows quite clearly just how strongly U.S. and French imperialism are tied to Zionism and the colonization of Palestine.” 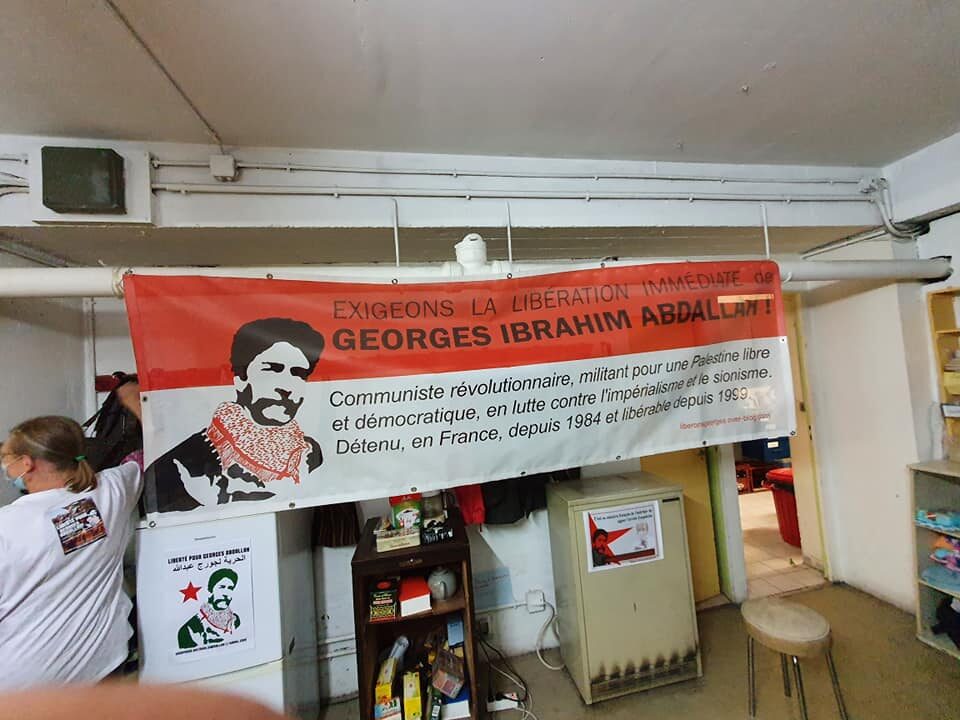 Buses are being organized from many places in France to attend the 24 October rally at Lannemezan prison, including Toulouse, Paris, Marseille and elsewhere. 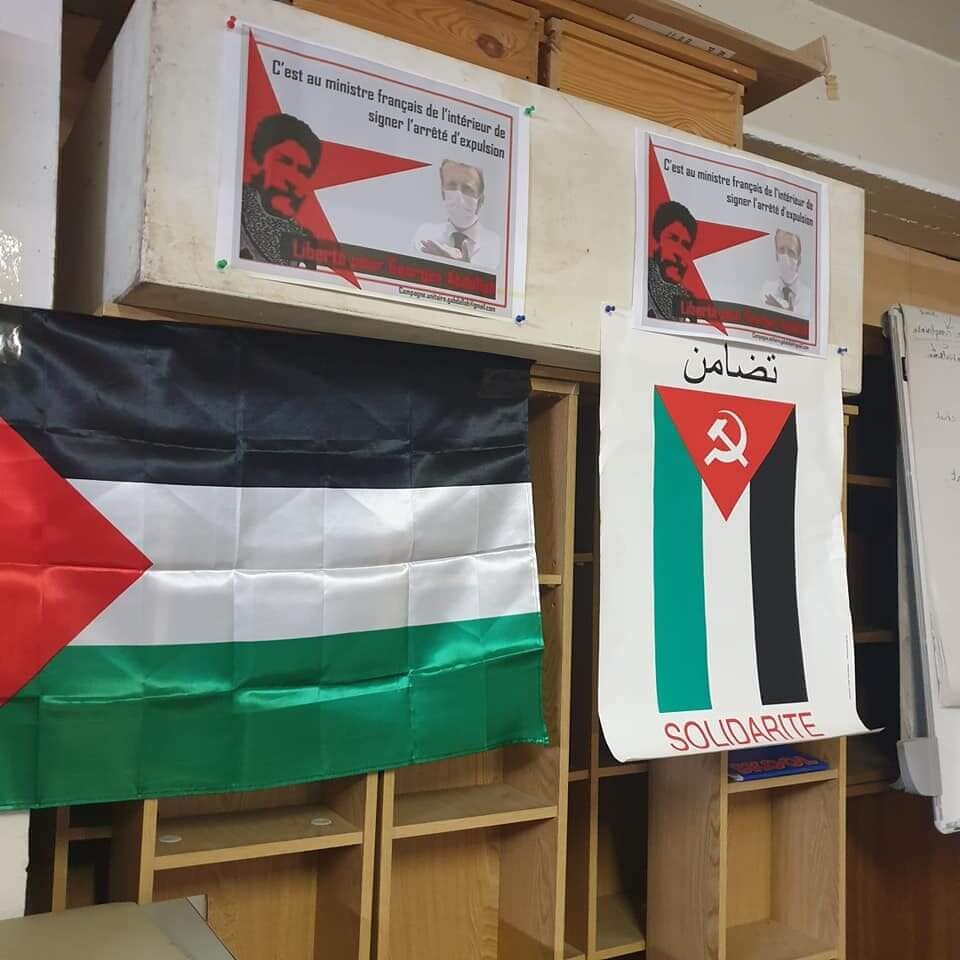