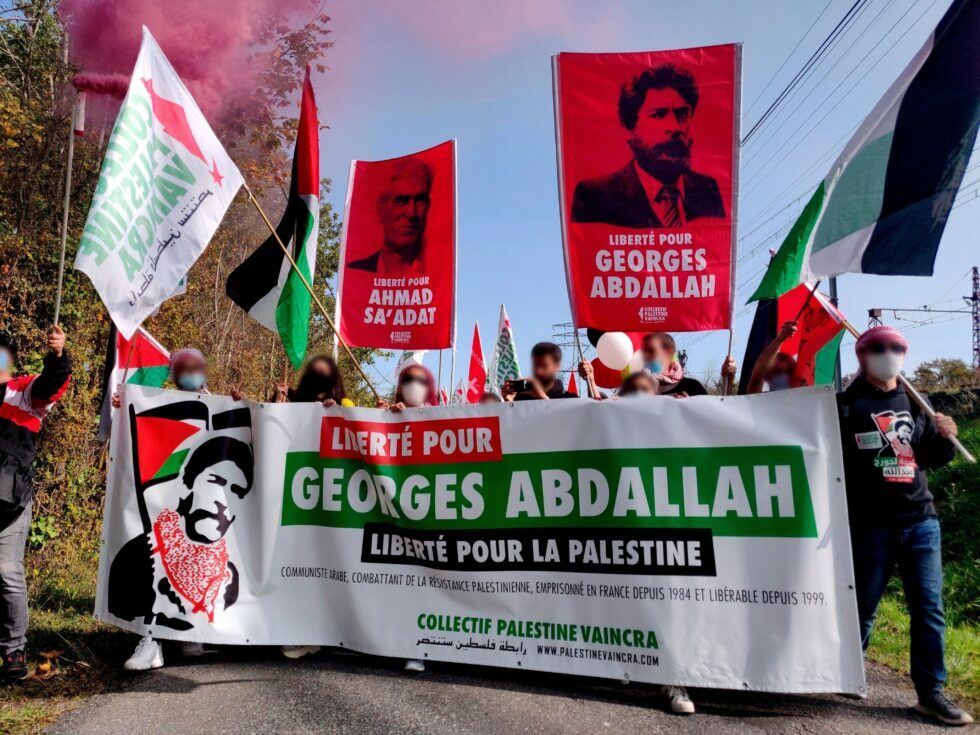 Much of the following report is a translation from the French at Collectif Palestine Vaincra: 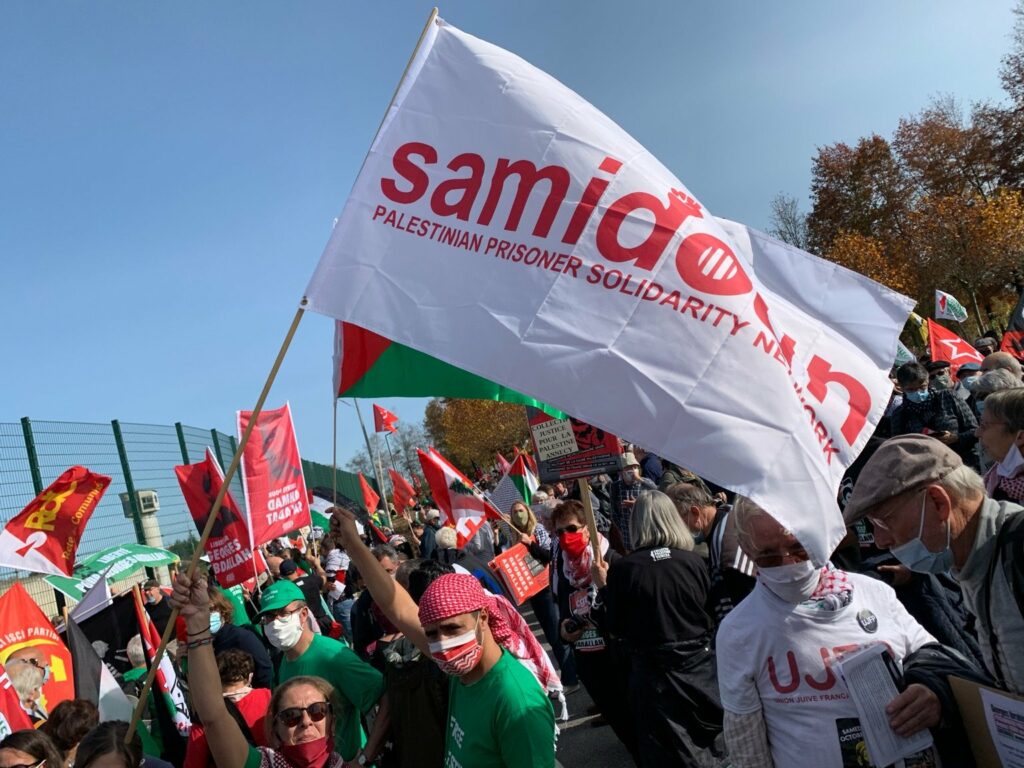 On Saturday, 24 October, over 600 people marched to the gates of Lannemezan prison to demand the immediate release of Georges Ibrahim Abdallah, Lebanese Arab Communist and struggler for Palestine who has been imprisoned in France since 1984. For the 10th consecutive year, the demonstration brought the largest ever number of participants, despite the pandemic and the curfew limiting movement. 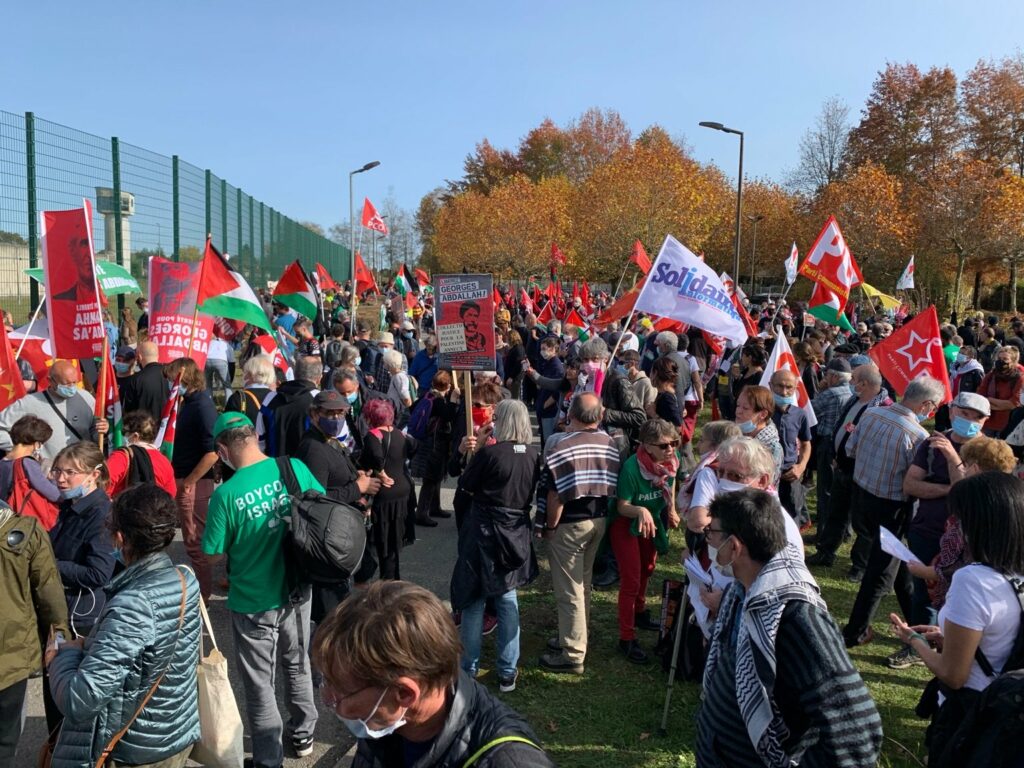 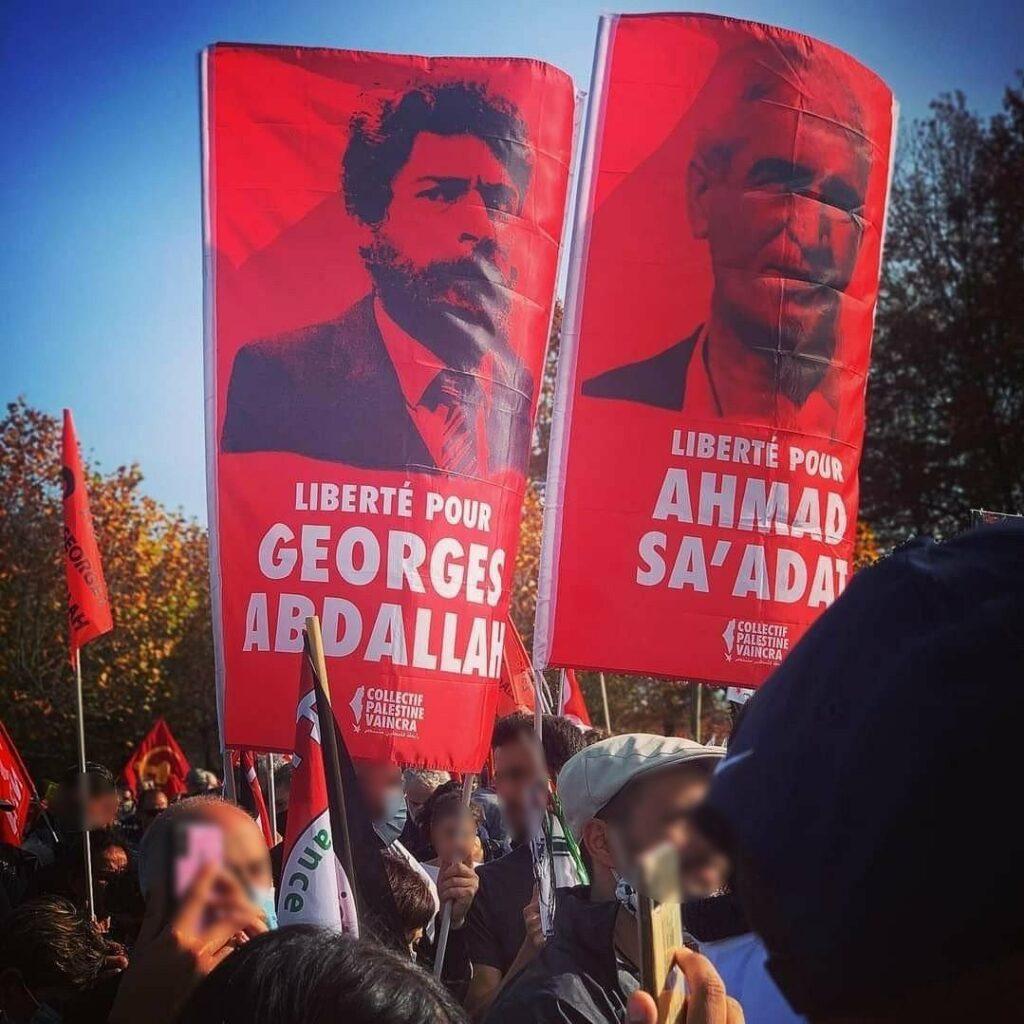 The immense political and organizational diversity of the participants at the demonstration makes clear that the struggle for the liberation of Georges Abdallah unites all who love justice. The march was led by a united banner of the various committees calling for the release of Georges Abdallah. 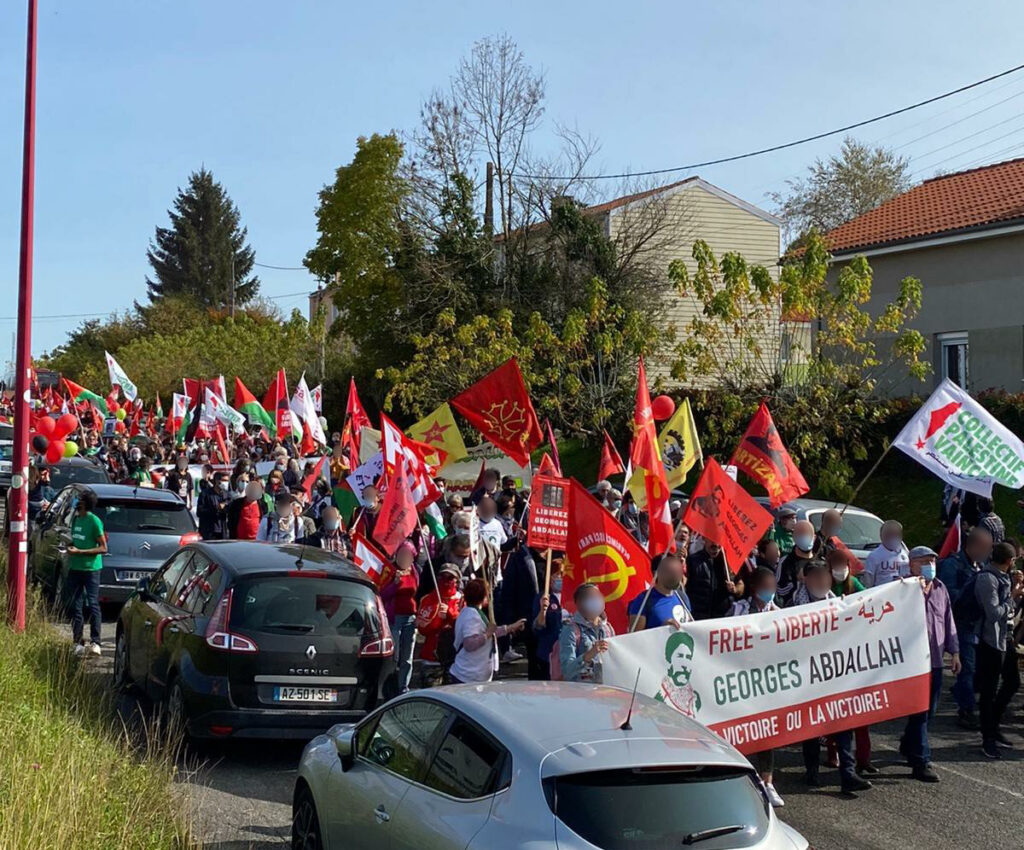 Collectif Palestine Vaincra, a member organization of the Samidoun Network, organized a contingent around the slogan, “Free Georges Abdallah! Free Palestine!” which included dozens of demonstrations. Many Palestinian flags, banners of the Collectif and Samidoun banners were waved along with two large banners calling for freedom for Georges Abdallah and for Ahmad Sa’adat, the imprisoned General Secretary of the Popular Front for the Liberation of Palestine held in Israeli jails. 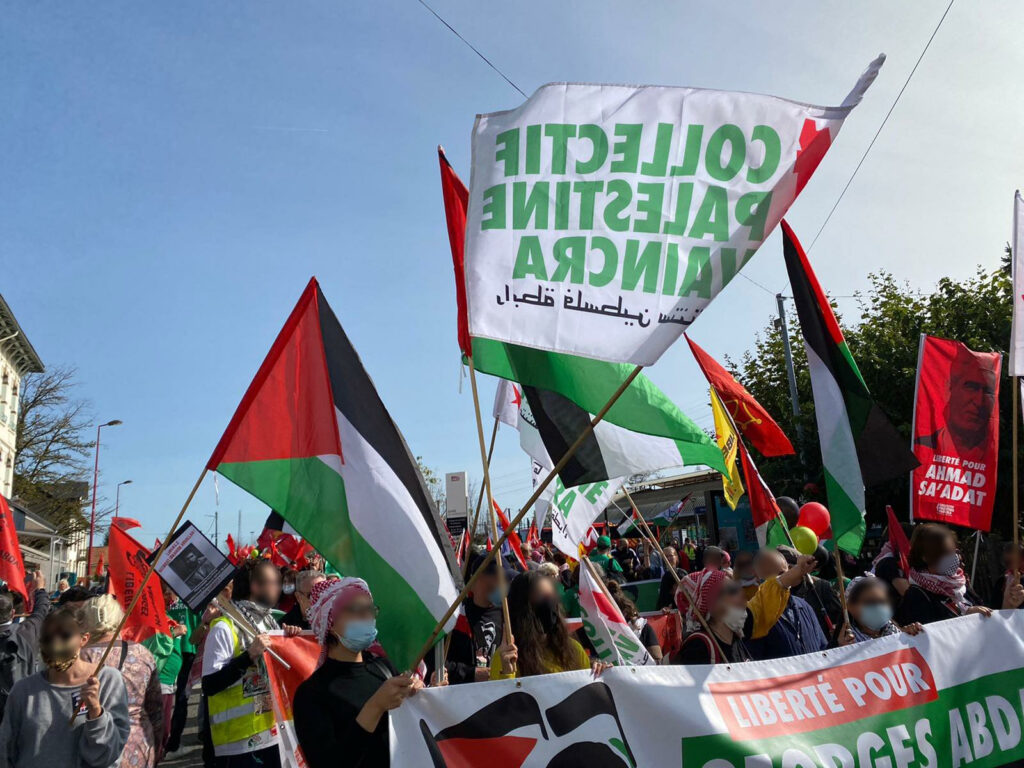 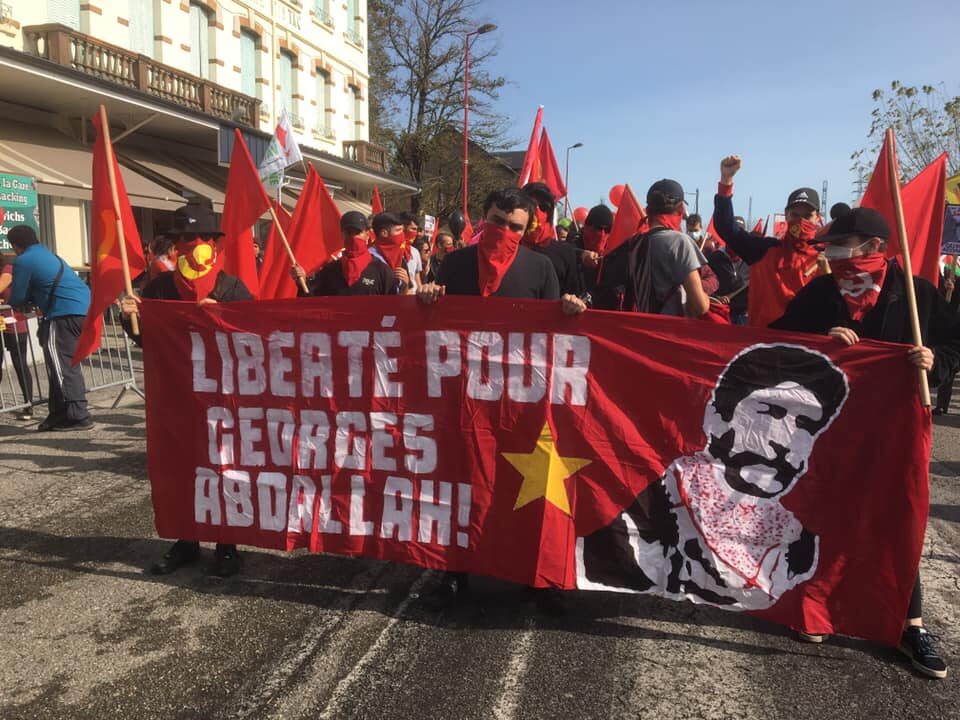 The demonstration, which marched from the Lannemezan station to the prison gates, concluded with a tribute to activists in the solidarity campaign who died recently and the release of balloons in red, black, green and white, the colors of Palestine. This was followed by a statement from Georges Abdallah specifically for this event. He pointed out: “More than ever, the Palestinian masses, despite the betrayals of the bourgeoisie, assume their role as the true guarantor of the interests of the people. Faced with the occupation and the barbarity of the occupier, the first legitimate response that must be displayed above all else is solidarity, all solidarity, with those who with their blood face the occupation armies. The conditions of detention in Zionist jails are getting worse every day and, as you know comrades, to confront them, international solidarity is proving to be an essential weapon. Naturally, the Palestinian popular masses and their revolutionary vanguards can always count on your mobilization and active solidarity.” 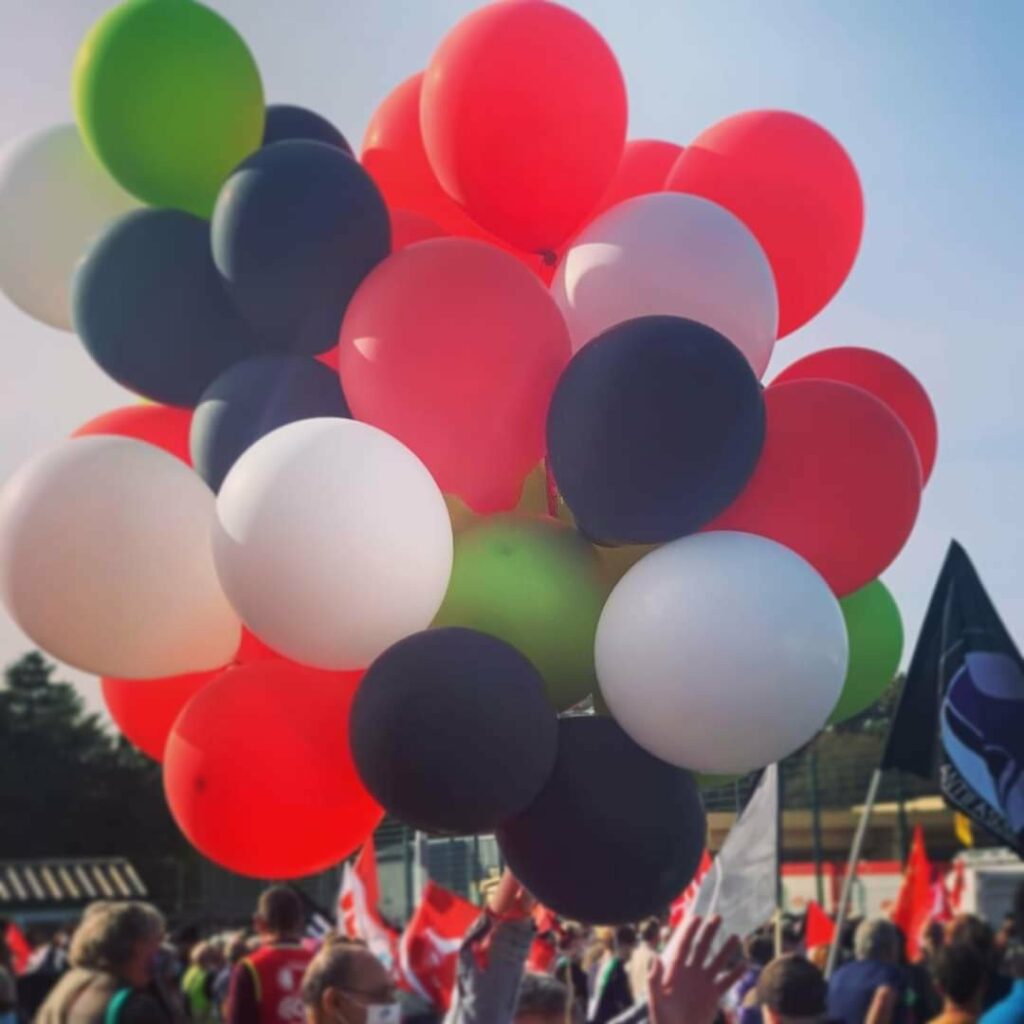 A joint statement from a number of organizations and support committees, including Samidoun and Collectif Palestine Vaincra, was read out next (read the full statement below). The statement noted: “To struggle for Georges Abdallah and with Georges Abdallah…is to struggle alongside the Palestinian resistance, for the realization of all the rights of the Palestinian people, including the right of return of all refugees, in support of the Intifada, for Palestinian youth, for resistance heroes held captive in Zionist jails; it is to support the Palestinian revolution and to fight against normalization and all forms of liquidation. It is clearly to position oneself against all forms of prevarication, compromise, negotiations and endless illusions which only aim to liquidate the Palestinian national liberation movement or to reduce it to a simple humanitarian issue. It means supporting the resistance by all means for the benefit of the interests of the Palestinian people and the peoples of the region.” 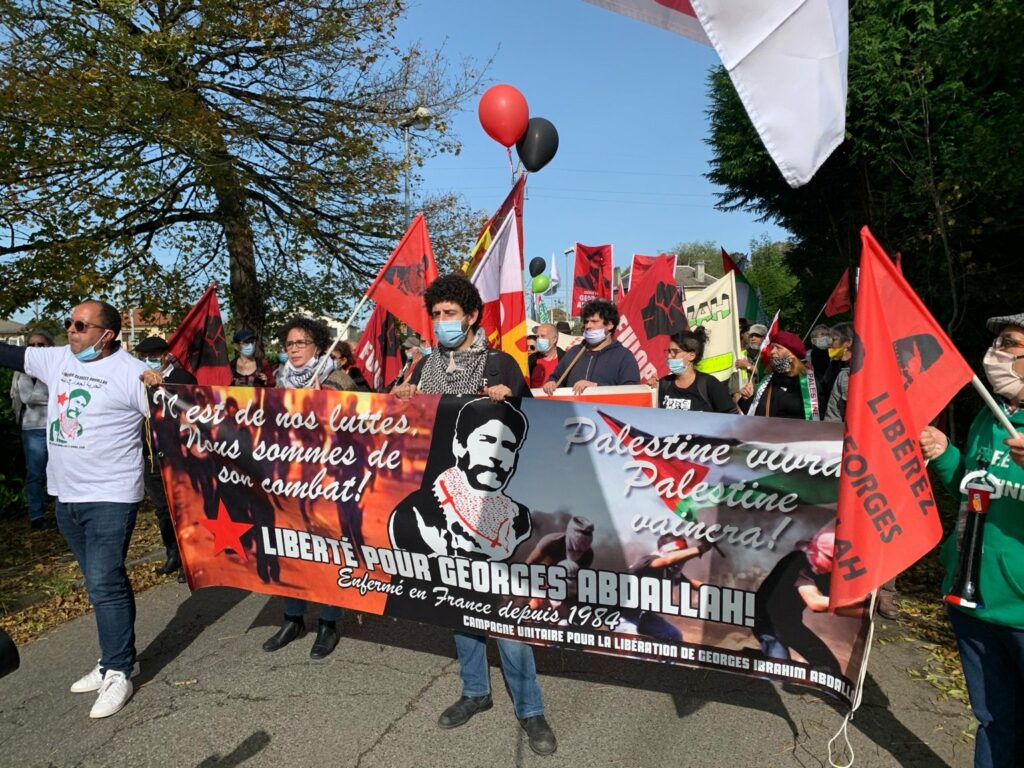 The Lebanese Campaign for the Release of Georges Abdallah also provided a statement, read outside Lannemezan prison. The statement underlined the hypocrisy of Western governments by recalling that “today the thousands of political prisoners in Zionist prisons, the thousands of refugees in Lebanon, Syria and elsewhere are the witnesses the occupation and expansion of this entity. ‘Don’t talk about it, you risk penalties.’ But if you normalize with the Zionist entity, you are going to be called ‘free,’ you see comrades? The regime in Saudi Arabia and the United Arab Emirates are part of the free world of the USA!”

Alongside the demonstration at Lannemezan prison, actions also took place around 24 October in a number of cities, including Brussels, Gothenburg, Frankfurt, Geneva, Tunis, Beirut, Valparaiso, Ramallah and Gaza.

The international month of action for Georges Abdallah is coming to an end and it has been a real success. Despite the difficult health context, the Collectif Palestine Vaincra led an information campaign in Toulouse on the case of Georges Abdallah by distributing 10,000 flyers, 900 posters and nearly 5000 stickers while organizing with other groups to bring a large contingent of people from Toulouse to the Lannemezan demonstration. This encourages us to redouble our efforts, to continue and intensify the campaign for his release so that Georges Abdallah may finally return to his country, Lebanon.

More than ever, Palestine’s victory is certain! 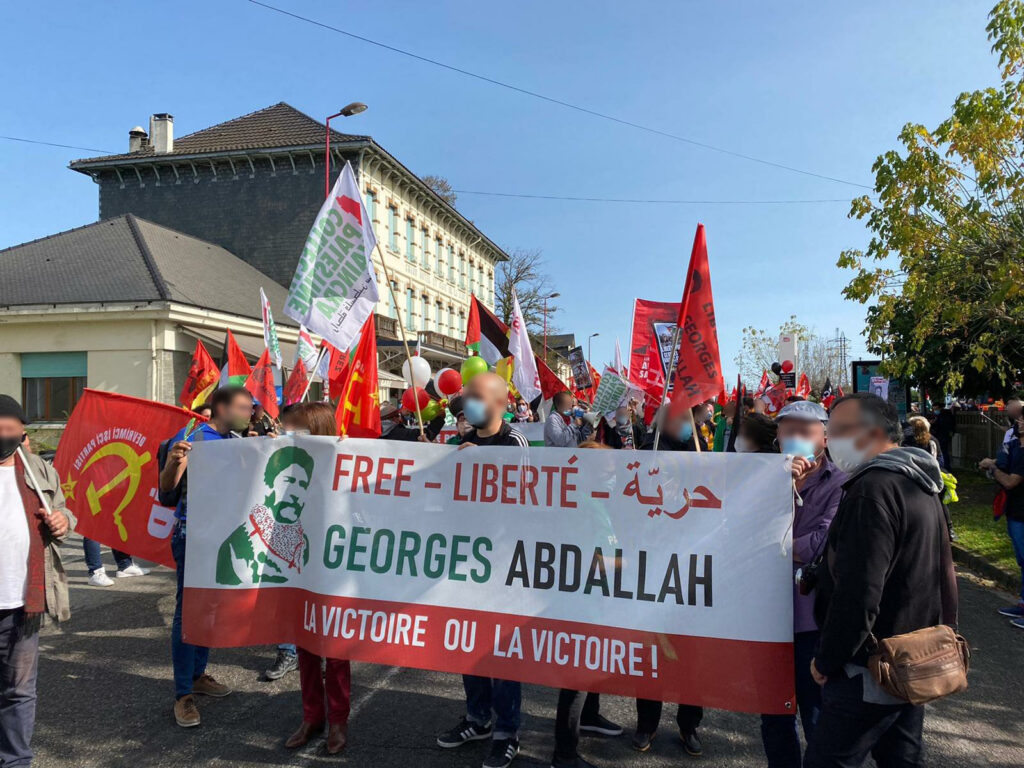 To get involved in the campaign to free Georges Abdallah, please contact us at Samidoun our our comrades at the Collectif Palestine Vaincra.

IT IS VICTORY OR VICTORY!

Here we are, for the tenth consecutive year, in front of the Lannemezan penitentiary center. Ten years already during which we have, here as elsewhere, denounced the detention of our comrade Georges Abdallah, demanded the imperative need for his release and reaffirmed our unconditional support for the great resistance fighter that he is and for the struggles that he has never ceased throughout his life.

Ten years already, but also 36 years in prison and a whole life of struggle of this unwavering awareness that Georges Abdallah expresses with each of his statements – and which we make our own – that another world is not only possible but necessary.

Because we know well, listening or reading attentively to each of his statements – as we have just done now – that to fight for Georges Abdallah and with Georges Abdallah, is, in this war of class against class: to struggle against the capitalist, imperialist, colonialist and neocolonialist system, synonymous with occupation, exploitation and domination, which is now – as our comrade himself says – nothing more than “barbarism, “destruction of humanity” and “waste of resources.”

It is a struggle to hold accountable those who thought and believed themselves untouchable. It is a struggle alongside the masses and working-class neighborhoods who vigorously and resolutely denounce injustice, police violence and repression, corruption, the carelessness of the authorities and who fight relentlessly, sometimes in quasi-insurrectionary uprisings, for their achievements and their rights.

It means fighting against all forms of repression that are used by exceptional regimes, full voted powers, etc. in France, states of emergency, anti-terrorist laws, laws against so-called separatism, curfews, “the 49-3” and permanent ordinances, our fundamental freedoms are curbed and give carte blanche to the police and judicial repressive forces.

Struggling for Georges Abdallah and with Georges Abdallah, as we well know, also means opposing all forms of reactionary nationalism and its appalling emanations – which have been particularly noticeable in recent days – and upholding internationalism without fail.

It is to be by the side of people everywhere in the world and to support, in full solidarity, their struggles and their resistance.

Georges Abdallah, your struggles are ours, and we are more and more numerous everywhere in France and the world, demanding your liberation. A thousand initiatives of solidarity blossom everywhere to raise this demand and to reaffirm to the highest levels of the state of the imperative need addressed to the Minister of the Interior: “he must sign.”

With your conscience, we know that it is always, and especially in your case, true that at the level of these authorities, everything is decided politically – this is far from a judicial game being played, above all in the service of the ruling class. We are well aware that the decision not to release you is a political decision, and this is why we must be very clear that we battle on the political terrain.

The journey toward freedom and liberation is long, full of pitfalls and contradictions, but here, again, if there is one affirmation of our comrade Georges Abdallah that we make our own, it is the imperative need for struggle and resistance, in the diversity of our expressions and the convergence of our commitments, so that the liberation of our comrade can finally be translated into action and because “it is together and only together” that we will win, “for victory or victory!.”

ABDALLAH, ABDALLAH, YOUR COMRADES ARE HERE!
HE IS WITH OUR STRUGGLES, WE ARE WITH HIS STRUGGLE!
FREE GEORGES ABDALLAH!