As Maher al-Akhras enters his 100th day of hunger strike, the international campaign to support his struggle for freedom continues to go, even as he faces a dire medical condition and a deliberate policy of “slow death” and execution by the Israeli regime. The 49-year-old Palestinian father of six has been on hunger strike since 24 July, when he was seized by Israeli occupation forces and ordered to administrative detention, imprisonment without charge or trial.

Join us at 10 am Pacific time, 1 pm Eastern time, 6 pm British and Irish time, 7 pm central Europe, 8 pm Palestine time on Tuesday, 3 November, for a social media campaign to demand freedom for Maher al-Akhras and to make clear that the people’s movements and all those who love justice in the world stand with him and his fellow Palestinian prisoners – and the Palestinian people. Follow @SamidounPP on Twitter for the hashtag and more details. There are many calls to action and ways to participate – we’ll be sharing several below. Join us: stand with Maher al-Akhras, stand for Palestinian freedom!

Within Our Lifetime-United for Palestine has called for a photo campaign in solidarity with Maher al-Akhras, asking participants to take a photo of themselves with a solidarity sign and tag @wolpalestine on Instagram to build a massive solidarity campaign for the 100th day of hunger strike. 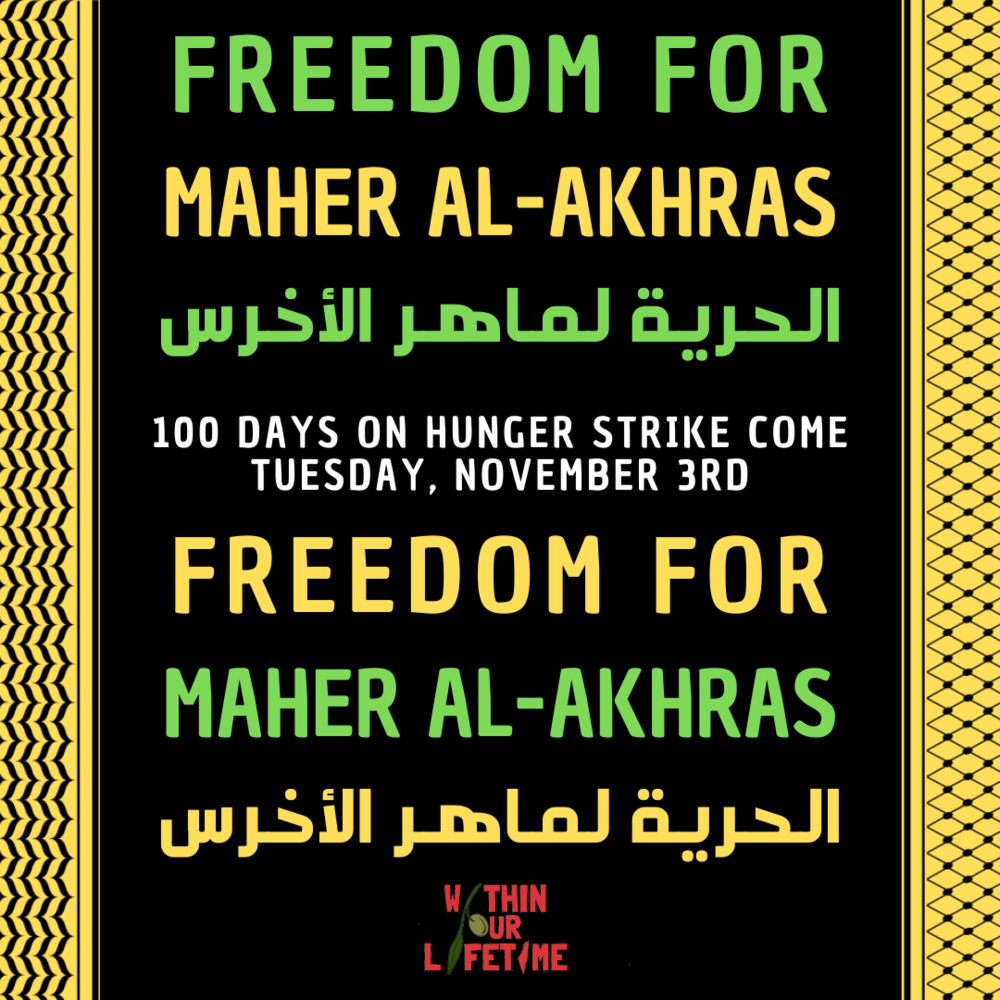 Samidoun Network in occupied Palestine is organizing a demonstration with the families of the prisoners and martyrs on 3 November at 4:30 pm at Manara Square in Ramallah, occupied Palestine, to march for Maher al-Akhras and his fellow Palestinian prisoners. 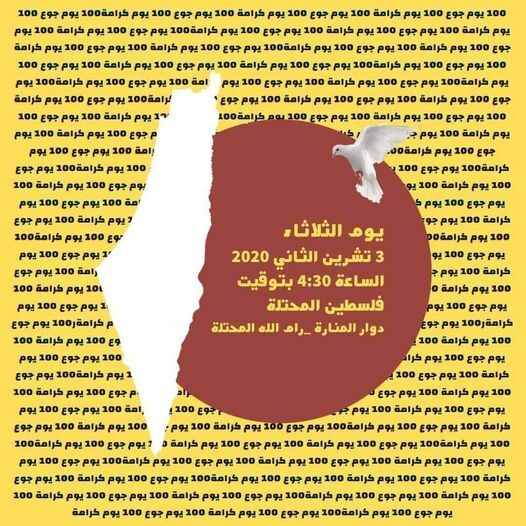 Al-Akhras has rejected various attempts to compel him to end his hunger strike, including a bogus “suspension” of his administrative detention (to be reimposed after the improvement of his health) and alleged offers to release him at the end of his detention orders on 26 November. Well aware of the history of Israeli officials repudiating agreements with prisoners to end hunger strikes only to extend their detention and intensify repression – and as a clear matter of principle, he has rejected such proposals, insisting on his freedom, even at the cost of his death.

Activists have shared videos of al-Akhras, where he is restrained in a hospital bed at the Kaplan Medical Center, clearly suffering from the effects of his hunger strike. His hearing, vision and ability to speak have declined significantly, his vital organs are at immediate risk and he has lost dozens of kilos of weight. In essence, Maher al-Akhras is being executed without charge or trial due to Israeli intransigence and insistence on maintaining their unjust and arbitrary detention order.

The case also clearly indicates the deep involvement of the Israeli judiciary within the colonial system, with the Israeli Supreme Court rejecting al-Akhras’ appeals on four occasions, on 23 September, 1 October, 12 October and 27 October, making clear once more that these systems are deeply entrenched in the violent system of colonization, apartheid and occupation.

International support and solidarity with Maher al-Akhras is growing. Michael Lynk, the UN Special Rapporteur for the occupied Palestinian territories, called for the immediate release of al-Akhras and an end to the practice of administrative detention. The International Association of Democratic Lawyers urged al-Akhras’ immediate release and called on governments, including the U.S. government and European governments, to end their support for Israeli war crimes and crimes against humanity.

Irish activists in Ireland and in the diaspora launched a rolling hunger strike in support of al-Akhras, a campaign that is now being echoed by the Anti-Imperialist Front, with activists in Donbass, Greece, Italy and Austria joining in a rolling solidarity strike starting on 2 November.

In Toulouse, France, the Collectif Palestine Vaincra organized an “ad hack” poster campaign to demand freedom for al-Akhras and documented many international actions, including protests in New York, Vancouver, Dublin, Cologne and elsewhere.

In Paris, activists with CAPJPO-EuroPalestine launched a solidarity photo campaign to demand al-Akhras’ liberation. Even as France has gone back to widespread coronavirus quarantine preventing in-person actions, they have continued the online demonstration. CAPJPO-EuroPalestine is continuing to collect photos at info@europalestine.com.

Organizers and activists in Sweden have also continued the campaign of photos and solidarity with al-Akhras:

These are just a small number of the initiatives being announced by organizers all over the world. In Germany, Samidoun Deutschland launched a solidarity video in German urging al-Akhras’ liberation, below:

1. Join the social media campaign on Tuesday, 3 November at 10 am Pacific time, 1 pm Eastern time, 8 pm Palestine. We will launch a new hashtag for maximum impact. Follow @SamidounPP on Twitter for the hashtag, sample tweets and more. Let us flood social media with demands for Maher al-Akhras’ freedom on his 100th day of hunger strike!

2. Join the picture and solidarity campaigns. Send your photos to Within Our Lifetime – United for Palestine, CAPJPO-EuroPalestine and more.

3. Sign the petition. Join over 3,000 people who have already raised their voices to international human rights groups Amnesty International, Human Rights Watch, the International Committee of the Red Cross and the UN High Commissioner on Human Rights to take action for Maher al-Akhras. The ICRC in particular has failed to live up to its responsibilities to protect Palestinian prisoners, calling on the political prisoner jailed without charge or trial to “find a solution” with the occupying power violating his rights.

4. Organize creative actions. Ad hacks, postering and other outdoor actions can draw a significant amount of attention to Maher al-Akhras and the Palestinian cause at this critical time.