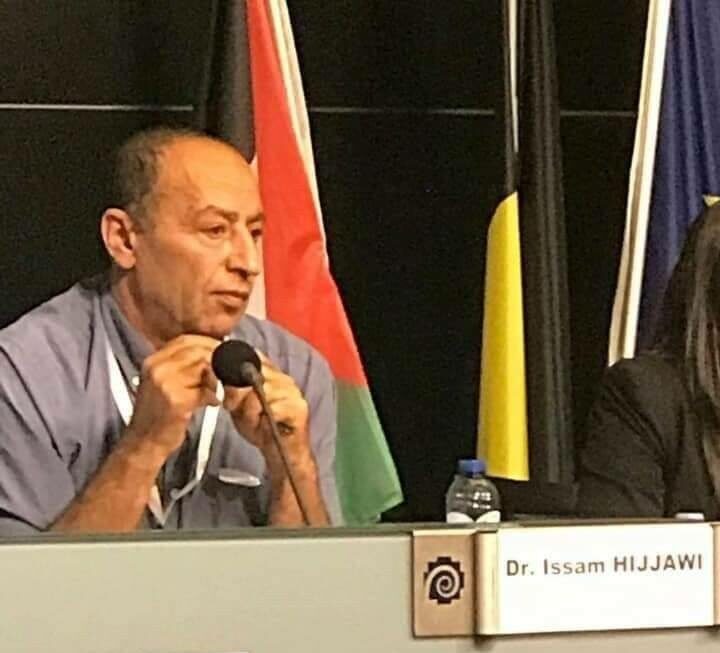 Dozens of organizations, including Samidoun Palestinian Prisoner Solidarity Network, signed a collective statement urging the immediate release of Palestinian doctor Issam Hijjawi Bassalat, imprisoned in the British-occupied north of Ireland in Maghaberry Prison with Irish republican activists of Saoradh targeted by an MI5 agent who infiltrated the party.

This came as Scotland Against Criminalising Communities raised urgent attention about his declining medical situation inside the prison and the denial of necessary and timely medical care. Samidoun Palestinian Prisoner Solidarity Network urges solidarity and action in support of Dr. Issam Hijjawi Bassalat and his fellow political prisoners, the Saoradh 9.

The statement follows below:

We, the undersigned community and civil society organizations in Britain, Europe and around the world, call upon you to act quickly to immediately release British citizen and Palestinian organizer, Dr. Issam Hijjawi Bassalat, from British detention in Northern Ireland. We were shocked and taken aback by his arrest on 22 August 2020 by the British security services at London Heathrow Airport following his return from Dubai.

Dr. Issam Hijjawi Bassalat is a medical doctor, married and a father, and has been practicing medicine for many years in hospitals in Scotland, where he is a member of the British Medical Association. In addition, Issam is a prominent activist in the defense of Palestinian rights, and he works with many organizations and institutions active in solidarity with the Palestinian people in European countries, particularly the European Coordination of Committees and Associations for Palestine (ECCP), which brings together dozens of associations in support of the Palestinian people from 28 European countries.

Finally, Dr. Issam Hijjawi Bassalat, as part of his activities, communicates with many sympathetic political, trade union and social organizations in Britain, Europe, the Arab world and Latin America, with the aim of expanding the circle of international solidarity with the just cause of the Palestinian people. He frequently participates in conference and meetings in solidarity with Palestine, both in Europe and internationally.

Dr. Issam Hijjawi Bassalat is well-known for his commitment to freedom, equality, justice and human rights, and for his support for the oppressed peoples of the world. Since 16 September 2020, he and his nine detained comrades have been on a hunger strike. Not only has Issam been unfairly denied bail based on sensationalistic and exaggerated allegations, he has also been subjected repeatedly to isolation. This has been justified as a COVID-19 protection; however, other detainees at the same prison have not been re-isolated after returning from medical testing. This ongoing isolation appears to be punitive and targeted.

We urge you once more to immediately respond to the demands of the hunger strikers and to release Dr. Hijjawi Bassalat and his comrades.

Scotland Against Criminalizing Communities reported that Dr. Hijjawi Bassalat has faced further decline in his medical condition while imprisoned. Prior to his arrest, he had suffered a spinal injury; he launched a hunger strike with 50 Irish republican prisoners when he was repeatedly subject to COVID-19 isolation in a space with little room for exercise, which alleviates some of his pain. Since that time, he has continued to experience intensified pain and needs crutches to walk, making surgery a likely necessity.

Nevertheless, the prison has so far failed to hand over his medical records as requested to a qualified neurosurgeon, leading to further delays in his treatment.

SACC Chair Richard Haley wrote yesterday, 8 November, to the Governor of Maghaberry Prison asking him to ensure that Dr. Bassalat is provided with prompt access to the medical care he needs.

Thank you for your email of 28 October regarding Dr Issam Hijawi Bassalat, a remand prisoner at HMP Maghaberry. I am writing to you again because Dr Bassalat is continuing to experience difficulties in accessing the medical care that he needs.

Dr Bassalat suffers from a neurological problem resulting from a disk prolapse. His condition continues to deteriorate. He is experiencing continuous severe pain and now needs crutches in order to walk. It seems probable that he will require surgery.

Dr Bassalat’s neuro-surgeon needs access to medical records held by HMP Maghaberry in order to decide on the best course of action. I understand that the records have not yet been transferred to him. This ought to be simple matter. It appears that it has instead become a significant barrier to the timely provision of appropriate medical care to Dr Bassalat.

The continued neglect of Dr Bassalat’s medical needs is causing him prolonged and needless suffering and could put his health in jeopardy. It also potentially puts HMP Maghaberry in breach of domestic and international law. Any failure to provide adequate health care is apt to create a situation that falls within the scope of the prohibition on inhuman and degrading treatment under Article 3 of the European Convention on Human Rights.

The European Prison Rules and the UN’s Revised Standard Minimum Rules for the Treatment of Prisoners (the Nelson Mandela Rules) are both relevant to any assessment of the adequacy of prison health care. Note in particular that Rule 24 of the Nelson Mandela Rules states “prisoners should enjoy the same standards of health-care that are available in the community”, Rule 26 states “a prisoner may appoint a third party to access his or her medical file” and Rule 27 states “all prisons shall ensure prompt access to medical attention in urgent cases.”

I hope you will intervene to expedite prompt access to Dr Bassalat’s medical records by his neuro-surgeon and anyone else nominated by Dr Bassalat, and that more generally you will ensure that all necessary steps are taken to provide Dr Bassalat with the prompt access to appropriate medical care that he very clearly needs.

I understand that any reply to this letter will engage data protection issues. I therefore urge you to seek Dr Bassalat’s permission to share with me such information as you need to in order to respond meaningfully.

“It’s often said that justice delayed is justice denied. The same might be said about medical care. Dr Bassalat has been suffering for too long. He went into prison on his feet and is now on crutches. Maghaberry Prison must stop putting obstacles between Dr Bassalat and the treatment he so obviously needs.”