Home News March in Berlin and actions throughout Germany take to the streets for...

The march was enthusiastic and led by Palestinian youth, and many organizations delivered speeches and greetings at the event. The march was also joined by the Palestinian and Arab Institutions and Associations in Berlin.

Members of Samidoun delivered powerful messages in Arabic and German, saluting the struggle of 4,500 Palestinian prisoners behind Israeli bars and demanding freedom for all imprisoned strugglers. They carried banners and posters calling for the liberation of Georges Ibrahim Abdallah, the Lebanese Arab struggler for Palestine imprisoned in French jails for over 36 years. 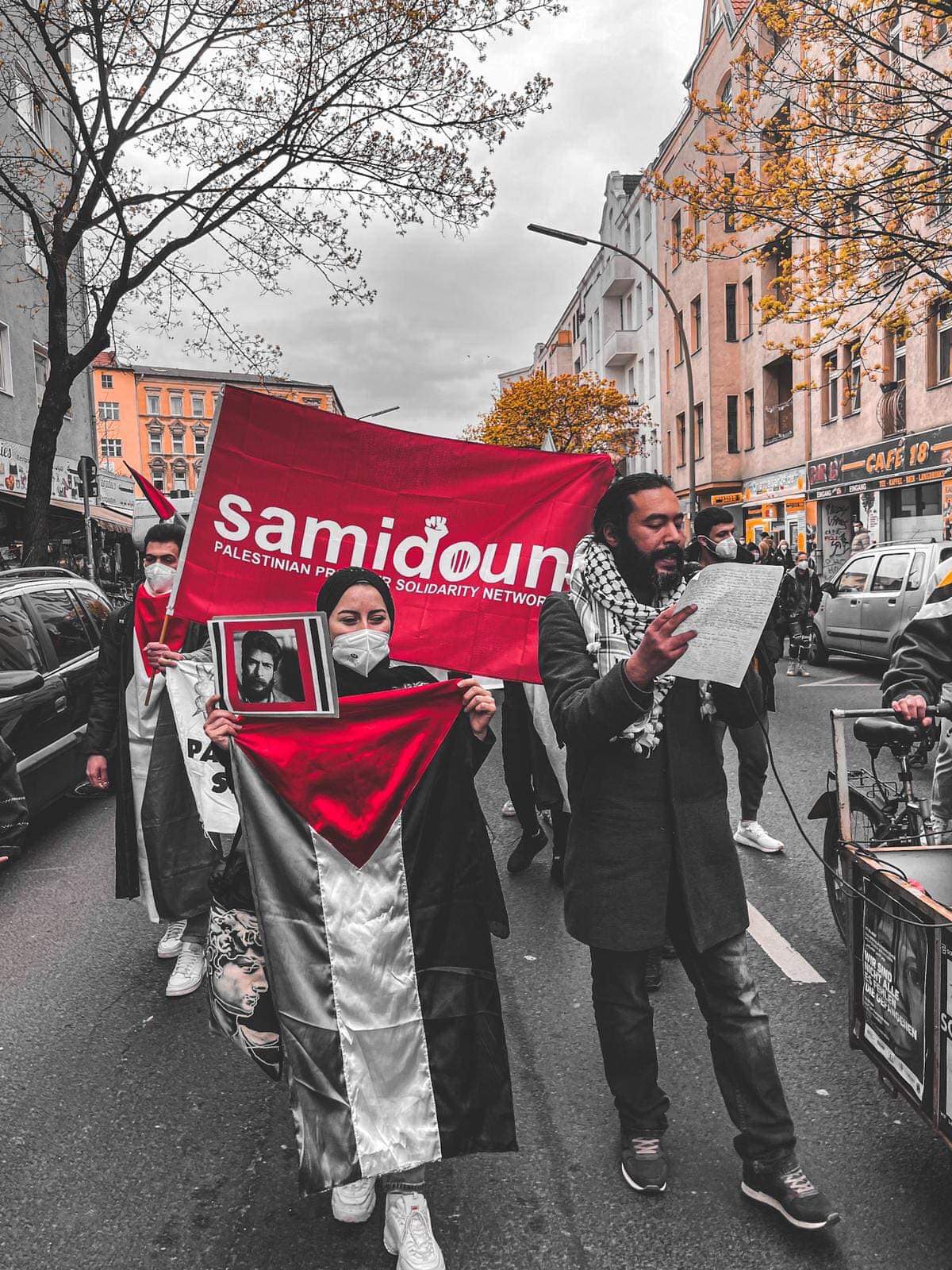 In the Samidoun speech at the rally, the speakers declared:

“The Palestinian prisoner movement was, and will remain, the shield of Palestinian and Arab resistance on the front line. The Palestinian prisoners are the advanced revolutionary corps struggling inside the furnaces of steadfastness and detention, within the dungeons of daily confrontation, engaged in a daily battle of confrontation that does not cease….As we sacrifice one hour of our time for them in this march, we must also remember that they are giving their whole lives for us, and for the liberation of Palestine, from the river to the sea.”

Today, from Berlin, we declare clearly: The prisoners’ movement represents all of us, so today, when we raise our voices for their freedom, we are also calling out for the people of Ain el-Helweh, Yarmouk, Neirab, Wehdat, Bourj al-Barajneh and Beddawi camps… We are continuing our struggle with them today, continuing the march of the revolution, liberation and return, the march of the revolutionary struggle, from the legacy of the martyrs and wounded who struggled in Palestine in 1936, who struggled in Palestine in 1936, in Beirut, in the Jordan Valley, in the Golan, and who were martyred on the borders of Palestine…”

We need the prisoners more than they need us. It is our duty to raise the voice of the prisoners to the world and to all Palestinian communities in exile and diaspora, and raise their voice in unions, universities, factories, streets, parliaments, schools and all areas.” 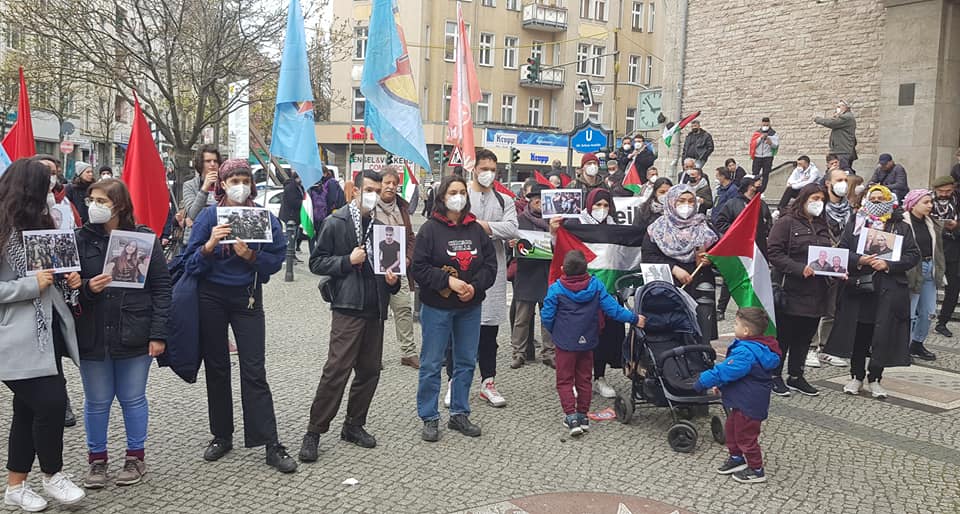 “On this basis, we call today for:

First, exposing the crimes of the Zionist occupation against the Palestinian people and the brave Palestinian prisoners before the German and international public. We hold the German government accountable for its bias in favor of colonialism and Zionist crimes, and call upon it to respect German and international law and stand against these practices instead of justifying them in the right-wing, racist media.

Second,…Samidoun Network calls for unified action to build a wider movement for a comprehensive boycott of all occupation products and institutions. Building the boycott also means opposing normalization with Zionism.

Third, organizing for the liberation of the imprisoned hero, the struggler Georges Ibrahim Abdallah, who is for us a revolutionary model of steadfastness and an integral part of the Palestinian prisoners’ movement, to achieve his freedom from French prisons after 37 years of detention.

They concluded by calling on attendees’ to join and mobilize for the 15 May March for Return and Liberation in Berlin. 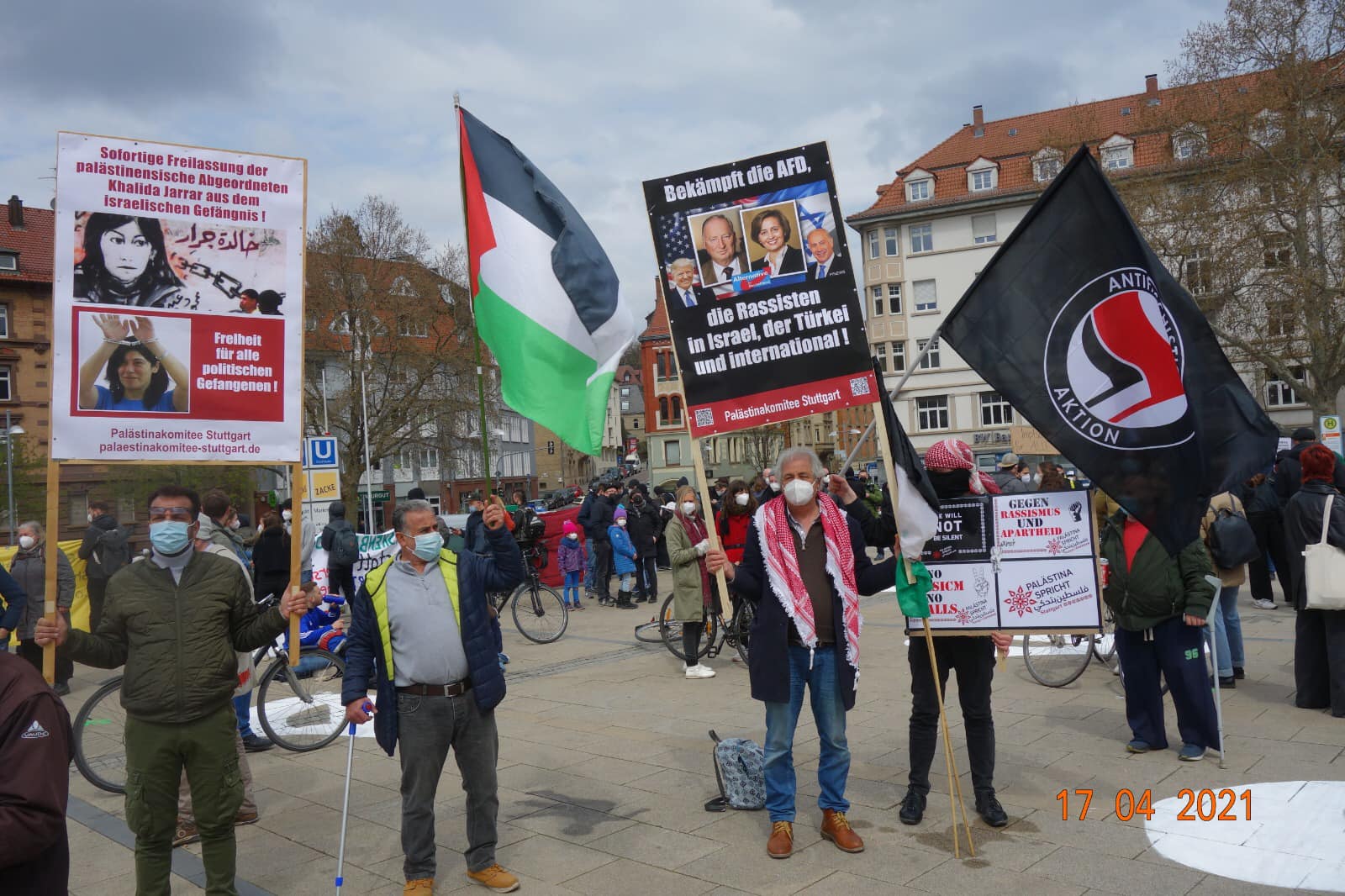 The demonstration in Berlin was also accompanied by many actions and protests throughout Germany for Palestinian Prisoners’ Day. 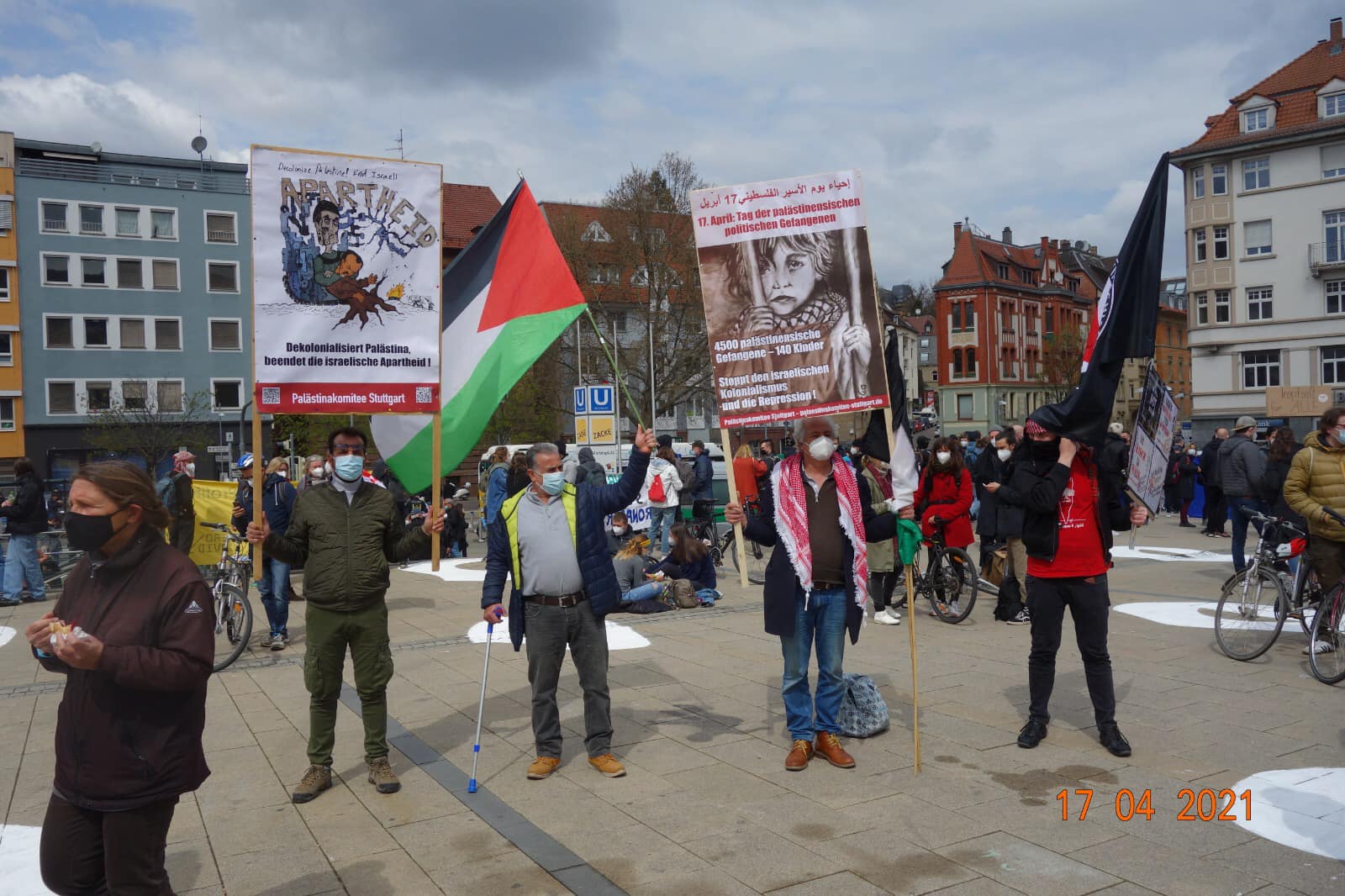 In Stuttgart, the Palästinakomitee Stuttgart, together with several organizations, joined in an anti-racist and anti-fascist demonstration in the city with signs, banners and Palestinian flags to mark Palestinian Prisoners’ Day. The committee drew attention to the campaign to free Palestinian students and highlighted the conditions and unjust detention of Palestinian political prisoners in Israeli jails.

In Frankfurt, members of Samidoun Deutschland organized a public display on the imprisonment of Palestinian students, with large posters and collages of the photos of jailed students in Israeli prisons. They set up a wooden chair to illustrate the stress positions and forms of torture used by Israeli interrogators against Palestinian students and other political prisoners. 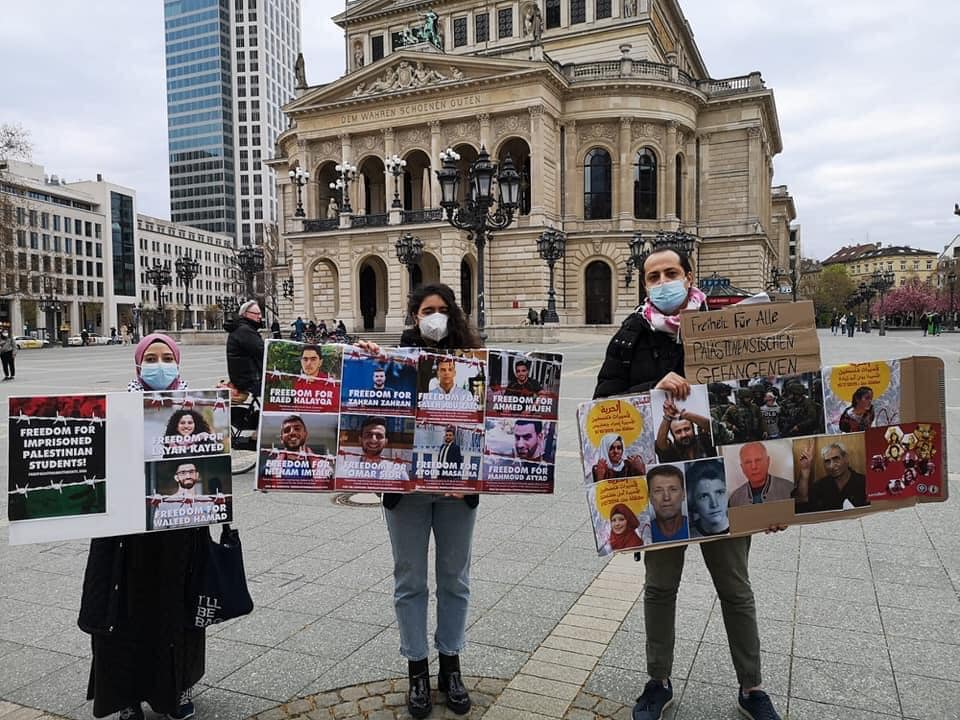 Palestinian and Arab community organizations in Germany also organized sit-ins and actions in Köln, Koblenz and elsewhere. There are more events and actions still to come as part of the Week of Action for Palestinian prisoners in cities and communities around the world. 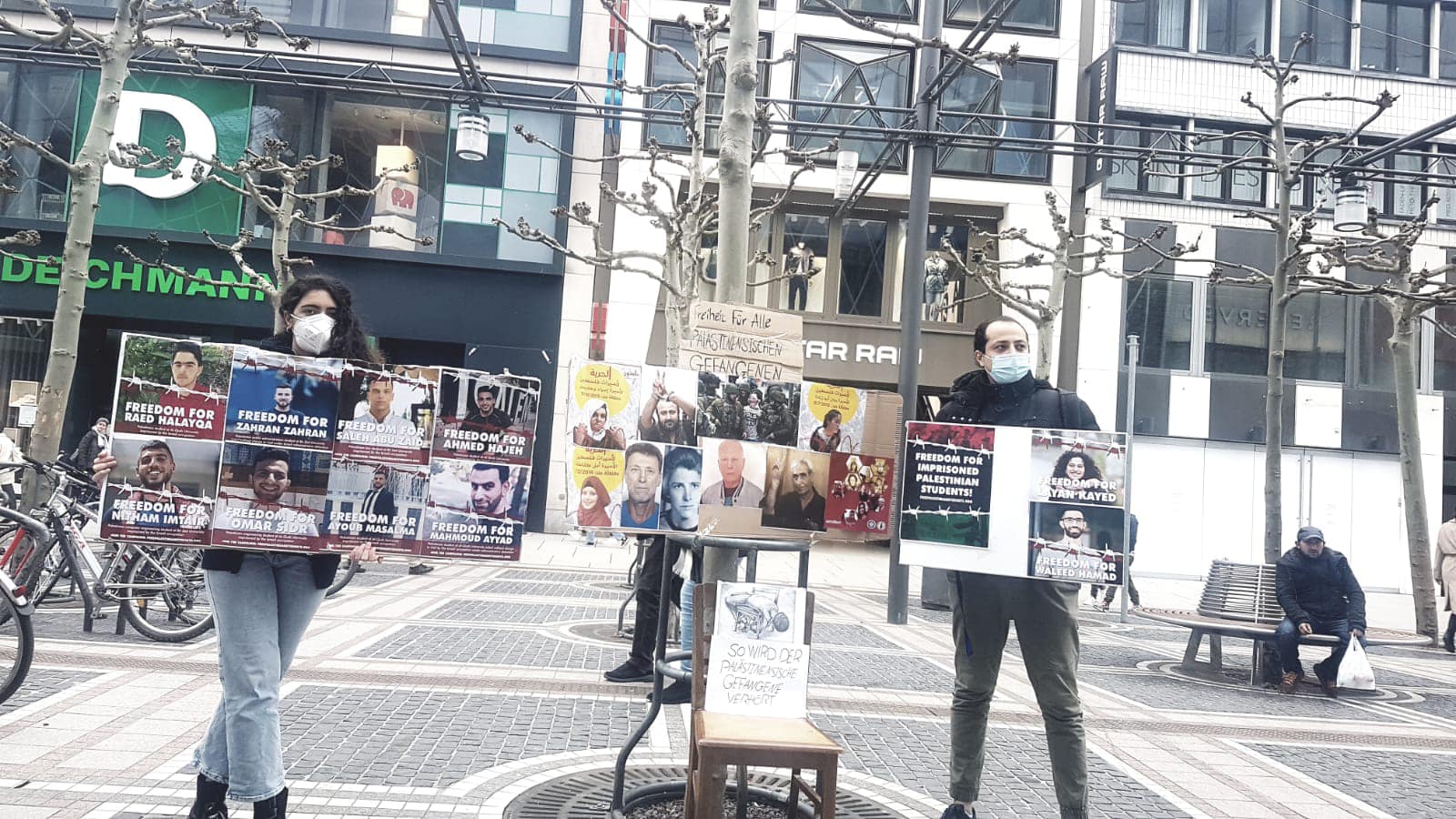