Halifax: Day of Rage – No to Annexation 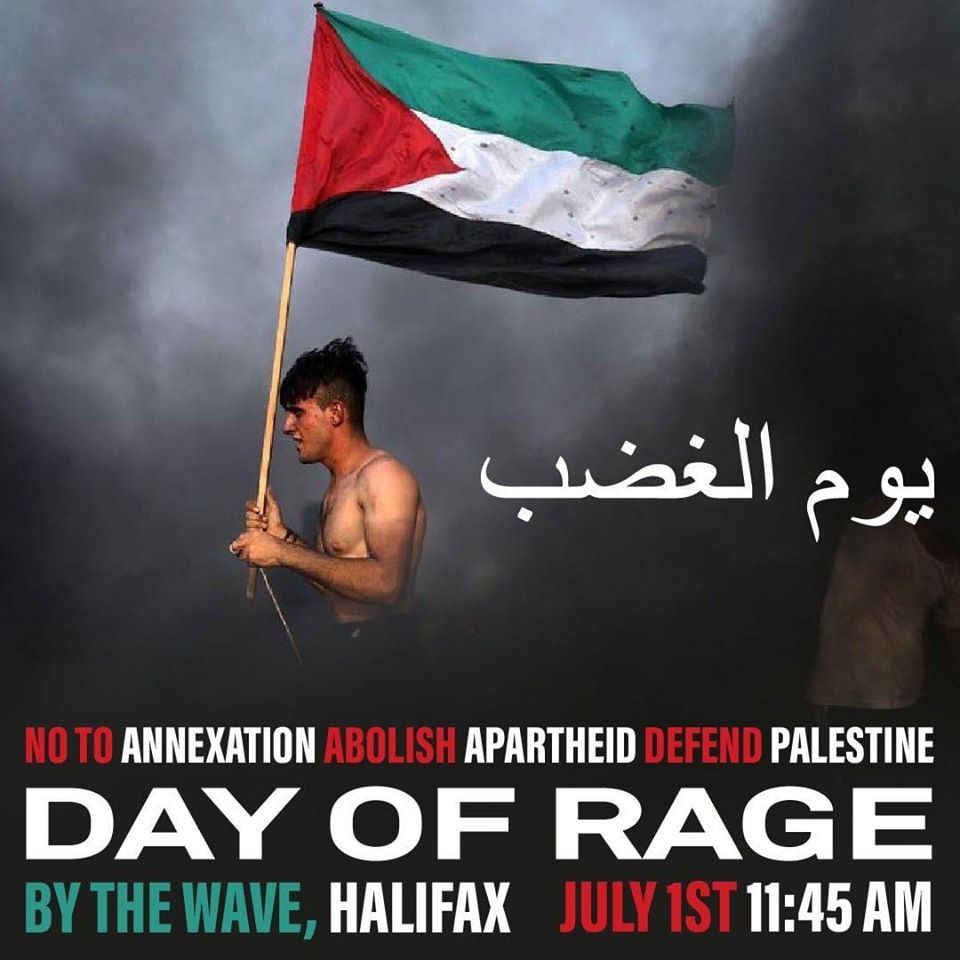 Join the Day of Rage, July 1st, as we gather in rejection of the illegal occupation and annexation of the West Bank.

We would first like to acknowledge that this rally will take place in K’jipuktuk, on unceded Mi’kma’ki territory.

“Al-Awda, the Palestine Right to Return Coalition, calls upon all Palestinians and supporters of justice in Palestine in the United States and around the world to join in the global efforts for a Day of Rage on July 1st, 2020 to confront the U.S.-Israeli efforts to liquidate the Palestinian cause and people”.
(https://al-awda.org/al-awda-prrc-urges-action-to-confront-israeli-annexation-join-the-day-of-rage-july-1/)

Join us as we gather in response to this call to action set forth by the Palestinian Right to Return Coalition, Al-Awda.

Starting July 1st, the israeli government plans to further occupy the Palestine, annexing a total of 30-40% of land in the West Bank, further displacing the native Palestinian population and threatening the Palestinian fight for self-determination. This plan is an outright violation of international law and is backed and funded by the USA.

This move comes after the 72nd anniversary of the Nakba (Arabic for catastrophe), the ethnic cleansing of Palestine in 1948 when 750,000 Palestinians were forcibly displaced from their lands. Between 1947 and 1949, 530 Palestinian villages and cities were destroyed, and 15,000 Palestinians were killed to make way for the creation of the nation of israel. (https://www.aljazeera.com/indepth/features/2017/05/nakba-start-1948-170522073908625.html)

Annexation is not a new issue for Palestine. As of 2017 there were 131 official israeli settlements in the West Bank, and another 110 unofficial “settlement outposts”. Some settlements exist within Palestinian cities.
https://www.btselem.org/settlements/statistics

Today, Palestine exists as fragmented areas and has been occupied by israel since 1967. The West Bank is connected by roads which are under surveillance by israeli checkpoints and watchtowers. Palestinians are forced to travel through these roadblocks, which enforce the policing of Palestinians by the IDF and make travel dangerous and exhausting.
A full list of checkpoints can be found here- https://www.btselem.org/freedom_of_movement/checkpoints_and_forbidden_roads

The area of land planned to be annexed, the Jordan Valley, is an important agricultural land mass where 50,0000 Palestinians own around 12,355 acres of agricultural land and supply 60% of the Palestinian vegetable supply. This annexation is a direct threat to Palestinian food security.
(https://www.aljazeera.com/news/2020/05/annexation-jordan-valley-complete-1948-catastrophe-200515111146185.html)

Our Canadian government has long ignored Palestinian human rights and has continued to support Apartheid israel and the building of illegal settlements in the West Bank for years. Our government has not been in shy in publicly defending policies that only serve and legitimize a solution that supports a Jewish only population in Apartheid israel, while condemning grassroots Palestinian rights groups such as BDS (boycott, divest, sanction). https://www.middleeasteye.net/news/asked-reverse-anti-bds-stance-justin-trudeau-doubles-down

We stand in solidarity on this day with our fellow Palestinians who have been silenced and displaced for decades, and to show our government that we will no longer contribute to the suffering and oppression of the indigenous Palestinian population. On this day of rage, we will also be standing in solidarity with our Black and Indigenous communities. This is not a Palestinian only struggle, this is a collective struggle against colonial violence and racist systems. Palestinians will not be free until all peoples are free.

We recognize that we will never be perfect allies, and that anti-racism is a constant state of unlearning, listening, and striving to do better. We are open to any comments, critiques, or suggestions anyone may have on anything we have posted here or on the event itself.