Los Angeles: Day of Rage – No to Annexation of Palestinian Land 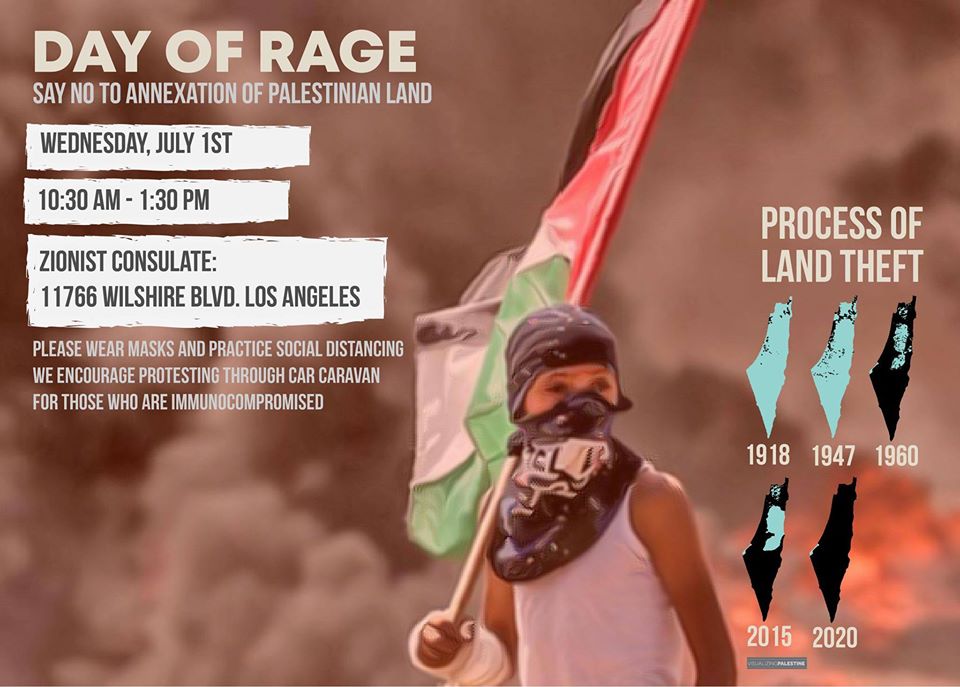 WHEN: 10:30 AM, Wednesday, July 1st
WHAT: Car Caravan and Brief Rally ends before 10:55am, which is when the car caravan will leave the meeting location
WHERE: Car Caravan (COVID-19 safe): Meet at: Westwood Federal Building’s Parking Lot, 11000 Wilshire (at Veteran Ave) we will drive as a car caravan to the Israeli Consulate,11766 Wilshire Blvd (at Granville)

The caravan will leave the parking lot promptly by 10:55 am. Bring your signs, flags and kuffiyehs, to decorate your car. Please gas up your car, beforehand.

***Due to the sudden and dramatic spike in COVID cases in California, Al-Awda PRRC and event organizers of the 7/1 Day of Rage have decided to make the primary focus of this action to be a car caravan. We apologize to those that don’t have access to a vehicle–however, we want to ensure the utmost health and safety of our community first and foremost.***

The SoCal Chapter of Al-Awda, the Palestine Right to Return Coalition, PYM-LA-OC-IE., AMP/LA, JVP/LA, LA4Palestine, Jews for Palestinian Right of Return, and ANSWER Coalition/ LA call upon all Palestinians and supporters of freedom, equality, and justice – in Palestine and around the world, to protest the planned annexation of more Palestinian land on July 1st. We call on the Palestinian community, and those engaged in indigenous/anti-colonial, anti-racist/anti-white supremacist struggles against state violence and racial oppression, to link arms and struggle together in an act of international solidarity!

Join in the car caravan for justice and demand to #DefendPalestine, in support of demonstrations across the U.S. and throughout the world. July 1st let’s take a unified stand against racism and the wars on our communities – locally and abroad, from ongoing and ever-increasing racist settler-colonial violence.
————-
July 1st – Let us stand together in demanding an end to US militarism locally and imperialism abroad, and instead of sending billions in financial aid to Israel and in war and militarism – to spend on our communities at home!

The Zionist state is the hallmark of racial oppression and military repression in the 21st Century. Its murderous military provided the knee-on-neck training to the killer cops in Minnesota and elsewhere. Enough is enough! Let’s end these deadly exchanges.

On Wednesday, July 1st, Los Angeles will join the international fight against the annexation of illegal settlements in the West Bank and large swaths of the Jordan Valley. This annexation will consume the remaining areas of the West Bank under nominal Palestinian control.

We will protest the continued genocide, ethnic cleansing, theft of land, and daily violations committed by the Zionist state.

We will mourn the latest murders by the Zionist military of Eyad Hallaq, 32, killed on his way to special needs school, and Ahmed Erekat 27, on his way to pick up his sister from the beauty parlor on the night of her wedding.

We also call on those who support the Palestinian struggle to uplift the Movement for Black Lives here as the best way to express true international solidarity. Palestinian liberation cannot be achieved without Black and Indigenous liberation, without the liberation of all oppressed peoples.

“This is not about one bad Israeli soldier, just as it’s not about one bad cop ever. This is a system. It is an apartheid system. It is a settler-colonial system that enshrines Jewish Israeli supremacy as a matter of law and policy on an international scale. And it is one that marks Palestinians for removal, exile or death. And it is done with the full, unequivocal, diplomatic, financial, military support of the United States and with the complicity of the international community.

So it bears upon us to respond to this moment by supporting the Palestinian call for freedom, by doing the little that we can by engaging in boycott, divestment, and sanctions for Ahmed, for Razan, for Iyad, to oppose the annexation, to oppose apartheid, to fight for freedom.”

Please join us in this Day of Rage as we reject the annexation plan and all racist, settler-colonial states, affirm our collective struggle towards liberation and defend our lands and people until freedom!