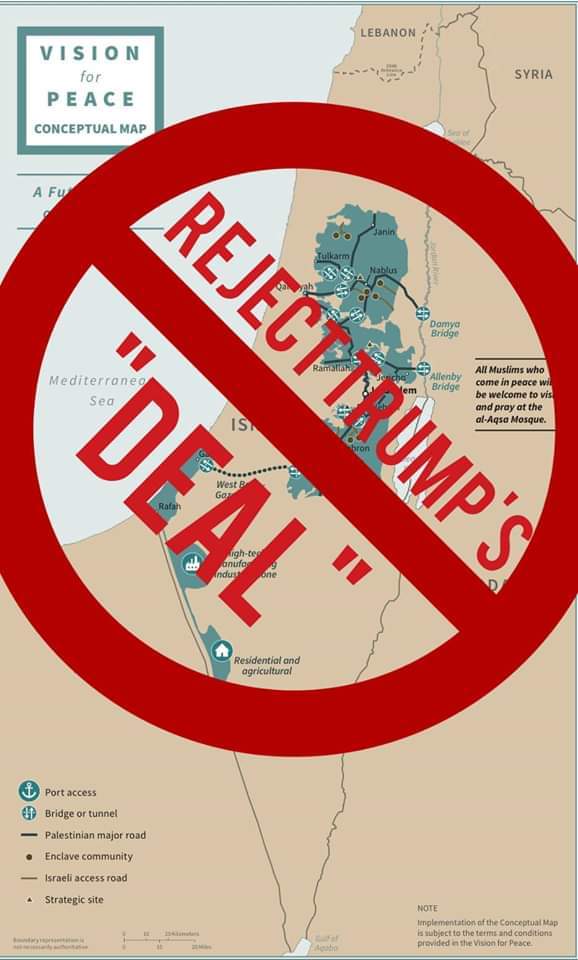 Trump’s “Deal of the Century” is nothing more than an attempt to legalise apartheid and further entrench occupation. Denying Palestinians their collective Right to Self Determination, Right to Return and an end to the Illegal Occupation.

Palestinian Community Association North West and the Palestine Forum have called for a protest this Saturday in Piccadilly Gardens at 1pm, this Saturday (1/2/2020).

The voices of the Palestinians must be heard. They cannot be excluded from negotiating their future and freedom.

72 years after the Nakba, 53 years of Occupation in the West Bank and East Jerusalem. 27 years after the Oslo Accords, this is just another attempt to steal more land and to erase the struggle of the Palestinian people.

Israel has carried out massacres upon the people of Gaza. Murdered and imprisoned Palestinians in the West Bank. Stolen land and water in the Jordon Valley and the West Bank. Expanded settlements, locked up political prisoners and carried out house demolitions. While arms companies and High Street banks continue to make a profit from death and occupation.

How can we allow this happen? Trump’s deal is an attempt for us to forget and look the other.

The streets are changing, people are beginning to see the actions of Israel as illegal and unjust. On his visit to Bethlehem, Prince Charles said “it is my dearest wish that the future will bring freedom, justice and equality to all Palestinians, enabling you to thrive and prosper”. We need to continue to be out on the streets.

No matter how long it takes, we will not abandon the Palestinians nor their struggle.

Come and stand with us.

We ask all those who care about Human Rights, International Law and people of good conscious not to remain silent but to join us this Saturday (1/2/2020) at 1pm in Manchester Piccadilly Gardens.