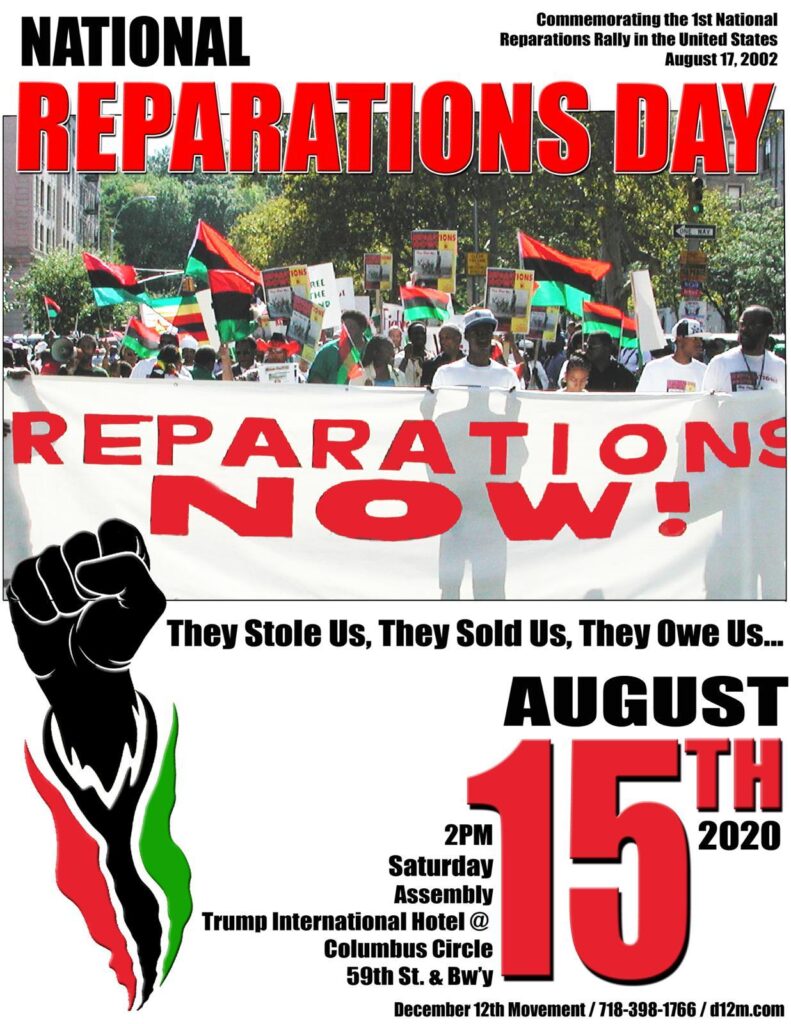 In 2001, at the United Nations World Conference Against Racism in Durban, South Africa, the world declared the Trans-Atlantic Slave Trade and Slavery to be Crimes Against Humanity and that Reparations were due the descendants of the crime victims. The work of the Durban 400 (400 Black people organized by the December 12th Movement and the National Black United Front) was key to this historic victory memorialized in “The Durban Declaration and Program of Action.” Before leaving South Africa, NBUF Chairperson Dr. Conrad Worrill called for the Durban 400 to hold a national rally for reparations.

On August 17, 2002, the 117th anniversary of Marcus Mosiah Garvey’s birth, that first national rally for reparations, the Millions for Reparations, was held in Washington, DC.  Speakers painted a narrative of continuous African oppression from enslavement, through Jim Crow to current day anti-Black structural racism. The crimes had not ended on Juneteenth 1865. They had just assumed different forms. Black people in the U.S. were still not free.

In this summer of 2020, the Black Liberation Movement is at a critical moment. The Covid Pandemic’s devastating multi-faceted effects on the Black community, combined with the refusal of the police and white terrorists to stop murdering Black people in cold blood, have exposed to the world that we are being “disappeared,” that capitalism no longer has a need for us, that we are surplus.

The massive and continuing uprisings across the U.S. in immediate response to the racist slaughter of George Floyd, Breonna Taylor, Ahmaud Arbery and Rayshard Brooks have reminded many of the popular revolts against oppression of the 1960s. The question then as now is what is the key to our liberation. What demand encompasses the many faces of the attacks we suffer?

The December 12th Movement sees Reparations as that key issue.

In the 1960s, both Malcolm X and Martin Luther King, Jr. understood the importance of reparations. In his legendary 1964 speech “The Ballot or the Bullet,” Malcolm presents the U.S. with the only way to attain the first “blood-less revolution” in history.“All [America] has to do is give the Black man in this country everything that is due him.  Everything.“

Similarly Dr. King declared, “America has defaulted on this promissory note insofar as her citizens of color are concerned. Instead of honoring this sacred obligation, America has given the Negro people a bad check which has come back marked ‘insufficient funds’”

This is why we call for all those outraged by what is happening now to join us on August 15th around the country to put forward the demand for Reparations. In New York City we will demonstrate in front of President Trump’s International Hotel, a half block from the statue of Christopher Columbus, the genocidal initiator of our MAAFA. These two embody the continuum of terror, misery and exploitation of Africans in this country.

If you cannot come to NYC, do whatever you can on that day in your locality  Demonstrate.

Organize support for Reparations legislation in your area and for HR40 in the Congress. Make your elected representatives take a position.

But do something to popularize Reparations!

The mass protest and resistance in 50 states and throughout the world is spontaneously forcing this country to make moderate changes which were unthinkable only 6 weeks ago. We have the power, when conscious, focused and organized, to make reparations a reality.

Finally, we are dedicating this National Day for Reparations to our late Brother and Comrade Dr. Conrad Worrill who would have been 79 years old on this day and, were he alive, would be shoulder to shoulder with us in the streets.

What we said in Durban and in D.C. still holds true today.

“THEY STOLE US. THEY SOLD US. THEY OWE US. REPARATIONS NOW”