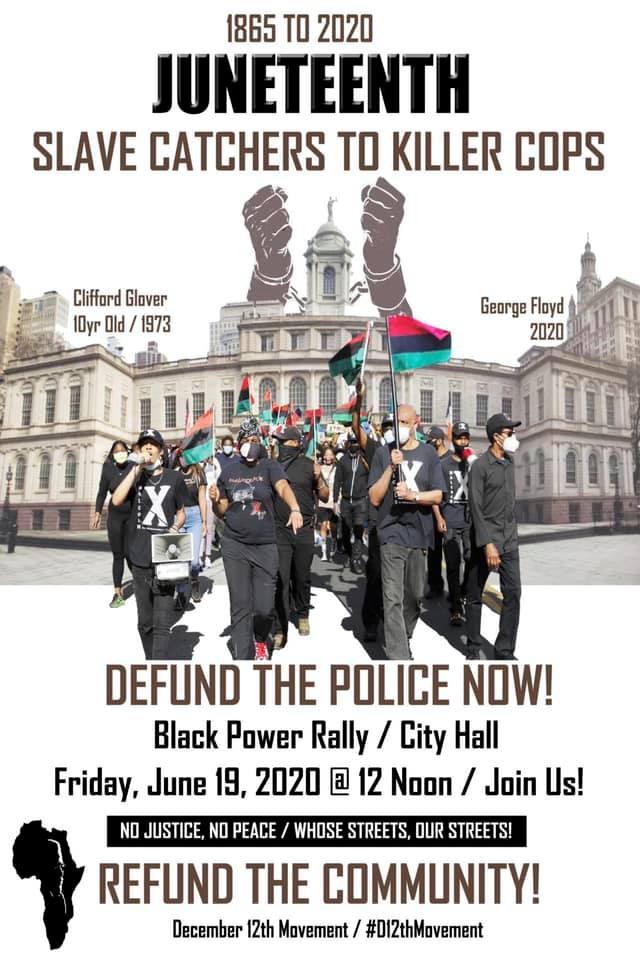 Organized by the December 12th Movement

All out this Friday as we take to the streets on Juneteenth in support of the December 12th Movement and to demand that the city take action to #DefundThePolice and #RefundTheCommunity, one of the concrete demands that have arisen from the ongoing nationwide uprisings against police terror and structural racism catalysed by the brutal murders of George Floyd, Breonna Taylor, Ahmaud Arbery and so many more.

As explained by Iman Essiet, a member of the December 12th Movement, “ We are having this rally on Juneteenth to remind our community that the modern police department has its origin in the Slave Catcher Patrols that were set up to capture and return enslaved Blacks who had escaped their captivity. It is that racist mentality that allows them to still kill us with impunity…It is time to redirect the billions of dollars budgeted to the police to community-based organizations and social agencies which are equipped to address issues such as drug abuse, domestic violence, children’s behavior in schools, mental health, homelessness, unemployment and poverty. Only a mass demonstration by the people of New York City can bring enough pressure to ensure that the Mayor and the City Council will meet the community’s demands to take a step towards ending police terror by defunding the New York City Police Department.”