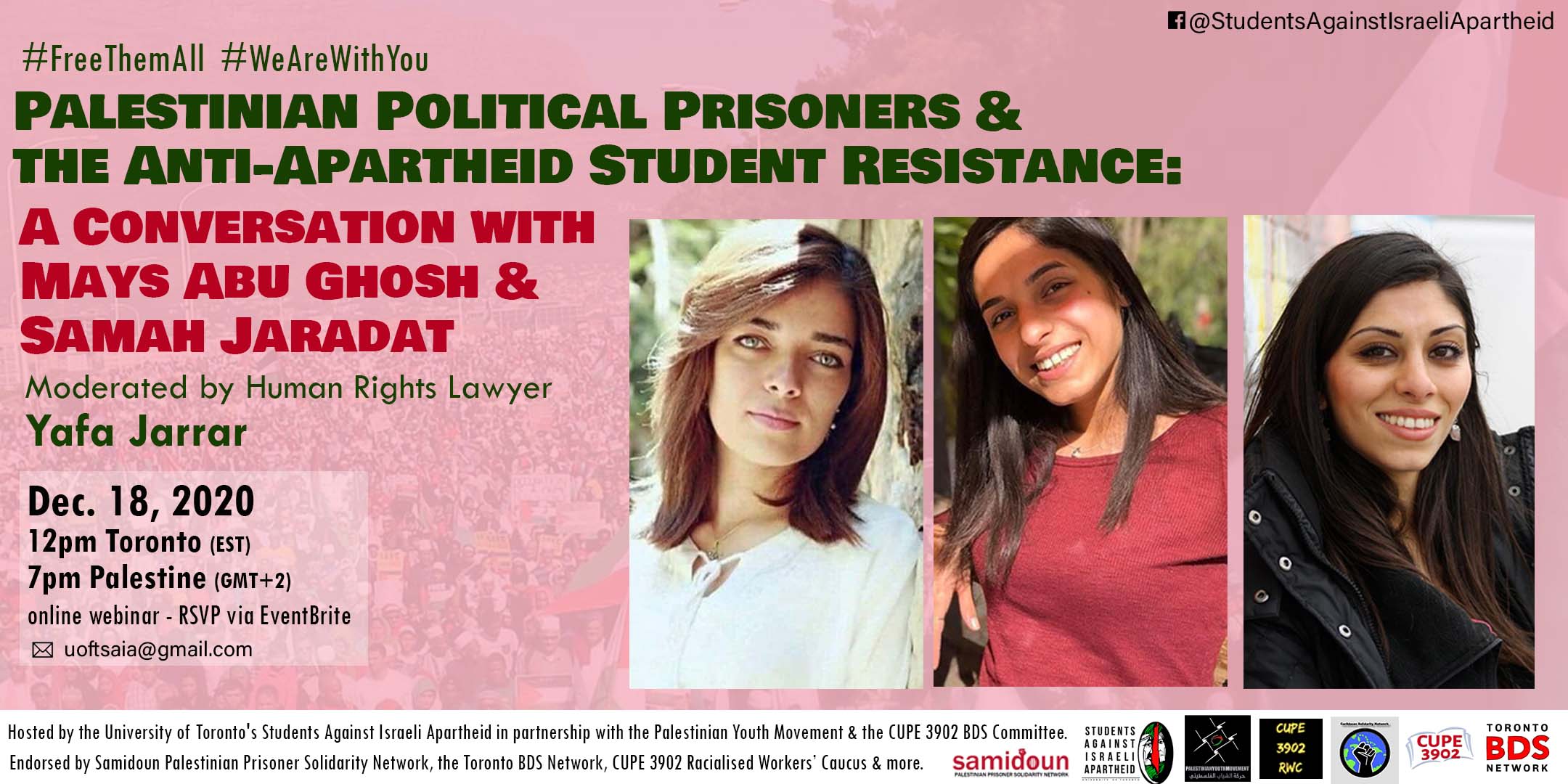 The University of Toronto’s Students Against Israeli Apartheid in partnership with the Palestinian Youth Movement and the CUPE 3902 BDS Committee is honoured to host Palestinian student activists and former political prisoners, Mays Abu Gosh and Samah Jaradat of Birzeit University in a conversation moderated by labour and human rights lawyer, Yafa Jarrar. Mays Abu Ghosh and Samah Jaradat are two of the many Palestinian students who are being targeted in a recent upsurge of arrests and imprisonment of campus anti-apartheid activists by the Israeli occupation forces.

Hear from Palestinian activists on their sumoud (steadfastness) in the face of Israel’s colonial prisons and the role of the student movement in resisting Israeli apartheid. #FreeThemAll #WeAreWithYou
Endorsed by Samidoun Palestinian Prisoner Solidarity Network, the CUPE 3902 Racialised Workers’ Caucus, the Toronto BDS Network and the Caribbean Solidarity Network.

To add your name to the list of endorsers, please email uoftsaia@gmail.com.

Mays Abu Ghosh is a 22-year-old Birzeit University student activist and journalist living in the Qalandiya refugee camp, Palestine. Mays was seized by Israeli occupation forces in a violent raid on August 29, 2019, when armed soldiers removed the door of her family home and invaded it, ransacking her and her family’s belongings, blindfolding and cuffing her and then taking her to an occupation military camp near Qalandiya checkpoint. With many across the world denouncing her imprisonment, including Angela Davis, Mays was released on November 30, 2020 after 15 months of torturous imprisonment.

Samah Jaradat is a recent graduate of Birzeit University and activist living in Palestine. Samah was arrested only days after her graduation and was then subjected to 22 days of harsh interrogation at the Moskobiyeh detention center in occupied Jerusalem after she was seized by Israeli occupation forces who invaded her family’s home in Al-Bireh on September 7, 2019.

Yafa Jarrar is a Palestinian labour and human rights lawyer living in Ottawa. Yafa was born in Jerusalem and raised in Ramallah, Palestine. She moved to Canada in 2003 to attend Lester B. Pearson College of the Pacific. Yafa has been involved with the Boycott, Divestment, and Sanctions (BDS) movement in Palestine and internationally since the BDS call in 2005. Both of Yafa’s parents have been political prisoners in Israeli prisons. Yafa’s mother and human rights defender, Khalida Jarrar, is currently a political prisoner in Damon Israeli prison.

Students Against Israeli Apartheid – U of T