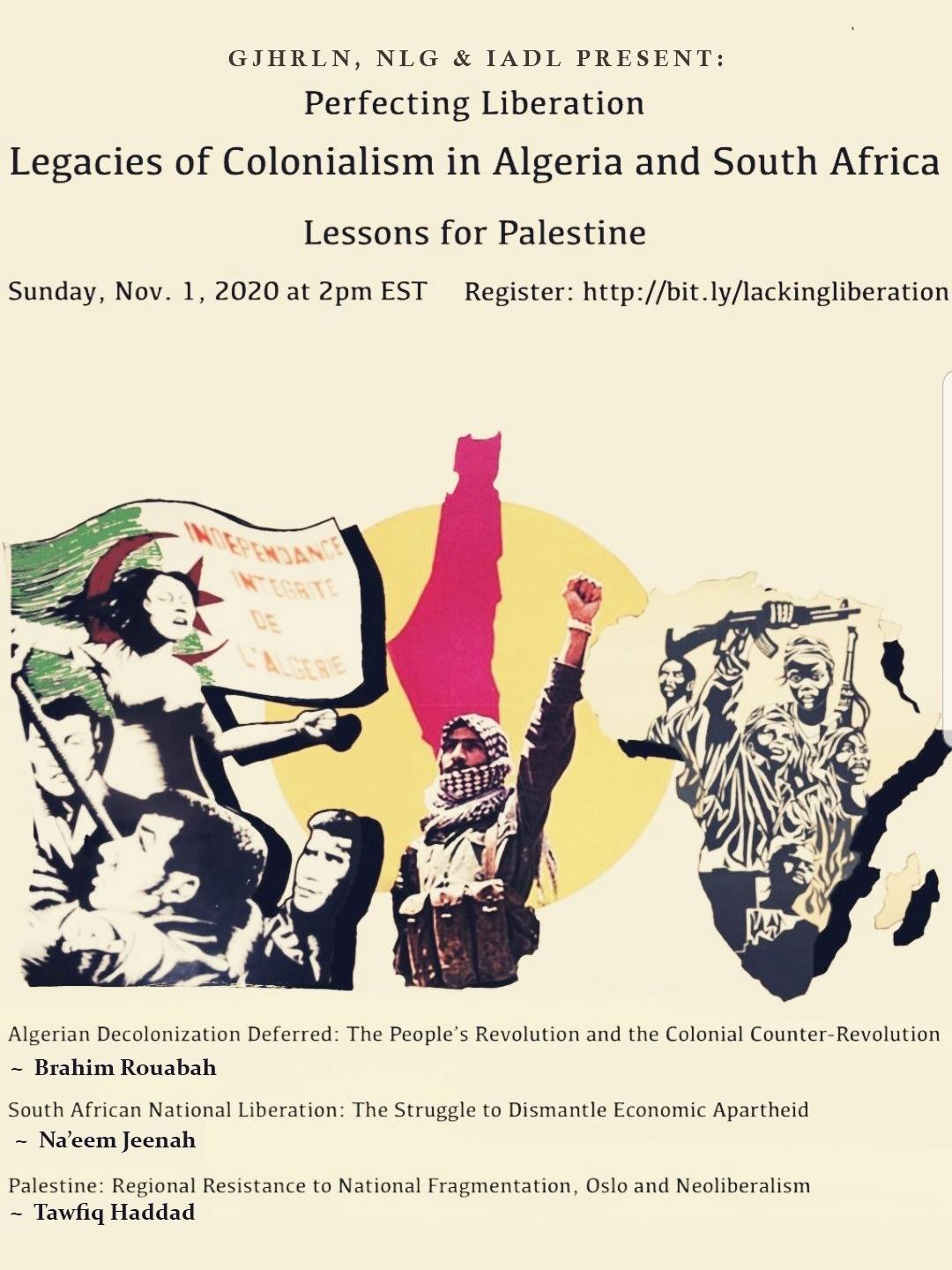 On the 66th anniversary of the start of the Algerian Revolution, the103rd anniversary of the Balfour Declaration, and as South Africa is labeled host to the world’s greatest wealth gap, we reflect on the successes and challenges of the Algerian and South African Liberation struggles, and the role of counter-revolutionary, neoliberal and comprador classes in extending the legacies of colonialism.

From this framework we will assess the Oslo Accords’ role in extending western (neo-) colonialism and Palestinians’ burgeoning struggle to reverse its disastrous consequences.
The webinar will engage the Panelists to Attendees to consider and map key steps and strategies for escalating collective liberation and decolonization in Palestine, Algeria and South Africa- and possibilities for more active solidarity.

Toufic Haddad is a Palestinian author, journalist, publisher, academic, UK-based teaching fellow and is currently based and working in Al Quds, Jerusalem, Palestine. Toufic authored Palestine Ltd.: Neoliberalism and Nationalism in the Occupied Territory- the most comprehensive analysis of the role of Oslo’s neoliberal frameworks have played in laying the political, social and economic fabric for an era of neo-colonialism and `disaster capitalism’ in Palestine. He is also the co-author of Between the Lines: Readings in Israel, the Palestinians and the U.S ‘War on Terror’ , and Towards a New Internationalism: Readings in Globalization, the Global Justice Movement and Palestinian Liberation. Toufic has also worked in various Palestinian based organization including Badil Center for Residency and Refugee Rights and the Alternative Information Center.

Na’eem Jeenah is a South African academic, author, community leader, activist and the executive director of the Afro-Middle East (research) Centre in Johannesburg, is part of the Advisory Council of the World Congress for Middle Eastern Studies, and a Board member of the Denis Hurley Peace Initiative (part of the Southern African Catholic Bishops’ Conference). Na’eem was heavily involved in the struggle against Apartheid, an remains active in challenging the role of capitalist groups in South Africa and with international anti-war movements. Na’eems publications include Pretending democracy: Israel, an ethnocratic state (as editor), and MENA uprisings and transformation and their impact on Africa. His most recent publication (as editor) is Political Islam: Conceptualising power between Islamic states and Muslim social movements.

Brahim Rouabah is an Algerian political activist, organizer and academic. He is the co-founder of the UK based Algeria Solidarity Campaign and US based AlgeriaRevolt collective. He is currently working on his PhD in Political Science at the City University of New York, Graduate Center and a teaching fellow in political science at Brooklyn College.

Hosted by The Global Justice and Human Rights Law Network, The International Association of Democratic Lawyers and The National Lawyers Guild.

Endorsed by: Al-Awda- The Palestine Right to Return Coalition, NY4Palestine, Within Our Lifetime, Samidoun, AMP-NJ.