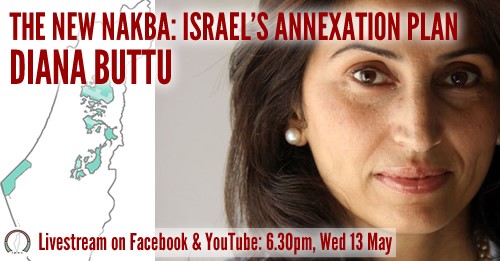 To mark Nakba Day 2020, on Wednesday 13h May the Ireland-Palestine Solidarity Campaign is honoured to host an online public meeting with Palestinian legal expert and political analyst Diana Buttu.

The talk will be livestreamed on the IPSC’s Facebook (https://www.facebook.com/IrelandPSC) and Youtube (http://www.youtube.com/IrelandPSC) channels at 6.30pm (Irish Time) on Wednesday 13th May, and there will be an opportunity for Q&A afterwards.

Ms. Buttu will discuss Israel’s latest plan to illegally annex large areas of the West Bank in the context on the ‘Ongoing Nakba’ which has seen the Palestinian subjected to seven decades of dispossession, ethnic cleansing, military occupation, mass incarceration, illegal annexation and racist apartheid.

72 years on from the violent colonial partition of Palestine in 1948 and the forcible expulsion of two thirds of its indigenous people, she will also discuss what Palestinians, internationals and the international community can do to prevent this new Nakba, and how we can effectively support the Palestinian people’s struggle for freedom, justice, equality and return.

Diana Buttu is a Ramallah-based lawyer, analyst and commentator, a former legal advisor to Palestine Liberation Organization, and Policy Advisor to the Palestinian thinktank Al-Shabaka.