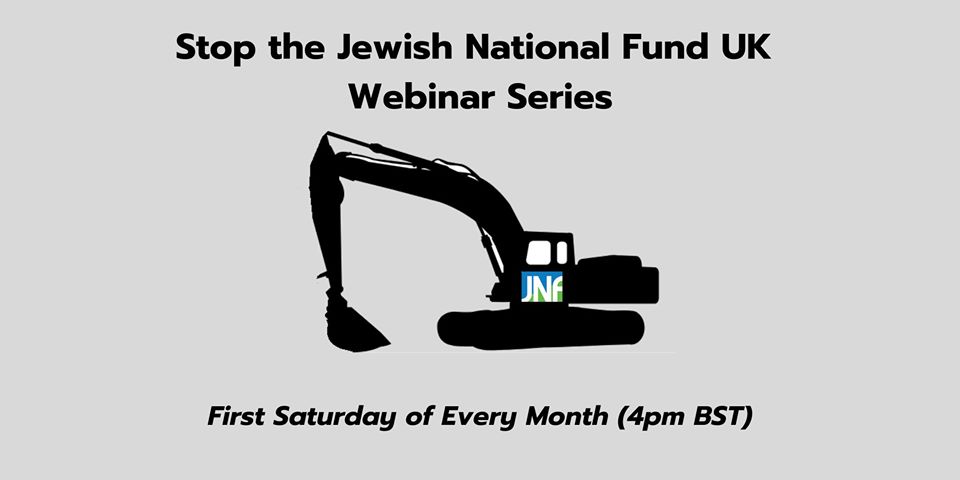 Join guest speakers and experts in a monthly webinar series to explore the role of the Jewish National Fund in the historic and ongoing ethnic cleansing of the Palestinian people. From the Nakba to today, the JNF has been a key agent in the colonization of Palestine. We will also explore how the JNF has helped to forge the racist ideology of the state of Israel, financing a discriminatory system whilst, at the same time, being accorded charitable status across the world. The campaign against the JNF likewise reaches across the world – we invite you to join us , wherever you are, in this campaign for justice.

Meetings (First Saturday of Month at 4pm BST)
Saturday 2nd May: What is the JNF (Jewish National Fund)?
The JNF functions as an arm of the Israeli state, yet presents as a charity in scores of countries. Our expert guests will discuss the JNF as a pioneer of the ethnic cleansing of Palestine and its ongoing activities to expel Palestinians from their homes. We’ll look at the JNF’s claims to act on behalf of Jews worldwide and show how this racist organisation can be challenged wherever you are.

Saturday 6th June: The JNF as a Pillar of Israeli Apartheid (1948-1967)
This webinar will reveal the part played by the JNF in this momentous period: the ethnic cleansing of Palestine, the seizure of Palestinian land, the erasure of evidence of this land theft and the prevention of Palestinians’ Right of Return. With eminent authorities, we will also explore the ways in which the JNF helped to forge the racist ideology and practices of the emerging state of Israel.

Saturday 4th July: The JNF as a Pillar of Israeli Apartheid (1967-present)
Once established as a parastatal organisation, the JNF has continued to facilitate Israel’s apartheid system. This webinar will focus on the Naqab, and the JNFs role in contemporary land confiscation.

Saturday 1st August: From Prawer to the JNF 2040 Plan
The JNF was involved in ethnic cleansing of the Negev through the Prawer Plan. Now, the JNF has an ambitious 2040 Plan to settle 1.5 million Israelis in the Galilee and Negev through the development of hi-tech industries. In the Negev, where destruction of Bedouin villages continues, the 2040 Plan involves collaboration with IDF Technology Units, including the notorious Unit 8200 which spies on Palestinians.

September 5th 2020: Nexus of Forces Allied with the JNF
To advance the Zionist movement’s conquest of land strategy, the JNF has relied on extensive fundraising among Jewish communities abroad, allowing the Israeli state to shift more of its resources to its military sector. In this session we examine the methods deployed by Western governments, the JNF and pro-Israel lobby groups to shield the Israeli state from criticism and actions coming from the BDS movement. We aim to explain how the JNF and its extensions in various countries pass off ethnic cleansing as charitable and explore ways to oppose them.

October 3rd 2020: Greenwashing and the JNF
Environmentalists beware. The JNF, which was established for the purposes of colonial dispossession, and has been executing ethnic cleansing for over 100 years, has re-branded itself as the “oldest green organization in the world” and is infiltrating the environmental movement. From biodiversity conservation to energy generation, from water conservation to climate change, the JNF has been causing environmental devastation and greenwashing crimes against the Palestinian people.