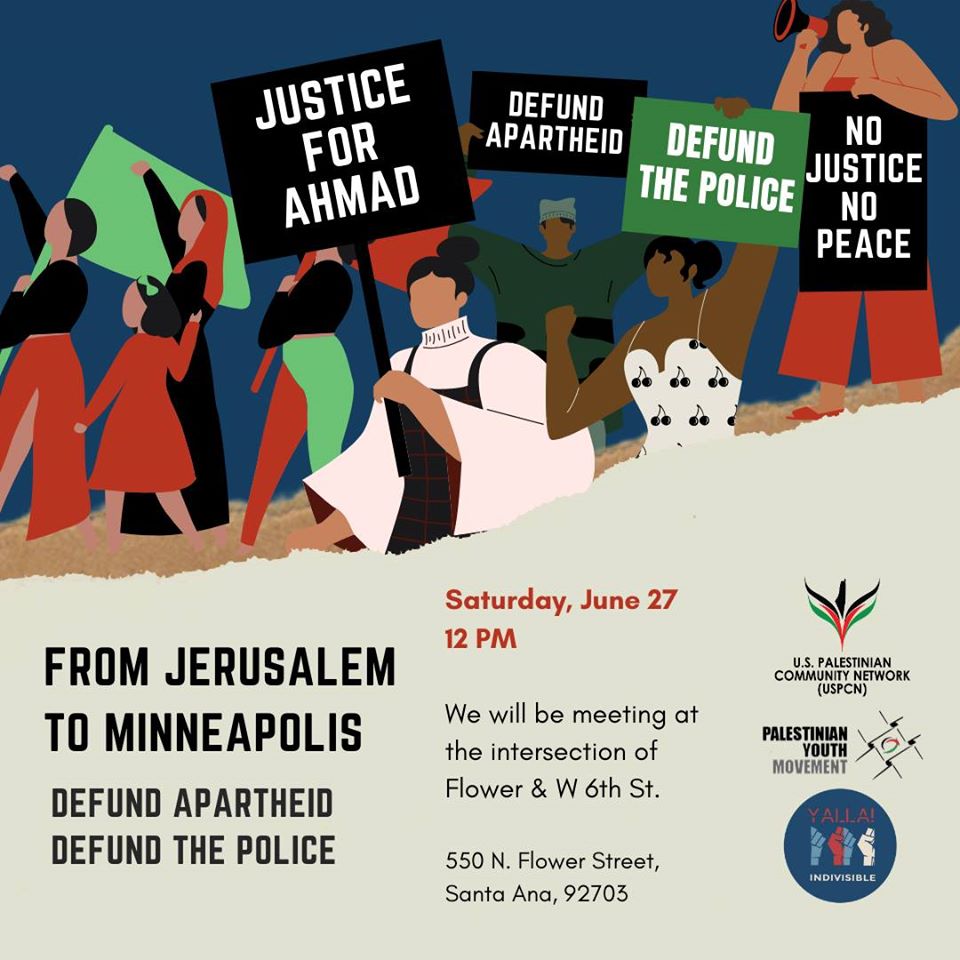 As we mark one month since the brutal killing of #GeorgeFloyd, we bear witness to another one, the killing of #AhmadErekat thousands of miles aways in Palestine. Those two senseless and brutal crimes were funded by our tax dollars.

Ahmad was shot at a “checkpoint” aka #DeathTrap on his way to pick up his sister (the bride to be) and mom from hair salon in Bethlehem. He was unarmed, shot several times and LEFT TO BLEED TO DEATH FOR ONE AND A HALF HOURS, while his father was pleading with Israeli Apartheid soldiers to let him help his dying son.

Unfortunately, we’ve heard and seen the same tragic disrespect of life over and over again, here and in Palestine.

Crimes against Black people in the US and Palestinians in the Occupied Territories are linked by the invisible thread of ADL-led , privately-funded training of high-ranking US police officials. This has become commonplace to the point where the US police use almost replicates that of their Israeli counterparts.

“Whether it is in Ferguson or L.A., we see a similar response all the time in the form of a disproportionate number of combat-ready police with military gear who are ready to use tear gas at short notice… Whenever you find 50 people at a demonstration, there is always a SWAT team in sight or right around the corner.” We saw that in Santa Ana on Tuesday at the Board of Supervisors meeting and at several other events.

With two of our cities, Santa Ana and Anaheim, ranked third and fourth (respectively) on the 2019 list of the 100 largest city police departments killing black men at higher rates than US murder rate, and reports that the Orange County Sheriff Department and the Garden Grove Police Department are 10.5 times as likely to use deadly force on a Black person compared to a White person, the time has come for us to say: No more!

And as we’re in the midst of a global pandemic and economic crisis, Congress is considering a bill (S.3176) to commit more money to fund the Israeli Apartheid to the tune of $3.8 BILLION, instead of extending healthcare coverage to uninsured and underinsured Americans, or providing financial relief to more than 40 MILLION unemployed Americans.

Enough is enough! It’s time for people to take back their power and #DefundThePolice and #DefundApartheid

This event is organized by Yalla Indivisible, US Palestinian Community Network (USPCN) and Palestinian Youth Movement (PYM), and is endorsed by BLM-LA, IE for Black Lives,Jewish Voice for Peace -LA (JVP-LA), Students for Justice in Palestine – UCI (SJP-UCI), Students for Justice in Palestine – UCR (SJP-UCR), and the Arab American Civic Council (AACC).

This is a safe event. Wear your mask and practice social distancing.