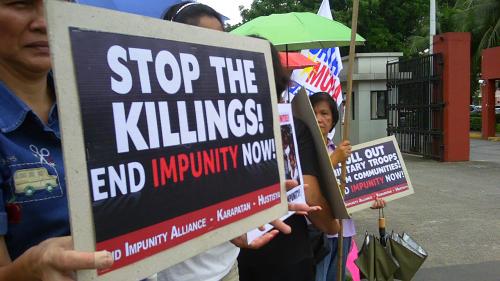 Stop the Criminalization of Resistance!

Stop Criminalizing People Who Struggle for their Rights to Land, Income, Shelter, Dignity, and a Just Peace!

Join the Alliance for People’s Health and the International League of Peoples Struggles on Coast Salish Territory on Monday December 10 to share messages of solidarity with people in struggle, and hear first hand reports from peoples struggles for justice and liberation across Turtle Island, Philippines, India, Palestine, Nicaragua, and more. Stand for Human Rights with Justice!

In the Philippines, since July 2016, hundreds of peasant leaders, health workers, journalists, lawyers, and human rights advocates have been killed under President Rodrigo Duterte’s counterinsurgency program Oplan Kapayapaan. Despite promises of fundamental change, the militarization of poor peasant communities and extra-judicial killings of leaders and activists in mass organizations intensifies. . Additionally, the death toll in Duterte’s drug war continues to climb. The war on drugs targets majority urban poor who live under conditions of extreme exploitation.

The situation in the Philippines is not unique. As the plunder of resources and the exploitation of working people intensifies, peasants, Indigenous peoples, and workers, including journalists and health workers, continue to struggle for their rights! From the Philippines and Palestine to Turtle Island and Latin America, the people continue to rise for a just and lasting peace that includes genuine land reform, the right of return to occupied territories, an adequate livelihood, and an end to environmentally destructive industries that plunder the land to enrich an elite minority. Those who raise their voices in the struggle for their communities’ fundamental human rights continue to face grave repression and even the loss of life by pro-imperialist states and military and paramilitary forces.

2. Make a cash donation to the Kagawasan! Liberation Campaign for Justice and Human Rights on Negros Island, Philippines. Message: kagawasanliberation@gmail.com

3. Join local the Alliance for People’s Health and other ILPS member-organizations and participate in the anti-imperialist struggle to defend and expand human rights and stand in solidarity with human rights defenders.

Why December 10th? December 10th is recognized across the world as a day to commemorate the adoption of the Universal Declaration of Human Rights by the United Nations in 1848. The basic tenants of this international statute establish an individuals economic, social, and cultural rights, including the “the right to a standard of living adequate for the health and well-being of himself and of his family, including food, clothing, housing and medical care and necessary social services.” Forty-eight countries are original signatories to the declaration, including Canada, the United States, India, the Philippines, and Mexico, committing themselves to securing fundamental human rights for their citizens.