Home Articles Vision of a Palestinian Child: Houses of Steel that Cannot be Demolished

Anyone who raised children knows their tenacity in getting what they want, especially to avoid going to sleep on time. My children will ask to use the toilet for the fifth time, have a sudden thirst that has to be quenched right there and then, ask to re-read a story they’ve heard many times before, and/or complain about their pajamas that are uncomfortable in order to achieve their goal. They will even decide to tell me all about their day at school from A-Z at bedtime, although they have been asked about it earlier, but were not in the mood to talk. And if it all fails, they are ready to invent new issues all in the pursuit of delaying sleep. Like many parents, this is what I have to deal with almost nightly with my three children.

Parents on the other hand, although they know all the ins and outs of their children’s intentions and fabrications of needs, often cave in, as I do, to their children’s demands, especially on some requests, such as the reading of one more story. By doing that, we, parents, are avoiding any harmful consequences that the children may think of, like a temper tantrum, and we know that extra reading has never been a negative action. In the meantime, however, the children feel that they are victorious and have learned that being persuasive works at times.

One night recently, my three children: Khaled, Ghassan and Basel insisted on me re-reading them the story of the “The Three Little Pigs”.  All right, I say to myself, it is short…I am saved!

So I started: “Once upon a time, there were three little pigs. Each of them decided to build his own house, where one built it from straw, the second one built it from wood and the third one built a house from bricks. When the big bad wolf came, he was able destroy the first two houses but not the house made of bricks… the third pig won!” And so did I. All done, so I thought. All right, good night kids!

The story ended in peace, and I was looking forward to having a cup of Nescafé that I had been dying for all afternoon. However, Khaled, 5 years of age, surprised me before I turned off the lights by asking: “Mom, would you tell us, what do we learn from this story?

Me: without a second thought I said the obvious: “We learn that hard work and dedication always pay off. If we take our time and build a house with a concrete foundation and solid material, no one ever can destroy it; like what happened to the first two pigs’ houses.” Little did I know that Khaled was thinking beyond the story of the Three Little Pigs and their houses.

Khaled: “Mom, this story doesn’t make sense. Take the house of ‘Uncle Walid’ for example. It’s made of stone yet Israel demolished it.”

I was dumbfounded by his observation and ability to analyze and express his thoughts. “Uncle Walid’s house was built from stone,” he said. His response was loaded and needed a different answer from me. After all, strongly built stone houses can be taken over and destroyed by the “wolf.” Khaled was able to see my perplexity as well as my rushing emotions as tears rolled down my cheeks.

“Mom,” Khaled continued, “I have an idea. If we build our house from iron or steel the Israelis will not be able to demolish it ever, right?”

How aware is my 5-year-old of the Israeli occupation and its brutal practices? What impacts do these practices leave on children’s minds? How aware do I want him to be and at what stage in his life?

These and other questions rushed to my mind all at once. But for now, I told myself that I need to provide my son with an answer that might contribute to his empowerment. There was no need to try to burden him with the brutality of any occupation much less the one he is living under. Therefore, I decided to support his creativity and with a “broken” promise, said that we shall try to build steel houses one day. “Please try to sleep,” I said.

By now, my mind is racing. Khaled’s awareness of Israel’s demolition of “stone” houses brought out my fear for the safety and future of my children and of all Palestinian children.  House demolition is a cruel act that harms not only the individual people and families targeted by Israel, but the entire community as well, first and foremost our children.

Two such cases are the home demolitions and forcible displacement of all members of the families of Yazan Mughammes and Walid Hanatsheh, two Palestinian political prisoners recently arrested by the Israeli authorities and are accused of carrying out attacks on Israeli targets near the illegal Israeli settler colony of ‘Dolev’ inside the occupied West Bank of Palestine. The order to demolish both houses was issued by the Israeli High Court of Justice and was valid as of March 1st, 2020. The home demolitions were carried out on the 5th of March. This is one of many forms of collective punishment practiced by the Israeli regime against Palestinians who themselves have not been accused, let alone convicted, of any offence.

A family house is not just a piece of property. It is as sacred as the family, and its history is retold from one generation to another. Its loss leaves an emptiness in the hearts and minds of those who inhabited it.  In a warm meeting that happened last month between Walid’s wife and Yazan’s mother, one asked the other: “What is the current status of your house?” The other replied back smiling: “Exactly like yours!”

It was a heavy, painful, sad moment and an ironic joke. Yazan’s mother recounts: “The house belongs to my family from my father’s side. We lived in it for 20 years and now we are forced to leave. Memories of living in this house will forever be engraved in our hearts and minds. We will go on recalling these memories and relaying them to the next generation,” Sana’a said. 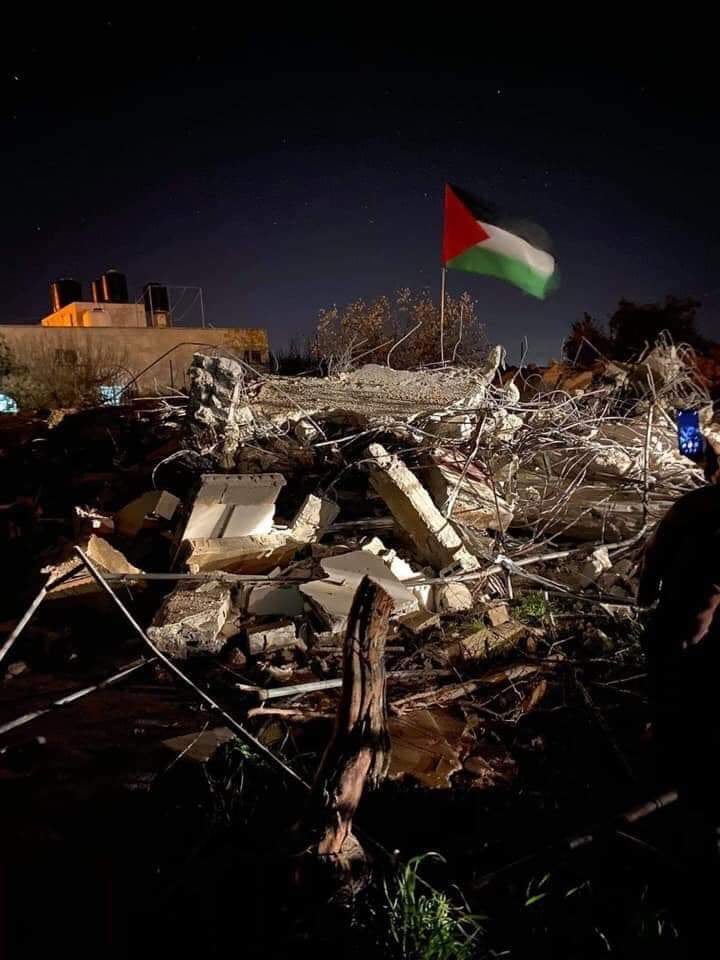 Yazan Mughammes’ house after the demolition. Photo via Facebook“It is not unusual to lose material objects in life, but losing something like a home that you have lived in your entire life is losing the place where all your memories, laughs, tears, ups and downs were formulated,” said Malak, Walid’s 12-year-old daughter.

How do children deal with such loss? This beloved place in which Malak lived is being demolished simply because of an arbitrary and inhumane military decision, justified by illogical and colonial pretexts that only serve Israel’s ongoing desire for bitter revenge and, more, for the  emptying of Palestine of its indigenous people. The military forces usually come like thieves at night to accomplish their mission. Unfortunately, very little is done in support of the victims. The ineffectual local media will act angrily for no more than a couple of days, while the international media will remain silent.

Under the principles of customary international law and international jurisprudence, third states are responsible for preventing ongoing violations of humanitarian law by investigating, prosecuting, withholding aid or recognition, and cooperating to end the grave breach, including through retaliatory measures against the violating states. Despite this, the international community’s opposition to Israel’s use of collective punishment has rarely risen above the level of verbal condemnation. It is up to Palestinians and the Palestinian solidarity movement to pressure the international community and Israel to discontinue these violations.

In light of the above, it is thus imperative to assist victims in submitting their cases of collective punishment, particularly home demolitions, to the Office of the Prosecutor of the ICC for consideration as a violation under the Rome Statute, and the Special Rapporteur on Adequate Housing for special investigation, as well as other international bodies that are dedicated to facilitating the participation of victims. Finally, we must continue working towards the isolation of the Israeli regime, and advancement of the boycott, divestment and sanctions movement (BDS) as a cornerstone activist strategy geared towards placing economic and political pressure on the occupying power.

Hind Shraydeh is a writer and human rights defender from occupied Jerusalem, Palestine. She is the wife of Ubai Aboudi, the imprisoned Executive Director of the Bisan Center and a Palestinian writer and researcher. To support Ubai’s campaign for freedom, please visit Scientists for Palestine and sign the petition: https://actionnetwork.org/petitions/end-the-detention-of-ubai-aboudi

Thanks to Jamileh Abed for her English-language editing of this piece!

Samidoun Palestinian Prisoner Solidarity Network recognizes the urgent need to build the strongest possible front to confront Israeli house demolitions, torture and other forms of abuse internationally through popular struggle, including escalating the boycott, divestment and sanctions (BDS) campaign. We must not allow the Israeli occupation to isolate Palestinian prisoners in solitary confinement or through our silence. The impunity of the Israeli state – backed up by U.S., European, Canadian and other imperialist powers’ support – may not be allowed to continue. We urge all to take action. Please follow the Facebook page: Stop Collective Punishment for actions and news.