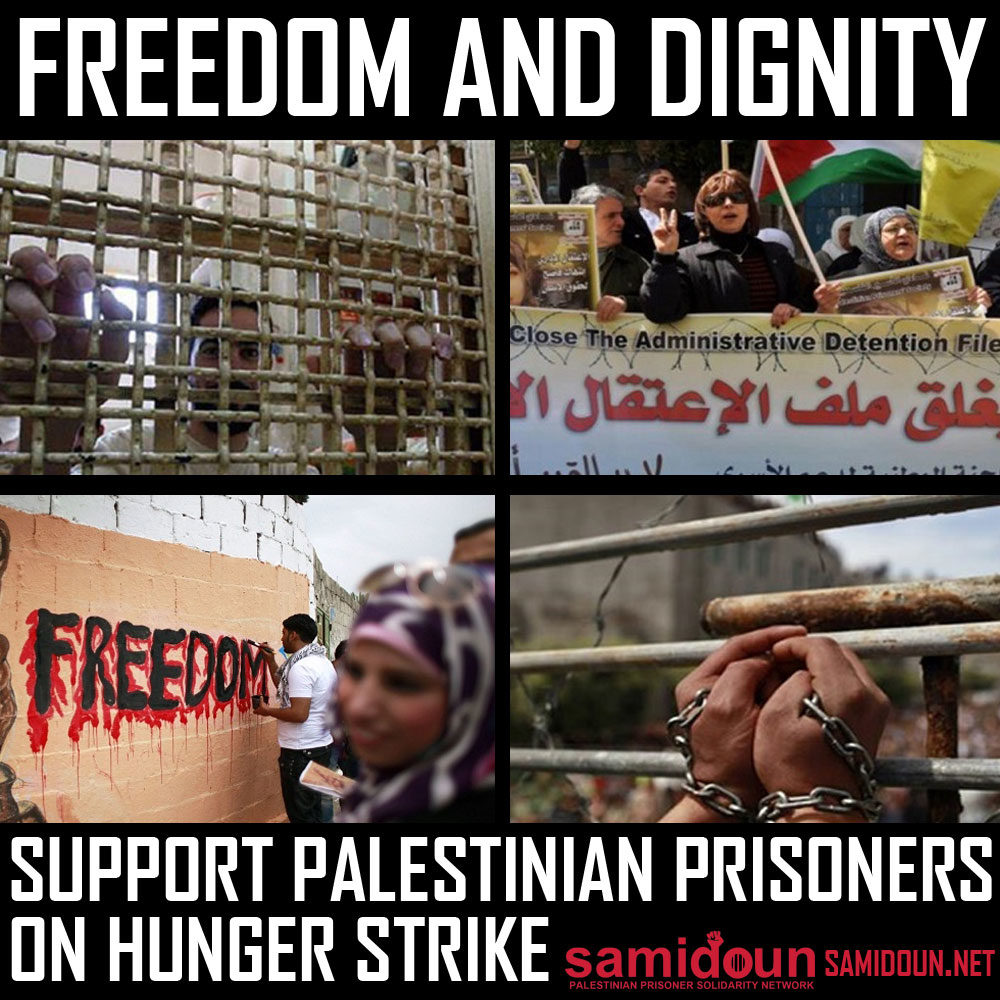 The prisoners’ strike is expected to escalate in the coming days, with hundreds more joining the strike tomorrow, 9 April, and even more joining on 17 April, Palestinian Prisoners’ Day. Among the initial strikers are:

In addition, the Popular Front for the Liberation of Palestine’s prison branch issued a statement urging the broadest support for the strike and listing a number of PFLP prisoners who were among the initiators of the strike: “Kamil Abu Hanish, Hekmat Abdel-Jalil, Hisham Kaabi, Nidal Daghlis, Marcel Shtayyeh from Nablus, Khaled Halabi from Jerusalem, Mahmoud Abu Saba from Ramallah, Samer al-Qaisi from Dheisheh camp in Bethlehem. These are from the same group that were attacked and suppressed in Section 1 of Ramon prison a few days ago amid the burning of the section. In addition, the leader of the PFLP prison branch, Wael Jaghoub, announced that he will begin the battle of dignity early, two days ago.”

The statement noted that the PFLP prisoners are “mobilizing in all ranks of leaders and members” and said that the “prisoners of the four forces (Hamas, the two Fronts and Islamic Jihad) have decided to engage in this battle a gradual manner, beginning with the entry of hundreds of prisoners in the strike, and affirm that this battle will not stop until the prisoners obtain their demands.” It called for the broadest collective support for the prisoners’ struggle inside and outside Palestine, “emphasizing our unity in this decision to engage in the Battle of Dignity.”

Samidoun Palestinian Prisoner Solidarity Network expresses its strongest support for the Palestinian prisoners’ movement as it launches this critical battle for dignity and justice. We urge people around the world to take action to support the prisoners’ strike and join their struggle. The Palestinian prisoners will not be isolated or left alone! International solidarity is critical to building support, attention and pressure to help them achieve their demands.

1) Organize or join an event or protest for the Palestinian prisoners. From today, organize demonstrations, actions and events and join in the Prisoners’ Week of Action from 17 to 24 April 2019! You can organize an info table, rally, solidarity hunger strike, protest or action to support the prisoners. If you are already holding an event about Palestine or social justice, include solidarity with the prisoners as part of your action. Send your events and reports to samidoun@samidoun.net.

2) Write letters and make phone calls to protest the violation of Palestinian prisoners’ rights. Demand your government take action to stop supporting Israeli occupation or to pressure the Israeli state to end the policies of repression of Palestinian political prisoners.

3) Boycott, Divest and Sanction. Join the BDS campaign to highlight the complicity of corporations like Hewlett-Packard and the continuing involvement of G4S in Israeli policing and prisons. Build a campaign to boycott Israeli goods, impose a military embargo on Israel, or organize around the academic and cultural boycott of Israel.