Palestinian former prisoner and student, Jaafar Awad, 22, died Friday, April 10 of severe illness, approximately two months after his release from Israeli prison. His cousin, Ziad Awad, 28, was then killed – shot by Israeli soldiers as he protested Jaafar’s death. Samidoun Palestinian Prisoner Solidarity Network notes that Awad’s case is one of the most striking and tragic examples – unfortunately, among many such examples – of the medical neglect and mistreatment of Palestinian political prisoners. Take action to demand justice for Jaafar and Ziad and freedom for sick Palestinian prisoners in Israeli jails.

Jaafar Awad, born on November 8, 1992, was arrested on November 1, 2013 and served 18 months in Eshel prison; previously he had been arrested for 3 years. Each time, he was accused of membership in Islamic Jihad. Awad, an engineering student, fell strikingly ill in Eshel prison. He was not ill prior to his arrest. Suffering from diabetes, Awad was administered incorrect insulin shots in Eshel prison, which his father called the “needle of slow death.” 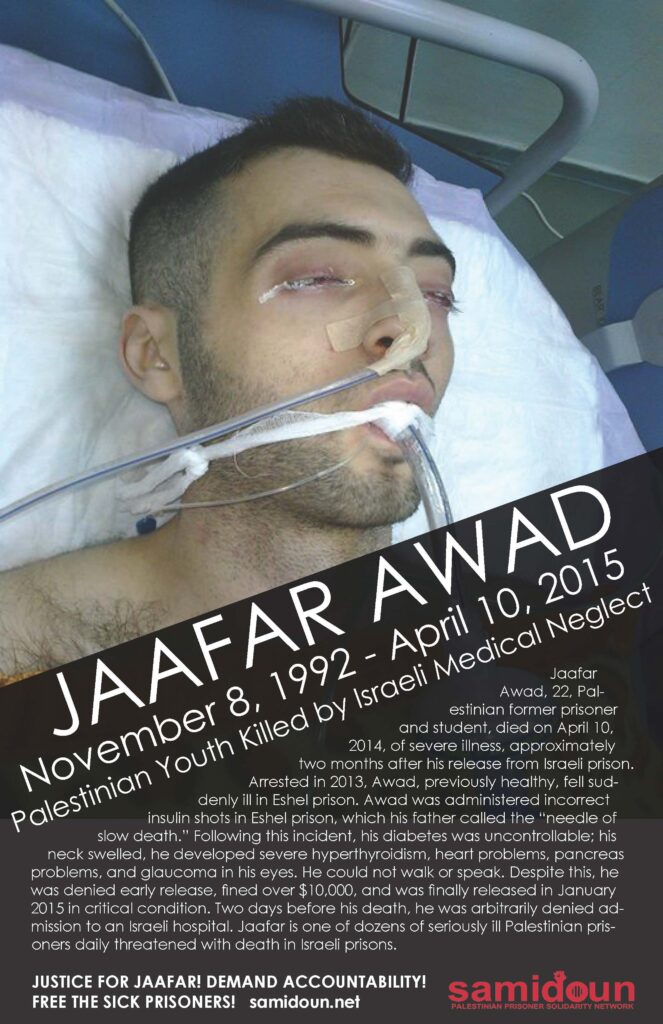 Following this incident, his diabetes was uncontrollable; his neck swelled, he developed severe hyperthyroidism, heart problems, pancreas problems, and glaucoma in his eyes. He could not walk or speak. Despite this, he remained imprisoned for months, receiving little or inadequate health care until he was finally released on January 21, 2015 in critical condition and with a suspended sentence and a high fine of 40,000 NIS ($10,200).  He had not been tried since November 2013, despite his lengthy imprisonment. This release came after he had earlier been denied release on December 30, 2014, when he was already in a severe health crisis. He had been rushed to the hospital on December 22, shackled hand and foot, in a severe medical crisis and with acute pneumonia.

Palestinian hospitals did not have the capacity to treat his illness; his family and the PLO Commission on Detainees’ and Ex-Detainees’ Affairs were seeking treatment for him in Germany, but were struggling with costs and with the refusal of occupation authorities to allow his international travel. On Wednesday, as his situation became more dire, his family sought his admission at the Israeli Hadassah hospital, which was denied, and he was returned to Hebron’s Al-Mizan hospital, where he died early on Friday morning, April 10.

The release of very ill Palestinian prisoners only after their illness is extremely critical has been previously remarked upon by Palestinian sources. “Over the last three years Israel has released a number of sick prisoners, some who died a few months later. They include Ashraf Abu Thrai, Zuhair Labbada, Hassan al-Turabi, Mohammad al-Amla and Sultan al-Wali, according to CDEDA. The commission also confirms none of them were ill before their arrest, but they became sick during their imprisonment.” Labbada was arrested, ill, on December 7, 2011, released in May 2012 in a coma, and died a week later. Other severely ill Palestinian prisoners have died in prison after lengthy neglect of their illness – for example, Maysara Abu Hamdiyyeh, who died in 2012 of cancer after being denied cancer treatment for years.

Palestinian prisoners – particularly those who are very ill – have repeatedly reported mistreatment and medical neglect in Israeli prisons, including denial of medical tests, denial of access to outside physicians, denial of access to appropriate medications including chemotherapy, denial of specialists, delay of treatment for months or years, errors or accidental mistreatments, denial of appropriate mobility support, and the provision of pain killers or flu shots rather than treatment for illness. There are approximately 1200 ill prisoners, with 80 of those seriously ill and approximately 20 facing very severe health crises, including Yusri al-Masri, Mansour Muwqada, Khalid Shawish, Nahed al-Aqraa, Muatasem Raddad, Muhammad Barash, Alaa al-Hams, Riyad al-Umur, Salah al-Titi, Khader Dabaya, and Fawwas Baara.

Just last Saturday, April 4, the power was cut for more than 12 hours to Ramle Prison Clinic, where the most severely ill Palestinian prisoners are held, including prisoners with cancer and liver failure who require constant medical monitoring. Palestinian lawyer Hanan al-Khatib described the action as a “punitive measure” that was “immoral and inhumane.”

Samidoun Palestinian Prisoner Solidarity Network joins in the numerous calls from Palestinian organizations for an independent international investigation into the death of Awad and the medical situation for Palestinian prisoners in Israeli jails. The Israeli occupation is fully responsible for the death of Jaafar Awad, given improper treatment, denied release, denied access to hospital after release, slapped with an exorbitant fine – or ransom – to release him as he lay in critical condition, and for the death of his cousin Ziad Awad, shot down in cold blood as he demanded justice for Jaafar. Awad’s father has called for the file on the death of Jaafar to be delivered to the International Criminal Court.

The killing of Jaafar Awad is part and parcel of the systematic mistreatment, neglect and health abuse to which Palestinian prisoners are subject at the hands of the Israeli prison system. It is one more facet of the racism and settler colonialism of the Israeli state, aimed at erasing Palestinian existence. The murder of Ziad Awad as he marched for justice for his cousin reflects that same systematic, militarized racism carried out against Palestinians inside and outside the prisons.

It is critical to demand independent investigation and accountability for the killing of Jaafar Awad and an end to the mistreatment and abuse of sick Palestinian prisoners, and to demand freedom for the sick prisoners.

2. Inform your community: write about and share the story of Jaafar Awad. Contact your local parliamentarians and inform them about the realities of medical neglect and mistreatment for Palestinian prisoners; call for independent investigation of Jaafar’s death.

3. Protest at the Israeli consulate or embassy in your area. Bring posters and flyers about Jaafar’s death and mistreatment of prisoners: hold a protest, or join a protest with this important information. Hold a community event or discussion, or include Khalida’s case in your next event about Palestine and social justice.

4. Boycott, Divest and Sanction. Hold Israel accountable for its violations of international law. Don’t buy Israeli goods, and campaign to end investments in corporations that profit from the occupation. Learn more at bdsmovement.net.

I write today to call for the immediate release and the provision of proper medical treatment to the hundreds of sick Palestinian political prisoners being held in Israeli jails. On April 10, Jaafar Awad, a 22-year-old Palestinian youth, died two months after his release from Israeli prison, where he was mistreated and medically neglected, given incorrect and dangerous injections and wound up unable to move or speak, with severe diabetes, glaucoma, and thyroid, pancreas and heart disease.

The death of Jaafar Awad, mistreated by the Israeli prison system, denied early release for a month, and then – two days before his death – denied access to treatment at Israeli hospitals, is the responsibility of the Israel Prison Service. His death, and the ongoing mistreatment, medical neglect and abuse of Palestinian prisoners is an international issue of great concern to me and many others around the world.

Jaafar Awad’s death follows on the deaths of Hassan al-Turabi and Maysara Abuhamdieh. Prisoners are suffering daily in the Ramle prison clinic and receiving only painkillers, denied surgery and treatment for very serious illness. On Saturday, April 4, the power was switched off for 12 hours.

Some prisoners whose cases require immediate action include: Mansour Mowqada, who has cancerous tumors, a “plastic stomach” and uses colostomy bags; Nahed al-Aqra, who has had four parts of his leg amputated; Moatassem Raddad, who suffers from cancer; Yousry al-Masri, who has thyroid cancer; Murad Abu Muliq, who has lost nearly 20 pounds due to intestinal disease; and the others held at Ramle prison clinic.

I write today to demand the immediate release of the sick prisoners. Until their release, these immediate actions are needed:

Immediate independent examination by Palestinian doctors, and outside doctors being allowed into the prisons to examine them

This is a matter of urgent concern.