The following report was issued by the Palestinian Prisoners’ Society, Addameer and Prisoners’ Affairs Committee, on arrests and detentions of Palestinians in February 2016. Translated from Arabic. Click here for the Arabic original. 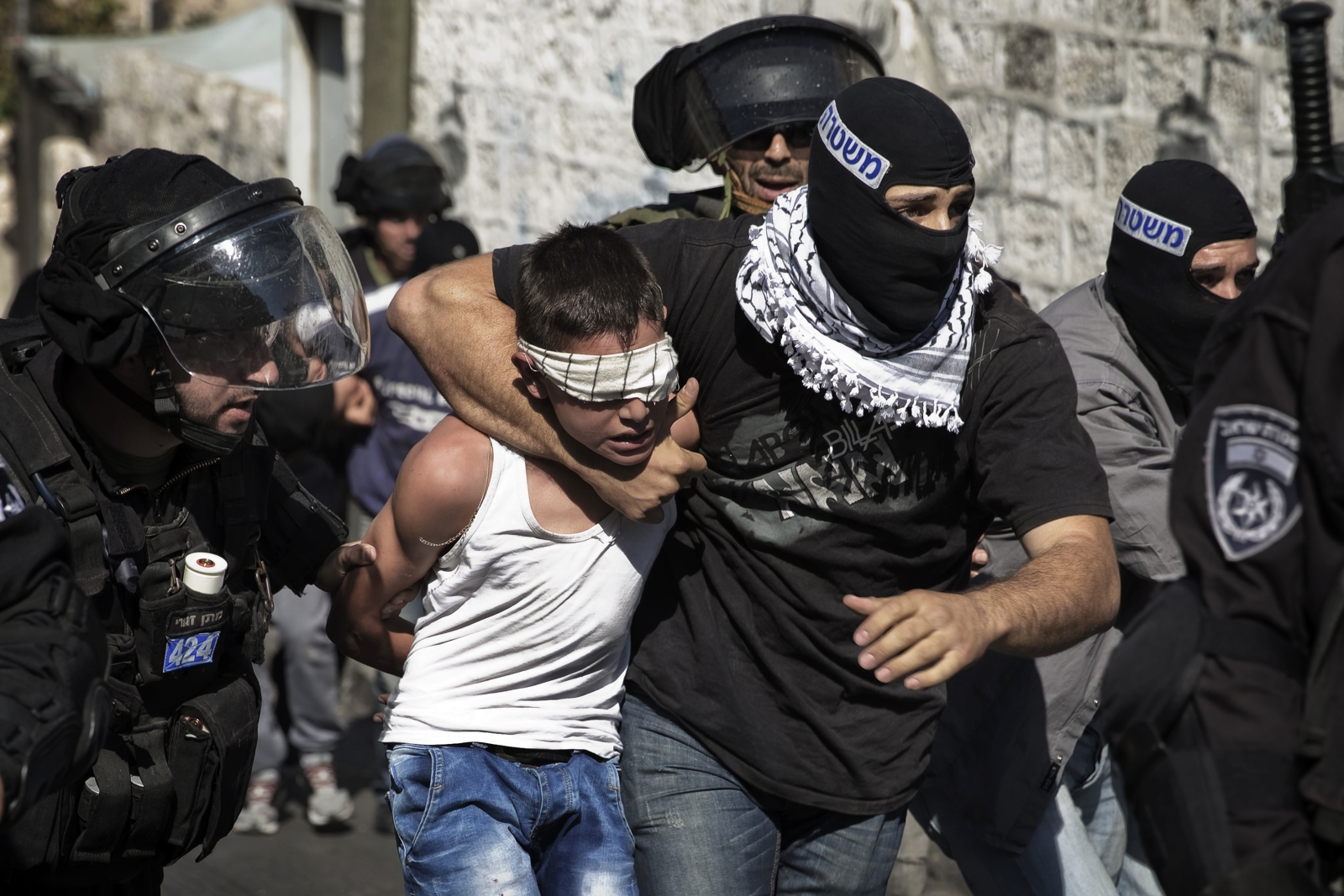 In a joint report, three Palestinian institutions: the Palestinian Prisoners’ Society, Addameer Prisoner Support and Human Rights Association, and the Prisoners’ Affairs Committee – said that the Israeli occupation authorities arrested 616 Palestinians from the West Bank and Gaza in February 2016. This number includes 140 children and 18 women and girls. The number of arrests since the beginning of the popular uprising in October 2015 has exceeded 4,120.

The report further stated that the highest percentage of arrests took place in Jerusalem governorate, of 158 Palestinians, followed by 125 arrested in al-Khalil, 70 in Nablus, 68 in Ramallah and al-Bireh, 65 in Jenin, 58 in Bethlehem, 31 in Tulkarem. 22 Palestinians from the Gaza Strip were arrested, 13 from Jericho, 11 from Salfit, 10 from Qalqilya and five from Tubas.

A number of prisoners carried out hunger strikes in February for various reasons; some continued hunger strikes begun in past months, mot notably the imprisoned journalist Mohammed al-Qeeq, 33, from al-Khalil, who waged a 94-day hunger strike in protest of his administrative detention, and ended with an agreement to release him on 21 May, provide medical treatment at a hospital inside 1948 occupied Palestine and allow family visits during that time.

Akram Zahra, a Jordanian prisoner, waged a 12-day hunger strike demanding his release and transfer to Jordan after he remained imprisoned by occupation authorities following the expiration of his sentence; he was released to Jordan.

A number of prisoners carried out individual strikes in solidarity with Mohammed al-Qeeq for several days before he ended his strike.

Each year, Israeli occupation courts in Jerusalem issue dozens of orders for house arrest of Jerusalemite children for various long periods, which prevent a child from leaving their home except in emergency circumstances such as going to the hospital, accompanied by a guardian, which deprives the child from playing and interacting with their surroundings in full, creating deleterious psychological effects, and transforming parents into jailers for their children. Over 60 house-arrest decisions were issued against Jerusalemite minors in 2015.

In a particularly dangerous precedent not only for children but for Palestinian women, an order of house arrest was made against the child Milad Musa Salah-al-Din, 16, of Hizma in Jerusalem, on the condition that his mother be imprisoned with him for two months. Both are threatened with a 20,000 NIS fine if either of them leaves the home. This comes after he was imprisoned for 25 days, accused of throwing stones, and his family paid a fine of 10,000 NIS. His mother is prohibited from teaching at her job as a school teacher.
Solitary confinement

16 prisoners are held in solitary confinement under the pretext of “security reasons,” the longest-held being Abdul Rahman Osman, who has been in isolation since 10 March 2013, a year after the end of the Karameh hunger strike in 2012. Isolated prisoners are held in Megiddo, Ashkelon, Eshel, Nafha, Ramon, Ayalon, and Nitzan prisons, in dedicated isolation sections in cruel and inhumane conditions. Isolation and solitary confinement is a form of psychological torture, which is prohibited by Article 1 of the Convention Against Torture, which forbids inhuman and degrading treatment and the infliction of mental suffering. The Israel Prison Service uses its policy of isolation as a punitive measure against prisoners, and especially leaders, in order to undermine stability and deprive them of their right to communicate with the outside world and receive family visits.

One isolated Palestinian prisoner is Shukri al-Khawaja, who was harshly interrogated for 50 days in the “Russian compound” interrogation center. After interrogation he was transferred to Ofer prison and on 17 December 2014 he was ordered into solitary confinement “for security reasons” for a one-month renewable order. He was moved to the isolation cells of Ayalon prison. In June 2015, he was isolated for six months ending in December 2015, which was then renewed for another six months.

On the isolation conditions in Ayalon prison, Khawaja says that the room is a 3 x 3 meter space, contains a toilet and a bath, the mattress is 2 cm thick. There is a small refrigerator, a burner for coffee and a cooker, two small clothes racks and a television. He is allowed out of the room for two hours each day into a 3 by 6 meter yard area. Khawaja adds, “The most difficult thing about isolation is being alone and thinking about my family, especially since I am denied visits and do not know their news. This is the greatest torment.”

Assaults and abuse of prisoners in custody

Occupation forces used ill-treatment, torture and inhumane and degrading treatment during arrests and beyond, as a systematic means of making arrest a form of collective punishment and spread fear and intimidation and cause greater harm to the prisoner and their family. The testimonies of a number of prisoners indicate the practice of torture and beatings from the first moment of arrest. Mahmoud Musa Salem, 18, from Bethlehem, was beaten by undercover forces arresting him, beating him all over his body and injuring his face and eye area, breaking his left hand and nose.

Salem says, “The undercover forces beat me when arresting me, they grabbed my hands, and then the undercover dressed to appear ‘Arab’ hit me in my eyes, another hit me in the nose, then threw me on the ground and kicked me in the head and all over my body, after which 4 beat me again before putting me in the jeep.

Torture and detention of family members to pressure the detainee

Despite the absolute international prohibition of torture in international conventions and laws, which clearly and explicitly define torture as “any act by which severe pain or suffering, whether physical or mental, is intentionally inflicted on a person for such purposes as obtaining from him, or a third person, information or a confession…” occupation forces continue to use torture and have consistently done so, whether through lengthy hours of interrogations, sleep deprivation, stress positions and denial of access to a lawyer, or by placing a prisoner in a detention center lacking the minimum elements to support human life, and carrying out in some cases arrests of members of prisoners’ families in order to increase the pressure on the detainee. Many prisoners have confirmed that they were tortured in detention centers by occupation forces and that the occupation authorities continue to use harsh methods of torture and ill-treatment extending beyond the interrogation period.

Al-Arouj was tortured during interrogation. During the visit of his lawyer at the Russian Compound, he said that he had been under interrogation for eight days, deprived of sleep. He as transferred to an interrogation room, where he was handcuffed to a plastic chair. This lasted for two days of intense interrogation, during which he was held in various stress positions sitting and standing, leading to intensifying pain, exhaustion and fatigue, as well as ongoing sleep deprivation and verbal abuse.

Ibrahim al-‘Arouj was arrested on 13 March 2014 and was awaiting trial but was returned to the Russian Compound interrogation center on 21 January 2016.