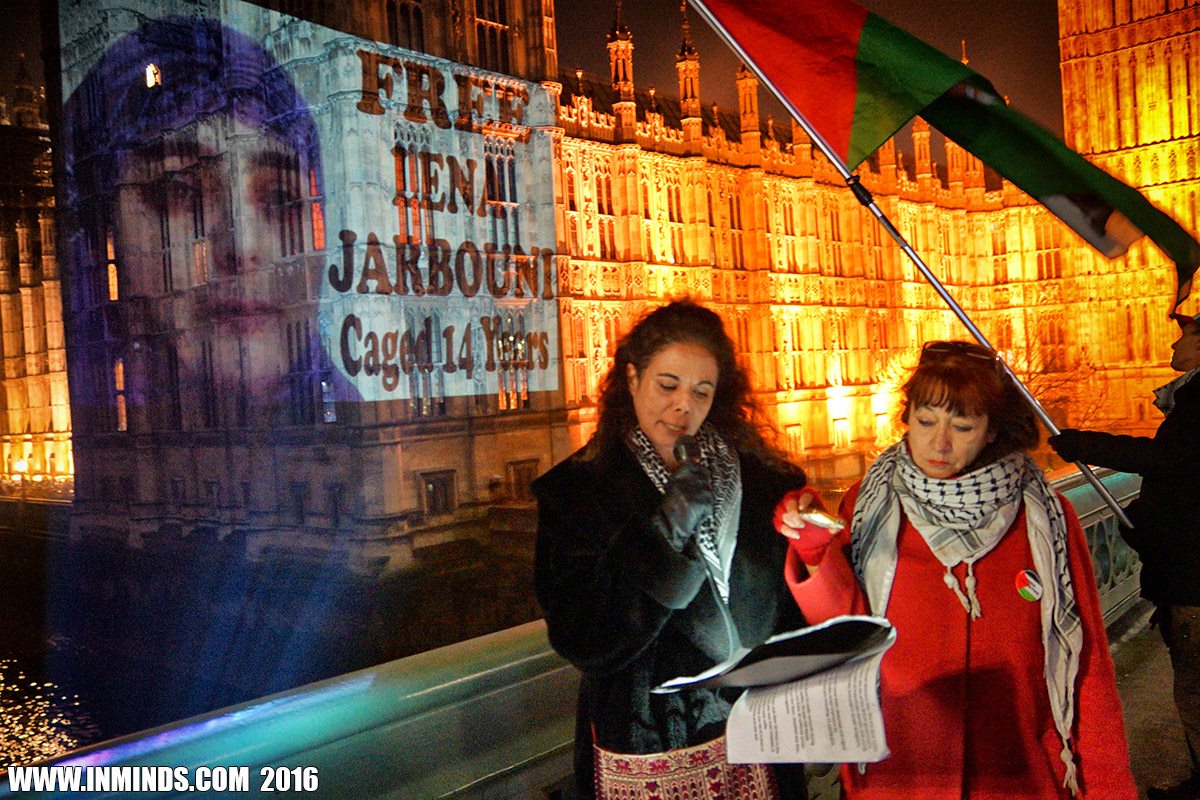 On Friday, 11 March, activists with Inminds protested outside Westminster Palace in London, demanding freedom for Palestinian women prisoners at the seat of the British Government and projecting large images on the building highlighting the cases of imprisoned Palestinian women such as Khalida Jarrar, Lina Jerbouni, and Shireen Issawi and girls like Dima al-Wawi and Marah Bakir. Their report follows:

On Friday 11th March 2016, in a week that marked International Womens Day, activists from Inminds gathered outside Westminster Palace, the seat of the British Government, to draw attention to the plight of Palestinian women political prisoners, in particular the 61 Palestinian women and girls who are currently caged in Israeli occupation dungeons.

They projected messages and images of the women prisoners on the walls of the Parliament. The projection garnered a wide audience, one person having seen the projection from the London Eye, walked all the way to Westminster to thank the activists for the projection.

Speeches were made on how three of the 13 imprisoned young girls – aged 14-16 years old, were brutally tortured during their interrogation. Also the case of 12 years old Dima Wawi was highlighted. She was abducted on her way to school, then interrogated illegally without the presence of her parents or her lawyer, before being locked up – possibly the youngest political prisoner in the world. 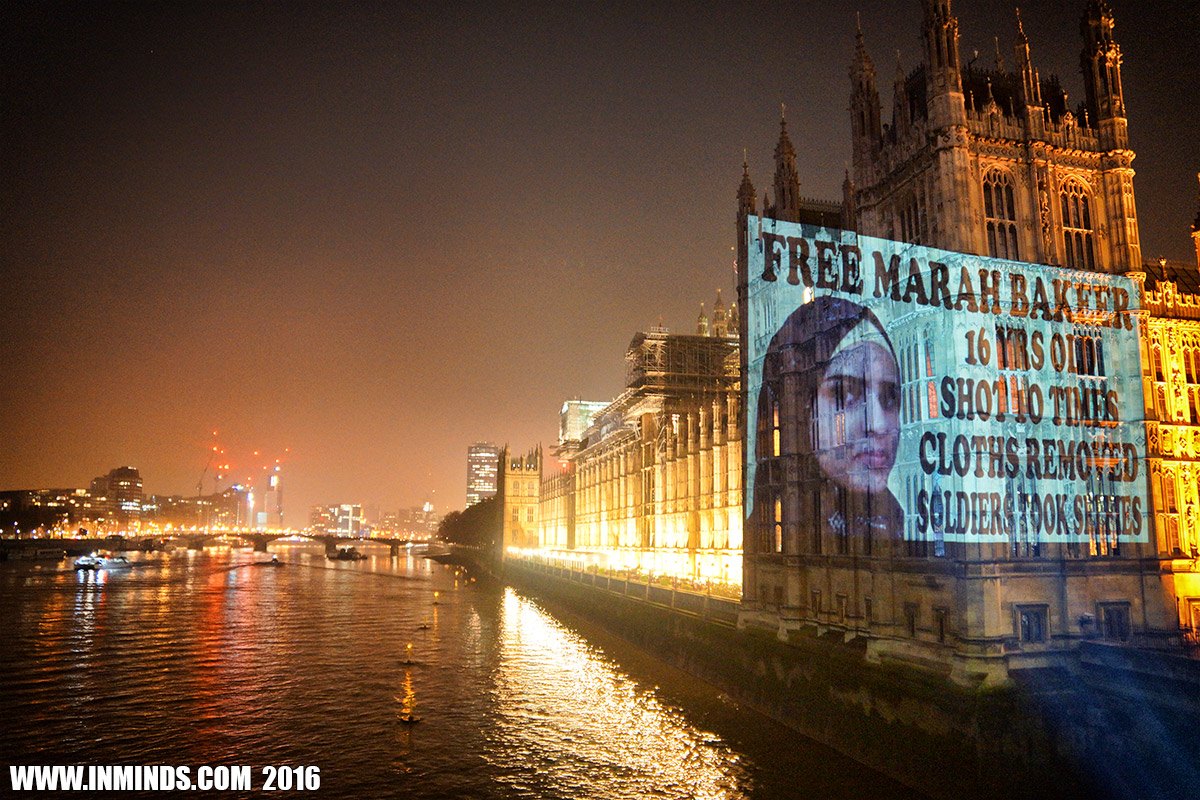 Wonderful news was announced during the protest that Mona Qa’adan, a Palestinian university lecturer who was locked up for her activism – one of the women prisoners we have been campaigning for for several years, has just been released. 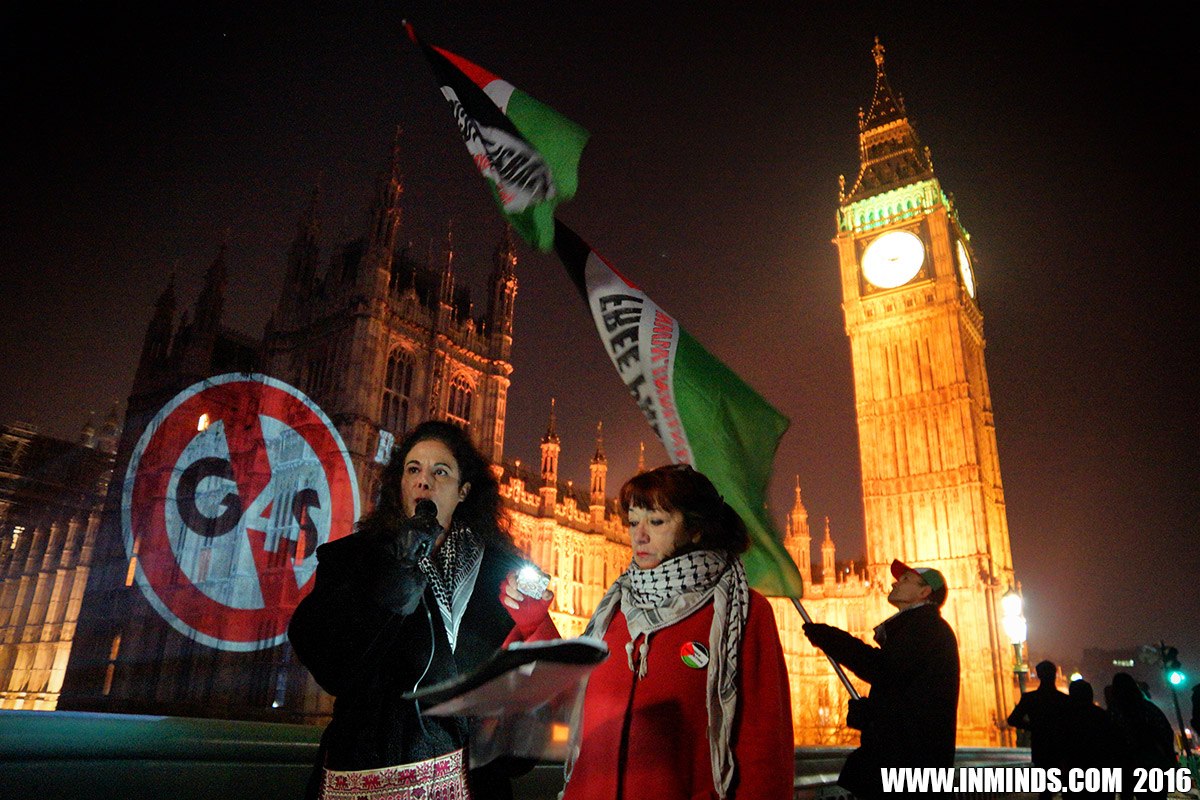 The British security company G4S secures HaSharon prison, along with many other Israeli prisons and interrogation centres, for Israel. They provide the entire security system for the prison including the central command room from where the whole prison is controlled. This week G4S announced its intention to sell its Israel operation within the next 12-24 months. This is not the first time G4S had made similar promises, and in the past it has not kept them. Activists from Inminds, who have held regular protests, every week or every other week, outside the global headquarters of G4S in London for nearly 4 years had a clear message for G4S – we dont want promises, we want action, and we want it now! Inminds sustained campaign against G4S continues.