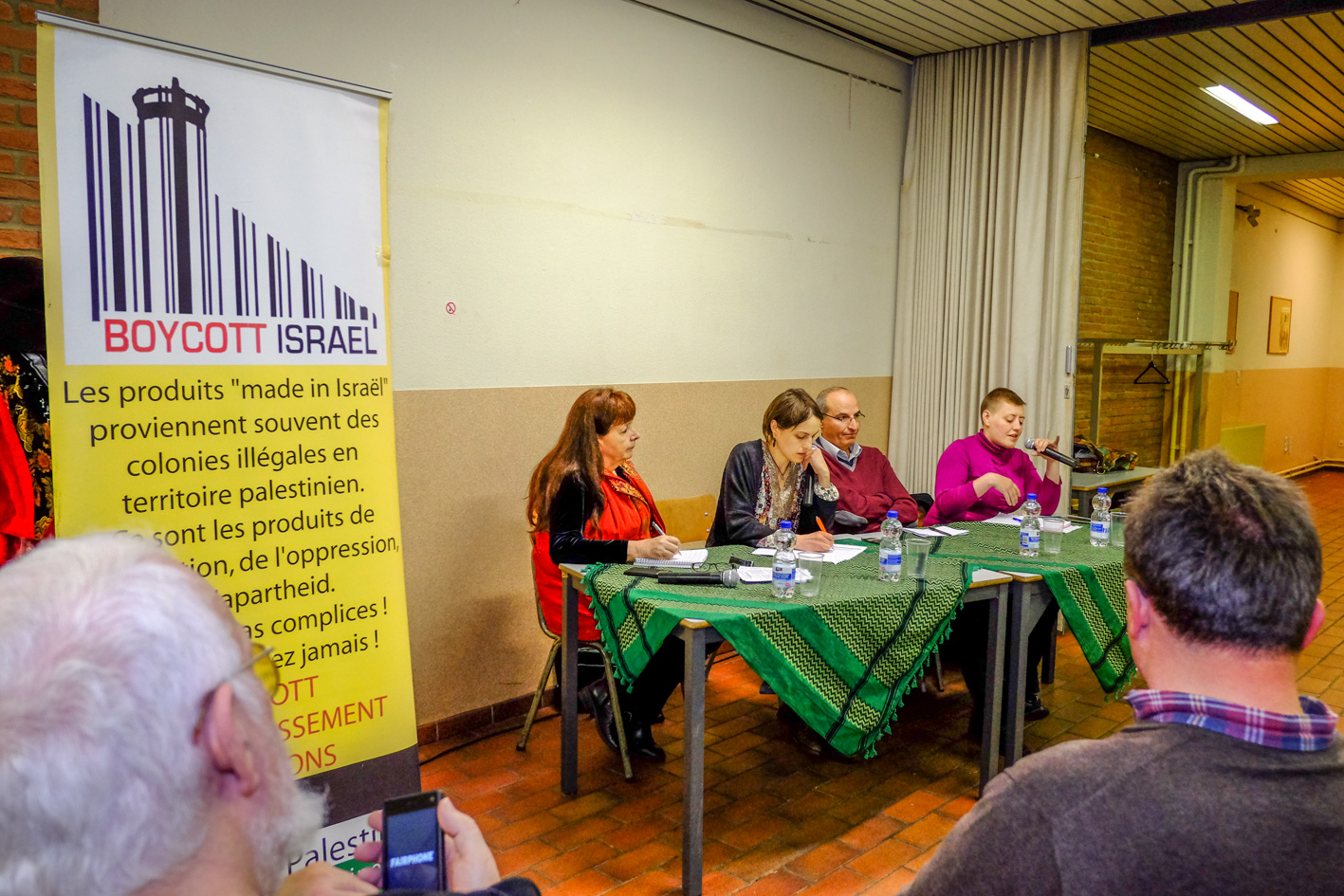 Samidoun Palestinian Prisoner Solidarity Network in Brussels participated in several events which took place as part of a visit to the city by Ayed Abu Eqtaish, accountability program director of Defence for Children International Palestine. Abu Eqtaish highlighted the struggles of Palestinian children threatened daily with imprisonment, torture and ill-treatment at a series of events in Brussels and the surrounding area following the release of DCI’s new report, “No Way to Treat a Child.”

On 26 April, Abu Eqtaish joined Maren Mantovani of Stop the Wall for an event organized by Intal, highlighting Palestinian campaigns for international accountability and calls for solidarity and action. Abu Eqtaish discussed the situation faced by Palestinian children, including the large-scale escalation in arrests since October 2015. He noted that approximately 700 children are prosecuted each year in the military courts, although this number is escalating dramatically – and that even children who are detained and released are significantly traumatized by violent arrest raids, physical and psychological abuse and torture. 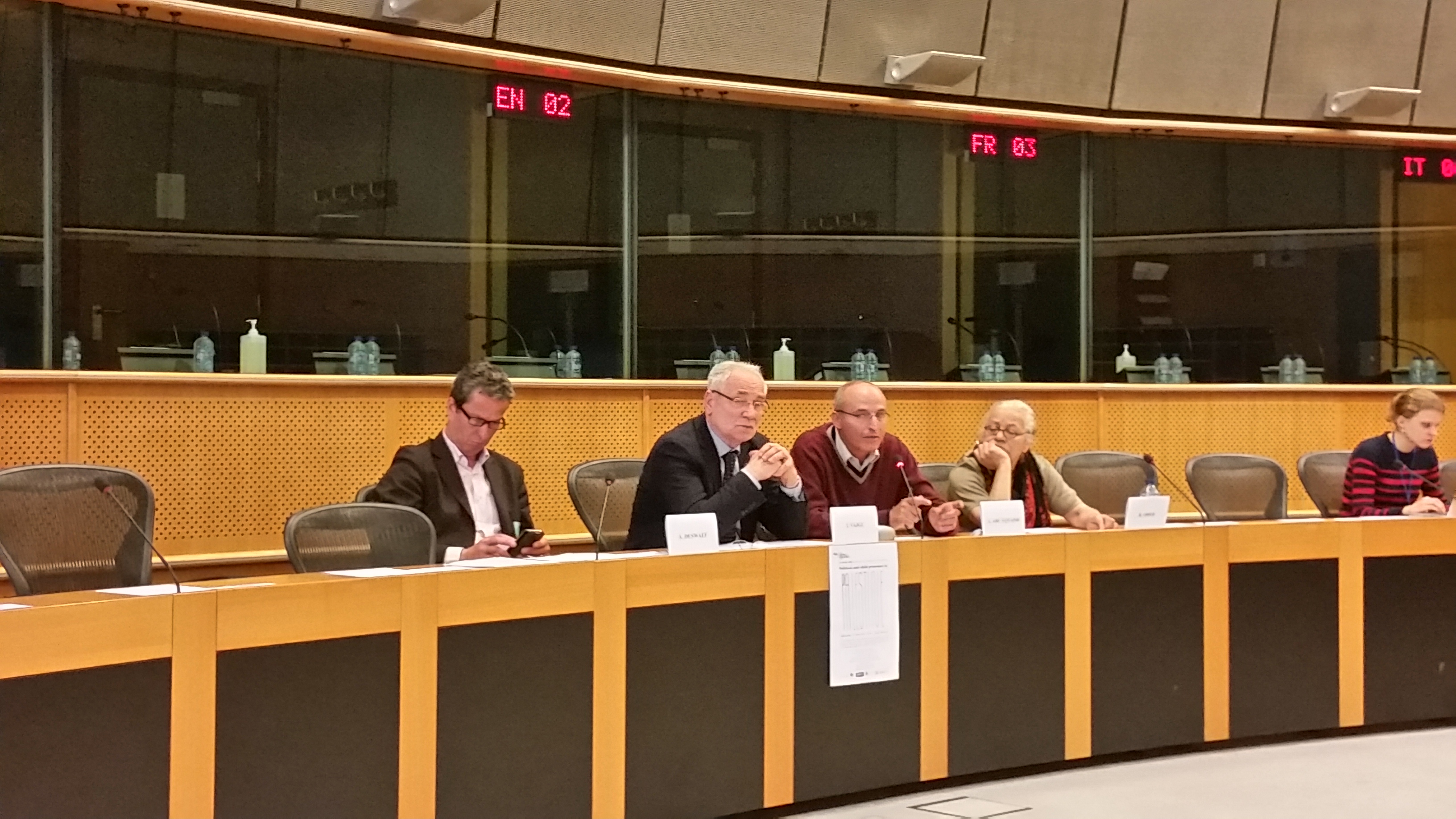 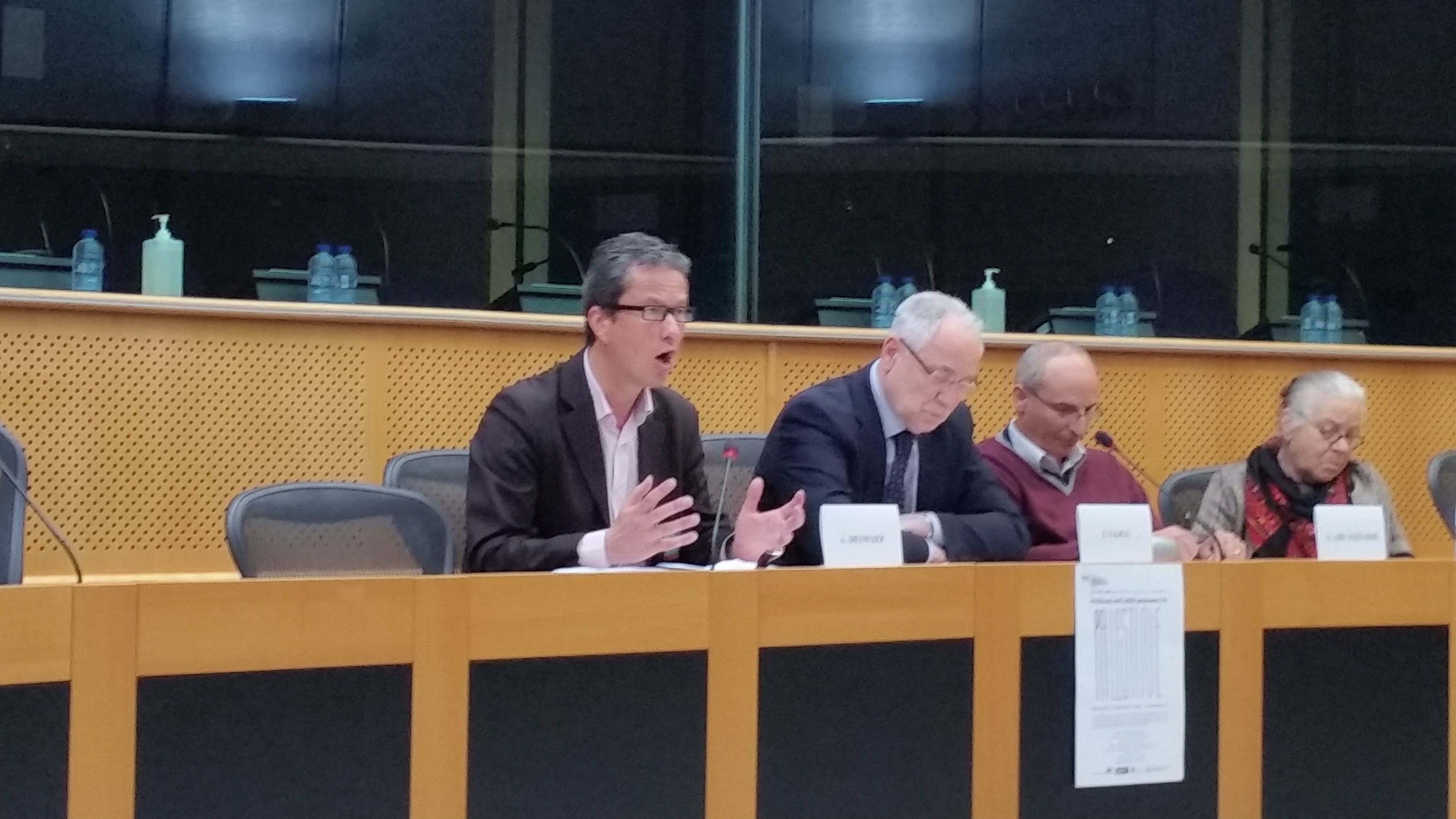 Speakers included Alexis Deswaef, lawyer and President of the League for Human Rights in Belgium, as well as Rawda Odeh, a former Palestinian prisoner in Israeli jails and the mother of prisoners. Deswaef recalled a legal delegation to Palestine in which he participated, which included observing an Israeli military trial. He noted the lack of resemblance to any standards of a fair trial and the conviction of over 99% of Palestinians who appear before Israeli military courts.

Odeh recalled her own experience of arrest and imprisonment; born in the month and year of the Nakba in May 1948, she recalled her involvement in the early years of Palestinian struggle. “After 1967, I was one who joined all of the Palestinian people in refusing the occupation. We will never accept it with flowers. We greeted it with resistance.” A student at Bir Zeit University, she served 4 years in prison; her father died immediately following her court hearing and she was not informed until months later. She recalled her later arrests, including one during the first intifada, when her home was invaded in front of her children, and the pain of separation from her children, noting that of the nearly 70 Palestinian women imprisoned today, many are also mothers. 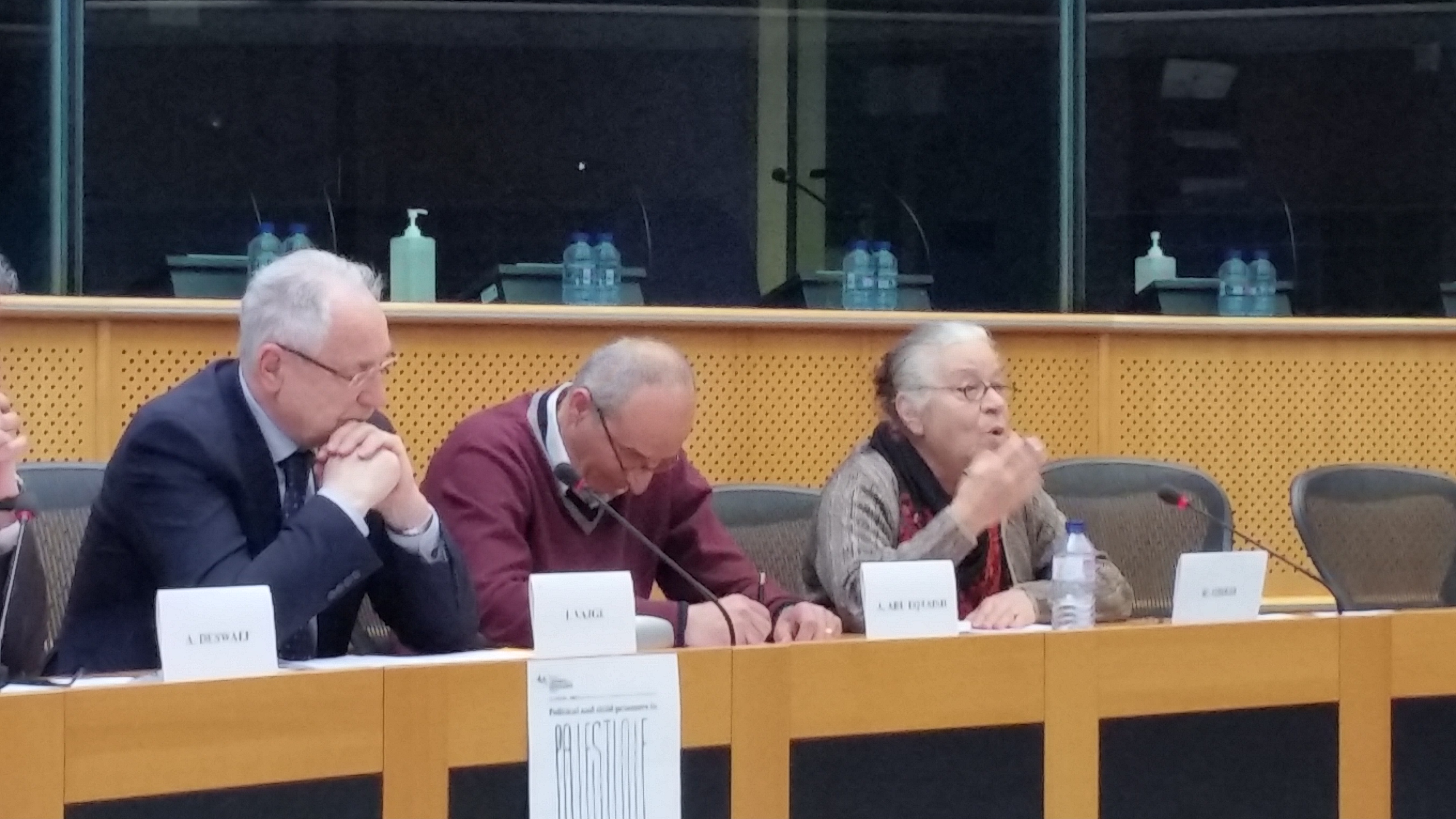 Abu Eqtaish highlighted the inequality and discrimination central to the Israeli military legal system, referring to the military commander of the West Bank, who can issue administrative detention and other military orders, as “dictator of the area” in the West Bank. He noted Israeli violation of the rights of children, and highlighted that since October 2015, resumption of administrative detention for children has escalated dramatically. He also noted the role of pretrial detention in the trials of Palestinian children; in the past 10 years, 87% of Palestinian children have been imprisoned prior to and throughout their trials. Further, he highlighted the role of solitary confinement in inducing forced and false confessions, recalling the cases of children who had been held for weeks at a time in solitary confinement.

The event also featured a screening of the short informational film, “700,” by Palestina Solidaritaet, a Belgian organization. The film highlights the impact of Israeli military raids, courts and imprisonment on Palestinian children:

The hearing at the European Parliament was followed by a community forum hosted by the Plate-forme Charleroi Palestine in Charleroi, Belgium. Samidoun’s Charlotte Kates joined Abu Eqtaish at the event, discussing the role of Israeli military courts and the imprisonment of Palestinians within the context of colonialism and Zionism. She recalled the origins of administrative detention in the British colonial mandate over Palestine and its re-imposition by the Israeli state. She emphasized the need for collective action, and in particular boycott, divestment and sanctions, to support freedom for Palestinian prisoners and the Palestinian people, and highlighted the global boycott of G4S, the security corporation that provides control rooms, equipment and security systems to Israeli prisons, checkpoints and police training centers. G4S has announced it plans to sell of its Israeli business after years of ongoing campaigns. 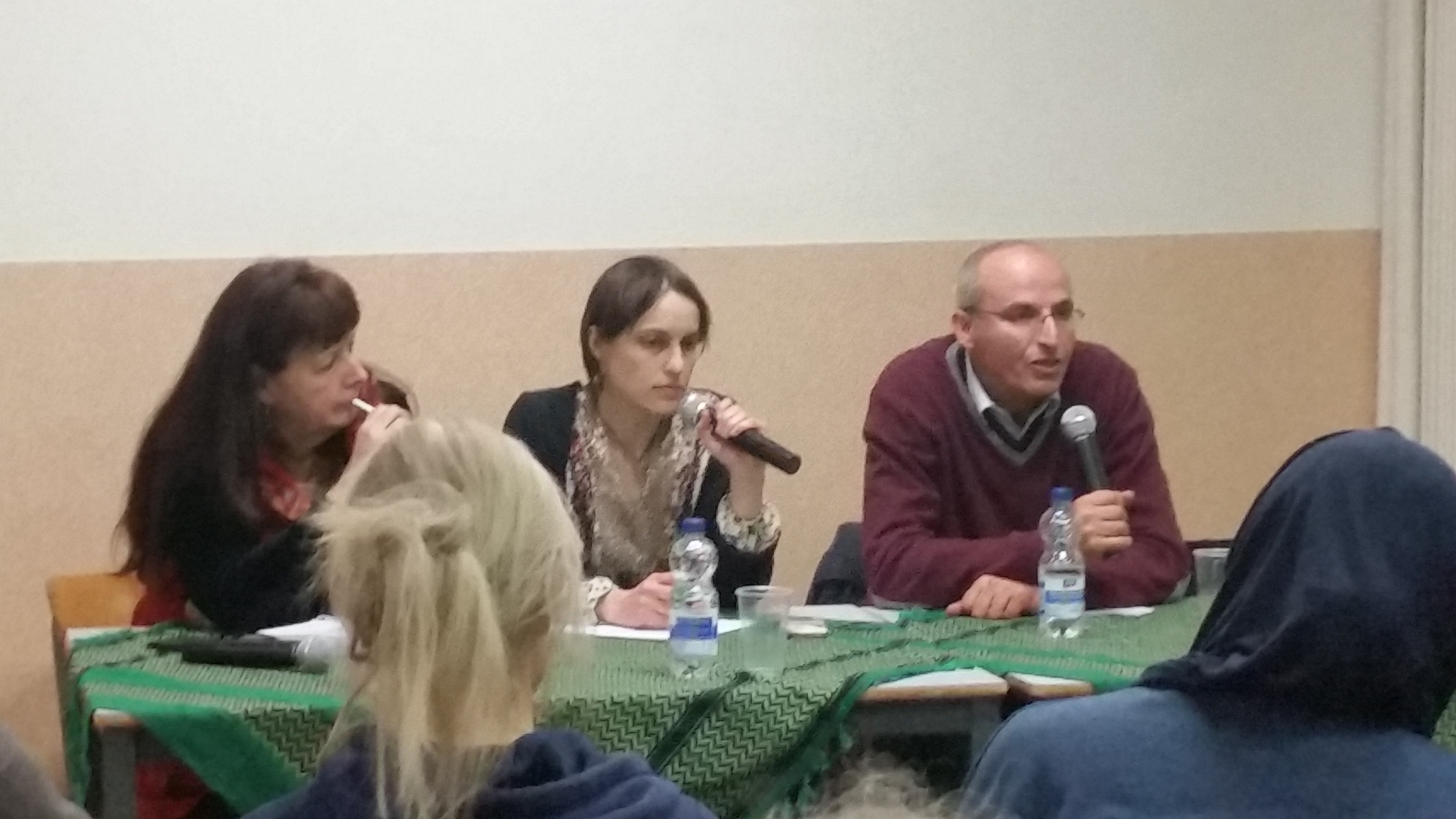 Abu Eqtaish again highlighted the suffering of Palestinian children, noting the long-term effects of trauma and imprisonment on Palestinian minors. He again focused on the role of solitary confinement in inducing confessions from imprisoned Palestinian children as part of a regime of torture and ill-treatment that includes physical beatings, threats and insults, and isolation, referring to 150 affidavits collected by DCI staff from Palestinian children. He recalled that at least 66 children had been held in solitary confinement between 2012-2015, for an average of 13 days – most in order to force confessions under duress. The event also highlighted Plate-forme Charleroi Palestine’s “Je boycotte Israel” (I boycott Israel) campaign, gathering 1,000 photos of people in Belgium expressing support for BDS to counter attempts to criminalize the campaign.

Events continued the following evening, 28 April, at the Presence et Action Culturelles center in Brussels, currently hosting an exhibition by two Palestinian artists, Mahmoud Alkurd and Iyad Sabbah, both from Gaza. PAC is a longtime partner of the Palestinian Circus School, whose performer and trainer Mohammed Abu Sakha, 24, is currently held in Israeli administrative detention without charge or trial. The event was moderated by Belgian journalist Dominique Rombaut, director of “Une cirque en terre ceinte,” a film about the Palestinian Circus School and its cultural work under occupation. 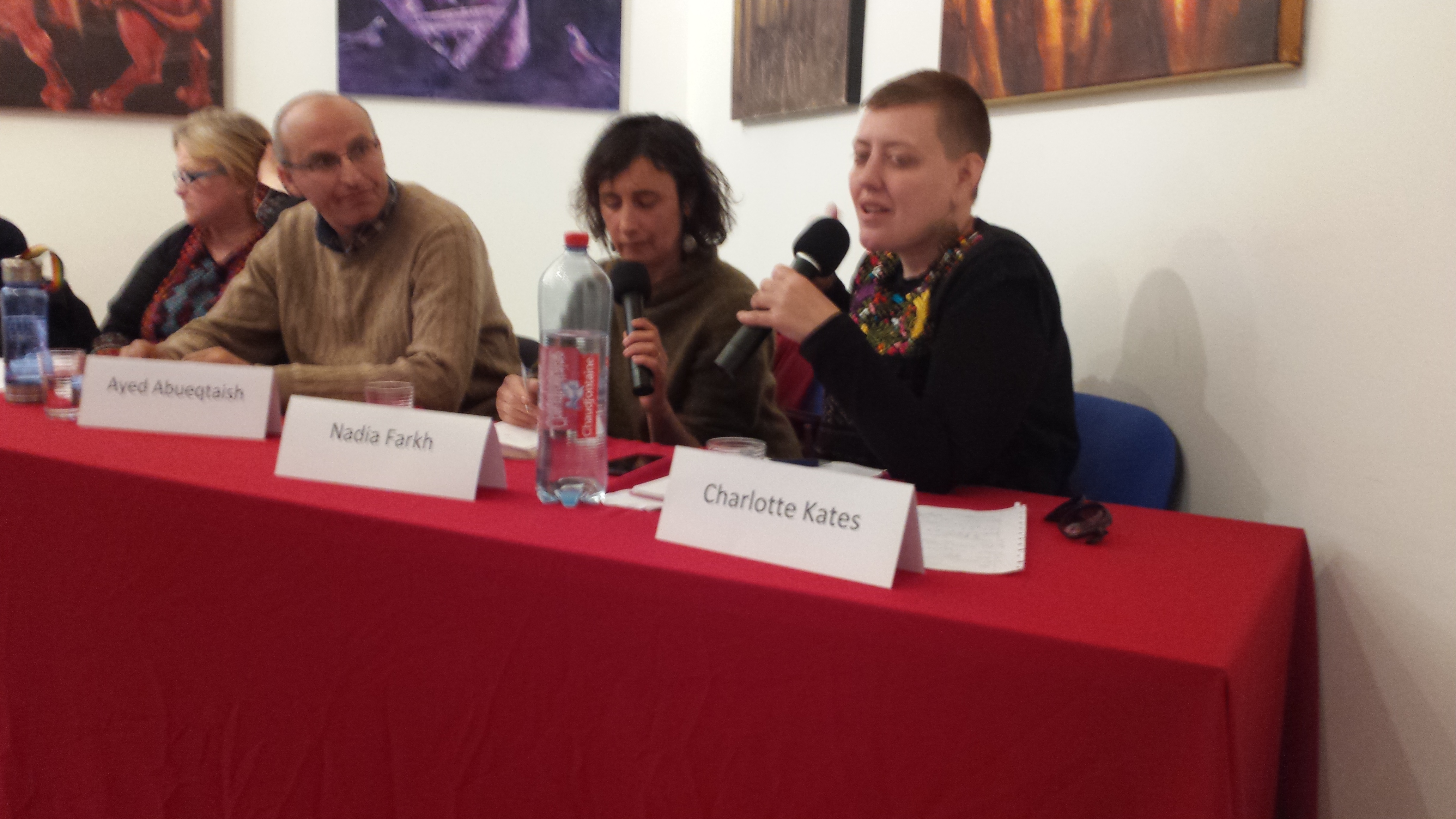 Abu Eqtaish of DCI and Kates of Samidoun were joined on the panel by Eric David, professor emeritus of international law at the Free University of Brussels and a contributor to the Russell Tribunal on Palestine and Gwenaelle Grovonius, a member of the Federal Parliament of Belgium representing the Socialist Party. She has proposed a resolution in the Committee on Foreign Relations in the Parliament on administrative detention, urging the Belgian government to act strongly to condemn the ongoing use of administrative detention.

Following presentations on the legal framework of administrative detention and why it violates international law, the specific impact on children, and highlights of specific cases including that of Abu Sakha, a spirited discussion was held in which participants urged Belgian officials, including the Socialist Party and supportive parliamentarians, to do more to advocate for justice for Palestinians, in particular for Belgian parties and not solely individuals to support the boycott, divestment and sanctions (BDS) campaign against Israel.