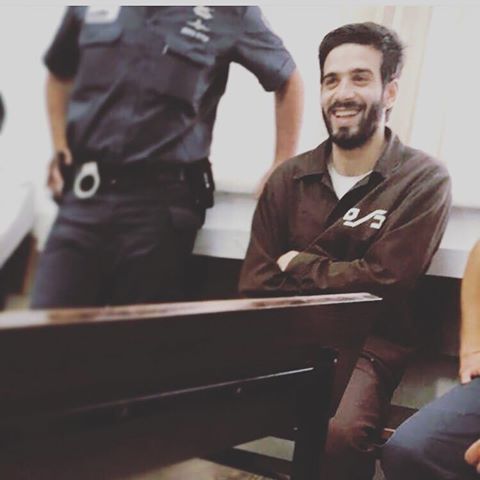 Hasan Safadi, 24, the Arabic media coordinator at Addameer Prisoner Support and Human Rights Association in Palestine, had his administrative detention order confirmed by the Jerusalem Magistrate’s Court on Monday, 4 July. Safadi was ordered to administrative detention in an order signed by Defense Minister Avigdor Lieberman on 10 June; he had been scheduled for release on bail on the same day.

Safadi was arrested on 1 May at the Karameh bridge between Jordan and Palestine’s West Bank, returning home from an Arab youth conference in Jerusalem. He was held under interrogation for 40 days, a period that was repeatedly extended, in Moskobiya interrogation center in Jerusalem. As Amnesty International notes, “Safadi told his lawyer that he had been subjected to sleep deprivation and tied in stress positions during his interrogation, treatment that violates the prohibition, under international law, of torture and other ill-treatment. He was also denied access to his lawyer for 10 days, from 12 to 22 May.”

The Magistrate’s Court had set his release for 10 June and collected bail in relation to allegations of visits to an “enemy state.” (Palestinians who visit Lebanon for conferences and other events are, for example, frequently hit with related charges.)

Safadi, a journalist and Addameer’s Arabic media coordinator, is one of 23 journalists imprisoned by Israel. He contributed to numerous publications about the situation of human rights in Palestine, including Assafir, a newspaper published in Lebanon.

As Safadi’s administrative detention was confirmed, Amnesty International joined Front Line Defenders in issuing an “Urgent Alert,” calling on AI members and supporters to write to Israeli officials to call for Safadi’s release.