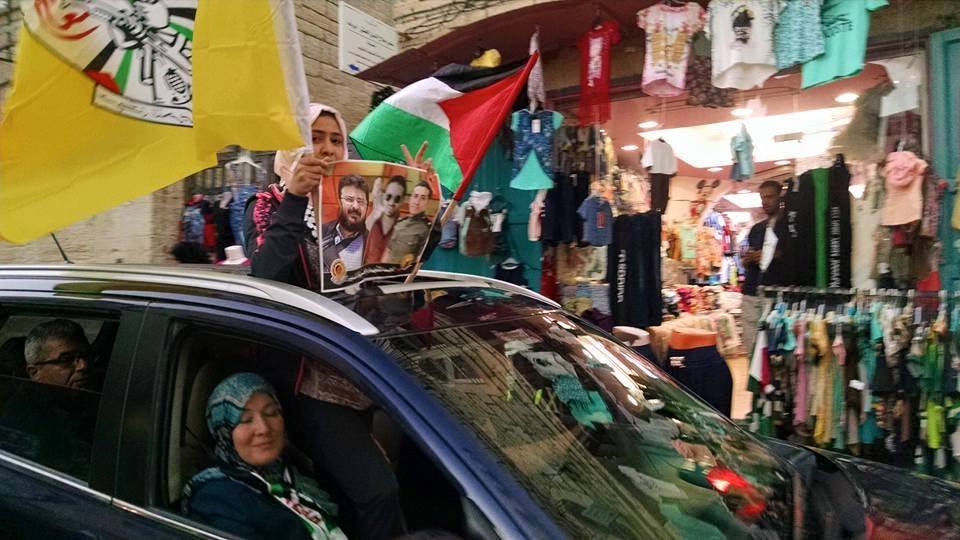 Nuran was welcomed at a checkpoint near Beit Sira west of Ramallah by her family as well as Prisoners Affairs’ Committee chair Issa Qaraqe, before returning to her family home in al-Khader near Bethlehem. She was imprisoned by Israeli occupation forces on 13 April at the 300 checkpoint, accused of carrying a knife in her school bag.

“Lawyer Abeer Bakr said on Tuesday that the release came after the Israeli Central Court accepted an appeal presented by the committee for Nuran’s early release. The committee said in a statement that Nuran was assaulted by soldiers when they detained her, and adamantly refuted the claim that she had a knife in her possession, saying that she was in fact detained for having an argument with a female soldier while trying to enter Jerusalem with her aunt,” reported Ma’an News.

Nuran’s older brothers, Mahmoud and Mohammed al-Balboul, are on their tenth day of hunger strike in protest of their administrative detention, imprisonment without charge or trial in Israeli prisons. Mohammed, 25, a dentist, and Mahmoud, 21, a university student, have been imprisoned since 9 June, ordered to administrative detention without charge or trial on the basis of secret evidence. Mohammed was ordered to six months imprisonment and Mahmoud to five months. They were accused of “incitement” for posting on Facebook, but were never charged or tried, and instead ordered detained on the basis of secret evidence. The two brothers have an appeal hearing against their detention on 21 July.

The three are the children of Sanaa al-Balboul and her husband Ahmad, who was assassinated by undercover Israeli occupation forces on 18 March 2008; he was accused of being a leader of the Fateh movement’s military wing, the Al-Aqsa Brigades, in Bethlehem.

After her release, Nuran spoke with Asra Voice, saying that the situation in HaSharon is “very bad…the occupation does not care about the age of girl prisoners or the status of sick and injured women.” She noted that injured prisoners are provided only painkillers. Nuran saluted her striking brothers and all of the women prisoners in HaSharon who supported her throughout her time there.

Meanwhile, the wounded prisoner Yasmine al-Zarou Tamimi, 21, from al-Khalil, was sentenced by Ofer military court to one year’s imprisonment, accused of attempting to stab an Israeli occupation soldier. Zarou was seriously wounded when she was shot by Israeli occupation forces on 13 February 2016; following several operations, she was transferred to HaSharon prison before she had healed, requiring significant support from fellow women prisoners and being placed at risk of infection and further injury. When she was shot, she was left to bleed on the ground for over an hour before receiving medical assistance. During her time in HaSharon prison, she had to be transferred back to the hospital as her hand was infected. Women prisoners in HaSharon and Damon prisons have repeatedly complained of overcrowding and unsanitary conditions of confinement.

Israa Abed, 29, shot by Israeli soldiers on 9 October 2015 in Nazareth, was sentenced to six months’ imprisonment and a fine of NIS 1500; she was seriously injured. Originally, Israeli authorities attempted to accuse her of seeking to stab soldiers, but this claim was disproven via video of the incident in the Afula central bus station. She was held under house imprisonment since 5 November 2015 until the end of the legal procedures, despite the acknowledgement of prosecutors that she posed no threat. In fact, prosecutors acknowledged her psychological condition and previous suicide attempts. However, she was still sentenced to six months’ imprisonment yesterday, 12 July, even after eight months of continuous house arrest.