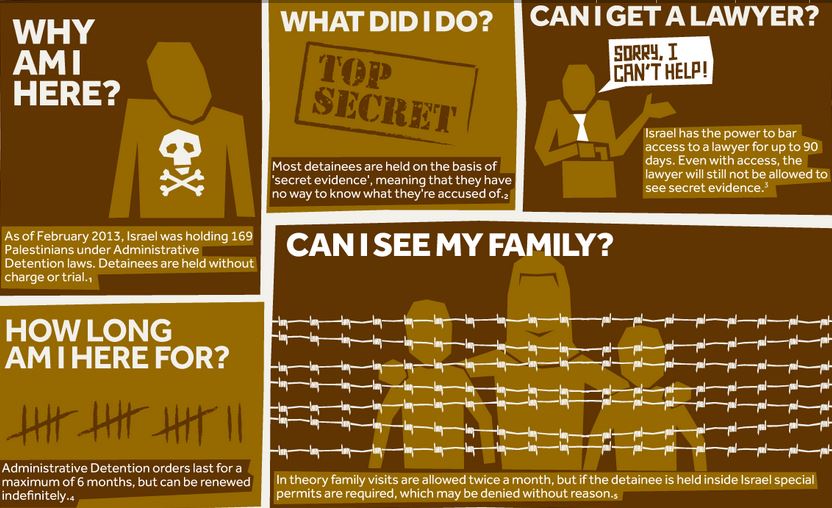 Four Palestinian prisoners are continuing a hunger strike against administrative detention after two prisoners ended their strike on 10 October in an agreement with the prison administration.

Jawad Jawarish and Maher Abayat ended their hunger strikes in protest of arbitrary transfer and isolation inside occpation prisons. They had refused food since 25 September 2016. Jawarish, 40, was transferred Monday from solitary confinement in Ashkelon prison to the Nafha prison; he was one of 120 Fateh prisoners recently transferred from Eshel to Nafha. Jawarish was then moved to the Ramon prison; during his strike, he was moved to Ramle and Ashkelon prison before returning to Nafha. He is serving a life sentence for participating in the Palestinian resistance during the second intifada. Abayat, 38, is serving a 25-year sentence for participation in the Palestinian resistance during the second intifada. He was held in solitary confinement in Ela prison; following his strike, he will be returned to general population in Ramon prison.

Anas Ibrahim Shadid, 19, from the village of Dura near al-Khalil is being held in Ofer prison. He is on his 17th day of hunger strike in protest of his administrative detention without charge or trial. He was arrested on 1 August 2016.

Ahmed Abu Fara, 29, from al-Khalil, is held in administrative detention without charge or trial since August 2016; he is also held in Ofer prison and on his 17th day of hunger strike. He was previously detained and spent two years in Israeli prison on charges of membership in Islamic Jihad. He married on 25 October 2015; after the occupation raid on his home in the middle of the night, his newly pregnant wife suffered a miscarriage.

Majd Hasan Abu Shamla, 24, from Yabad village in Jenin, is on his seventh day of hunger strike against administrative detention without charge or trial. He has been held under administrative detention since 27 January; after 51 days in the Jalameh interrogation center, he was ordered to six months imprisonment without charge or trial. His detention order was then renewed for an additional six months. A long time supporter of Fateh, he is held in the Negev desert prison, and is married with a one year old child.

Hasan Ali Rubayah, 31, from Maysaloon village in Jenin, is also on his seventh day of hunger strike against his imprisonment without charge or trial under administrative detention; he has been detained since 30 March. He was imprisoned in 2000 on charges of membership in Fateh and works in the Palestinian Authority security services. He is married with three children.

Abu Shamla’s father spoke with Asra Voice radio to say that his son and Rubayah were being subjected to pressure by the prison administration to end their strike, including threats to isolate them.

There are over 700 Palestinian prisoners held without charge or trial under administrative detention. Administrative detention orders – issued on the basis of so-called “secret evidence” – are issued for one to six months at a time and are indefinitely renewable. Some detainees have spent years at a time in detention without charge or trial. They are approximately one-tenth of the over 7,000 total Palestinian political prisoners in Israeli jails.