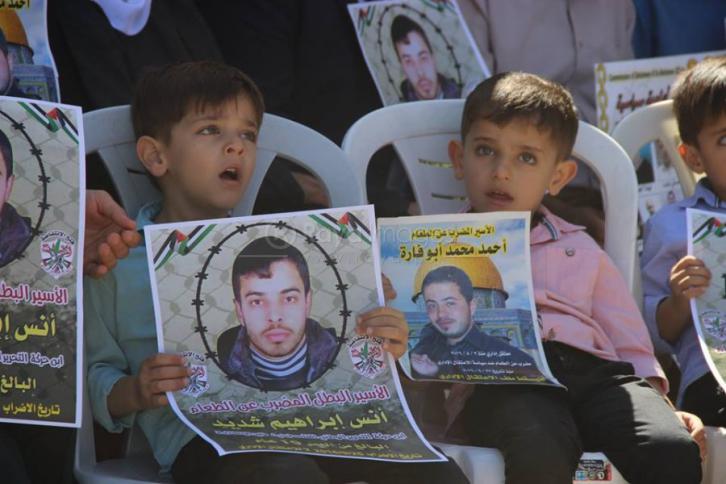 Palestinian hunger strikers are continuing their protest even as they reach a critical health situation and one slipped into unconsciousness last night, Sunday evening, 4 December. Both Anas Shadid, 19, and Ahmad Abu Fara, 29, have been on hunger strike since 25 September against their imprisonment without charge or trial under Israeli administrative detention.

Both are held at the Assaf Harofeh hospital. Their administrative detention has been “suspended” by the Israeli Supreme Court due to their health – but the orders against them remain in place and subject to renewal. The two have vowed to continue their strike until freedom. The Palestinian Prisoners’ Society also reported that Abu Fara lapsed briefly into unconsciousness last night and that doctors attempted to forcibly treat him through an IV of nutrients during that time. When he awakened, he rejected any form of artificial nutrition. The hospital has warned that both Shadid and Abu Fara are at risk of “sudden death.”

The two were visited in the hospital by Members of the Knesset for the Joint List, Ahmad Tibi and Osama Saadi, and Palestinian activist Qadri Abu Wasel. Tibi and Saadi called for the abolition of administrative detention and expressed their support for the hunger strikers, urging broader international popular support for their just cause.

Fellow hunger striker Ammar Hmour, who has refused food since 21 November in protest of his own imprisonment without trial, was transferred from the Negev desert prison to Ashkelon prison on Thursday; he continues to be held in isolation in retaliation for his hunger strike. https://www.maannews.com/Content.aspx?id=774256 Hmour’s isolation cell in Ashkelon is very small, cold, with a noxious odor, reported Palestinian lawyer Karim Ajwa. He has been imprisoned without charge or trial since 16 February.

Samidoun Palestinian Prisoner Solidarity Network urges escalated solidarity for the hunger strikers, particularly at this critical time. International solidarity can be key in supporting the struggle of these strikers, whose bodies and indeed, lives, are on the line for not only their own freedom, but that of all Palestinian prisoners.