Samidoun Palestinian Prisoner Solidarity Network gathered in New York City on Friday, 16 December for two actions: a protest to boycott Hewlett-Packard for its role in profiting from Israeli repression and imprisonment, and an evening to support the Holy Land Five, five Palestinian political prisoners in US jails serving up to 65-year sentences for their charitable and fundraising work. 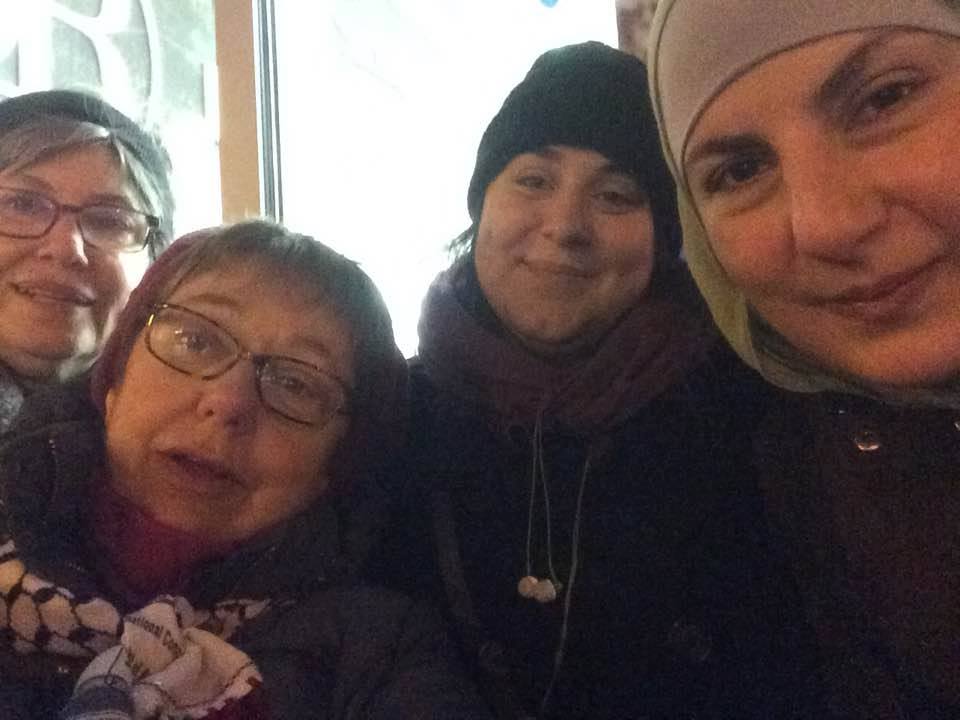 The five, Ghassan Elashi, Shukri Abu-Baker, Mohammed El-Mezain, Mufaid Abdulqader, and Abdulrahman Odeh, were convicted in 2008 in a retrial that featured testimony from an anonymous Israeli intelligence agent, alleging that the five and the HLF were responsible for “material support” to Hamas because they donated funds to Zakat committees. These committees are public charities in Palestine that also received support from USAID and other international aid agencies.

Since their conviction, teams of lawyers have been pursuing appeals and various legal campaigns while their family members are urging President Obama to issue executive clemency for the Five before leaving office. The massive sentences handed out in this case against well-known and respected Palestinian community leaders have created a chilling effect on Palestinian community institutions across political lines in the United States.

A small protest gathered earlier on Friday evening outside the Best Buy on Union Square, urging shoppers to boycott HP products. This is Samidoun’s second protest in the international campaign to boycott HP; over 100 cities internationally held protests against HP on an early-December week of action, and several countries secured victories against HP during the week. HP provides technology for Israeli checkpoints, military, population registry, settlements, and the Israel Prison Service.

The Holy Land Five event featured commentary from Nida Abubaker and Noor and Asma Elashi, daughters of two of the Five, as well as a screening of the Al-Jazeera World documentary that highlights the injustice of their case. The documentary is available for online viewing: