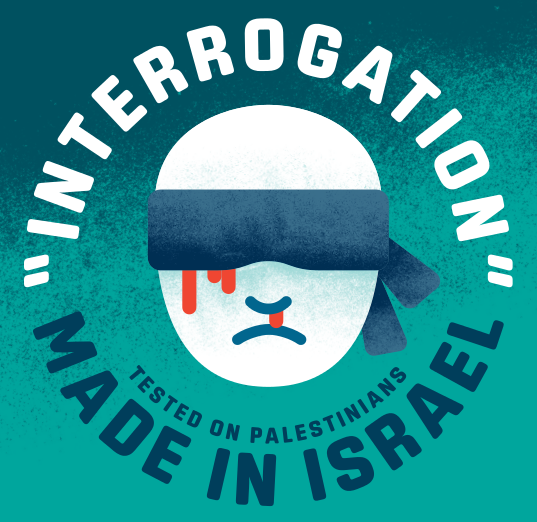 The EU-funded LAW-TRAIN project for collaboration on interrogation techniques between the Israeli police and European police and prosecutors’ offices is drawing increased criticism in Belgium for the role of the Belgian federal prosecutors’ office and the Catholic University of Leuven (KU Leuven) for legitimizing Israeli torture.

Samidoun is part of the broad coalition in Belgium urging the state and the university to leave the LAW-TRAIN project (as Portugal already did.) There is a public petition campaign calling on Belgian and university officials to stop LAW TRAIN. Sign on to the petition here: http://stop-law-train.be/

Hundreds of Belgian academics and cultural workers recently signed an open letter organized by BACBI, the Belgian Campaign for Academic and Cultural Boycott of Israel, calling on the government to “withdraw the Belgian Ministry of Justice from this highly contentious project. Such a withdrawal would signal to the Israeli politicians that Europe, and especially Belgium, will no longer tolerate the misdemeanors of their order and security forces against the Palestinian population.”

And most recently, a delegation of high-profile Belgian lawyers and human rights experts just returned from Palestine, where they investigated the use of torture by the Israeli police. Eva Brems, Professor at the Human Rights Center at the University of Ghent; Alexis Deswaef, chair of the Ligue des Droits de l’Homme; and Reine Meylaerts of the Study Group for Translation and Intercultural Transfer of the KU Leuven recently published an open letter in De Standaard, calling for Belgium and KU Leuven to get out of LAW-TRAIN.

Community members, students and academics in Leuven have also played a major role in protesting the university’s involvement in LAW-TRAIN, and four activists blocked the street before the university’s annual convocation, demanding it get out of the project.

English translation of the open letter from Eva Brems and the Belgian lawyers’ and human rights experts’ delegation below:

Charles Michel is visiting Israel and Palestine this week. This is a coincidence, because we were just there. For a week, we met with human rights organizations and experts. This was an impressive account of large-scale violations of international law, of ordinary people suffering great injustice, and sometimes also of resilience and solidarity.

The righteous indignation over the “new” human rights violator in the White House should not lead us to forget that there is another unpunished Western ally that gets away with structural discrimination and oppression of an entire people. The long duration of the occupation, which reaches its fiftieth year this year, has helped it to become habitual. When outrage subsides, it sends a perverse signal: if you violate human rights long enough, you are no longer held accountable. If we admit this, then it is the end of human rights. Belgium must not contribute to the normalization of illegal occupation and Israeli repression. What struck us greatly, compared with five or ten years ago, is the changing attitude of the Palestinian population. It is a long search for someone who believes in a two state solution. Confidence in the Palestinian Authority is at a low level. All eyes are on the international community for a glimmer of hope. What will our prime minister say on behalf of Belgium, and what will he remain silent about? Now, as the Israeli government institutes a re-intensified policy of aggressive colonization, a clear public condemnation of this is the least that Michel can do.

Now the Israelis have their wall, the final piece of a policy of land grabs and discrimination, assertively promoted in their approach to Donald Trump. He may also mention this hard question. But will he dare to speak out?

What premiers do and say are important in international relations. But the normalization of gross human rights violations is not only the work of governments. A number of social actors are doing so, consciously or unconsciously, as well. One painful example is the European research program Law-Train, in which the KU Leuven and the federal prosecution service are partners, as well as the Israeli police. It is unethical that the European Union accepts the Israeli police as a partner in research projects. And it is unethical that the KU Leuven and the federal prosecution service engage and continue in such cooperation. More important than the money that they receive in such a project, for the Israeli police, there is a “whitewashing effect.” The Israeli police can thus extract a form of legitimization and can uphold inward and outward appearances as the international community assists in sweeping the dirt under the carpet.

And there is a lot of dirt to clean. In Israel and the occupied territories, the actions of the police, the army and the security services create a constant climate of terror and denial of the fundamental rights of the Palestinians. The Committee Against Torture of the United Nations expressed this summer its ongoing concerns about torture and ill-treatment by these three entities. Israeli police are responsible in particular for the “security” in East Jerusalem. In addition, they make extensive use of arbitrary and heavy-handed arrests, ill-treatment and torture under interrogation, and of excessive force against demonstrations. The most poignant examples are the arrests of young people, including children of twelve years old, who undergo this treatment like adults without the assistance of a lawyer or another adult. All these facts have been documented by Israeli, Palestinian and international organizations. Yet it is nearly unheard-of for members of the police to be held accountable for their actions.

The Law-Train project, which is about training in interrogation techniques in the fight against international drug trafficking, is clearly not a project that directly subsidizes or promotes torture. The problem with Law-Train is the cooperation with a problematic partner. By working with the Israeli police on interrogation techniques, just as one would do with a police force that does not take these actions that we reported, the project contributes to the normalization of what should never be normal.

The Portuguese Ministry of Justice stepped out of this project, officially for budgetary reasons, but all signs indicate that they do not want to be complicit in this project of normalization. The federal prosecution service and KU Leuven can and must do the same. Ghent University approved in January a good human rights policy which excludes, inter alia, cooperation with partners who are guilty of serious human rights violations. It is difficult to believe that Rik Torfs, the rector of the Catholic University of Leuven, who earlier in his life took the lead on human rights in the Catholic Church, would today consider the human rights impact of his university to be unimportant.

Eva Brems is a senior full professor at the Human Rights Centre of Ghent University.