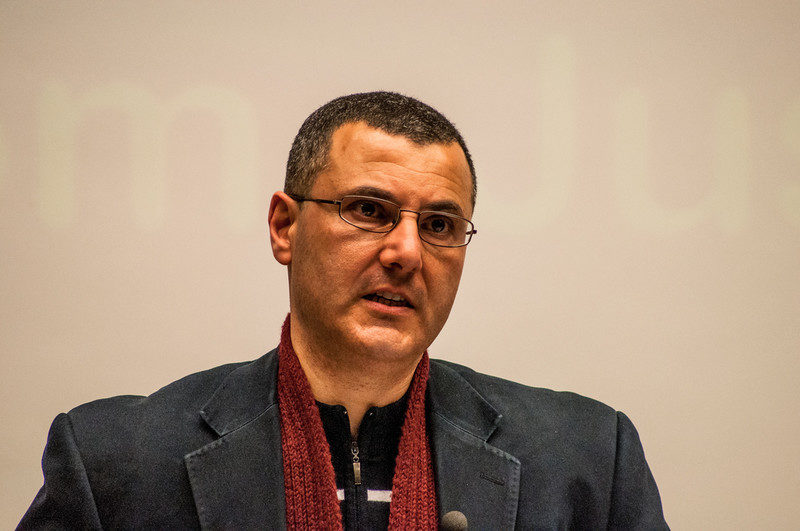 Leading Palestinian advocate for the boycott, divestment and sanctions (BDS) campaign for Palestinian rights, Omar Barghouti, has faced repeated attacks by the Israeli state, including attempts to undermine his residency or impose a travel ban upon him to prevent his international advocacy and hinder his work as a human rights defender. On Sunday, 19 March, Israeli tax authorities invaded the home of Barghouti and his wife Safa, detaining them for 16 hours on the first day; Barghouti has been subsequently interrogated for four days.

Samidoun Palestinian Prisoner Solidarity Network stands in solidarity with Barghouti and all Palestinian activists, strugglers and human rights defenders daily struggling against a settler colonial regime of criminalization, racism, apartheid and repression. In response to all attempts to criminalize or suppress BDS advocacy or campaigns for justice in Palestine, the most necessary response from all people concerned with justice is to escalate and build the movement for boycott, divestment and sanctions and the international isolation of Israel, to demand justice and liberation for the land and people of Palestine.

The Palestinian Boycott, Divestment and Sanctions National Committee (BNC) issued the following statement in response to the attacks on Barghouti, as part and parcel of the systematic attack of the Israeli government against BDS and the struggle for Palestinian rights and freedom:

A prominent Palestinian human rights defender and co-founder of the BDS movement, Omar Barghouti, has for years been subjected to intense threats, intimidation and repression by various arms of the far-right Israeli government, particularly after it considered the movement a “strategic threat” to its entire system of injustice against Palestinians.

At a March 2016 conference in occupied Jerusalem, several Israeli government ministers threatened Omar and key BDS human rights defenders with severe measures, including “targeted civil elimination” – a euphemism for civil assassination. The Ministry of Strategic Affairs last year established a “tarnishing unit,” as exposed in the Israeli daily Haaretz. This unit’s job is to tarnish the reputation of BDS human rights defenders and networks.

It is in this context that the Israeli tax department’s investigation of Omar and his wife, Safa, must be understood. After failing to intimidate them through the threat of revoking Omar’s permanent residence in Israel, and after the effective travel ban imposed on him proved futile in stopping his human rights work, the Israeli government has resorted to fabricating a case related to Omar’s alleged income outside of Israel to tarnish his image and intimidate him.

The fact that this investigation includes a travel ban and that it comes a few weeks before Omar Barghouti is scheduled to travel to the U.S. to receive the Gandhi Peace Award jointly with Ralph Nader in a ceremony at Yale University proves its true motive —repression.

The fact that the Israeli government publicized the inflammatory fabrications against Omar just 24 hours after he was taken in for investigation shows beyond doubt that the investigation’s real goal is to tarnish his reputation.

No matter what extreme measures of repression Israel wields against the BDS movement or its human rights defenders and vast network of supporters, it cannot stop this movement for human rights. Bullying and repression can hardly affect a grassroots movement that grows in people’s hearts and minds, empowering them to do the right thing — to stand on the right side of history, against Israel’s fanatic regime of apartheid, occupation and ethnic cleansing, and for freedom, justice and equality for the Palestinian people.

This latest desperate chapter of repression and intimidation by the Israeli government against Omar Barghouti is the strongest indicator yet of the failure of the Israeli regime of occupation, settler-colonialism and apartheid to slow down the impressive growth of the BDS movement for Palestinian rights.

The Palestinian BDS National Committee (BNC) is the largest coalition in Palestinian civil society. It leads and supports the global Boycott, Divestment and Sanctions movement. Visit www.bdsmovement.net and follow @BDSmovement