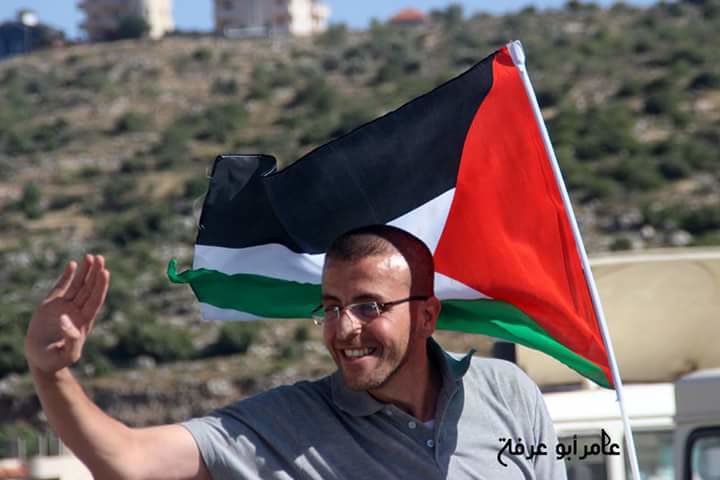 On his 33rd day of hunger strike, Friday, 10 March, imprisoned Palestinian journalist Mohammed al-Qeeq announced the suspension of his strike with an agreement for his release in mid-April, three months after his arrest on 15 January by Israeli occupation forces.

Fayha Shalash, al-Qeeq’s wife, said that he will begin a series of medically-supervised processes to lift his strike; he was transferred to Assaf Harofeh, a civilian hospital, on 8 March after severe deterioration in his health, especially considering his medical weakness following his 2016 strike.

Shalash specifically emphasized that al-Qeeq is dedicating this victory to the spirit of Basil al-Araj, the Palestinian youth activist shot down by Israeli forces on 6 March.

Zabarqa said that the victory also came following a court hearing on 9 March in which he defended al-Qeeq’s activism and organizing, saying that the military prosecutor was required to return with further justification in the next court session and instead agreed the following day not to renew al-Qeeq’s administrative detention.

Khader Adnan, fellow long-term hunger striker and former prisoner, said that al-Qeeq’s victory is a new blow against the policy of administrative detention, emphasizing that “the victory of the heroic brother Mohammed al-Qeeq brings joy to our hearts after the martyrdom of our brother Basil al-Araj.”

Samidoun Palestinian Prisoner Solidarity Network salutes Mohammed al-Qeeq once again on his steadfastness, struggle and success in confronting the policy of administrative detention and the political imprisonment of Palestinians. We urge all support for his fellow imprisoned Palestinians, including hunger striker Jamal Abu Leil on his 23rd day of hunger strike, and demand an immediate end to the policy of administrative detention and freedom for all Palestinian prisoners. We also echo the words of Fayha Shalash and Khader Adnan in linking the struggle of Mohammed al-Qeeq with the assassination of Basil al-Araj, and salute both of these dedicated strugglers for the freedom of Palestine, its land and its people.