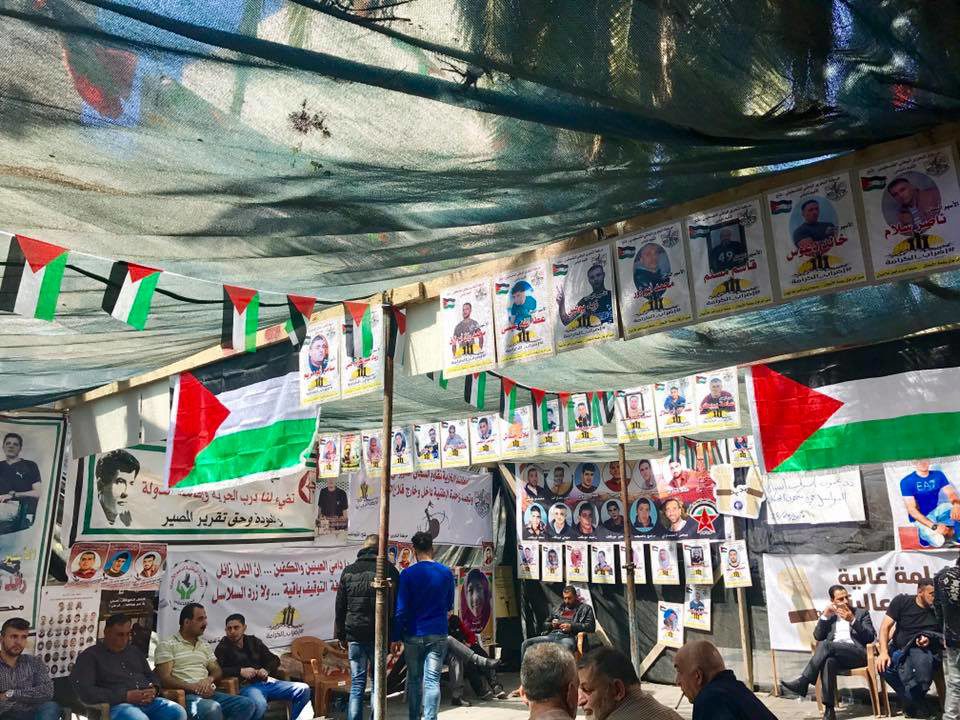 The over 1500 hunger strikers have a series of demands, including an end to the denial of family visits, the right to appropriate health care, the right to education in prison and an end to solitary confinement and “administrative detention,” imprisonment without charge or trial.

The following statement was released today in Arabic by the Palestinian Prisoners Movement on behalf of the strikers and is translated to English in full below:

In the name of God, the most merciful

“Those to whom hypocrites said, ‘Indeed, the people have gathered against you, so fear them.’ But it merely increased them in faith, and they said, ‘God alone is sufficient for us and he is the best disposer of affairs.'” – the Holy Qur’an

As the battle of empty stomachs (the battle of freedom and dignity) continues in its tenth day, a wide-scale targeting of activists and strugglers on hunger strike is taking place at the hands of the forces of the occupation prison administration, fully supported by the government of the Zionist enemy. Its prime minister and officials daily declare their refusal to deal with the just demands of the prisoners as they raise the ceiling of racist incitement against the prisoners while promising further oppression and abuse. They do not take advantage of the lessons of the past, where the prisoners have trurned the tables of the prison officials, the intelligence agencies and the occupation state through their steadfastness, determination and struggle. This is another battle in a series of battles fought by the prisoners’ movement throughout its history. It is a landmark of steadfastness and struggle, emphasizing the course of resistance, unity, liberation and victory.

In this context, we are sending a series of messages through this statement to the striking prisoners and those ready to fight in this battle, to the Palestinian people everywhere, to the national and Islamic forces, and to all forces of freedom in the world, in which we affirm our need for support, solidarity, participation and unity as prisoners to confront the challenges imposed by the government of occupation. In this context, we emphasize the following:

First, to the heroic striking prisoners carrying out the battle of empty stomachs for the tenth consecutive day, we are all with you in support and not only with words. The occupation prison administration will be subject to the free will of the captives. We speak with insistence that we will proceed until the achievement of our goals. We are now at the stage of biting our fingers; we are together as brothers, mujahideen and comrades from the first cry. Support is on the way and the coming days will carry new actions to escalate the pace of the strike and achieve its goals. The message now is first to stand up, first to insist and first to adhere to the demands, all of us, and we will stand united to confront the executioner.

Second, all dialogue will be with the striking prisoners and we will not allow any interference whatsoever. We also warn against rumors circulating about the strike that aim to suppress the morale of the strugglers and attempt to limit the popular support for the strike and create a climate of confusion and hesitation. We call for refusing to circulate the news items that the occupation is attempting to broadcast and promote.

Third, we call upon the masses of the Palestinian people for even more support and solidarity through the daily struggle and clashes with the occupation in all locations. Every serious action and movement shortens the duration of the strike and makes it clear to the occupation that the prisoners are not alone. In occupied Palestine ’48 and in Jerusalem, it is possible to be in front of the prisons, and in the West Bank, in the places of engagement with the occupation forces, and in Gaza, which is steadfast every day, your support is critical, and outside Palestine, you are the call of the campaign and the voice of freedom, so that the Palestinian cause will prevail.

Fourth, we call upon the national and Islamic forces to unite under a comprehensive program for Palestinian, Arab and international support and to exert all efforts to support this strike of freedom.

In conclusion, we affirm that the coming days bear the promise of victory, “and those who do wrong will come to know by what overturning they will be overturned.”

Your brothers, mujahideen and comrades
Palestinian Prisoners’ National Movement
26 April 2017
The tenth day of the strike of freedom and dignity