Hunger-striking Palestinian prisoners in Israeli jails are now on their 12th day of hunger strike in the “Strike of Dignity and Freedom.” Approximately 1500 Palestinian prisoners began the strike on 17 April, Palestinian Prisoners’ Day, for a series of demands, including an end to the denial of family visits, appropriate medical care for sick prisoners, and the end of solitary confinement and administrative detention, imprisonment without charge or trial.

A general strike throughout the West Bank and Gaza Strip on Thursday, 27 April stopped commerce, labor and government activities as people showed broad solidarity and support for the Palestinian prisoners.

Inside Israeli prisons, Palestinian prisoners continued to face repression. Hunger strikers have been repeatedly transferred from prison to prison and many thrown in isolation, in an attempt to stress and demoralize the hunger strikers while making it very difficult to obtain accurate information from inside the prisons. In addition, aside from some prisoners in Ofer and two visits in Ashkelon, hunger striking prisoners have been denied legal visits since the beginning of the strike. Prisoners’ personal belongings have been confiscated, including their clothing and blankets, and they have been denied recreation and Friday group prayer. In addition, many prisoners have reported the confiscation of salt, which prisoners consume with water during the strike.

On Thursday, repressive units continued to invade prisoners’ sections in Ramon prison following a raid on striking prisoners’ sections in Ashkelon prison on Tuesday, when striking prisoners were assaulted for refusing to stand up for inspection.  Palestinian lawyer Karim Ajwa reprted that five prisoners were wounded in the face and head and taken to the prison clinic. Ajwa also said that internal disciplinary hearings were conducted against the hunger strikers and sanctions imposed on them as well as fines of 500 NIS ($125) each; he said that salt was also taken from the prisoners in an attempt to break the strike. After 11 days of denials, Ajwa finally obtained a legal visit with Nasr Abu Hmeid and Said Musallam, who also reported that the striking prisoners are boycotting medical examinations and that there are serious health concerns for the ill prisoners participating in the hunger strike.

Despite the risks, two more sick prisoners, Mutawakkil Radwan and Khalil Shawamrah, announced their participation in the ongoing hunger strike.

The International Committee of the Red Cross also reported meeting with hundreds of hunger strikers in Gilboa prison on Thursday; the ICRC stated that they would arrange additional visits in the coming days. “We are fully aware that we are currently the only contact point with the outside world for detainees on hunger strike,” said an ICRC spokesperon, noting that the priority was placed on exchanging verbal messages between Palestinian prisoners and their families.  However, it should be noted that one demand of the hunger strike – for the restoration of twice-monthly rather than once-monthly family visits – is a demand on the ICRC to stop its “cost-cutting” measures that have further isolated Palestinian prisoners.

In the protests to support the strikers on Thursday, 500 Islamic Jihad cadres in Gaza engaged in a one-day hunger strike in Gaza City in support of the strikers, amid large marches and demonstrations organized by all Palestinian political parties. In Rafah, hundreds of lawyers and other activists participated in a human chain in support of Palestinian prisoners on hunger strike, urging international action to defend the rights of the prisoners.

Meanwhile, in Nablus, Palestinian former prisoners and long-term hunger strikers Khader Adnan and Mohammed Allan, as well as Palestinian Prisoners’ Committee coordinator Maher Harb, were attacked and then detained for several hours by Palestinian Authority security forces before being released, as they participated in a march to support the prisoners.  The prisoners of the Popular Front for the Liberation of Palestine, the Democratic Front for the Liberation of Palestine and Islamic Jihad issued a message from Israeli prisons in support of Khader Adnan, denouncing “desperate attempts by some parties to incite against the activist Khader Adnan as a prelude to physical tageting,” and saying that Adnan is a symbol of unity and resistance who is threatened by the occupation. 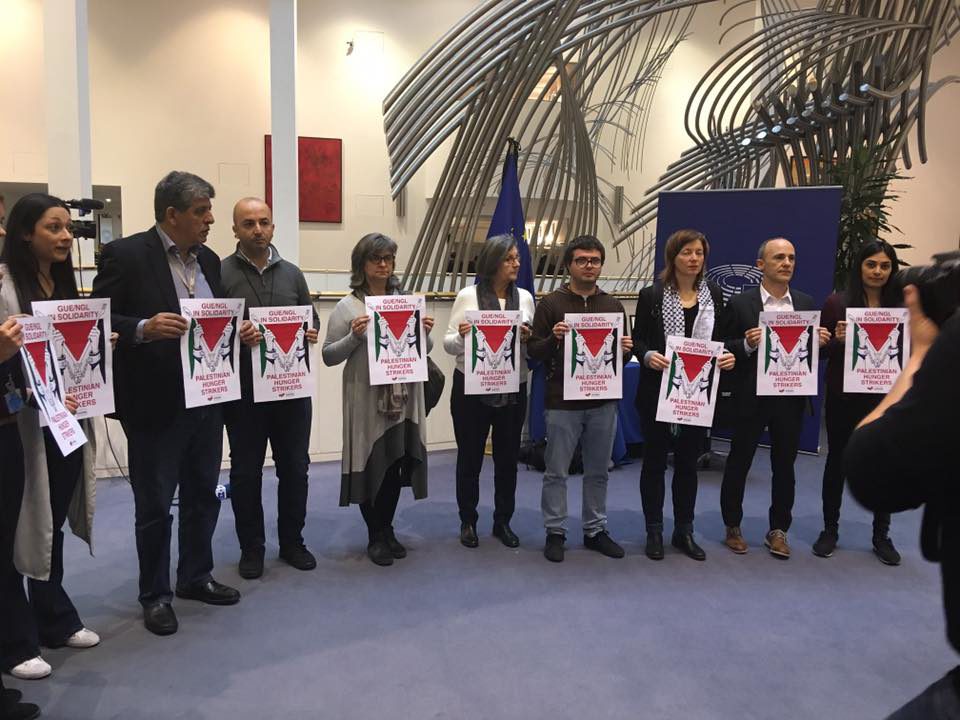