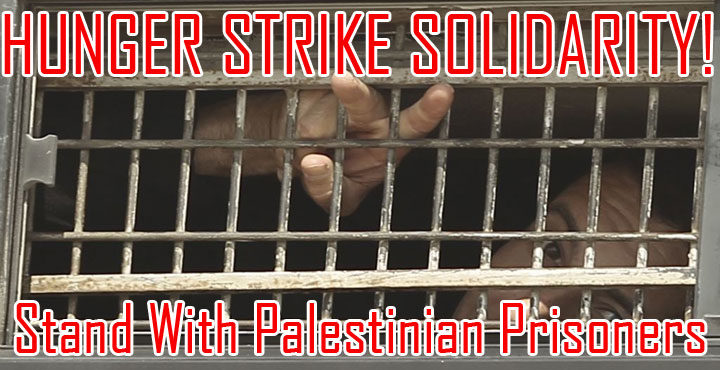 Palestinian prisoner Fouad Bisharat is currently on his ninth day of hunger strike, reported Ma’an News. Bisharat, 28, from the village of Tamoun near Tubas, is on hunger strike in protest of the renewal of his Israeli administrative detention – imprisonment without charge or trial under Israeli occupation military order – for the third consecutive time. Bisharat has been imprisoned since September 2016; he was first ordered imprisoned without charge for four months, then three additional months, and now once again for four months; his detention will be once again renewable at the end of that period.

Also on hunger strike is Palestinian prisoner Mohammed Mahmoud Abu Shawka, 23, from Gaza City, who was seized on 8 March at the Container checkpoint between Bethlehem and Jericho despite having a valid permit for study in the West Bank after receiving a grant from the Arab League. Abu Shawka is active with the Fateh youth at Al-Aqsa University in Gaza. Abu Shawka has been on hunger strike for 10 days in protest of his imprisonment.

On Monday, 3 April, Palestinian prisoner Mahmoud Saada, 41, suspended his open hunger strike which he conducted for 24 days in protest of his ongoing interrogation and detention in Jalameh interrogation center since his arrest in February 2017. He suspended his strike after an Israeli occupation military court hearing at the Salem military court. His detention was extended for seven more days, after which Palestinian lawyer Saleh Ayoub said he will be indicted before a military court or released; Ayoub said further that he will be transferred from Jalameh no later than Thursday.

Former hunger striker Raafat Shalash, 34, will be released in July of this year after the Israeli occupation Supreme Court issued a “fundamental” administrative detention order against him. A re-arrested former prisoner who has spent a total of seven years in Israeli jails, Shalash has been imprisoned since 17 January 2016 without charge or trial under administrative detention.