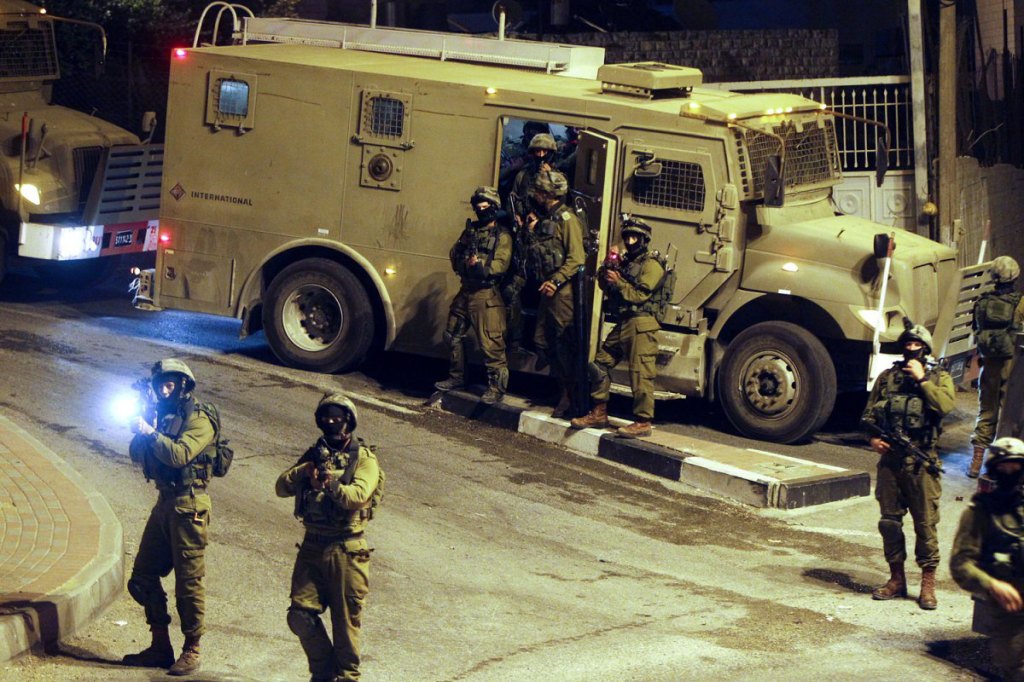 In the month of June 2017, 388 Palestinians from the West Bank, Gaza Strip and Jerusalem were seized by Israeli occupation forces, including 70 children and six women.

According to documentation, occupation forces arrested 126 Palestinians from Jerusalem, 70 from al-Khalil, 38 from Nablus, 32 from Ramallah and el-Bireh, 30 from Jenin, 30 from Tulkarem, 27 from Bethlehem, 14 from Qalqilya, seven from Jericho, seven from Tubas, six from Salfit and one from the Gaza Strip.

There are currently approximately 6,300 Palestinian political prisoners in Israeli jails, including 57 women, 10 minor girls, 300 children and 486 administrative detainees, as well as 11 detained members of the Palestinian Legislative Council (as of 11 July.)

In terms of the number of administrative detention orders, 61 detention orders were issued in June, including 19 new orders and 42 renewals for the second and third time.

Despite the prohibition on torture in international humanitarian and human rights law, in particular the Convention Against Torture, which has clearly defined torture as “any act by which severe pain or suffering, whether physical or mental, is intentionally inflicted on a person for such purposes as obtaining from him, or a third person, information or a confession.” However, the occupation authorities, in defiance of the Convention, continue to practice torture in various forms against Palestinian prisoners, including children, in the interrogation centers. Based on the visits of lawyers of partner institutions to Israeli interrogation and detention centers, it has been found that these authorities continue to use psychological and physical methods and forms of torture and ill-treatment during interrogation, most notably shabeh or stress positions, shouting, insults and humiliation, lengthy hours of interrogation, threats of arrests of family members, sleep deprivation, denial of access to lawyers or imprisonment in an interrogation center lacking the minimum conditions for human life, in order to pressure them with a view toward extracting a confession in order to secure a subsequent conviction.

Baha Ka’adan from Tulkarem has been imprisoned since 17 April 2017. During a visit by his lawyer to the Jalameh interrogation center, he confirmed that he was subjected to a harsh interrogation lasting nearly two months. He was interrogated continuously over long hours and days, denied sleep or sleeping in the interrogation chair, to which he was shackled hand and foot, in addition to the use of yelling, cursing and threatening the him with arresting his family members and destroying his house. During interrogation, his home was invaded by Israeli soldiers accompanied by interrogators who brought Baha in order for him to see occupation soldiers breaking into the home and destroying his belongings, shouting at his family and bringing his mother in front of him in an attempt to pressure him to confess.

Palestinian student priosner Istabraq Yahya of al-Ram confirmed during a legal visit that she was mistreated during her interrogation at the Moskobiya interrogation center. Interrogators yelled repeatedly in her face, threatening her with lengthy detention and verbally abusing her, threatening members of her family. At the beginning of the interrogation, she was questioned continuously for 12 consecutive hours during which she was deprived of sleep and shackled hand and foot to the interrogation chair.

Issue under the Spotlight

** Note: Palestinian lawyer Muhammad Allan ended his hunger strike on 11 July after 34 days in an agreement that he will not be detained administratively. He is before Israeli military courts currently.

Palestinian prisoner Muhammad Allan of the town of Einabus in Nablus has been on hunger strike since 8 June 2017 in protest against his re-arrest and the threat of administrative detention without charge or trial. He has been transferred to a military trial. Allan, a lawyer, has been arrested on multiple occasions. In 2015, he engaged in a hunger strike for more than two months.

The partner institutions consider the re-detention of Muhammad Allan to be a very dangerous and threatening action by the occupation. They also warned of the repercussions to his health of a new lengthy open hunger strike and warned occupation authorities against the continuation of their approach to Allan and others subject to re-arrest and imprisonment without charge under administrative detention.

The partner institutions examine aspects of legal protection and guarantees provided by international humanitarian and human rights law for detainees. There is an ongoing Israeli pattern of violations of the principles laid down in these conventions that prohibit such acts, including the following:

1. The arrest of Palestinian civilians violates legal prohibitions on arbitrary detention in international human rights law, including section 9 of the 1948 Universal Declaration of Human Rights and articles 9 and 10/1 of the 1976 International Covenant on Civil and Political Rights.

2. The practices of torture and ill-treatment violate clear criteria in international human rights law, as follows:

a) violation of section 31 of the 1955 Standard Minimum Rules for the Treatment of Prisoners, which stipulates that “Corporal punishment, punishment by placing in a dark cell, and all cruel, inhuman or degrading punishments shall be completely prohibited as punishments for disciplinary offences.”

b) violation of Article 5 of the Universal Declaration of Human Rights, which states that: “No one shall be subjected to torture or treatment or cruel, inhuman or degrading treatment or punishment.”

3. The policy of administrative detention carried out by the occupying power, in which people are detained based on classified material with no charges against the person, is in deirect violation of the fair trial guarantees provided by the international law:

a) violation of Article 11/1 of the 1948 Universal Declaration of Human Rights, which states that: “Everyone charged with a penal offence has the right to be presumed innocent until proved guilty according to law in a public trial at which he has had all the guarantees necessary for his defence.”

b) serious violation of Articles 9 and 14 of the 1976 International Covenant on Civil and Political Rights, which guarantees every person the right to a fair trial, including the right to be informed of the charges against him and to defend himself.

c) The failure to disclose any charge against a person detained under an administrative detention order preclude the occupying power from claiming that emergency and necessary security reasons have compelled the detention. No such compelling security reasons are demonstrated that reach the level stated in Article 78 of the 1979 Fourth Geneva Convention, requiring that “If the Occupying Power considers it necessary, for imperative reasons of security, to take safety measures concerning protected persons, it may, at the most, subject them to assigned residence or to internment.”

d) the failure to informed the detained person of the charges against him under administrative detention violates Article 71 of the Fourth Geneva Convention, which obligates the occupying power to report such charges without delay. It is alao a violation of principle 10 of the 1988 Body of Principles for the Protection of All Persons under Any Form of Detention or Imprisonment.