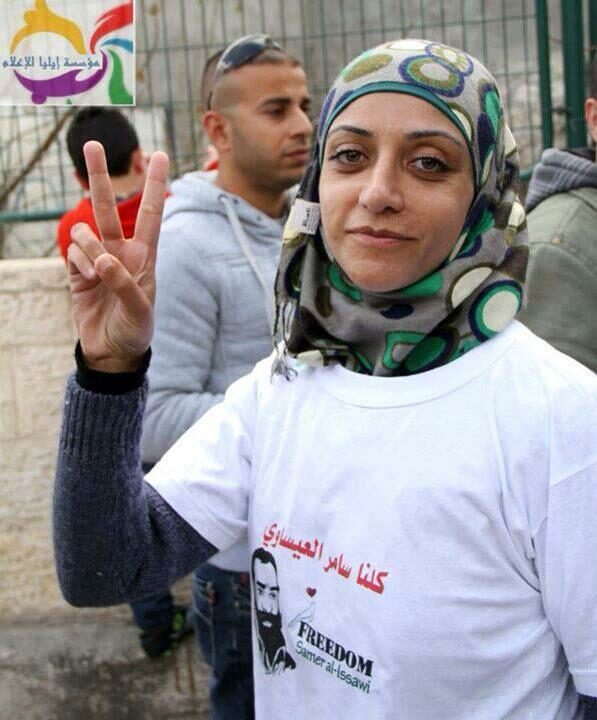 Imprisoned Palestinian lawyer and prisoners’ advocate Shireen Issawi has been released from solitary confinement and will be returned to HaSharon prison in the coming days, reported the Palestinian Prisoners’ Affairs Commission on Thursday, 27 July. Issawi has been held in solitary confinement for over one month in the Jalameh/Kishon interrogation center since she and other prisoners were assaulted by Israeli occupation guards in Damon prison on 22 June.

Issawi is imprisoned alongside two of her brothers. Medhat, who was tried with her in the same case for providing funds to Palestinian prisoners from their families. Samer, a re-arrested former prisoner released in the 2011 Wafa al-Ahrar exchange and a former long-term hunger striker, is one of approximately 60 released prisoners whose original sentences has been reimposed. Shireen Issawi was a highly visible international spokesperson during Samer’s hunger strike and the leader of the campaign to free Samer Issawi.

Following the violent raid on Palestinian women prisoners in Damon, Issawi was fined 700 shekels, banned from family visits for a month and denied access to the canteen (prison store). She had declared that she would launch a hunger strike if her solitary confinement was not immediately ended, and told lawyer Hanan al-Khatib that she was subject to surveillance cameras inside her cell, the blocking of the cell window and racist slurs from prison guards in isolation in Jalameh.

On Friday, 28 July, protests in London were organized by Inminds to demand freedom for Issawi and her fellow Palestinian prisoners, highlighting her lengthy solitary confinement and her imprisonment for the purpose of suppressing advocacy for imprisoned Palestinians.

Issawi is one of approximately 60 Palestinian women and minor girls imprisoned by the Israeli occupation, mostly held in HaSharon and Damon prisons. They include prominent political leaders Khalida Jarrar and Khitam Saafin as well as Jerusalemite teens Tamara Abu Laban, 16, and Alaa Ruweidi, 16, both detained last week for posting on social media about the uprising in Jerusalem. The teens’ detention was extended until Tuesday, 1 August.

In addition, on 26 July, Israeli occupation forces seized Dr. Sabreen Abu Sharar, 29, from her home in Dura near al-Khalil, only eight months after her release from Israeli prison. She was detained for 18 months and was the representative of the Palestinian women prisoners in Damon prison.

A medical doctor engaged to a fellow doctor from Gaza working in the United States, she was told on Wednesday, 26 July that she would receive a decision within 48 hours about a permit to travel to unite with her fiance. Former prisoner Haifa Abu Sbeih told the Asra Media Office that the arrest was the answer Sabreen received. Abu Sbeih said that she expects that Abu Sharar will join several other Palestinian women in being held without charge or trial under administrative detention.

Meanwhile, the Ofer military court ordered the release of Ibtisam al-Abed, the mother of prisoner Omar al-Abed, who carried out an attack on the illegal occupation settlement of Halamesh last week. Al-Abed was seized from her village of Kobar near Ramallah and accused of “incitement” for her public statements about her son; she paid a 10,000 NIS bail ($2809 USD) in order to secure her release.