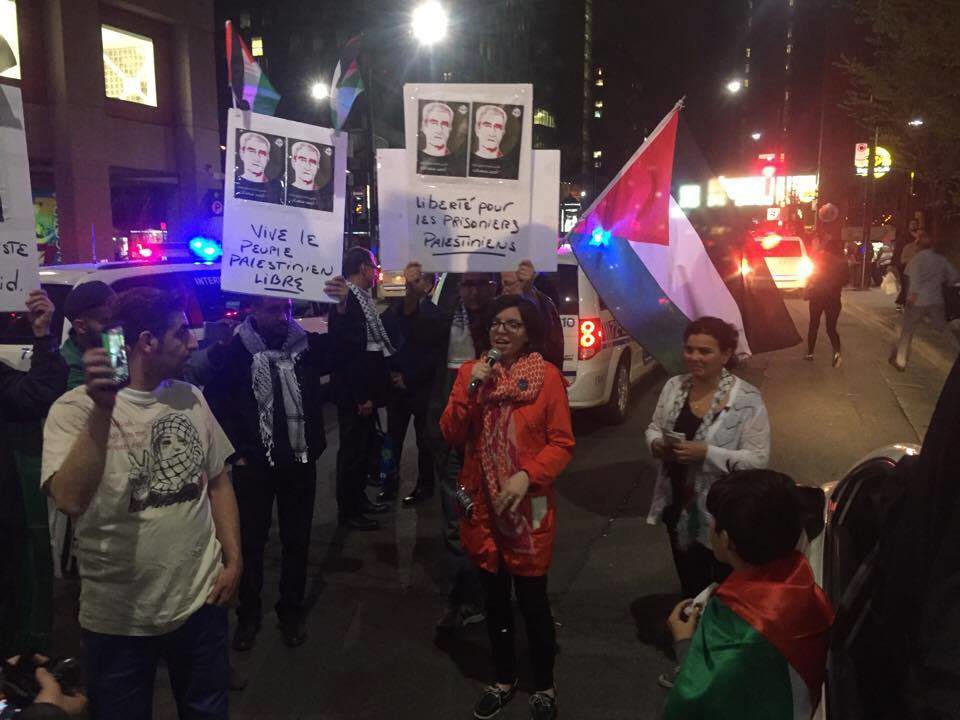 Many Canadian progressive and social justice organizers have expressed support for the leadership campaign of Niki Ashton in the New Democratic Party, particularly in relation to her expressed support for Palestinian rights. Ashton, a Member of Parliament from Manitoba, came under attack from Zionist organizations, including B’nai Brith Canada, for her participation in a rally in commemoration of the Nakba and in support of Palestinian political prisoners on hunger strike in May 2017.

In particular, right-wing Zionist organizations attacked Ashton for speaking in front of a sign urging freedom for imprisoned Palestinian leader Ahmad Sa’adat, the General Secretaty of the Popular Front for the Liberation of Palestine. Following the attacks, rather than backing down, Ashton reiterated her support for Palestinian rights and noted that it was “powerful to join many at a rally in solidarity with those on hunger strike in Palestine.”

While the NDP is known as the more progressive major party in Canadian politics, it has, in particular in recent years, participated in the broad Canadian ruling-class political support for Israeli occupation and apartheid. While NDP parliamentarians have taken a stand against attempts to ban campaigning for BDS, party officials have also joined in denunciations of Israeli Apartheid Week events, the global week of campus organizing that began over a decade ago in Toronto, and BDS organizing.

In 2005, candidates were purged from the parliamentary nominations list for their support for Palestinian rights. Ashton denounced this action, noting in an interview that “I am the only candidate in the leadership race that has identified what our party did to those that ran for us but then were treated so poorly because of their stance on Palestine. It’s totally unacceptable. We obviously, of course, shouldn’t have people who don’t share our values running for our party– However, justice for Palestine and all oppressed people IS one of our values.”

Ashton, however, has found wide support among progressive youth, not only for her support for Palestine but for her broadly leftist positions within the party on labor issues, the environment, the Black Lives Matter movement and Indigenous struggles. Ashton denounced actions to remove the term “socialism” from the NDP’s constitution.  Groups like Students Against Israeli Apartheid at York University and the Palestine Aid Society have expressed support officially for Ashton’s candidacy.

“We’ve called for things like free education. We’ve called for things like public ownership and nationalization. That means not only opposing privatization, but proposing public ownership. In terms of the environmental front, we’ve talked about the need to stand up to big oil and oppose pipelines. We’ve talked about indigenous justice and moving towards a carbon free economy,” said Ashton.

Ashton has significant support in the leadership elections, with polling showing her support hovering at around 20 percent, around 2 percentage points below the top-polling candidate, Charlie Angus.  She has strongly denounced racist profiling and policing, demanding an end to the practice of “carding,” the repeal of Bill C-51, and noting that “racial targeting in our police system is the result of centuries of colonization and systemic racism.”

17 August marks the last day for Canadians to join the NDP in order to participate in the upcoming leadership election, and many organizers who have left the party in the past have rejoined in order to support Ashton’s bid.

In 2016, advocates for Palestinian rights won a major victory in Canada’s Green Party, whose convention endorsed the boycott, divestment and sanctions (BDS) campaign in August of that year.  Unfortunately, party leaders joined Zionist organizations in crusading against the measure; however, while the policy itself was changed in December, the Green Party’s final resolution did uphold Palestinian rights.

This comes amid an ongoing, relentlessly pro-Zionist policy pursued by the Liberal government under Justin Trudeau, continuing the policy of Conservative Stephen Harper.  Of course, Canadian support for Israeli occupation didn’t begin with Harper, of course.  It dates back to the Balfour Declaration and Lester Pearson’s recommendation to the United Nations to create the Israeli state. This role has always been distinctly related to the Canadian state’s own settler colonial nature, based on the dispossession and genocide of Indigenous peoples that continues to the present day.