Events and actions around the world demanded the freedom of Georges Ibrahim Abdallah as part of a global week of action from 14 to 24 October, as the imprisoned struggler entered his 34th year in French prisons as part of the International Week of Action to Free Georges Abdallah.

Abdallah has been imprisoned by the French state since 24 October 1984, when he was accused of carrying false documents. Throughout his life, he has been committed to the revolutionary struggle in Lebanon and the liberation of Palestine. He was involved with the Palestinian leftist organization, the Popular Front for the Liberation of Palestine, resisting Israeli attacks on Lebanon. Later, he joined other Lebanese revolutionary leftists in the Lebanese Armed Revolutionary Factions.

His detention was repeatedly extended as French intelligence searched for information to charge him with involvement in armed actions that killed a U.S. military attache and an Israeli representative in Paris. Even one of his lawyers was reportedly involved in spying on Abdallah for the French intelligence agency. While he was supposed to be exchanged with prisoners held by Arab revolutionaries, the French state reneged on the deal.

In 1987, when Georges Abdallah was sentenced, he was expected to receive a lengthy sentence of ten years or less – as recommended by the prosecutor in his case. Instead, he received a life sentence, as argued for by a private lawyer representing the U.S. government.

Today, Georges Abdallah remains behind bars. Despite being eligible for release since 1999, his parole applications have been denied repeatedly. French and even U.S. officials have intervened at the highest levels to block his release. From behind prison walls, he remains an active struggler, writing letters and refusing meals to support revolutionary struggles around the world, including Palestinian hunger strikers in Israeli prisons.

The week of action was called for by Samidoun and involved numerous international events and actions in cities and locations around the world, unified in their message of freedom and liberation for Georges Abdallah and for Palestine. 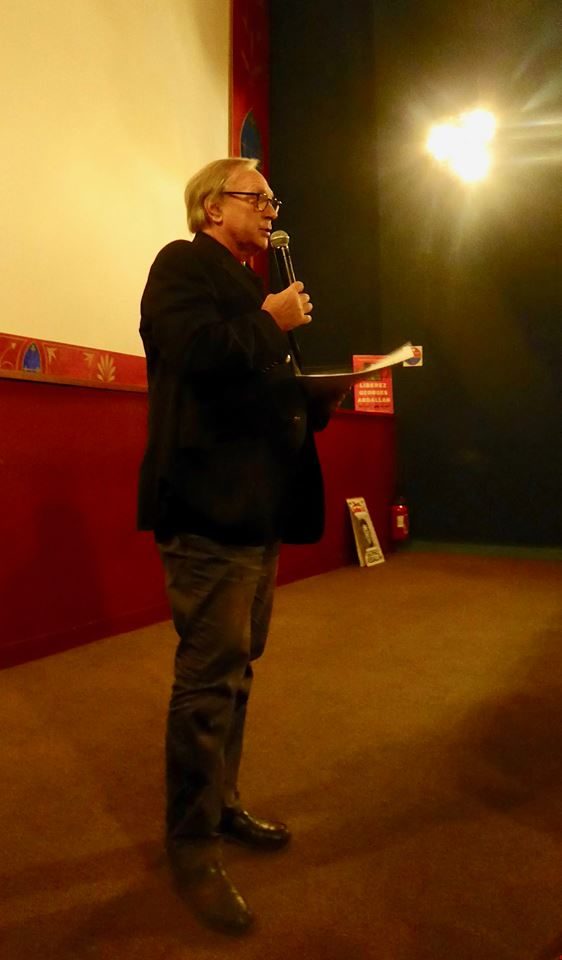 The Days of Action began with two events in Bordeaux, France, a screening of Mai Masri’s feature film “3000 Nights,” about Palestinian women prisoners in Israeli jails and a meal and discussion with Jacques-Marie Bourget. Organized by the Collectif Liberons Georges 33, the events also helped to raise money to support the Bordeaux bus to the national Lannemezan demonstration on 21 October.

The next event for the Week of Action was an action by the Greek Front of Resistance and Solidarity for Palestine “Ghassan Kanafani”, who raised a banner to free Georges Abdallah on Saturday, 14 October at the football game between Atromitos and Asteras Tripolis at a central spot beside the Atromitos fans.

Samidoun organized the first of two protests in the city on Monday, 16 October, outside the French Mission to the United Nations. Protesters carried placards, chanted and distributed hundreds of leaflets with information on the case of Georges Abdallah as well as the Israeli imprisonment of French-Palestinian lawyer Salah Hamouri without charge or trial. 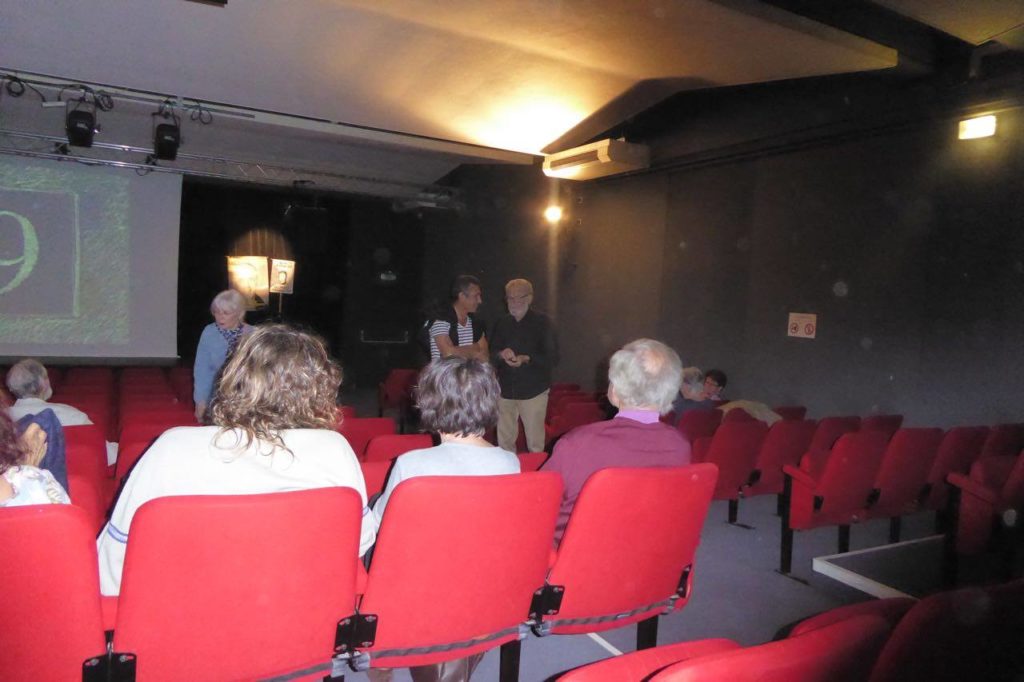 In Villeneuve, supporters of Georges Abdallah marked the Week of Action on 17 October with a screening of “After War is Always War,” a film directed by Samir Abdallah, followed by a discussion about Georges Abdallah, Salah Hamouri and the Palestinian struggle.

Fight Racism! Fight Imperialism! and other student organizations at the University of Manchester protested and held an information table on 18 October in solidarity with Georges Abdallah and Palestinian prisoners in Israeli jails. The event also came as part of the run-up to a large protest on 31 October against a celebration of the Balfour Declaration officially sponsored by the University. 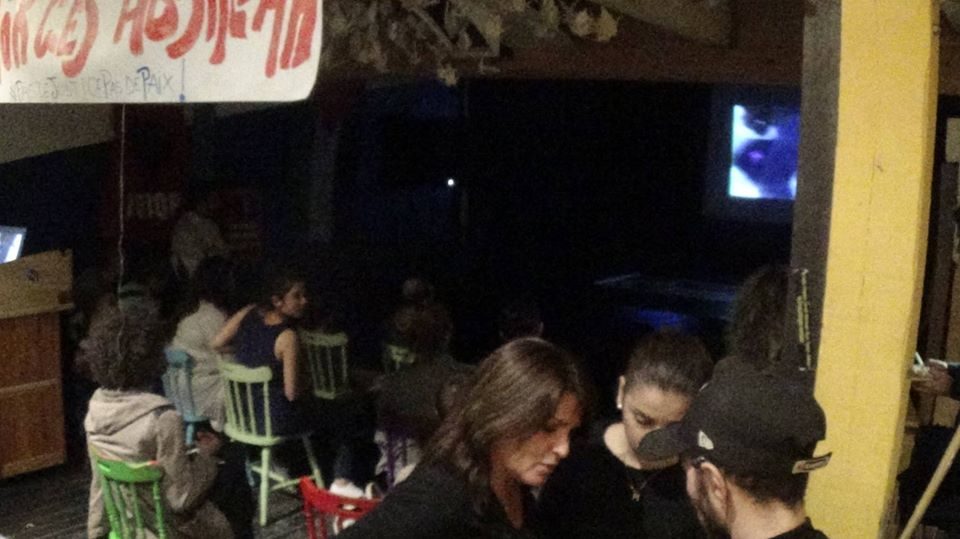 Dar Lamifa in Marseille organized an event on 19 October that formed a collective commemoration of the imprisonment of Georges Abdallah and the massacre of 17 October 1961, when hundreds of Algerians in Paris were killed by French police when they protested for Algerian independence. The event also helped to mobilize and support the Marseille group traveling to Lannemezan.

Studenten voor Rechtvardigheid en Palestine (Students for Justice in Palestine) in the Netherlands organized a protest on 20 October in The Hague with signs, leaflets and chants to demand freedom for Georges Ibrahim Abdallah, Salah Hamouri and all Palestinian prisoners. 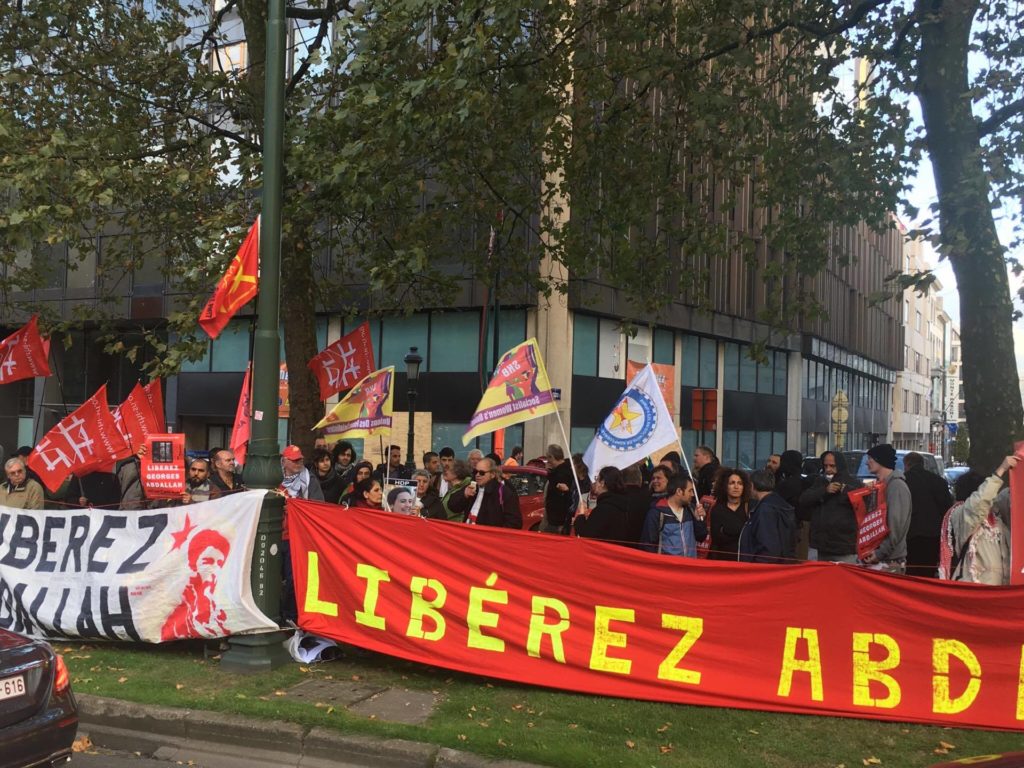 Over 100 people joined a demonstration organized by Secours Rouge on 20 October across from the French Embassy in Brussels. Participants included Secours Rouge organizers, Samidoun members and Palestinian community organizers as well as participants in a number of left and anti-colonial organizations. The outdoor protest was followed by a solidarity evening for Georges Abdallah and other political prisoners, organized by Secours Rouge. 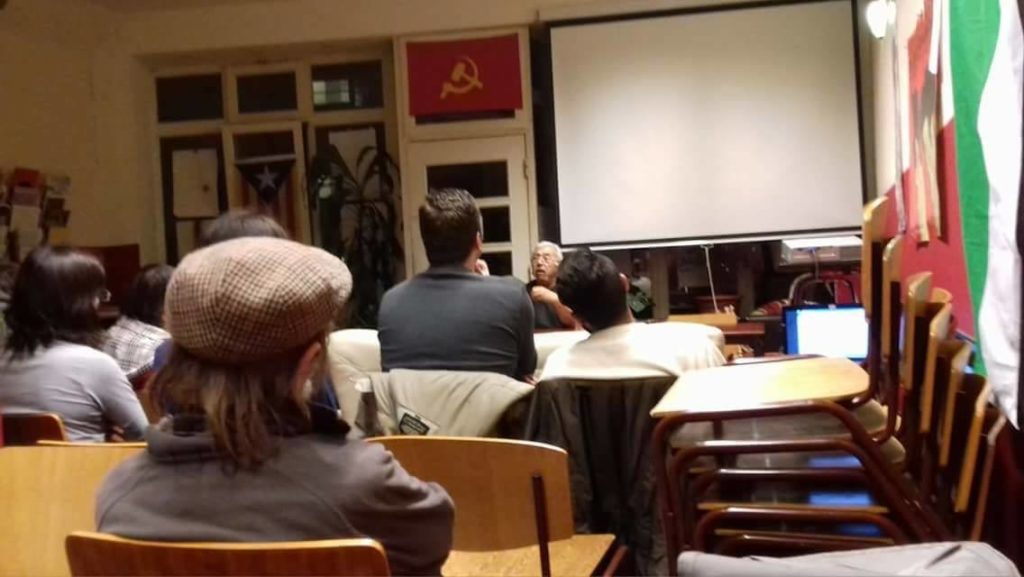 The Bündnis gegen imperialistische Aggression organized a film screening and discussion in Saint-Pauli on 20 October in support of Georges Abdallah. Local activists from the Palestinian community joined the screening as well as anti-imperialist organizers. 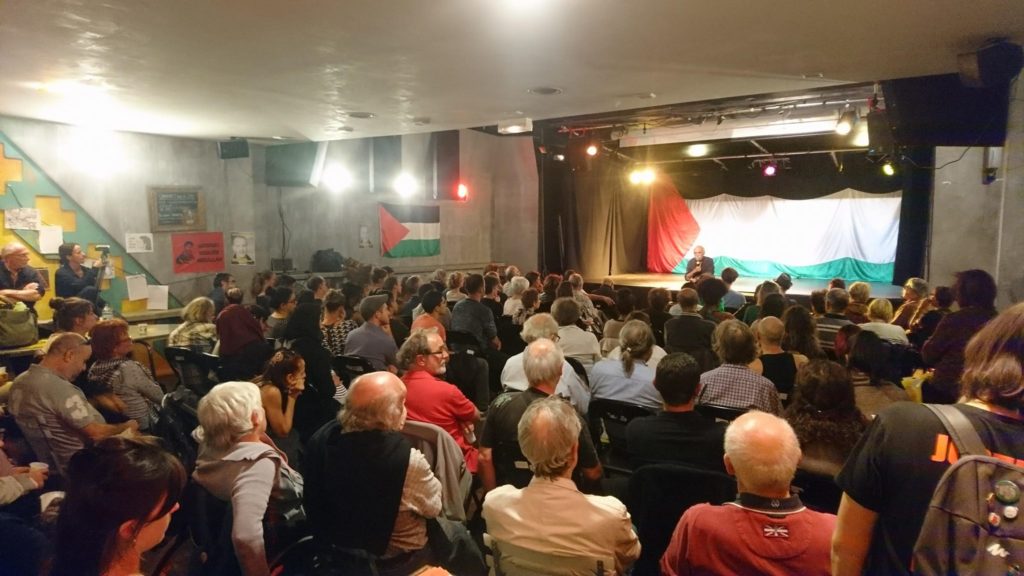 A large event brought out over 160 people in Toulouse on the eve of the mass march in Lannemezan, organized by the Comité de Soutien aux InculpéEs BDS (Committee to Support the Accused BDS Activists). The event included a screening of the Secours Rouge film on Georges Abdallah as well as a speech by Michel Warschawski, journalist, writer and co-founder of the Alternative Information Center. The event was followed by a Palestinian meal and concert.

The next morning, a bus from Toulouse organized by Coup Pour Coup 31 headed off to Lannemezan, packed full of participants in the national demonstration. 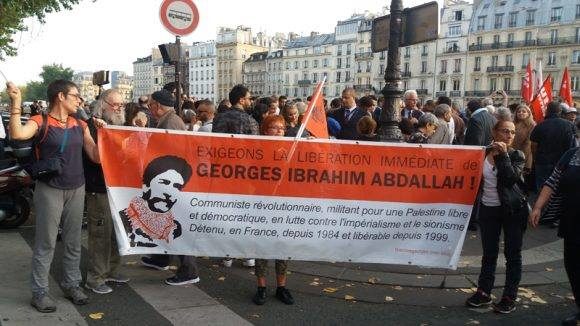 A bus organized by the Unified Campaign to Free Georges Abdallah travelled from 20 October to arrive in Lannemezan on 21 October. This followed multiple mobilizations throughout the week, including the commemoration of 17 October 1961, with the participation of campaigners for Georges Abdallah. 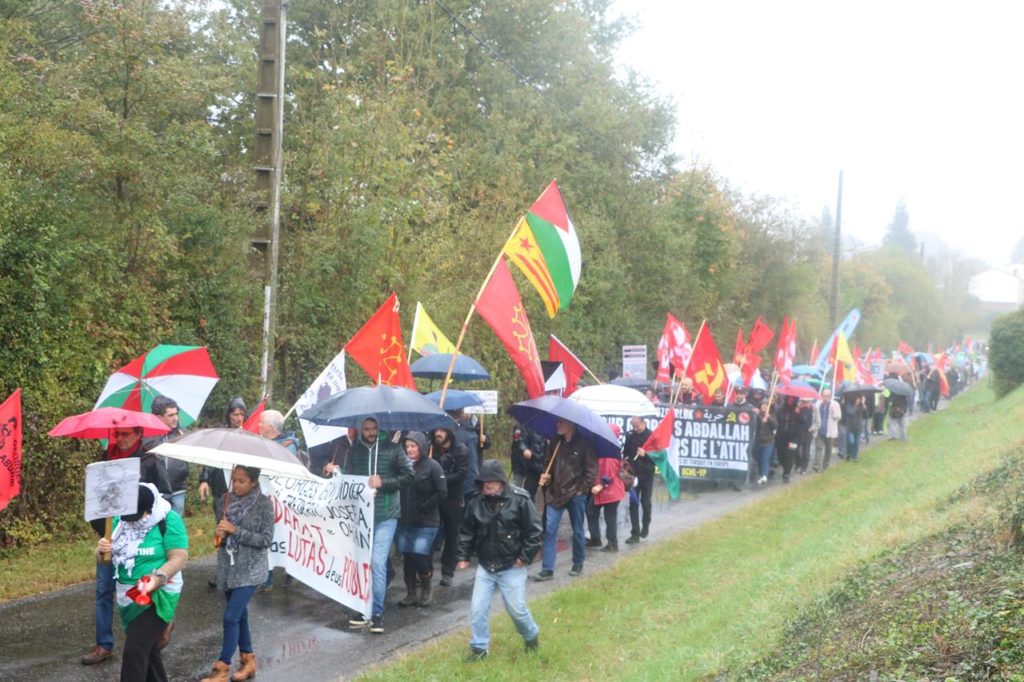 Despite pouring rain, over 400 people marched from the Lannemezan train station toward the prison where Georges Ibrahim Abdallah on 21 October, chanting and carrying signs and banners beneath umbrellas. They declared solidarity with the Palestinian struggle, the Palestinian prisoners, Abdallah and all revolutionary prisoners. Dozens of organizations joined the mobilization, with buses coming from Toulouse, Bordeaux, Paris and elsewhere. Georges Abdallah sent a statement to the demonstration and representatives of numerous organizations spoke at the event, urging even greater mobilization to make this year the one in which Georges Abdallah wins his freedom. 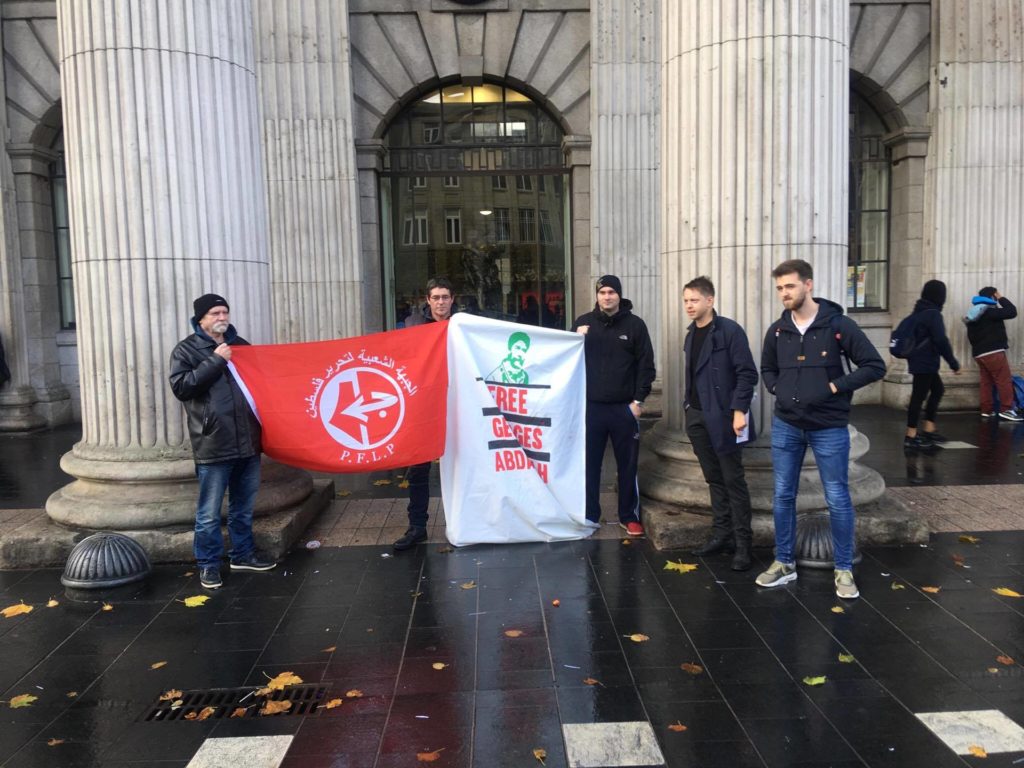 Irish republican socialists gathered in the rain in Dublin on 21 October to urge freedom for Georges Abdallah and Palestinian prisoners. Despite cold, wet weather, they distributed hundreds of leaflets to passers-by and discussed the case and the struggle of the Palestinian prisoners with a number of people. 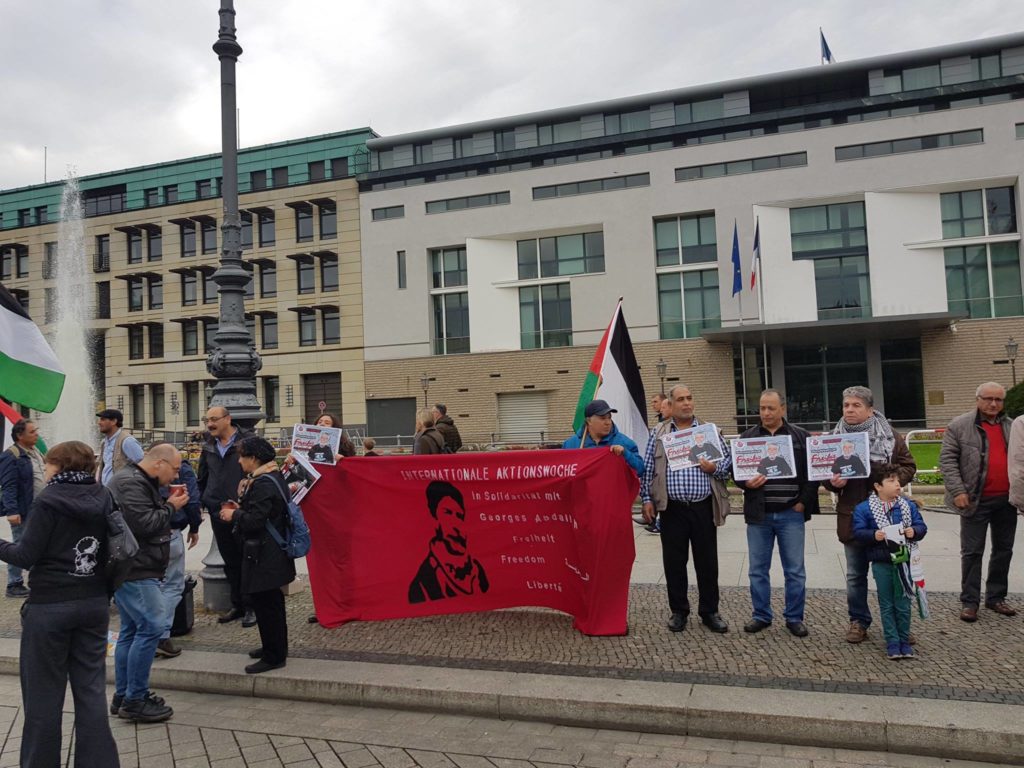 The Democratic Palestine Committees in Berlin organized a protest as part of the Week of Action on 21 October, outside the French embassy in Berlin. Carrying signs, banners and Palestinian flags, they demanded freedom for Georges Abdallah, Ahmad Sa’adat and all prisoners of the Palestinian struggle in Israeli and international jails.

Activists in Lyon organized a boxing demonstration gala on 21 October in support of Georges Abdallah, but it was prohibited by the local police under the pretext that boxing matches must be authorized – despite the fact that the match was not a real boxing match but only a demonstration. The organizers, including Dar Harraga and the Comite Lyon sud/est for the Liberation of Georges Abdallah noted that by the police ban on the event and ensuing coverage of the repression, many more people had learned of the struggle of Georges Abdallah. 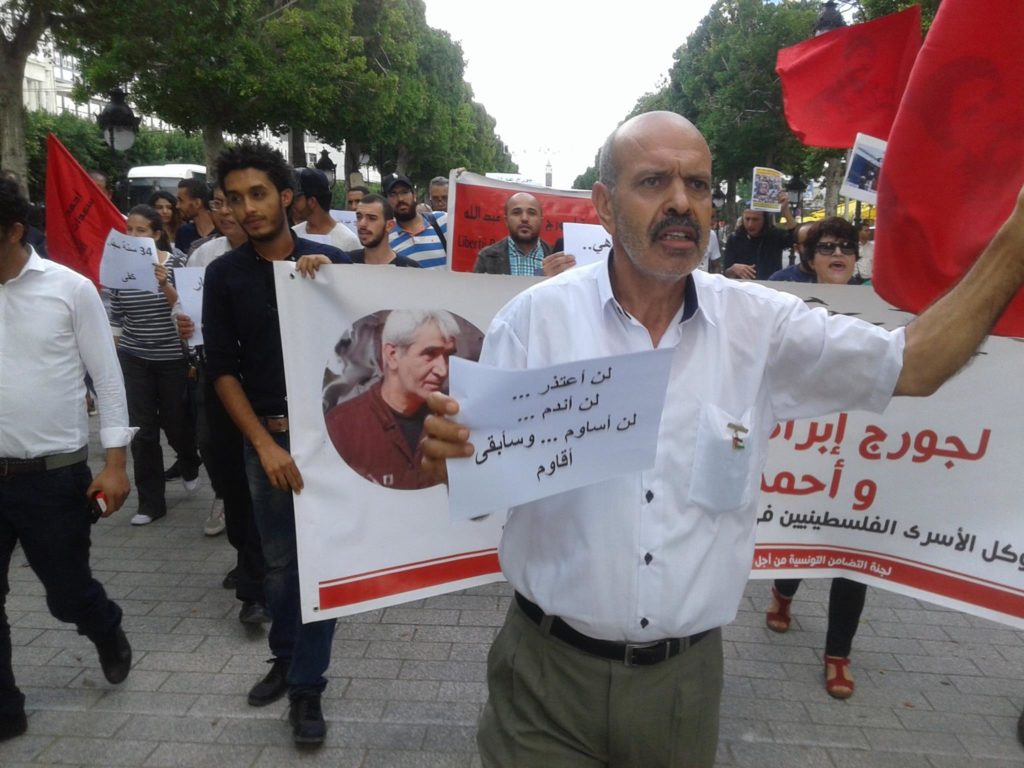 The Tunisian Committee for the Liberation of Georges Abdallah organized a protest on Saturday, 21 October. Activists gathered on Habib Bourguiba street to march to the French embassy, led by a banner with images of Georges Abdallah and Ahmad Sa’adat. Tunisian activists spoke and protested, demanding Abdallah’s freedom.

The Campaign to Free Georges Abdallah organized an evening event in Baalbek, Lebanon to demand freedom for Georges Abdallah on 21 October at the Martyr Basil al-Asad Cultural Center. The event included cultural performances and music in solidarity with Abdallah. 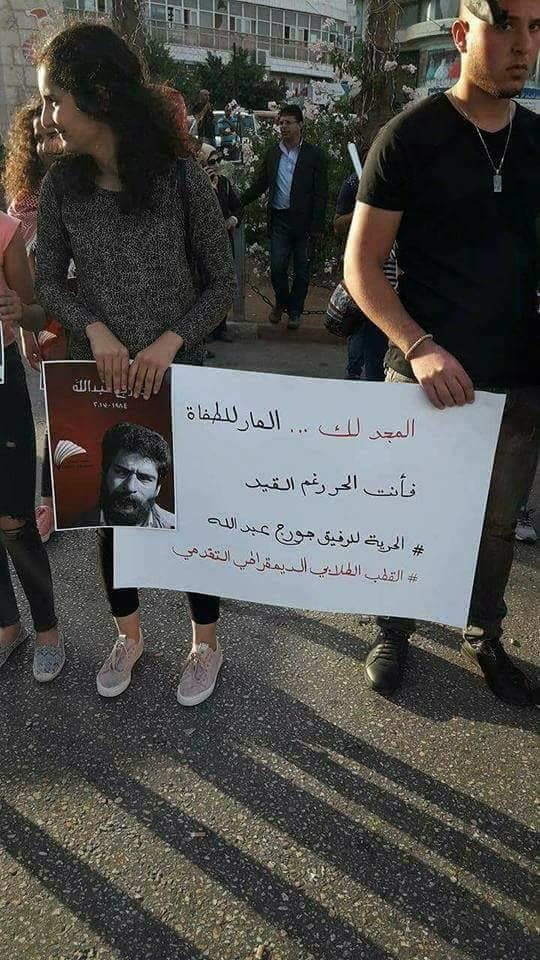 The Progressive Democratic Student Pole at Bir Zeit University organized a rally in Manara Square in the center of Ramallah on 21 October. The student organizers carried signs and chanted, emphasizing Georges Abdallah’s position as a prisoner of the Palestinian liberation struggle in French jails. 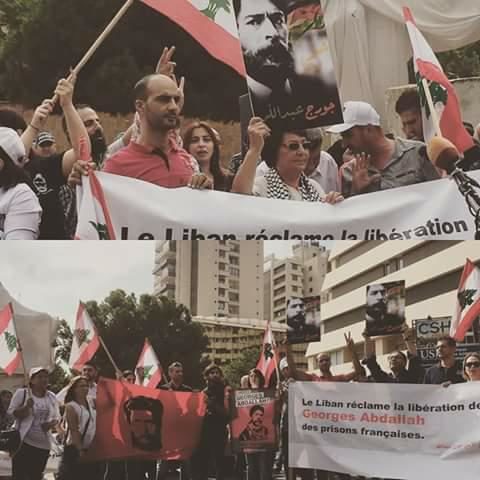 Palestinian resistance icon and leader in the Popular Front for the Liberation of Palestine Leila Khaled joined the Campaign to Free Georges Abdallah for a demonstration outside the French embassy in Lebanon on 22 October, demanding Abdallah’s immediate release and return to Lebanon. The protesters also demanded the Lebanese government to take real action to see Abdallah, a Lebanese citizen, returned from France.

Samidoun activists returned to the streets on 23 October in New York City, where they protested outside the French Consulate with signs and leaflets about Georges Ibrahim Abdallah and Salah Hamouri. They distributed numerous leaflets to passers-by, chanting and waving Palestinian flags, urging freedom for all political prisoners. 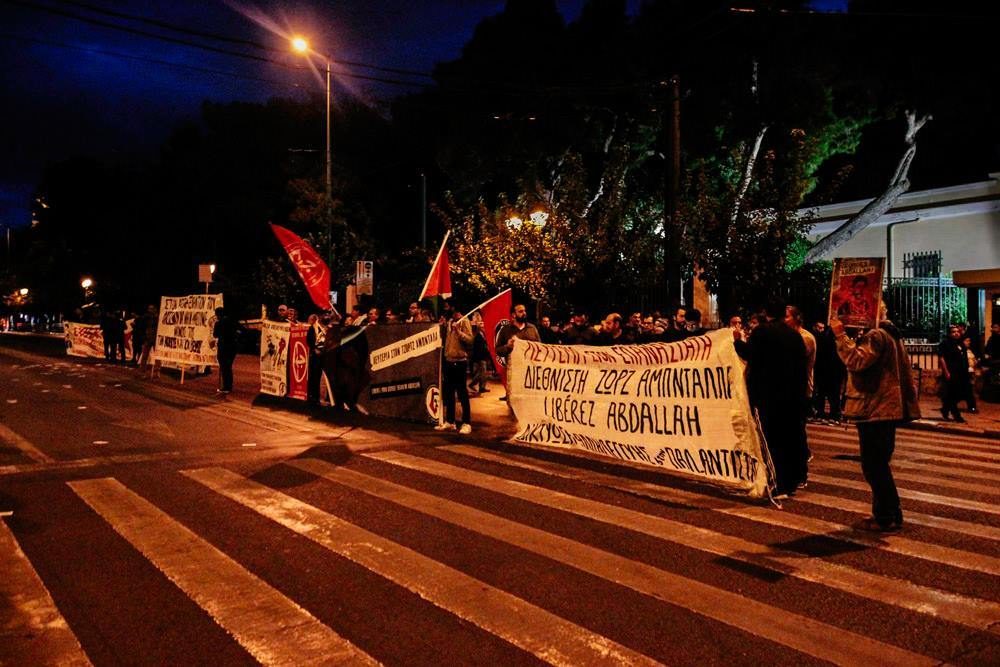 The Greek Front for Resistance and Solidarity with Palestine “Ghassan Kanafani” organized a protest in Athens on 24 October, outside the French Embassy to Greece. Numerous organizers from a number of groups and Palestinian activists joined the protest with signs, banners and demands for the immediate freedom of Georges Abdallah. 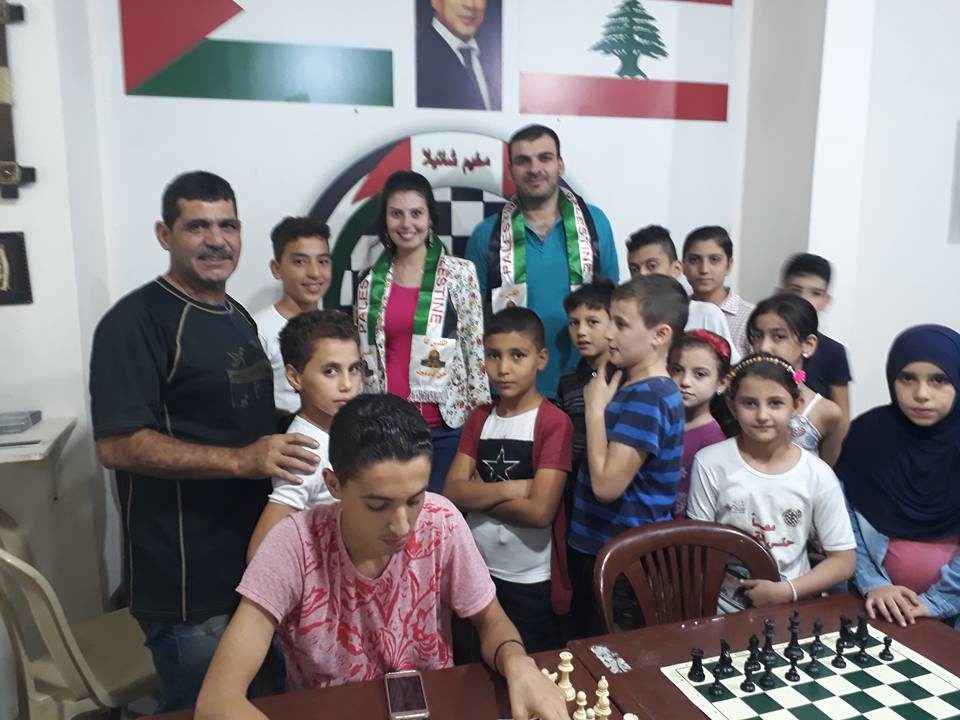 The Palestinian Chess Forum organized an event on Palestine in the Heart of Georges Abdallah in Shatila refugee camp in Lebanon on 27 October, including a presentation by lawyer Fidaa Abdel-Fattah about the case. This followed an earlier children’s chess tournament in solidarity with Georges Abdallah in the camp organized by the Forum on 22 October.

These events were accompanied by other actions and visual displays in solidarity with Georges Abdallah internationally during the week. Graffiti demanding the release of Abdallah appeared on the facade of BNP-Paribas bank in Brussels. 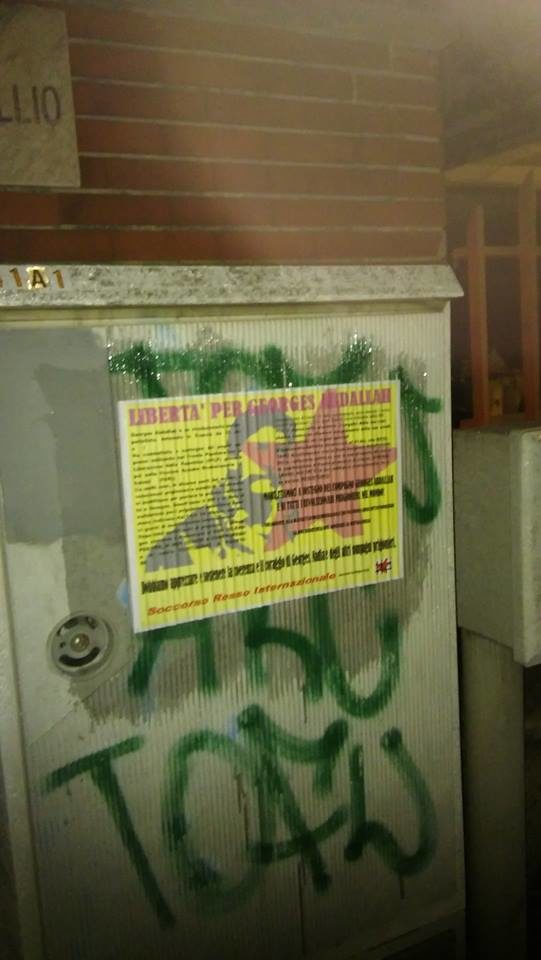 In Turin and Milan, activists put up posters around the city in solidarity with Abdallah. Videos of support also came from resistance organizations, such as the Abu Ali Mustafa Brigades in Palestine and TIKKO Rojava.  Activists gathered in Barcelona, Valencia, Zaragoza and elsewhere to express their solidarity with group photos, videos and other actions. 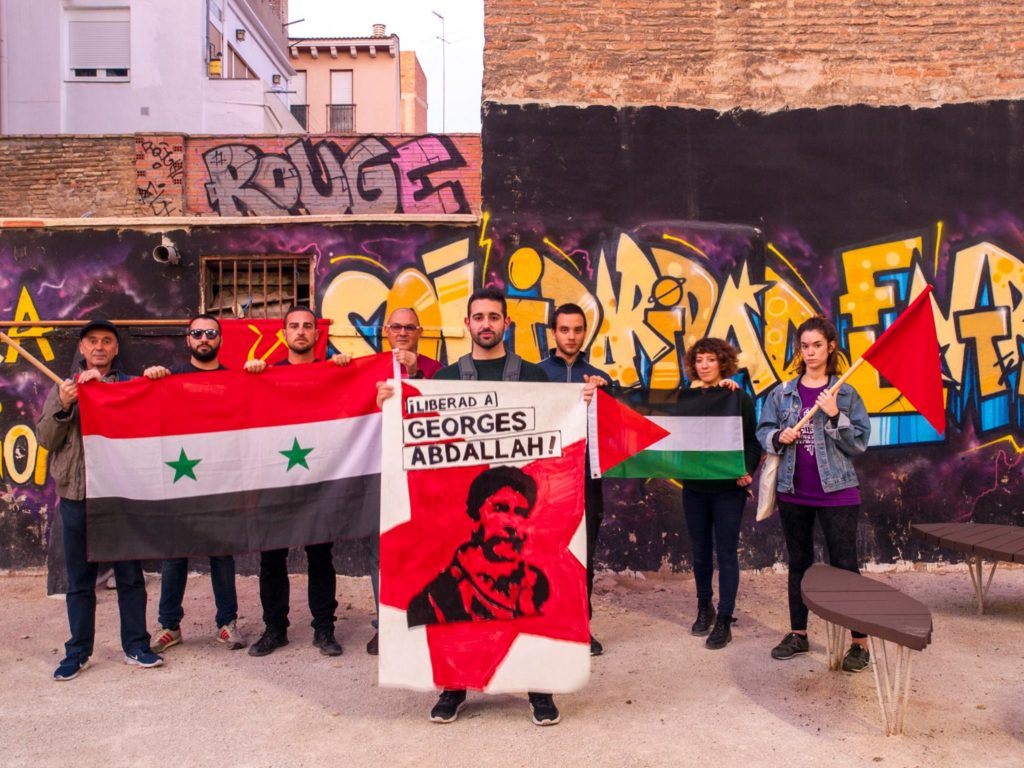 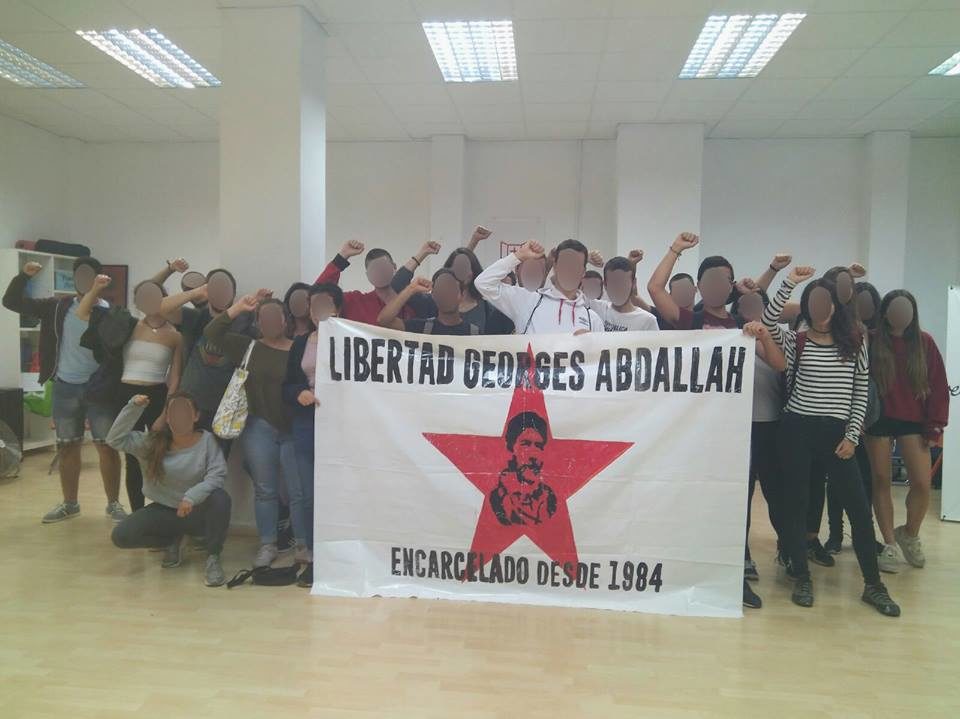 In Geneva, activists gathered outside the French embassy in a night-time mobilization to demand freedom for Georges Abdallah. 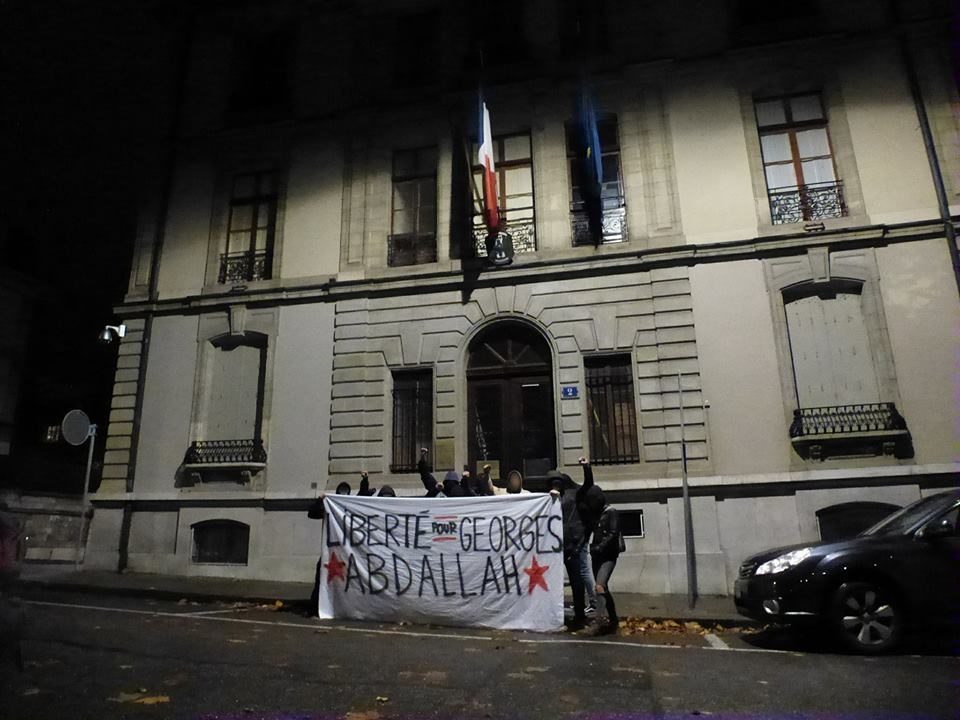 In Gaza, Palestinians expressed their solidarity with a video campaign urging solidarity with Abdallah as part of the Palestinian cause. In Belgium, 200 supporters and 30 organizations joined a new Belgian call for the release of Abdallah, including a number of Palestinian, solidarity and social justice movements. Graffiti appeared on the streets of Zurich urging Abdallah’s release. 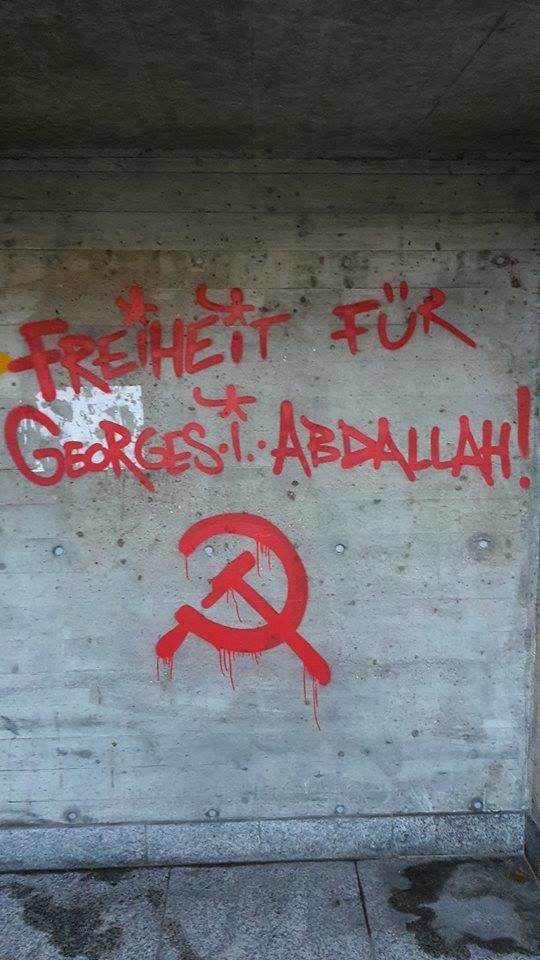 At the weekend meeting of BDS France in Saint-Etienne, demands for freedom for Georges Abdallah and Salah Hamouri were a focus. 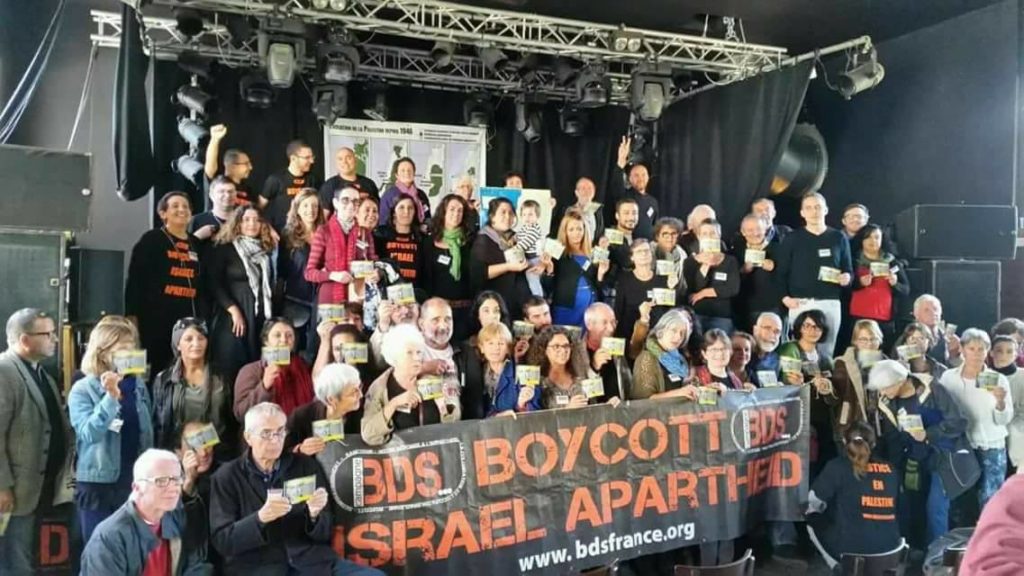 In Hortaleza, an anti-racist, anti-fascist soccer tournament also urged liberation for Georges Abdallah.  And in Nanterre, a commemoration of the 17 October massacre also included solidarity calls for Abdallah’s freedom. 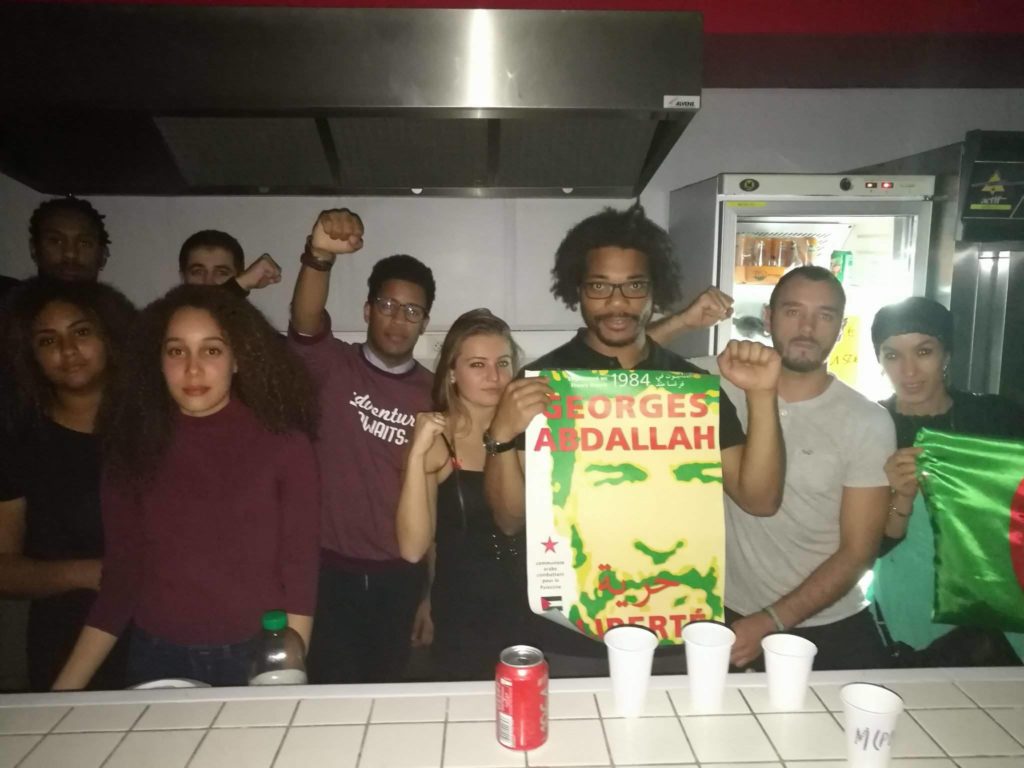 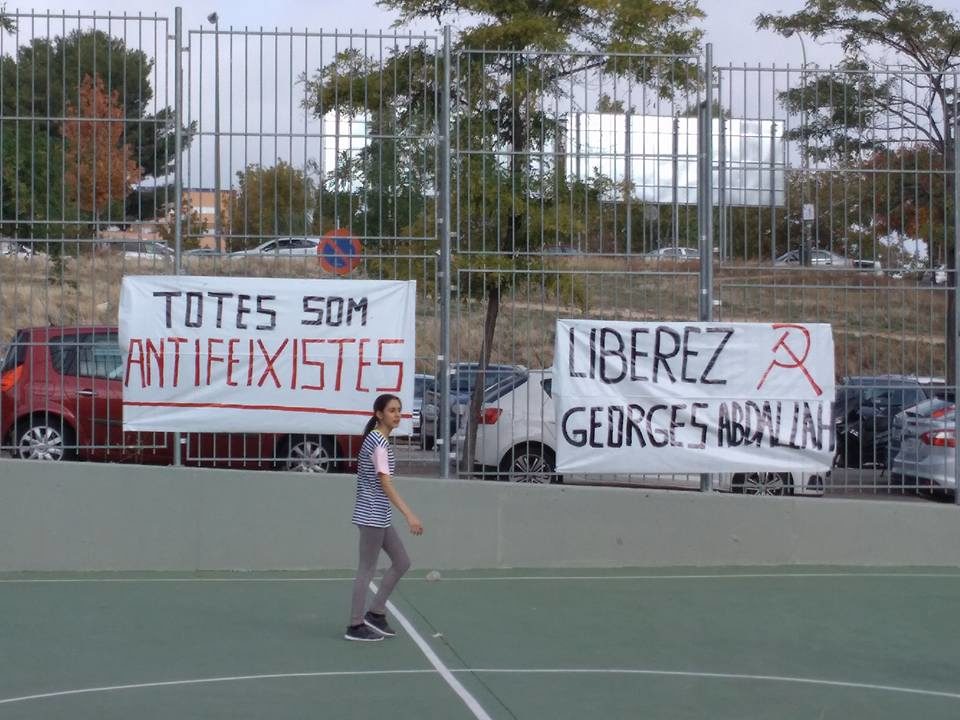 Samidoun Palestinian Prisoner Solidarity Network thanks and salutes all of the organizations, groups, activists and strugglers that organized events and actions around the world to demand freedom for Georges Abdallah, the imprisoned struggler, and his fellow prisoners of the Palestinian struggle. These events have all helped to contribute to a growing demand and movement to free Abdallah and free Palestinian prisoners as an inexorable and essential component of the struggle for a free Palestine and a free humanity. The challenge now is to all of us to escalate and advance our organizing so that next year we are celebrating the release of Georges Abdallah and not one more year behind the bars of a French prison.

Freedom for all Palestinian prisoners!

Freedom for all political prisoners!