New Yorkers protested on Monday, 13 November for the release of hunger-striking Palestinian prisoners in Israeli jails held without charge or trial. The protesters also urged shoppers to boycott HP (Hewlett-Packard) consumer products because of HP’s ongoing contracts with Israeli occupation prison system, military and other systems of apartheid and colonization in Palestine.

Organized by Samidoun Palestinian Prisoner Solidarity Network, the protest took place in front of the Best Buy electronics store in Manhattan’s Union Square. Protesters carried signs and distributed information about Palestinian prisoners on hunger strike. At the time, four prisoners, Hamza Bouzia, Hassan Shokeh, Bajis Nakhleh and Salah Khawaja, were on hunger strike against their imprisonment without charge or trial. Currently, Bouzia and Khawaja are still on hunger strike to demand their freedom from administrative detention.

The protest came as part of the growing global boycott campaign against HP. HP corporations profit from the Israeli apartheid wall and checkpoint system that imprisons Palestinians and separates them from their land as well as the identity card system used to impose apartheid on Palestinians throughout occupied Palestine. It maintains contracts for database management with the Israel Prison Service imprisoning Palestinian political prisoners and even the Israeli occupation navy imposing the siege on Gaza. Organizations around the world, including churches and labor unions, are adopting the boycott of HP and declaring themselves “HP-free zones” in protest of the company’s profiteering from the oppression of Palestinians nd colonization of Palestine. 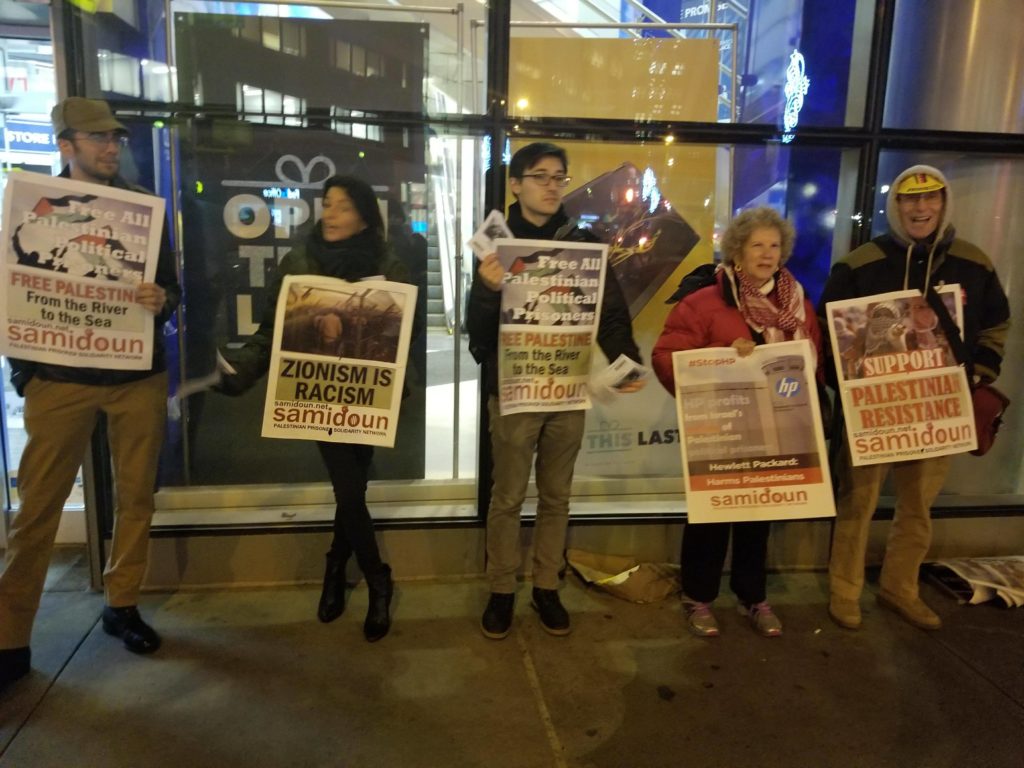 Two Palestinians are continuing on hunger strike today. Hamza Bouzia of Salfit has been on hunger strike since 22 October against his imprisonment without charge or trial, while Salah Khawaja has been on strike for eight days against the renewal of his detention only one day before he was to be released. They are among 450 Palestinians – out of a total of 6200 Palestinian political prisoners in Israeli jails – imprisoned without charge or trial under indefinitely renewable administrative detention orders. Palestinians have spent years at a time jailed under these orders.

Samidoun also participated in the Workers World Party’s national conference over the weekend of 18 and 19 November, marking the 100th anniversary of the Bolshevik revolution. Samidoun delivered a statement to the conference in solidarity and standing with Palestinian prisoners. The conference also received a statement from the Popular Front for the Liberation of Palestine, as well as solidarity messages from movements in the United States and international revolutionary parties from the Philippines to Greece to Puerto Rico and Cuba.

.@SamidounPP with a #Palestine #poem by Mahmoud Darwish #FreePalestine pic.twitter.com/I0tVqwpcx9

New York Samidoun activists are organizing another protest to free the Palestinian prisoners and support the hunger strikers on Monday, 20 November at 5:00 pm outside the Best Buy electronics store in Union Square in Manhattan. All supporters of Palestine and the Palestinian people are encouraged to attend to spread the word about the HP boycott, especially as the holiday shopping season approaches.