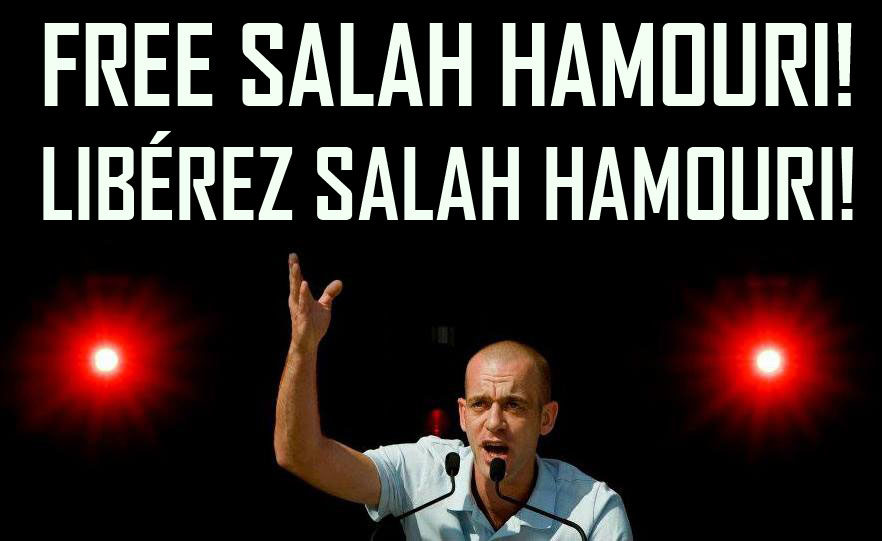 The Committee to Support Salah Hamouri released a letter from the imprisoned Palestinian-French lawyer and human rights defender detained by the Israeli occupation without charge or trial since 23 August 2017. Written in the Negev prison, Hamouri’s letter greets his supporters in France and around the world.

Hamouri is a former prisoner whose case became widely known throughout France; after his release in the 2011 Wafa al-Ahrar agreement several months before his sentence was scheduled to end, he spoke throughout France about the struggle of Palestinian prisoners. He studied law in order to become a defender of Palestinian prisoners, and works as a field researcher for Addameer Prisoner Support and Human Rights Association.

A Jerusalemite Palestinian, he has faced frequent harassment and oppression by Israeli occupation forces, including bans on his entry into the West Bank and the 10-year ban against his wife, Elsa Lefort, entering Palestine after she was detained for several days and deported to France while pregnant despite holding a valid visa.

A growing number of prominent French artists, elected officials, political parties, writers and others have endorsed the campaign to free Salah Hamouri. Dozens of municipal councils have voted to demand his freedom. The Israeli ministry of national security recently announced that seven French mayors, parliamentarians and officials would be denied entry to Palestine for their upcoming delegation because of their support for Hamouri, Marwan Barghouthi, and the BDS movement.

“I felt a strange sensation when, on 23 August, around 4:30 am, if I remember correctly, I was roused from my sleep by loud noises. Someone was outside the door of my apartment and nervously pressed the doorbell repeatedly. I thought I remembered this type of annoyance, but in the first few seconds, I thought it was a dream. I live in a six-story building in East Jerusalem. Each floor has two apartments. The soldiers and their commander did not know exactly which apartment in which I was living, so they banged brutally at each door. Then I had a thought for my neighbors, all awakened for a full night by soldiers terrorizing every family, I could hear children crying.

“The soldiers did not stop to knock on my door until I finally opened it, still numb with sleep. The first soldier I saw wore a hood. I could see that his eyes were filled with hatred. He yelled at me, asking me for my ID. After verification, these soldiers called for reinforcements, shouting that they had found the person they were looking for. The minute I realized that the occupying force was coming here for me, my brain sent me a clear order: ‘A new battle is beginning for you now, this enemy does not defeat you for even a second.’ They forced me to sit on a chair and three soldiers surrounded me, their guns pointed at me. During that time, their colleagues searched the apartment, overturning furniture, books, clothes … I felt feverish, they got upset, they found nothing of what they were looking for in this apartment. The commander finally gave the order to exit. They then ordered me to get dressed to go with them. Walking toward my apartment front door, before leaving for a term that was unknown to me, I stared at the picture of my son on the wall. In his eyes, I drew the strength to face the tough times ahead of me. I imagined him telling me, ‘Dad, be strong, we will soon be together, all three of us.’ I promised him then to stay strong and never give an opportunity to the occupation to forfeit our humanity and destroy our life as it is bent on doing. They then blindfolded my eyes and led me to an armored car. The march to this new destiny began. A painful march towards a world I know only too well. A world in which we have to stay strong and keep our human smile under any circumstance. Once again, I found in this armored vehicle the darkest and most miserable place for a human being: a prison of the occupier.

“Arriving in the Negev jail after two weeks in the interrogation center, everything seemed depressingly familiar. I walked into Section 24, and I quickly recognized the faces I had left a few years ago. I did not know what to say, I was suddenly impressed to find them here. Some of them have been behind bars for more than fifteen years. They questioned me and I did not know what to tell them. ‘What happened, why are you here?’ I did not have the answers to their questions. No more that I could not talk to them about outside – those who have been there for so many years. What do we do for them, while they pay the price of their struggle? When I found them, I wondered if I had done enough to talk about them outside. We then discussed everything. One inmate told me, ‘Oh you’re back, we’ll talk about us in France!’ Then I realized that despite my new deprivation of liberty, I had no doubt that the mobilization would grow in France. This is a real hope for me and for them. I thought about all the people who had struggled during my first incarceration and all those I have met since, in France and Palestine. No doubt they would all again stand together to denounce the injustice that strikes us.

“And with the news that I get in fragments, I know you are even more numerous than last time! Figures whom I deeply appreciate, including elected representatives, citizens and an even greater number of you are all mobilizing to denounce injustice and arbitrary detention and to demand my release.

“I thank you sincerely. I want to tell you that I will be worthy of the support you are giving me. We do not market our freedom even if we sometimes pay a very high price. It is not a question of stubbornness but of dignity and principle, for freedom, that I will never give up. The Palestinian people, like all others, will not live on our knees. And what strength it gives us to know that you also do not intend to give up. This, the occupier does not fully appreciate. I feel it in my heart. And so, even when it rains I can see the sun is coming… “

The campaign to support Salah Hamouri is continuing its active work, inside and outside France. On 15 November, the France Insoumise group and the Communist deputies in the French National Assembly walked out of the hall during the attack on Salah Hamouri promulgated by Meyer Habib and supported by the extreme right, including Front National representative Gilbert Collard.

The campaign noted that Nathalie Loiseau, adjunct minister to the minster for European and Foreign Affairs, urged the rapid release of Salah Hamouri as well as urging that the delegation of French officials and parliamentarians – seven of which were ordered banned by Israel for their support of Palestinian rights – be able to meet with Hamouri.  Over 30 city councils have voted for motions to demand his release.

The Support Committee is organizing events from 27 November to 3 December throughout France to mark the 100th day of Hamouri’s detention; he is imprisoned under a six-mohth, indefinitely renewable administrative detetion order. Actions during the week will include media activities, rallies, events, and group letter-writing to Salah. Hamouri’s wife Elsa Lefort, the coordinator of the support committee, noted that despite hundreds of letters being mailed to Hamouri, he has been deprived of all of them by the Israeli occupation authorities.

1. Sign the appeal to support Salah Hamouri at http://libertepoursalah.fr

2. Organize an action, event or activity between 27 November and 3 December to mark the 100th day of Salah Hamouri’s detention and demand his immediate freedom. Raise his case at events and actions for the International Day of Solidarity with the Palestinian People on 29 November.