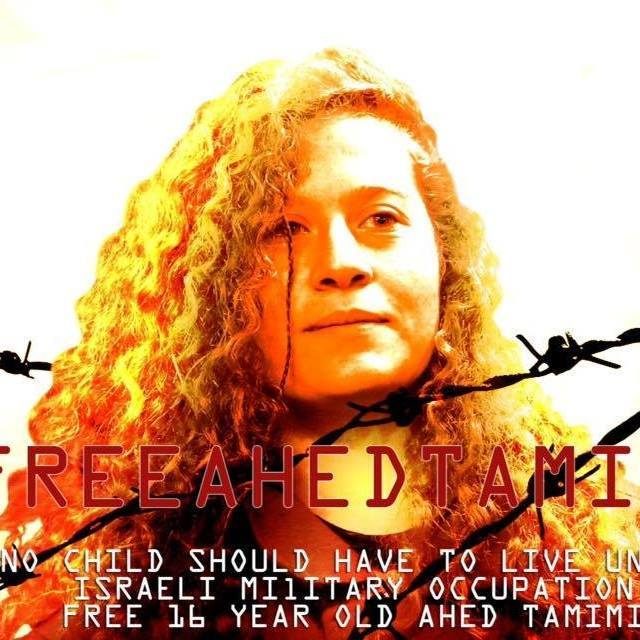 We call for an International Week of Action for Ahed Tamimi and Palestinian political prisoners.
We call on you, citizens, activists, organizations and unions to make a huge statement to our governments around the globe that the tipping point has been reached: We, international civil society, demand action now against Israel’s institutional human rights abuses, especially against Palestinian children.

Let’s stand up for Ahed and all imprisoned Palestinians, by telling our national lawmakers and ministers to act, holding Israel responsible for its crimes. Let’s blow the whistle together from January 10 till 20: Free Ahed al-Tamimi | End Israeli military arrests and abuse of Palestinian Children | End Israeli apartheid and illegal occupation.

What can you do?
1.Send an email to your Members of Parliament and ministers of your government and ask them:
– to condemn Israels practice of child-detention, which is a violation of children’s rights, human rights and international law.
– to speak up for rights of Palestinian children to be guaranteed by the state of Israel and to be respected by it’s military system.
-to condemn Israel’s child abuse and to call the ambassador to account.
– to urge Israeli authorities to release immediately and unconditionally Ahed Tamimi and other political (child) prisoners.

(See a sample letter at the bottom)

Israel is the only country in the world that systematically detains and prosecutes children through military courts, lacking basic due process guarantees. According to Defense for Children International-Palestine, Israel prosecutes 500-700 Palestinian children in military courts annually. At this moment 450 Palestinian children are kept in military prisons by Israel, waiting extensive periods for trial, in lonely cells, ill-treated, intimidated, interrogated, often abused and harassed. We see how 16-year-old Ahed al-Tamimi, who is in jail since her abduction 19 december 2017, is brought to face military judges in shackles. According to Middleeasteye, Israel is implementing a deliberate policy to terrorise Palestinian children to dissuade them from engaging in Palestinian resistance as they grow into adulthood.

Sample Letter to your MP/Minister. Subject:
“The Arrest And Abuse Of Palestinian Children by Israel Has To Stop”

Dear MP / Minister
I am writing this letter to ask for your support in calling for an end to the detention of Palestinian children in Israeli jails, especially Ahed Tamimi who is being persecuted by the Israeli government.

On December 15th, Mohammed Tamimi, 15, has been shot in the head by Israeli Occupation Forces at close range with a rubber-coated metal bullet. Mohammed was in a critical condition and his cousin, Ahed Tamimi, 16, was visibly upset to hear of his injuries.

The same forces who shot Mohammed approached the family home of Ahed an hour later and she slapped the soldiers telling them to leave. This encounter was filmed by her mother and released on social media. The video showed the bravery of a young unarmed activist standing up to two heavily armed Israeli soldiers.

On December 19th, 2017, Ahed Tamimi was arrested by Israeli occupation forces and taken from her home and parents in the middle of the night. Ahed has appeared in military court and has been charged with 12 crimes which sees her facing a jail term of up to 12 years. Military courts are only used to try Palestinians and have a 99.74% conviction rate, so the future looks bleak without our intervention.

I am calling for you to urgently support the immediate release of Ahed Tamimi and for all charges against her to be dropped.

Unfortunately, Ahed’s case is not an isolated incident in Palestine. According to Defense of Children International – Palestine, Israel prosecutes between 500 and 700 children in military courts each year, some as young as 12, and holds on average more than 200 Palestinian children in detention at any given time.
Investigations by United Nations agencies (including UNICEF), Human Rights Watch, Bt’selem, Amnesty International and Defense for Children International – Palestine, have found evidence that:

Since 2016, Israeli authorities have increasingly used solitary confinement for interrogation purposes, a practice amounting to torture under international law.

In 2013, UNICEF released a report titled ‘Children in Israeli military detention: Observations and recommendations’. The report concluded that “ill-treatment of children who come into contact with the military detention system appears to be widespread, systemic and institutionalized throughout the process, from the moment of arrest until the child’s prosecution and eventual conviction and sentencing”.
Regardless of guilt or innocence, children in conflict with the law are entitled to special protections and all process rights under international human rights law and international humanitarian law. Israel agreed to and ratified the International Juvenile Justice Standards in 1991 and these demand that children should only be deprived of their liberty as a last resort, must not be unlawfully or arbitrarily detained, and must not be subjected to torture or other cruel, inhuman or degrading treatment or punishment.

I am calling for you to urgently contact the Israeli Ambassador and hold Israel accountable for its practices of child detention which is a violation of children’s rights, human rights and international law.

Thank you for your attention to this letter and for representing my concerns with the action you will take on behalf of Ahed and all Palestinian child prisoners.