Samidoun Palestinian Prisoner Solidarity Network is reprinting the call below from the Free the Tamimis Campaign. Join the Facebook page for the day of action:  https://www.facebook.com/events/148520499284296/ 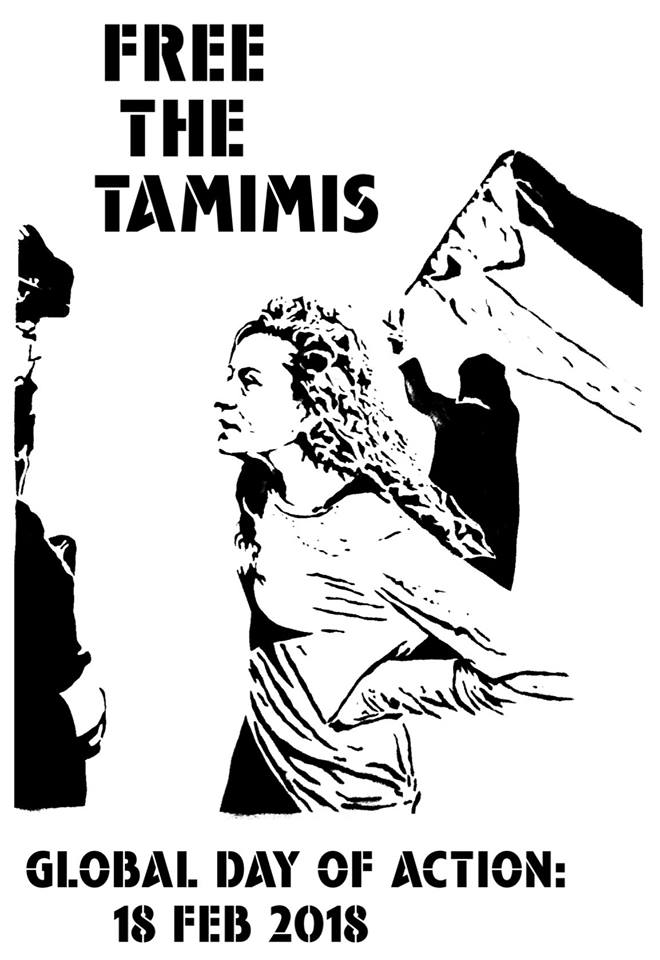 Free the Tamimis Campaign calls on allies, comrades and supporters around the world to protest the ongoing incarceration and systematic targeting of members of the Tamimi family and the village of Nabi Saleh.

On Tuesday the 19th of December 2017, 17 year old Ahed Tamimi was arrested from her family home in Nabi Saleh by the Israeli army under the cover of darkness. Ahed is one of over 300 Palestinian children in Israeli military detention. Her mother, Nariman Tamimi was arrested later on the same day when she went to inquire about her daughter. On Thursday the 11th of January 2018, Mohammad Tamimi, Ahed’s cousin, was arrested from his home in Nabi Saleh. 11 days later, his brother Osama was also arrested on his way home from work. All of them remain incarcerated and have been subjected to sleep deprivation, emotional abuse and inhumane interrogation.

The Tamimi family and the village of Nabi Saleh are targets of a political campaign that aims to crush their resistance to the Israeli settler colonial regime. The Free the Tamimis Campaign calls on Palestine’s allies, comrades and supporters around the world to take action and demand the release of Ahed, Nariman, Mohammad and Osama, as well as all Palestinian prisoners.

What can you do on the 18th of February?

1. Organize marches and sit-ins in front of the Israeli embassies and consulates.
2. Organize vigils in your towns, neighborhoods, and streets.
3. Call and email your political representatives and demand they take action.
4. Take it to social media and use #FreetheTamimis

For inquiries and support to plan your action, please contact falastine@freetamimis.info

Thank you for your support!
Free the Tamimis Campaign.